With grocery store access limited during the pandemic, drone delivery offers a high-tech boost to business 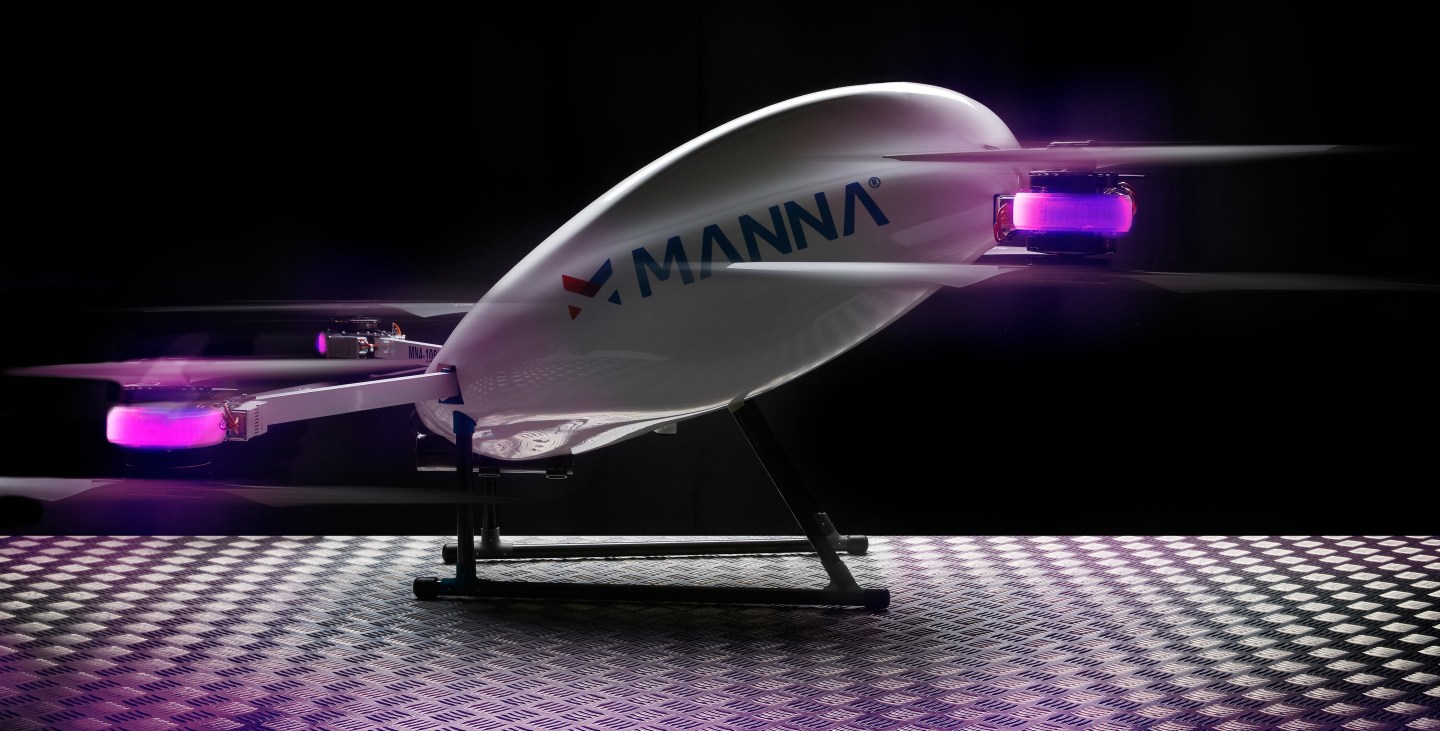 With regulatory hurdles out of the way, Manna moved at lightning speed in the past few months to serve more people than anticipated.
Courtesy of Manna

The suburban town of 10,000 people, located on the west coast of the Emerald Isle, marks one of the biggest tests yet for commercial drone delivery and is proving to be a success story for technology that was once brushed off as a novelty.

Manna’s biggest partner is grocery giant Tesco, but the drone delivery option has turned out to be a boon for local businesses, from mom-and-pop coffee shops to bookstores, as they fight to stay afloat amid the coronavirus pandemic. Manna makes its money by charging customers a couple of euros, which is the same as road-based delivery services. Retailers don’t pay a penny to use it.

“There is an opportunity here that is starting to manifest itself for small local vendors in suburban areas,” Manna founder and CEO Bobby Healy tells Fortune.

While Manna is a startup and used to being nimble, Healy says the pandemic helped expedite the launch in Oranmore and is paving the way for even larger markets as local businesses look to compete with Amazon’s speed and also drive revenue during a challenging business time.

“When you’re dealing with regulators and government and health service executives, we’ve got decisions from those entities that have happened in days that would otherwise maybe take years of lobbying,” Healy says. “We’ve been able to say there are 10,000 people in this town. It’s not good for people to have to go out and do things that should otherwise go through a delivery service. To put that argument forward is a lot easier in COVID times.”

Manna partnered with grocery giant Tesco and now serves an area with 3,000 households, where people have access to more than 20,000 products to be delivered.
Boyd Challenger

Operating in the Oranmore market is a learning experience for Manna, since it allows the drone company to stress test its technology in a town known for its blustery weather. But it’s also proving to be a win for local businesses and residents looking for a convenient and socially distant way to shop.

There are more than 20,000 items available through Manna’s partners, including COVID-19 test kits, the latter of which is exempt from delivery charges. (Frontline medical workers are also enjoying free delivery, with chocolate and coffee being the most popular options.)

Siobhán O’Neill, who has been staying home in Oranmore with her husband and 6-year-old twins, tells Fortune it feels like second nature now to place an order by drone.

“We’ve ordered little bits and pieces,” O’Neill says. “The first time it was to let the kids get the experience. We ordered Thai food from a new restaurant that had opened nearby. The time after that we ordered hot chocolates for the kids and breakfast items.”

Locally owned coffee shop Thomas & Co has been one of the most popular spots for drone delivery. Under current lockdown restrictions in Ireland, the shop is doing only takeaway orders and, prior to partnering with Manna, had never offered delivery. Now its lattes and caffeine are flying through the sky in silent drones moving at 80 miles per hour. Upon reaching their destination, the drones hover and lower customers’ caffeine fixes onto the ground using a biodegradable linen string.

More than 100 orders are placed from businesses around town every day, with the typical journey taking less than three minutes, according to Manna spokesman Richard Forde.

Coffee and treats make up about half of the orders, but people are also using Manna to avoid making quick trips to the grocery store or when they don’t want to wait on Amazon.

“Amazon can take three days to deliver a book in Oranmore, but we can do it in three minutes from a locally owned bookstore,” Healy says. “There’s a new book called Champagne Football, and someone bought it by drone and got it a few minutes after purchase.”

Healy has another favorite example from the anonymized list of purchases he’s seen in Oranmore.

The drones are now becoming a part of everyday life in Oranmore, but O’Neill says the thrill of getting a delivery has yet to wear off on kids and adults.

“Even though we have gotten drone delivery so often over the last few months, all of the neighbors still knock on each other’s doors and say, ‘The drone is coming!’ so the kids and adults can come outside and watch,” she says. “It’s so exciting and impressive to see it coming, especially in the dark.”

The future of drone deliveries

Last month, the Federal Aviation Administration in the United States made one of the most impactful changes to drone laws in recent years by clearing the way for companies to fly at night and over people.

The concessions don’t come without controversy. Drone operators will be required to use Remote ID, which broadcasts the location of a drone and its operator to “address safety, national security, and law enforcement concerns regarding the further integration of these aircraft into the airspace of the United States,” according to the FAA.

With regulatory hurdles out of the way, Manna moved at lightning speed in the past few months to serve more people than anticipated.
Courtesy of Manna

“American communities would not accept this type of surveillance of their deliveries or taxi trips on the road. They should not accept it in the sky,” Wing wrote in the blog post blasting the Remote ID requirement. “Over the next 18 months, we urge the FAA to expand the pathways by which an operator can comply with the FAA’s Remote ID requirements, enabling compliance through broadcast or network technologies.”

Healy, who has built Manna with a privacy-first approach and does not collect tracking data, says he’s confident the new FAA rules can keep privacy at the forefront while also allowing more communities and local businesses to benefit from drone delivery.

He declined to share where Manna’s first market in the United States will be, but an announcement is imminent.

“We’re going to be in the U.S. in the second quarter of this year, and that’s because of what the FAA are doing,” Healy says. “We’re really looking forward to it.”