This startup tried to disrupt infant formula—and ended up with an FDA recall. Here’s how it bounced back 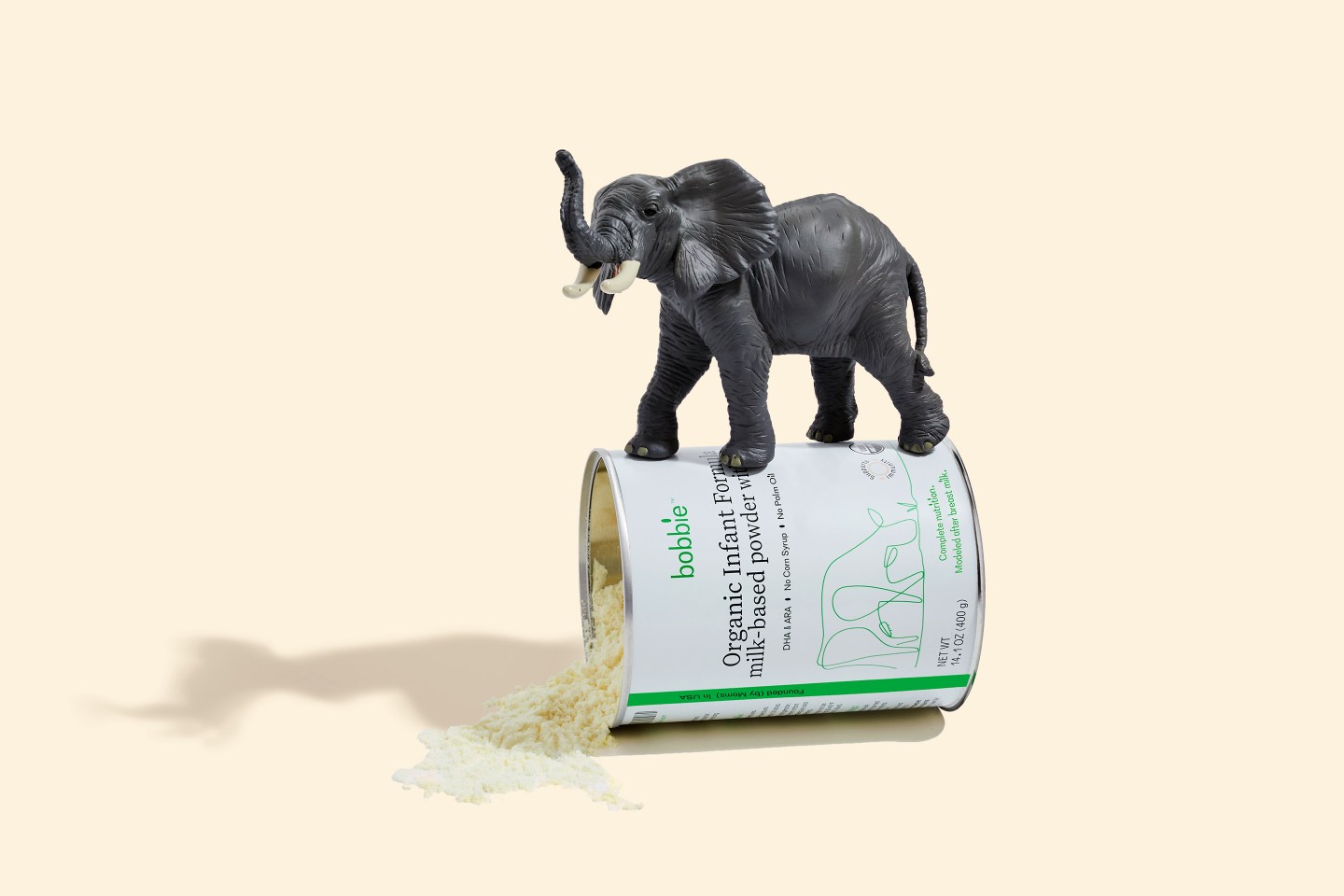 On a June afternoon in 2019, two inspectors from the Food and Drug Administration visited a warehouse in San Francisco.

The uniformed women pulled out of a briefcase a printout of a Fortune story headlined: “Startups disrupted breast pumps. Is infant formula next?” On that piece of paper, they had highlighted every place the words “infant formula” appeared.

The FDA officials were there to speak to the people behind Bobbie, a very small, very new company selling formula. In the 10 days since the launch of the startup’s pilot subscription program serving about 100 Bay Area customers, the company’s founders had been careful to refer to their product on their website and packaging only as “toddler formula” or “companion formula.” However, Fortune’s story—and a few others—discussed the startup as part of the “infant formula” industry.

That was enough to grab the FDA’s attention. The governmental agency closely watches infant formulas, overseeing the product with a keener eye than it does most foods, or even other types of formula aimed at children old enough to also be consuming other foods. All products sold as infant formulas in the United States must meet the requirements of the Infant Formula Act, which include a growth monitoring study for babies who consume the formula, nutrient testing, and food safety rules. Products made outside the U.S. often don’t meet those exact regulations. Bobbie’s offering was made in Germany with European ingredients and was meant to approximate the kind of formula sold in European Union countries. The company was marketing to ingredient-conscious American parents who sometimes buy European-made formula on what Bobbie cofounder Laura Modi calls a “black market” of U.S. distributors.

After the FDA inspectors spoke with the Bobbie team at the warehouse, the startup became, its founders suspect, one of the smallest U.S. companies to ever go through an FDA warning and recall. The then-18-month-old business with fewer than 15 employees called its 100 subscribers, alerting them to the FDA’s warning, and shut down its production. Bobbie’s founders and employees, who had new babies of their own, even stopped using the powder formula themselves. “I’d never felt more vulnerable,” says Modi, the company’s CEO. “I had a moment of feeling like it wasn’t fair…We had a pilot in one city, but we had a national recall.”

Modi says she was taken aback by the FDA’s action because several toddler formulas, companion formulas, and even “nighttime” formulas on the market had not attracted similar FDA scrutiny. The company’s biggest mistake, she says, was focusing on its messaging online and not specifying on the product’s packaging that it was for children “12 months and up,” rather than infants. “It’s hard not to look back now and say, We should have seen it,” says Modi. “It was just a miss.”

It’s not surprising that the FDA reacted cautiously to a Silicon Valley startup attempting to disrupt the formula space. The governmental agency takes seriously its responsibility to ensure children who rely on formula as their sole source of nutrition are fed a healthy, safe product. “When it comes to infant formula, there’s zero room for misinterpretation,” Modi says. Furthermore, the infant formula space in the United States has been dominated for years by just a few large players—Mead Johnson’s Enfamil and Abbott Nutrition’s Similac—with no new infant formula on the market in the past five years.

At the massive companies that produce the kind of baby formulas that dominate drugstore shelves, lawyers and regulatory professionals are responsible for updating the agency on any labeling or ingredient changes—a “pre-market notification” not required for most other food products or supplements. Bobbie, with its skeleton team and mere days of experience serving customers in a 15-mile radius, had no such longstanding relationships by the time the FDA became aware of its new entrant into the space.

For Modi, the startup’s mission was always to provide a safe, healthy alternative for mothers who can’t breastfeed or pump breast milk and don’t want to feed their children the formulas on American shelves; the parents who buy from Europe prefer the region’s lactose, coconut oil, and grass-fed dairy formula to the palm oil, corn syrup, and conventional dairy found in many U.S. products.

Modi, a former Airbnb director of hospitality, came up with the idea when she couldn’t breastfeed her own child. Just as startups like Elvie and Willow have burst onto the scene in the breast pump space, Modi wanted to disrupt formula—a product that has been both pushed on mothers who don’t need it and accompanied by shame for many of those who do. “We are not accepting the realities of feeding your child in today’s world,” Modi told Fortune in 2019. “Fifteen to 20% of women physically cannot produce enough breast milk to exclusively breastfeed.”

Over the year following its FDA wake-up call, Bobbie regrouped. In its messaging to its customers, the company made sure not to cast aspersions on the FDA’s decision. “We accept that our labeling and our marketing may have been misleading, and for that we truly apologize to all of our customers. We anticipated this would be hard, and it should be,” the company wrote in a letter to its subscribers. “When it comes to our kids, safety comes first and every parent deserves peace of mind.”

That messaging caught the eye of a few players who have proved crucial in Bobbie’s second act. The company’s goal had always been to manufacture in the U.S., but the facilities capable of producing infant formula imposed minimum orders that were higher than the early-stage company felt it could commit to. The manufacturer Perrigo, which makes store-brand formulas and pediatric nutrition drinks, had declined a cold email request to make Bobbie’s formula months earlier—even though it was interested in producing a product for millennial parents. “We noticed there was a need for an FDA-regulated product that served consumers’ preference [for an EU-style formula],” says Adriane Sherogan, an executive at Perrigo, which is now producing Bobbie’s formula in Vermont. “What made me reach out to Laura again was the way they handled the FDA advisory; they were very transparent and clear in communications to consumers.”

The recall, too, caught the eye of a new investor, Sara Adler at Wave Capital. Adler knew Modi from Airbnb but decided not to invest in her company’s original $2.4 million seed round—questioning the feasibility of bringing a new formula to market and the demand for such a product. But the company’s handling of the recall won her over. “The level of maturity they brought to their approach to the FDA made it a no-brainer,” Adler says of her eventual decision to invest.

With the confidence of a new manufacturer and a new investor, Bobbie put its resources behind creating a product that wouldn’t draw the ire of the FDA and building goodwill with the agency. Under the guidance of a new head of regulatory, Christina Berberich—who previously handled infant formula regulatory findings at Abbott—the company visited the FDA’s offices in Silver Spring, Md., in November 2019 and spoke to officials about the company’s revamped U.S. supply chain.

The revised and FDA approved infant formula will begin shipping nationally on Jan. 5.
Courtesy of Bobbie

Now Bobbie is set to ship its $24 “European-style recipe” infant formula nationwide starting Jan. 5. This iteration of its formula is considered a different product than the one that led to a consumer warning; that formula “did not return to market,” confirms an FDA spokesperson.

The regulatory challenges are unusual for such a young consumer goods startup. Adler, Bobbie’s new investor, compares the company’s approach to regulators to the model Modi saw at Airbnb, which, while still sometimes working around government restrictions, was more likely in its growth stage to cooperate with regulators than was its frequent point of comparison, Uber. “They could have tried to fight it and continued to sell the product they’d worked to bring to market,” Adler says. “Instead they said, from a business perspective, what’s our long-term goal?”

The 12 employees at Bobbie, who altogether have 19 kids, including six infants, are excited to once again be able to use their own product. Modi and her team believe they’re in a stronger position now than they would have been if they had moved forward with their “companion formula.” “Had they not had the FDA coming to them because of press,” Adler says, “they wouldn’t be where they are now.”