Who will decide the election? It may come down to Pennsylvania seniors 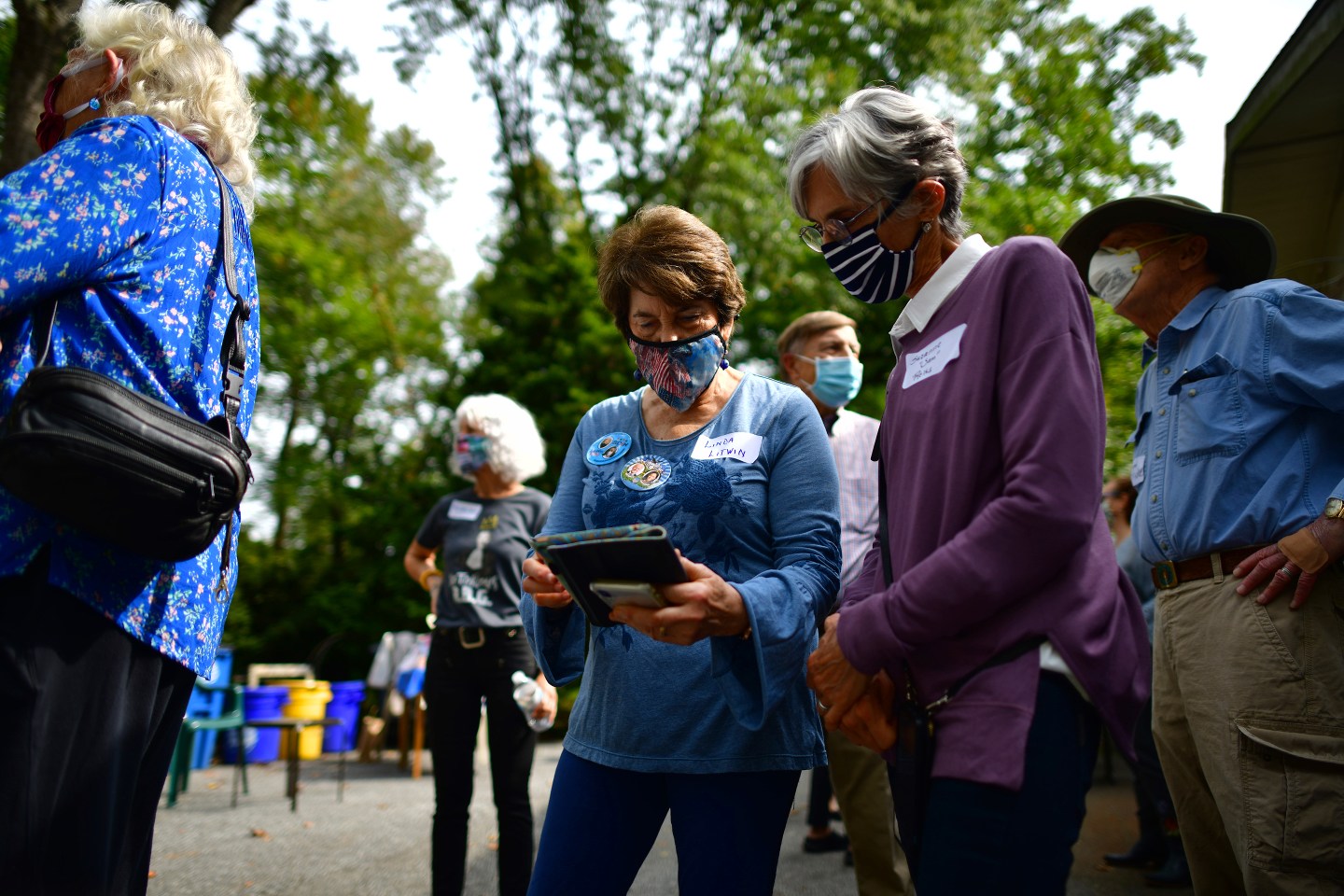 It’s highly possible that a single demographic, in a single swing state, will determine who becomes America’s next President.

That group is the roughly 1.5 million seniors in Pennsylvania likely to vote, a citizenry that went big for Trump in 2016 but is hugely unhappy with his handling of the COVID-19 pandemic. Recent polls show a gray wave toward Biden so gigantic that, right now, he’s expected to carry the 65-and-over crowd by what could equal Trump’s 10 point margin four years ago. “The senior vote is incredibly important in Pennsylvania,” says Christopher Borick, political science professor at Muhlenberg College in Allentown, and director of its Institute of Public Opinion. “The big story of this election is that as a Republican, you can’t afford to lose ground with seniors and expect to win. Trump still has a path to victory, but the loss of seniors presents an overwhelming challenge in the home stretch.”

Put simply, it’s a good bet that one state holds the key to the White House, and that’s the Keystone State. “We’re the tipping state,” says Borick. “If I knew nothing else, and you told me Trump won Pennsylvania on Nov. 4, I’d feel solid he won the presidency.” To carry Pennsylvania and gain a lock on reelection, Trump must make up, ballot for ballot, for the tens of thousands of votes he’ll lose because seniors are swinging to Biden. Hence, Trump will need to rally a red wave in the western oil tier and rural and suburban areas outside of the Philadelphia metro that far surpasses the big numbers he garnered in 2016.

Trump is going all-in on Pennsylvania, blitzing this must-win territory in the final days harder than any other battleground. On Oct. 26 he hosted no fewer than three, hour-plus rallies there that took him from Martinsburg in the south-central rural tier to Allentown in the industrial belt north of Philadelphia. Seniors are a prime target. At every stop, a banner theme was his opponent’s alleged efforts to undermine the two entitlements dearest to the elderly. “[Biden] repeatedly tried to cut Social Security and Medicare…and Bernie Sanders is the one who exposed him on that,” Trump trumpeted in Allentown.

Four years ago, Trump took Pennsylvania by a slender 44,000 votes or 0.76%, the narrowest margin since 1840. The senior bloc formed a cornerstone of his victory. According to exit polls, he carried 54% of the 65-and-over demo, prevailing by roughly 150,000 votes. Seniors are an especially important group in the Keystone State for two reasons. First, of all the battlegrounds, Pennsylvania at 18.6% has a higher proportion of those folks than any state besides Florida (at 20.6%). Second, seniors vote in much bigger numbers than their share of the electorate. “In a presidential election in Pennsylvania, of the entire electorate, 23% or 24% can be seniors,” notes Borick. “That’s why seniors are such a coveted demographic.”

Today, Trump is trailing Biden by a significant margin both in the polls and betting odds. The latest Muhlenberg Institute of Public Opinion survey has Biden ahead by 7 points, 51% to 44%. The RealClearPolitics average of the eight most recent polls puts Biden’s lead at 3.8 points, 49.6% to 45.8%, and Trump’s overall standing on the RealClear roster of six political gaming sites is 35% to Biden’s 64%, meaning the gamblers rate Biden a nearly 2-to-1 favorite. On the PredictIt exchange (not included in the RealClear numbers), Trump’s odds at midday on Oct. 27 were a bit better at 41%. It’s a gauge of the Keystone State’s importance that on PredictIt, his chances in that one battleground mirror his 39% shot at taking the White House. In fact, it’s the ebb and flow in Pennsylvania, more than any other factor, that drive the ups and downs in the President’s odds for reelection.

Though the President is still a long shot in Pennsylvania, his fortunes are improving. On October 21, the day before the second debate, he lagged Biden on PredictIt 68% to 32%, meaning he’s narrowed that gap by 8 points to reach 40%. In RealClear’s collection of polls, he’s climbed from down 7 points on Oct. 13 to the current shortfall of 3.8. “The debate was a positive for the President in Pennsylvania,” says Borick. “He put Biden on the defensive on fracking.” Still, it’s not clear that Biden’s gaffe in calling for an end to the oil and gas industries, and Trump’s manic barnstorming from Allentown to Erie, are enough to compensate for the shocking erosion of support from the seniors who carried him to an historic upset in 2016.

Trump’s in that hole for an overriding reason: What the elderly perceive as his botched handling of the pandemic. In the latest Muhlenberg survey, 20% of respondents said that the most important issue was COVID-19, and 15% cited health care. “The number for COVID is far higher among seniors,” says Borick. “Among that group, Trump gets horrible ratings on his handling of the pandemic. He also gets bad ratings on health care.” In the Muhlenberg poll, 60% of folks 65 or older disapproved of Trump’s performance, versus 34% who approved. Asked if they’ll vote for Trump or Biden, only 39% of seniors picked the President, giving Biden a 20-point advantage. In comparison, voters aged 30 to 64 preferred Trump by 5 points, 50% to 45%. If Trump were polling anywhere close to his 2016 numbers among graying Pennsylvanians, he’d be in a much stronger position to carry the state, and probably a favorite to claim the White House.

To grasp what it would take for Trump to take Pennsylvania, it helps to retrace his path in 2016. Hillary Clinton pretty much matched Barack Obama’s showing in Philadelphia and the metro’s four surrounding counties: Bucks, Chester, Delaware, and Montgomery. She also won handily in Allegheny, home to Pittsburgh, and in Lackawanna and Dauphin, whose respective hubs are Scranton and Harrisburg.

Trump notched his narrow win by getting a huge turnout in the oil-rich southwestern tier that’s been trending heavily Republican in recent elections. He won 65% of the vote in Fayette, Greene, Washington, and Westmoreland counties, beating Clinton’s total by 118,000. That’s 56,000 better than Mitt Romney’s margin in 2012. In addition, Trump flipped Rust Belt icon Erie County, capturing a prize that went to Obama by 19,000 votes in 2012. He scored a stunning reversal in Luzerne, whose base is Wilkes-Barre, winning by 26,000. He also polled a lot better in the Scranton area, narrowing the Democrats’ margin in Lackawanna County to 2,500 from 27,000. Trump unleashed a red onslaught in rural, Rust Belt, and fracking regions that edged Clinton’s strong showing in Philadelphia and Pittsburgh.

All told, 6.11 million Pennsylvanians voted in 2016. In Philadelphia, the four surrounding counties and Pittsburgh’s Allegheny, Clinton won a total of 1.693 million of 2.615 million ballots cast, or 65%. Trump swept 56 of 67 counties, taking 59% of the 3.5 million voters in those chiefly manufacturing, oil patch, and farming regions.

It’s hard to predict what Trump’s senior share will be on Election Day. It’s possible that a number of elders in the industrial or fracking regions that revile the President on COVID might turn on Biden because of his stance on energy, and reluctantly support Trump once again. If Trump’s senior share goes from 54% four years ago to 45%, better than the Muhlenberg poll is forecasting, he’d have a deficit of 135,000 votes versus 2015. Since he won by just 44,000, he’d have to make up just over 90,000 to eke out a win.

Trump can triumph only if the increase in his turnout over 2016 is much greater than the number of Democrats who didn’t vote four years ago but this time post absentee ballots and flock to the polls. If Trump can get an extra 8% of the 3.5 million in the regions that went for him heavily, and again win 60% of their votes, he gains by 170,000 votes over 2016.

But even then, he wins only if Democratic turnout doesn’t rise nearly as much. Borick doesn’t see that happening. He predicts that both Republican and Democratic voters will vote in far bigger numbers than in 2016. “The Republicans are energized by Trump, while the Democrats aren’t excited about Biden but galvanized by opposition to Trump,” he says. Borick doubts that Trump’s extra recruits can exceed a surge in Philadelphia and Pittsburgh suburbanites—folks who yawned in 2016 and stand up for Biden this time—by enough for the President to win. His only path is to recoup some of his losses with seniors, and at the same time marshal a gigantic turnout from his base, says Borick.

“The way he’s antagonized seniors over COVID has blunted his momentum,” says Borick. “The timing of the latest explosion in cases couldn’t be worse for him.” He thinks Trump can still win. “He could do it if he moves just a few points,” he says. “Trump’s energy is there.” Indeed, the Keystone State polls are tightening a bit. If Trump can overcome the revolt of the seniors who supported him so overwhelming four short years ago, he’ll orchestrate a Keystone State surprise even bigger than the last one, and probably get four more years at the address named for that great battleground.