Political cynicism has given way to love in Christian America 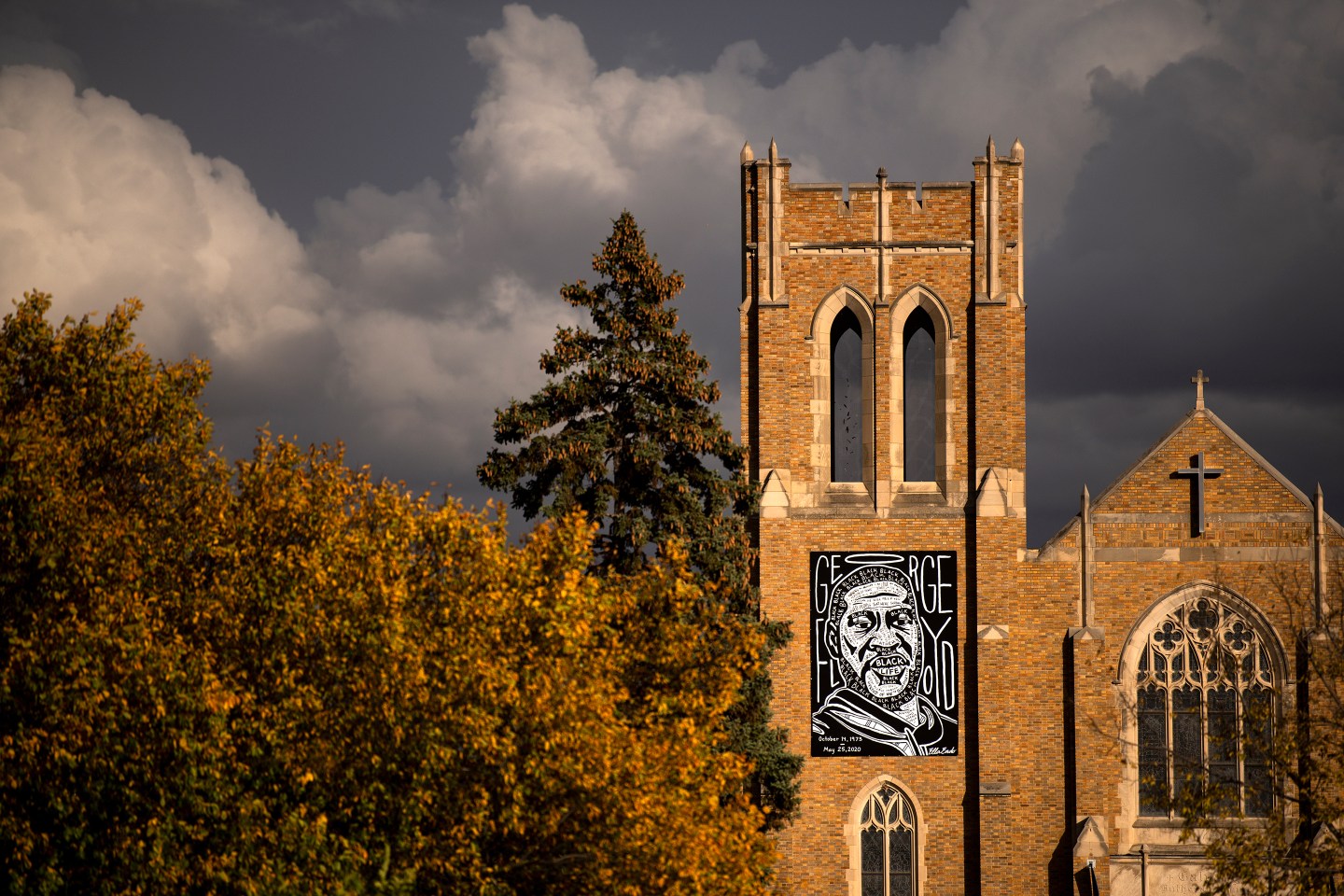 A portrait of George Floyd hangs on the side of Calvary Lutheran Church on Oct. 14, 2020, in Minneapolis. Political cynicism led conservative Christians to vote for Donald Trump in 2016, writes Angela Denker.
Stephen Maturen—Getty Images

Cynicism has been trending in America.

In 2016 Donald Trump appealed to a jaded electorate by suggesting that his propensity to donate to both parties was not a sign of lacking principles but instead an appeal to the lowest common denominator. Everyone could be bought, Trump suggested, even though the businessman himself was still trying to work his way back to the fortune he’d inherited from his father’s vast array of low-rent housing. Unless he shuffled his money around, and maybe got some government funds, Trump couldn’t afford to buy anyone.

For years wealthy Americans had seen Trump as the gilded duck paddling along on a sea of faux-reality prestige. Scratch his gold-plated toilets and find cheap plastic. Look beneath the surface and you’d see him sweating and paddling to outrun tax bills and bankruptcies and vast foreign debt.

Like most of us, Trump’s presentation of himself differed from the man he was in actuality. Instead of Instagram filters he used tax lawyers and shady Russian billionaires and easily manipulated athletes and sports team owners to present an airbrushed profile to a naive world.

All of this was relatively harmless until Trump’s grand delusion came to Washington, a contagion of hatred and cynicism.

I spent 2018 traveling the country, interviewing the voters who’d made a cynical, Trumpian bargain in 2016, most of them conservative Christians. They were cynical for good reason. American Christians had watched their churches and their pastors become big business, just as those same church leaders fell like dominoes in sexual abuse and financial impropriety scandals, many during the years of Trump’s presidency.

These voters told me that they’d watched opioids ravage their blue-collar communities, hills, hollers, and farm fields, while pharmaceutical companies rubbed elbows with regulators and laughed on their way to the shareholders’ meeting. They’d seen local business owners grow wealthier and wealthier as local plants and American companies uprooted for cheap labor in Mexico, Asia, or Central America. They’d heard politicians pay lip service to caring for American families and American children while raiding school budgets to pay for bloated favors to lobbyists and campaign contributors.

They figured if everyone was lying, at least they could elect a liar who claimed he’d lie for them.

Since 2018, I’ve been talking about my research at churches, libraries, and universities, and more recently on Zoom across the globe, mostly in the American South and the Midwest. I also serve as solo pastor of a small-town Lutheran church in the rural Midwest, where Trump won the county by 38 points.

Don’t get me wrong, I still hear a lot of cynicism. But especially given the ravages of the global pandemic, which is currently romping through the heartland and our rural communities, I hear a lot more love. I hear about people making sacrifices to keep our church going: Elderly parishioners join Facebook to watch live-streamed services; farmers share equipment to bring in the harvest; prayers rise up each and every day for anyone in the community who’s suffering and in need of support, including a local family whose teenage son died by suicide, a young boy diagnosed with cancer, and a resident of the local nursing home who tested positive for COVID-19.

As a pastor, my gift and challenge is to dwell deeply with people in times of great joy and times of great sorrow. Early in the pandemic, I led a small, family-only graveside service for a military veteran and farmer. The virus hung in the air, but so did a family’s shared love, and that love overcame the masks and social distance to speak loudly into the void. At root, everyone wanted to be better. Most people want to love each other, not hate each other.

In moments like these—at the graveside, in the hospital room, around the dinner table, riding the combine—cynicism rings hollow. American Christians may have chosen cynicism in 2016, but cynicism is the antithesis of the Christian faith, and cynicism won’t have the final word in America, either.

In ICU wards across America, in family homes where parents facilitate online learning, on factory floors, and in high school band rooms where each player gets their own bubble to play music again, a national cynicism has given way in America to anger, bitterness, hatred, conspiracy theories, and—in a quiet whisper in the back of the room—love.

While we watched our fellow Americans die breathless on ventilators in New York City, and George Floyd struggled for breath beneath a police officer’s knee in Minneapolis, you could feel something else start to die, too, in the heart-wrenching and deadly year of 2020. Every time someone tried to be cynical about COVID-19, sanctity of life sat down quietly next to them and shamed them for their inhumanity: Trump included.

Every time an angry man shouted, “You’re going to vote for someone who kills babies!” millions of American parents, and aunts and uncles and friends and human beings, looked one another in the eyes and made a silent agreement.

We had tried cynicism, and anger, and outrage, and disgust. We decided we weren’t going to listen anymore to the shouting cynics, to the foreign bots in a warehouse overseas paid to inflame our hatred of one another.

We agreed, millions of us, including those who voted for Trump in 2016, that this time we’d tune out the cynicism so that maybe we could hear the love and keep our lives.

Angela Denker is the author of Red State Christians: Understanding the Voters Who Elected Donald Trump and pastor of Grace Lutheran Church in Brownton, Minn. Follow her on Twitter.