Keurig is a machine: How the beverage giant is leveraging A.I. to fuel growth 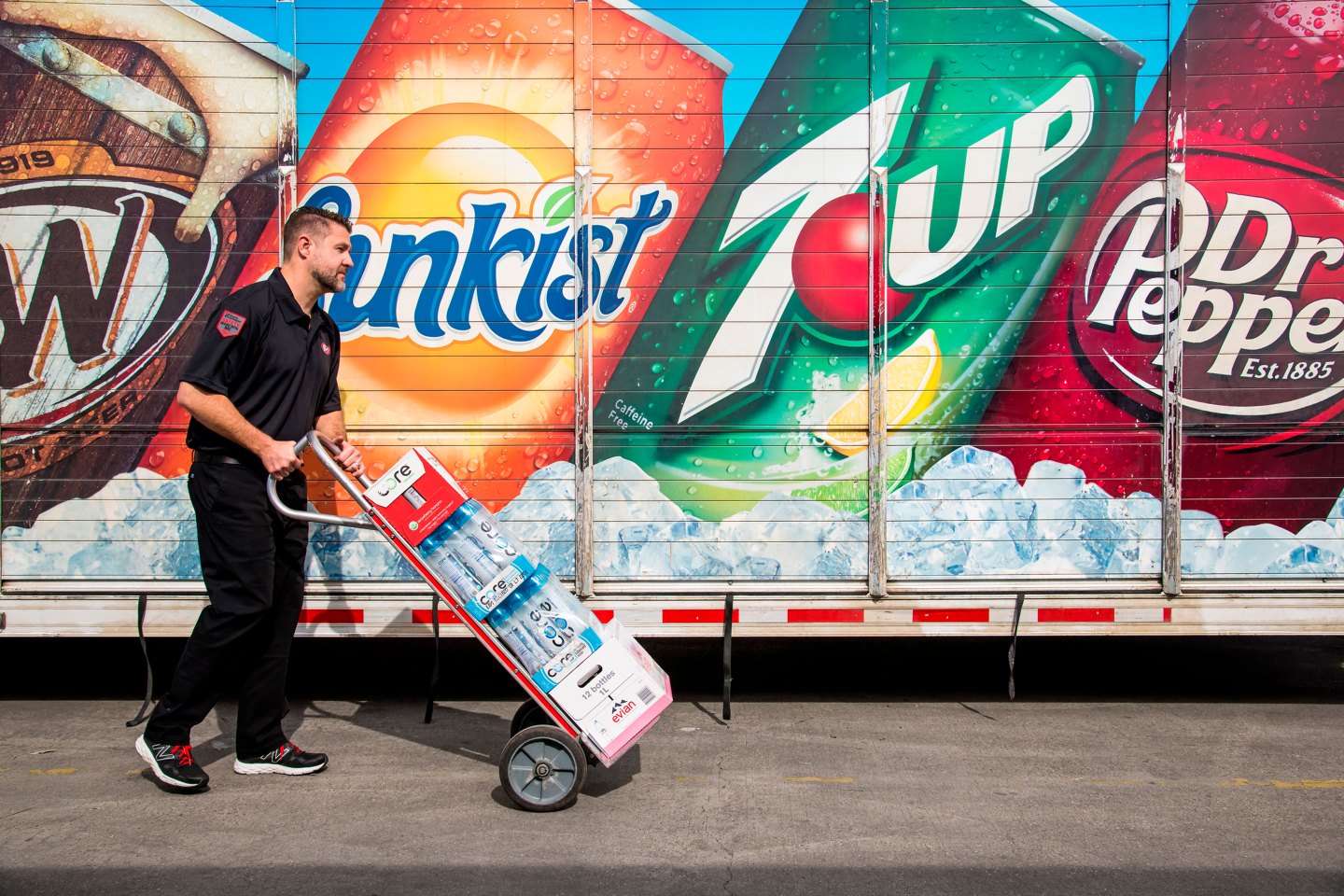 For decades, the worlds of cold and hot beverages in the U.S. have remained separate domains, each dominated by undisputed champions. In carbonated soft drinks, Coca-Cola and PepsiCo have long shared almost three-quarters of the market, while Starbucks has reigned as the place to go for coffee. None of the three stalwarts are even lukewarm about combining hot and cold segments in a big way. But in a beverage market as roiled as every other part of the consumer economy is this year, a surprise winner—little-known Keurig Dr Pepper—is taking gallons of market share.

Though KDP is less than half the size of Coke and Pepsi in U.S. soft drinks, it is running neck and neck with the two giants in the share of the extra cans and bottles thirsty stay-at-home Americans are quaffing versus last year. In the 20-week period ended July 26, KDP has grabbed 34.1% of the $1.4 billion increase in revenue for all U.S. carbonated soft drinks, according to Consumer Edge. That boosted its overall market share from 22.7% to 24.0%. “KDP has done the best job of any beverage company in navigating the crisis,” says Consumer Edge analyst Brett Cooper.

KDP’s rise is especially remarkable because it’s a new enterprise formed just over two years ago via the $18.7 billion merger of coffee purveyor Keurig Green Mountain and soda maker Dr Pepper Snapple. The deal was a giant bet that by assembling and promoting a broad portfolio of classic names and high-growth newcomers in categories much smaller than Coke’s or Pepsi’s colas or Starbucks’ coffee brand, KDP could create a business more powerful than the sum of its parts.

That strategy is the brainchild of KDP’s CEO, Bob Gamgort, an industry lifer who revived two struggling franchises, Pinnacle Foods and Keurig Green Mountain, but whose ultimate dream was building what he bills as “the first modern beverage company.”

“We backed Bob with a total of $17 billion. First, when we bought Keurig and brought him in as CEO, then when we bought Dr Pepper Snapple,” says Olivier Goudet, CEO of JAB, the Luxembourg holding company that has also assembled a coffee empire in Europe. (It’s backed by the Reimanns, one of Germany’s wealthiest families, and along with minority partners holds 44% of KDP’s shares.) “It was all a wager on Bob, because he knew choosing hot or cold was getting only half of the picture. He sees consumer patterns changing before anyone else.”

Over several long phone conversations, Gamgort described his blueprint to Fortune. “The industry viewed beverages much too narrowly,” he says. “Over half of Starbucks’ drinks have ice in them. When someone needs a boost in the afternoon, they may choose a coffee, or a Dr Pepper or our Adrenaline Shoc energy drink. Yet the industry and Wall Street looked at hot and cold as two completely different segments. When we merged, no one got it.” His goal, he explains, was to create the broadest possible lineup. “We need to be as important as possible to a Walmart or Amazon, and we get there by offering a portfolio that meets every consumer need,” says Gamgort, 58.

At $11.1 billion in revenue last year, KDP ranked as the seventh-largest food and beverage company in America. But the company has cornered something that has proved elusive to companies in the best of times, but especially during a pandemic: a broad, diversified portfolio that has churned out predictable earnings. For the first six months of 2020, revenues rose a sturdy 3% to $5.5 billion, while adjusted profits jumped 11.7% to $877 million. By contrast, Coke’s income dropped 15.4% from January to June, and Pepsi earnings were down 6.0% in the two quarters ending in mid-June. While KDP stuck to its earnings guidance, pledging to meet the 3% to 4% revenue and 13% to 15% earnings-per-share targets set in early 2020, the fog of COVID prompted Coke, Starbucks, and most other food and beverage players to declare the market too mercurial to forecast.

Gamgort was gaining on the giants pre-COVID and had a feeling the crisis could work in his favor, but only if the company pivoted fast and accepted that the future would be different and that what consumers wanted was changing, probably for good. “We didn’t think the world would return to normal,” he says. “We forged a blueprint that makes disruption our friend.”

The first signal that we were living in a new world came in early March from KDP’s “connected panels,” the 10,000 at-home brewers linked electronically to its data centers. It was Gamgort who introduced the panels as part of his Keurig Green Mountain rescue plan. The connected brewers read the image of every K-Cup pod to identify the brand and flavor using visual recognition technology, so that KDP sees instantly any change in the daily cups families are drinking, and the names and blends they prefer. “We saw this minute-by-minute data showing people were leaving the cities and sheltering in place and that coffee consumption was through the roof,” says Gamgort. That data from the at-home coffee side also showed what was coming in soft drinks. “We knew few people would be stopping to buy drinks at gas stations or local stores or in restaurants,” says Gamgort. He immediately anticipated that in the stay-at-home economy, families would be stockpiling soda by purchasing where they could buy big quantities in a single trip, at the megastores such as Walmart and Kroger.

Cases of Diet 7UP cans in production at Keurig Dr Pepper’s facility in Irving, Texas.
Michael Riddell—Courtesy of KDRP

“We predicted they’d want big packs of cans, because they’re easiest to store in the garage,” says Gamgort. “Cans stay fresher than bottles, and the kids and adults can pull out a can at a time.” The rub was that Gamgort saw no way his domestic can suppliers could possibly make enough of them. Miraculously, the Mexican government declared beer a nonessential product, shuttering factories and leaving the local canmakers with loads of capacity. “We pounced on that opportunity,” recalls Gamgort. “We told the producers in Mexico, ‘We’ll take all the cans you can give us.’ Competitors ran out of cans. We got the cans.”

KDP ramped up production of 12-packs of cardboard-bound 12-ounce cans and cut back on bottles. KDP employs a direct-store-delivery or DSD model, meaning that in three-quarters of the nation, KDP’s 6,000 trucks deliver shipments from 160 distribution centers directly to stores as varied as a 7-Eleven to a Kroger. Then, a KDP merchandiser wheels a “U-boat” cart carrying the brands to the beverage aisle and personally stocks the shelves. The merchandisers often visit a big store several times a week for three or four hours. They transmit up-to-the-minute updates on what’s selling and how fast to KDP’s data centers. “If you just ship to the retailer’s warehouse, you don’t get that kind of data and don’t realize for another week what’s selling. By then it’s too late,” says Gamgort.

Other trends were emerging too. Demand for classics such as Canada Dry ginger ale and A&W root beer took off. “We cranked up the bestsellers and made a lot less of the slower moving varieties,” says Holand Lujan, who heads KDP’s distribution network in the South. Factories cut way back on Cherry 7 Up and Diet Squirt. But the swing to big sellers made the merchandisers more productive. The pallets that used to contain 55 separate items were carrying as few as 15, in much bigger quantities, cutting the time required to stock shelves.

Coffee followed the same pattern. The company’s Keurig brewers are the bargain “razor” sold near breakeven to lure customers to the lucrative “blades,” KDP’s K-Cup pods. KDP produces an estimated 10 billion-plus pods a year, an astounding 82% of the total market. It buys and grinds the coffee, fills the pods, and distributes to stores both for brands it owns, led by Green Mountain and Original Donut Shop, and under some two dozen names it licenses, among them McDonald’s McCafé, Newman’s Own, and Krispy Kreme (it also packs the pods for Starbucks and Dunkin’ Donuts). Once Gamgort saw customer pod usage spike, “I turned our factories to maximum output, way in advance of retail orders. We were watching inventories build when we hadn’t seen any sales yet.” The connected brewers also showed that people were drinking much more premium coffee, perhaps because when you’re not getting a $3 cup at Starbucks, you’re fine spending 70¢ on a gourmet K-Cup. Once again, KDP greatly increased production of such staples as Green Mountain, and temporarily halted production in niche brands. At the peak, at-home K-Cup pod sales were running 30% higher than last year, an extraordinary number for a product that grows in the mid–single digits.

The question now for the self-professed challenger is how to achieve strong growth in two slow-to-modestly expanding businesses. So far, KDP has managed to translate revenues waxing at around 3% into adjusted earnings gains in the 15% range. But it’s generating those outsize leaps in profits chiefly by lowering expenses and reaping big savings from the merger. When cost cutting runs its course by the close of 2021, Gamgort will need to garner much higher revenue growth. “He wants sales growth of 5% to 6% a year, not the couple of points a year that are the norm in the business,” says Paul Michaels, a KDP director and former global president of Mars, where he was Gamgort’s boss and mentor in the 2000s.

In beverages, that’s a high bar. It’s likely that KDP will give back at least part of the big 1%-plus gain in market share that its jackrabbit moves won in the pandemic, something Wall Street anticipates as evidenced by the stock’s flatline performance over the past year.

But looking ahead, Gamgort has several things working in his favor. First, starting around 2021 KDP will have retired enough debt that it can use its formidable free cash flow for acquisitions. Gamgort proved to be a master at purchasing and growing brands in the past; he built Mars’ pet food franchise to rival Ralston Purina’s through acquisition of Greenies and other names and revitalized Pinnacle’s tired portfolio with a move into healthy frozen foods via the purchases of Birds Eye vegetables, Evol natural meals, and Gardein, maker of plant-based protein foods.

We forged a blueprint that makes disruption our friend.

Second, Gamgort recognized that getting Keurig brewers in more households was what growing K-Cup pods was all about. He sharply cut the prices of the cups and machines, taking a temporary hit to sales to lure more customers, and in the process doubled the number of U.S. homes with brewers to the current 31 million, representing about one household in four. That leaves plenty of room to run: In Europe, over 50% of all homes have brewers. Here, the changes in customer tastes in the pandemic are likely to stick.

The fourth lever is called Allied Brands, which acquires names typically owned by entrepreneurs or private players (think Adrenaline Shoc, a sports drink invented by beverage legend Lance Collins, or Don’t Quit! protein shakes from Jake “Body by Jake” Steinfeld). In the past, the old Dr Pepper Snapple would distribute such brands but didn’t secure the rights to buy them if they took off, and would often lose out to Coke or another big bidder. Once again, Gamgort broke the mold. He’ll offer to make a new beverage an Allied Brand only if the owner agrees to give KDP the right to purchase it based on a predetermined formula.

But perhaps the best thing Gamgort has going for him is that he’s embracing—rather than dreading—the uncertainty that lies ahead. “Our rivals are rolling over and hoping that the status quo returns, and it’s not returning,” he says. That paradigm-busting audacity has given KDP the biggest caffeine buzz in beverages.

A version of this article appears in the November 2020 issue of Fortune with the headline, “Keurig is a machine.”