A.I. gets down in the dirt as precision agriculture takes off 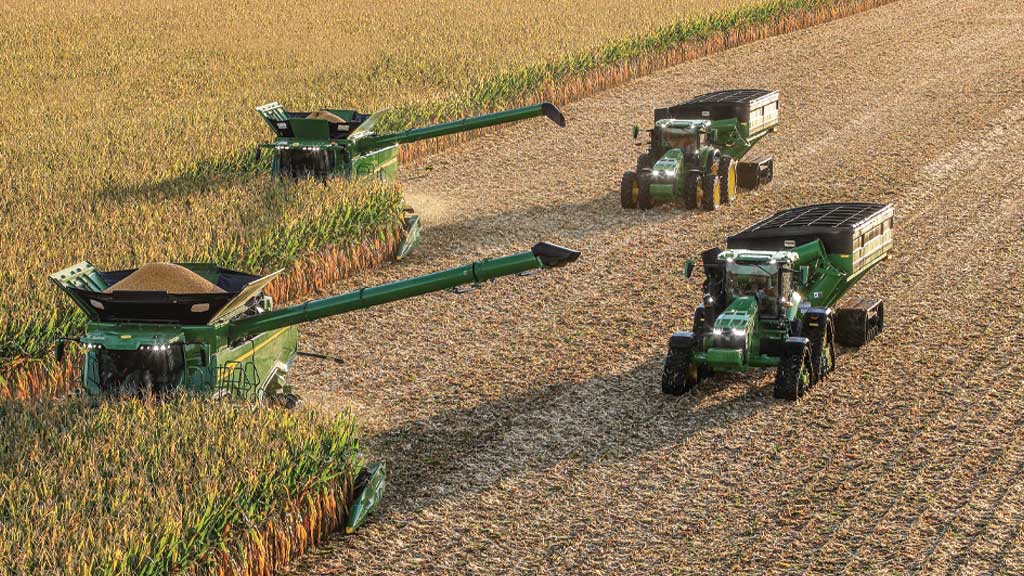 In recent weeks, farmers across the Midwest have begun harvesting millions of acres of corn, soybeans, and other fall crops. As tractors and combines crisscross the fields, the farm sector faces tough times because of low prices, a consequence of the COVID-19 pandemic’s hit to restaurants, hotels, and other big food buyers.

Some farmers have turned to a high-tech solution for improving yields and reducing costs. For example, harvesting combines introduced this year by Deere & Co. include high-resolution cameras and sensors linked to A.I. software.

The system monitors grain as it’s collected and adjusts dozens of settings on the combine in real-time to maximize how much grain is chopped from each stalk and to minimize waste. An X9, as the new machine is called, can harvest a field 45% faster than Deere’s older equipment lacking the automated system and it uses 20% less fuel.

“Historically, those settings were a bit of an art form for the farmer to maximize the grain going into the combine,” Deere’s chief technology officer, Jahmy Hindman, says. “It takes the burden of having to manage a lot of different things on the combine from the operator. And we can do a better job.”

The improvements couldn’t come at a better time for the agricultural sector, which has been dealing with droughts and other harsh weather conditions due to climate change, escalating trade wars between the U.S. and China, as well as declining demand for their crops due to the pandemic. Widespread use of precision agriculture methods could reduce farming costs by $100 billion while saving 180 billion cubic meters of water by 2030, according to a McKinsey study done for the World Economic Forum. Using data crunching and A.I. analysis could increase farmer incomes by another $70 billion by 2030, the study found.

So far, the tech battle is largely between established ag giants like Deere and Bayer’s Monsanto, and startups backed by venture capital. Three years ago, Deere bought machine-learning startup Blue River Technology for $305 million to accelerate its efforts.

But the tech giants are stirring. Microsoft, for one, has been increasingly pushing into agriculture, and struck up a wide-ranging partnership this summer with farming collective Land O’Lakes covering data collection and analysis using Microsoft’s Azure cloud service.

Still, technology may not be a panacea for the hard-pressed farming sector. Some once-promising areas, like using robots to pick fruit or autonomous drones to monitor fields for drought or pests, have not panned out as quickly as expected. The technologies haven’t improved as quickly as expected and remain expensive.

That hasn’t deterred Deere from adding a host of A.I.-driven features to further its push into precision agriculture. In addition to smart harvesting combines, the company is also developing technology using cameras to inspect individual plants and weeds in a field to modulate the amount of fertilizer and pesticides applied based on need. Called “See & Spray,” the feature should arrive next year and could reduce the use of herbicides by 40% to 50% in some applications, analysts at Morgan Stanley noted in a report earlier this year.

For Steve Pitstick, an Illinois farmer with 2,500 acres of corn and soybeans, Deere’s harvest-sensing technology could be exactly what he needs. Pitstick, who has been farming for more than 40 years, has seen vast changes in equipment. Where harvesting gear once ran at just three miles per hour over 10-foot wide patches of a field, it now rides twice as fast and harvests up to 60-foot wide swathes.

“You have a lot of things coming at you and you just can’t react fast enough,” while driving the harvester, he says. “I’d love to let the machine do it.”

Pitstick started testing the equipment this year, but he knows not every new technology will prove worthy.

“We’ve experimented with just about everything that’s out there if it looks like it could be a game changer,” he says. “Some things work out, some don’t.”

Big farms using expensive tractors—an X9 can cost $800,000 or more—aren’t the only ones using A.I. Farmers in search of a cheaper technology are turning to seven-year-old startup Ceres Imaging. The company sells its irrigation, pest, and nutrient analysis as a service to hundreds of orchards, vineyards, and farms for as little as $4 per acre per year.

It’s not offering the same kind of real-time, continual analysis as more expensive strategies. Instead, on a weekly or monthly basis, Ceres flies planes loaded with high-resolution imaging equipment over customers’ fields (the idea was sparked when founder and CEO Ashwin Madgavkar saw a NASA spectral imaging sensor in action while in grad school at Stanford University). A.I. computer-vision software reviews the aerial images and overlays information about which areas may need more or less water, fertilizer, or other resources.

Red and yellow shading can indicate problems; healthier areas appear in blue and green. Farmers can review the images on a mobile phone or laptop, using the guidance to cut back on unnecessary applications of fertilizer, for example. That saves money and helps protect the environment.

“Climate change and sustainability are big challenges for farmers globally,” Madgavkar says. “We see this as a technology which can help all farmers.”

California’s world-leading almond industry is a major customer, as almond trees require large amounts of water, which has been in short supply in recent years. A Ceres image of one customer’s fields highlights parts of an orchard in yellow where irrigation equipment may have clogged or broken down, Madgavkar explains.

“We do this by looking at different wave lengths of light and applying computer vision and A.I. models to it,” he says. “Those patterns tell me there’s something wrong with the plumbing. The drip tape that’s installed here often malfunctions.”

Some companies are taking a much more radical approach that relies even more heavily on A.I. algorithms and machine learning.

Five-year old startup Bowery Farming, based in New York, is building vast indoor farms where every aspect of the growing conditions, from temperature and humidity to the amount and type of light, can be controlled. The farms are replete with sensors, including A.I.-backed cameras, that monitor crops in real-time, allowing the system to make changes to growing conditions.

So far, Bowery has built three large farms and focused on producing leafy greens and fresh herbs for supermarket chains like Whole Foods and Stop & Shop. Each farm serves only its local area, ensuring the produce stays fresh and minimizing the cost and environmental impact of shipping long distances.

But the plan is to expand into all kinds of produce, from tomatoes and peppers to berries and potatoes, and build indoor farms all over the world. It’s not economically viable for massive crops like corn or soybeans, however.

As the company expands, the machine-learning system should gain more and richer data to draw on for controlling the crops and improving yields, CEO Irving Fain says.

“As we’re learning and improving and iterating, our farming operation continues to improve,” Fain says. “The A.I. and software are critical components as the network itself gets smarter and smarter.”