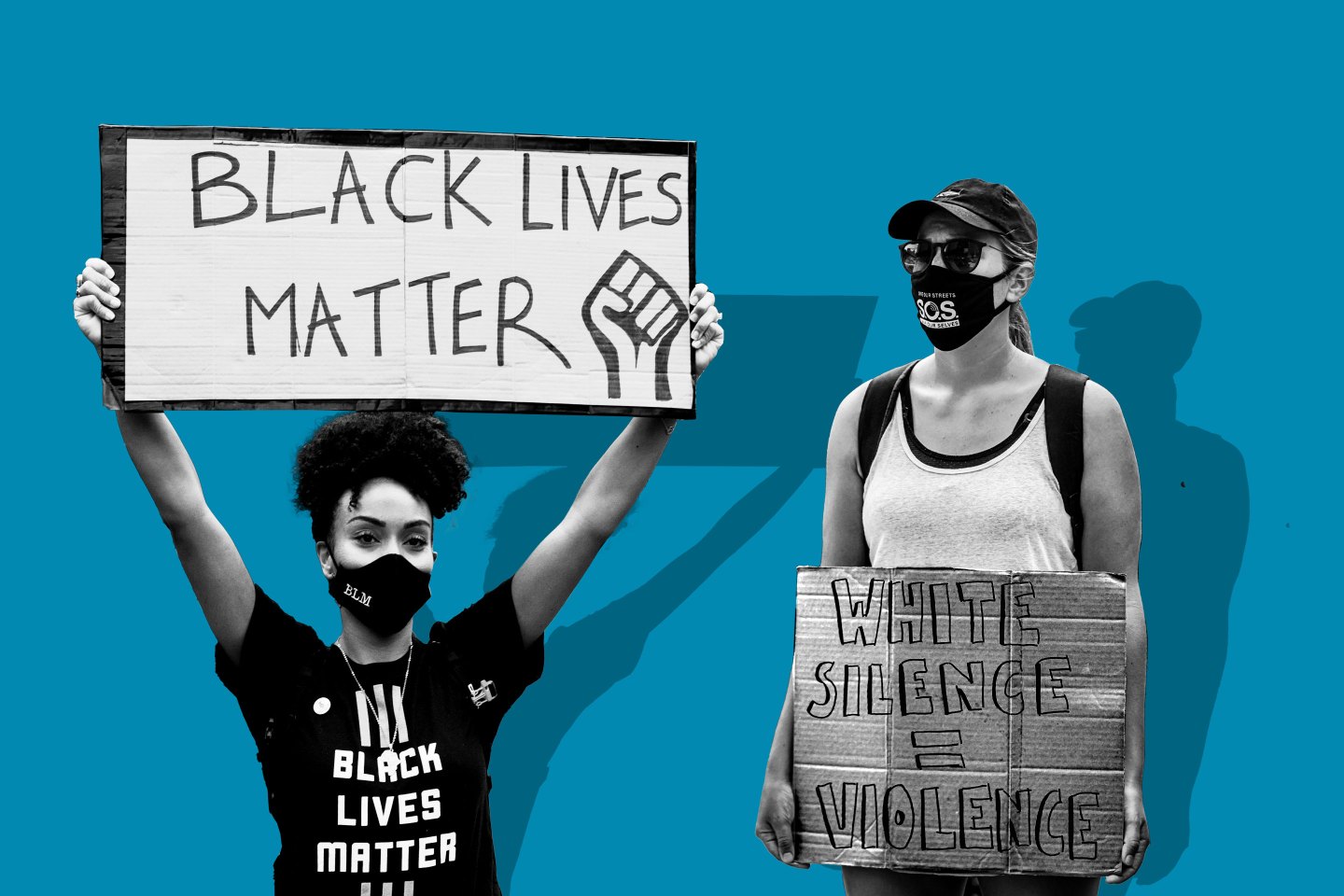 Protesters hold placards with anti-racism messages during the Million People March demonstration in London, Britain, Aug. 30, 2020. Hundreds of demonstrators took to the streets of west London on Sunday in the Million People March to protest against systemic racism in the UK. (Photo by Ray Tang/Xinhua via Getty) (Xinhua/Ray Tang via Getty Images) A participant holding a White Silence = Violence sign at the protest. Gays Against Guns (GAG), the direct action, gun violence prevention group formed by members of LGBTQ communities and allies, held a day of action protest in New York Citys Union Square to call attention to the violent, bloody cycle of death that Americans are witnessing on a constant repeat setting: The Cycle of Death that has emerged at the nexus of white supremacist policing, the Black Lives Matter movement, the Alt-Right, white supremacist militia movement, and American gun culture. (Photo by Erik McGregor/LightRocket via Getty Images)
Photo-Illustration by Fortune; Original photos:Ray Tang—Xinhua via Getty images; Erik McGregor—LightRocket via Getty Images

Following the death of George Floyd and subsequent protests, donations have poured into Black-led organizations and groups dedicated to racial equity. The Black Lives Matter Global Network Foundation, for example, received more than 1.1 million individual donations in the month after Floyd’s death. Higher Heights for America, which works to build the political power of Black women, said that it experienced 10 times its regular number of donations over a two-week period following the Floyd tragedy.

This wave of funding is much needed. For too long, organizations supporting Black lives have been unable to generate as much funding as white-led organizations. Now, there finally seems to be the recognition that this gap is real—and deeply problematic.

I’m hopeful that this marks a turning point in philanthropy. In January, I became the first Black leader of the Mississippi Center for Justice, which opened its doors in 2003. Every day, we fight to dismantle systemic racism and bolster policies that treat all people fairly, regardless of the color of their skin. We, like many Black-led organizations around the country, are up against deeply ingrained racist systems—and need funding to keep up the fight.

The funding gap between Black-led organizations and white-led organizations is clear—and alarming. One study of more than 140 nonprofits found that white-led groups had budgets that were 24% larger than those led by people of color. Groups led by Black women received less money than those run by white women and Black men. And the unrestricted net assets (donations that can be used for any purpose) of Black-led groups were a whopping 76% smaller than those of white-led groups.

There are many reasons for this. For one, many donations are based on connections. Leaders of color traditionally have fewer relationships with influential organizations and people. And breaking into the philanthropy community is difficult because new leaders often lack the bandwidth and experience to cultivate relationships with potential funders.

New leaders are also generally stretched thin adjusting to internal challenges—such as staffing and funding deficits—and lack the resources to engage in necessary outreach. In a study of nonprofit executives conducted by the Building Movement Project, half of executive directors and CEOs of color reported a “lack of relationships with funding sources,” compared to 33% of their white counterparts.

This funding gap is also fueled by racial biases—whether intentional or not. And the vast majority of family foundations don’t use diversity, equity, and inclusion strategies and goals to guide their giving.

As a result, Black-led organizations need to devote more time and energy to generating funding. Every minute spent on that means less time and resources toward fighting for the causes we’re trying to help. And if we’re making less of an impact, that means groups and individuals are less likely to donate.

The challenges don’t stop there. My organization, like so many others, faces a difficult reality: We are a local group asking for funding in a fundamentally conservative state. People in progressive cities donate to their local organizations and well-known national groups. But it’s difficult to get such funders to donate to a group in another state. It’s a sad irony, given that Mississippi is one of the states most in need of progressive allyship and policies. We rank as one of the worst in health, life spans, education, and more.

At long last, sufficient funding is finally starting to come to Black-led organizations. We must keep this up—and ensure that all groups fighting for racial equity have the resources they need to make a difference. America, as the protests die down, don’t forget we must continue equitable and inclusive philanthropy. And yes, that means directing support to Black-led social justice organizations.

Vangela M. Wade is president and CEO of the Mississippi Center for Justice, a nonprofit, public interest law firm committed to advancing racial and economic justice.