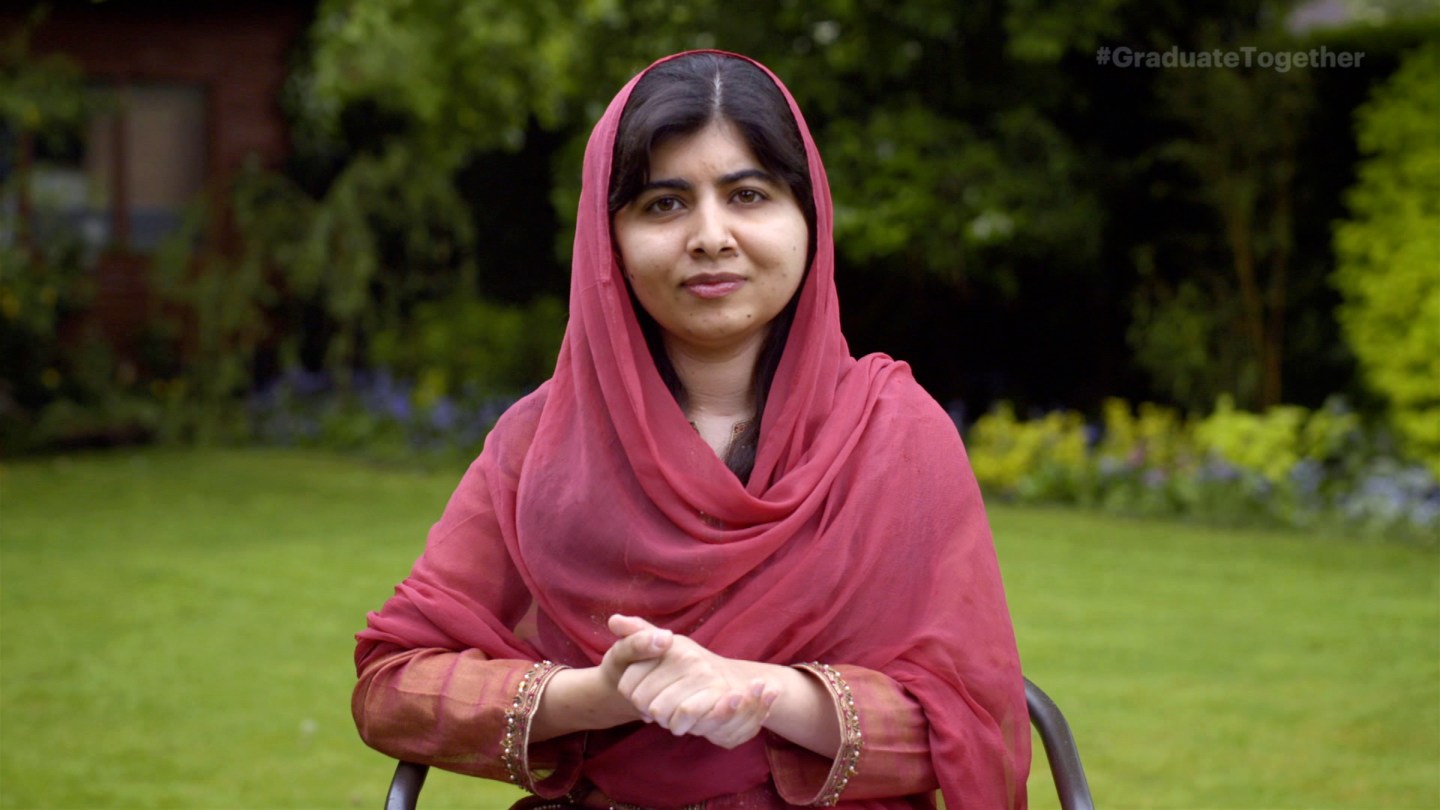 Malala Yousafzai speaks during Graduate Together: America Honors the High School Class of 2020 on May 16, 2020.
Getty Images for EIF&XQ

Good morning, Broadsheet readers! Oracle wants to be a “trusted technology partner” for TikTok, Dana Canedy aims for innovation at Simon & Schuster, and Malala helps put the trials of remote school in perspective. Have a thoughtful Tuesday.

– Back-to-school blues. This back-to-school season has been like no other. In my household, it has led to more chaos than I would like to admit. Between Zoom meetings and writing deadlines, I once again find myself fielding questions about long division and rectangles and explaining to my 9-year-old why a 10-minute recess isn’t the right time to start making popsicles.

But while it’s been challenging, my children and the vast majority of kids in the United States will go back to the classroom at some point in the near future. Meanwhile, many others across the globe won’t be so lucky. The pandemic is expected to hit girls particularly hard. According to a report from the Malala Fund, which was issued last spring and updated in July, 20 million secondary school-aged girls could find themselves permanently out of an education even after the pandemic has passed.

I interviewed Malala Yousafzai, the Pakistani activist known for cofounding her eponymous nonprofit, last week. According to Yousafzai, the recent report used data from the Ebola epidemic that started in parts of Africa in 2014 to come up with an estimate for how COVID could impact girls’ education. There are several reasons why girls are disproportionately impacted by school closures, starting with early marriages and teen pregnancies. (An aside: My own grandmother, the oldest of 13 children, was born and raised in a small town in Morocco, never went to school and was married at age 14.)

“School is a safe place for them, not just a place of learning,” Yousafzai said of the role education plays in girls’ lives.

This isn’t an isolated problem, but one that ultimately impacts all of us. “Education is the best way to protect ourselves from future crises,” says the activist, who graduated from Britain’s Oxford University in June of this year. “When girls go to school, economies grow and public health improves.” In other words: If we let 20 million girls stop going to school, we will be worse off when the next global catastrophe hits.

The good news is that the Malala Fund and its partners are working to mitigate some of the current challenges to girls’ learning. Through its Education Champion Network, the nonprofit organization is investing in initiatives like the Orenda Project, an app that enables digital learning for school-aged children across Pakistan, developed by entrepreneur Haroon Yasin. The Malala Fund has also partnered with Pluralsight, a Utah-based online learning platform, for both a financial and product grant, in part to make sure that both initiatives and the nonprofits behind them are well-equipped to navigate a virtual environment.

“[The pandemic] is forcing an acceleration of digital transformation among nonprofits,” Lindsey Kneuven, chief impact officer at Pluralsight, told me. “We are helping to equip [the Malala Fund and its champions] with the tech they need.”

The limitations of our current reality have hit Yousafzai personally too. When I asked her what has been the hardest adjustment, she said it was finishing her final year of college remotely. “We were sent back home for the Easter holiday and never returned,” says the recent grad. “I had to take my exams and do my graduation at home.” You can read my full Q&A with Yousafzai here.

Just a few days after interviewing Yousafzai, I got an email from my 9-year-old’s Bay Area school library. “Your student has requested the following book,” it said. The tome of choice? Yousafzai’s 2017 picture book, Malala’s Magic Pencil. Sure, this meant a parent had to mask up and go get it, since kids are still not allowed on our school campus. But what an amazing world I live in: My child’s curiosity, sparked by an interview I did with one of the most influential activists of our lifetime, can be fed with the click of a button, even in this time of COVID and catastrophe. If only every girl could have this kind of access to an education.

- In opposition. Svetlana Tikhanovskaya, the opposition leader who fled Belarus after President Alexander Lukashenko claimed another victory despite election results that were not in his favor, writes in a Washington Post op-ed that his quarter-century regime is "a giant with feet of clay. What appeared to be destined for eternity will be gone in a blink of an eye." A related Atlantic piece examines the role of women as protest movement leaders.

- Lasting legacy. Philanthropist Susan Sandler announced a $200 million commitment to racial justice organizations focused on the South and Southwest. Sandler faces a brain cancer diagnosis, and wrote in her announcement that she was "grateful that I’ve been given the time since my cancer diagnosis to establish [my legacy]. I urge each of you not to wait to work on establishing yours." New York Times

- Party don't start 'til Oracle walks in. Why does an Oracle-TikTok deal look like? The company led by CEO Safra Catz pitched owner ByteDance on a role as a "trusted technology partner," rather than a full sale of U.S. operations. Now the businesses await the Trump administration's verdict. CNBC

- Smashing stigma. After a lawsuit claimed that former SoulCycle CEO Melanie Whelan said that "paternity leave is for pussies" (Whelan hasn't responded to the claim), Reddit founder and husband of Serena Williams Alexis Ohanian decided to write a piece in defense of parental leave's importance. He says that "now is the time to eliminate the stigma associated with paternity leave, once and for all." (And on Twitter, he called Whelan's alleged comment "pathetic.")

- Open book. Dana Canedy, the new publisher of Simon & Schuster, has challenged her staff to make 2020 a "year of innovation" for the publishing house. And she says there's more interest than ever in the company's flagship products. "There's only so much Netflix you can watch," Canedy says of staying home during the pandemic. "People are reading more, they’re reading alongside their children." Bloomberg

- In overdrive. Has the pandemic made mom-shaming worse than ever? As parents compare who has put their kids back in in-person school and who has chosen to stay at home, judgment of others' decisions is magnified to a new degree. New York Times

- Topping the charts. Billboard introduced a new global chart, for the first time tracking songs' popularity worldwide, largely based on streaming. The artist who leads the list's debut? Cardi B. Bloomberg

Parents who double as essential workers are struggling more than ever. Here are their stories BuzzFeed

"I suddenly realized that I had the power to walk away."