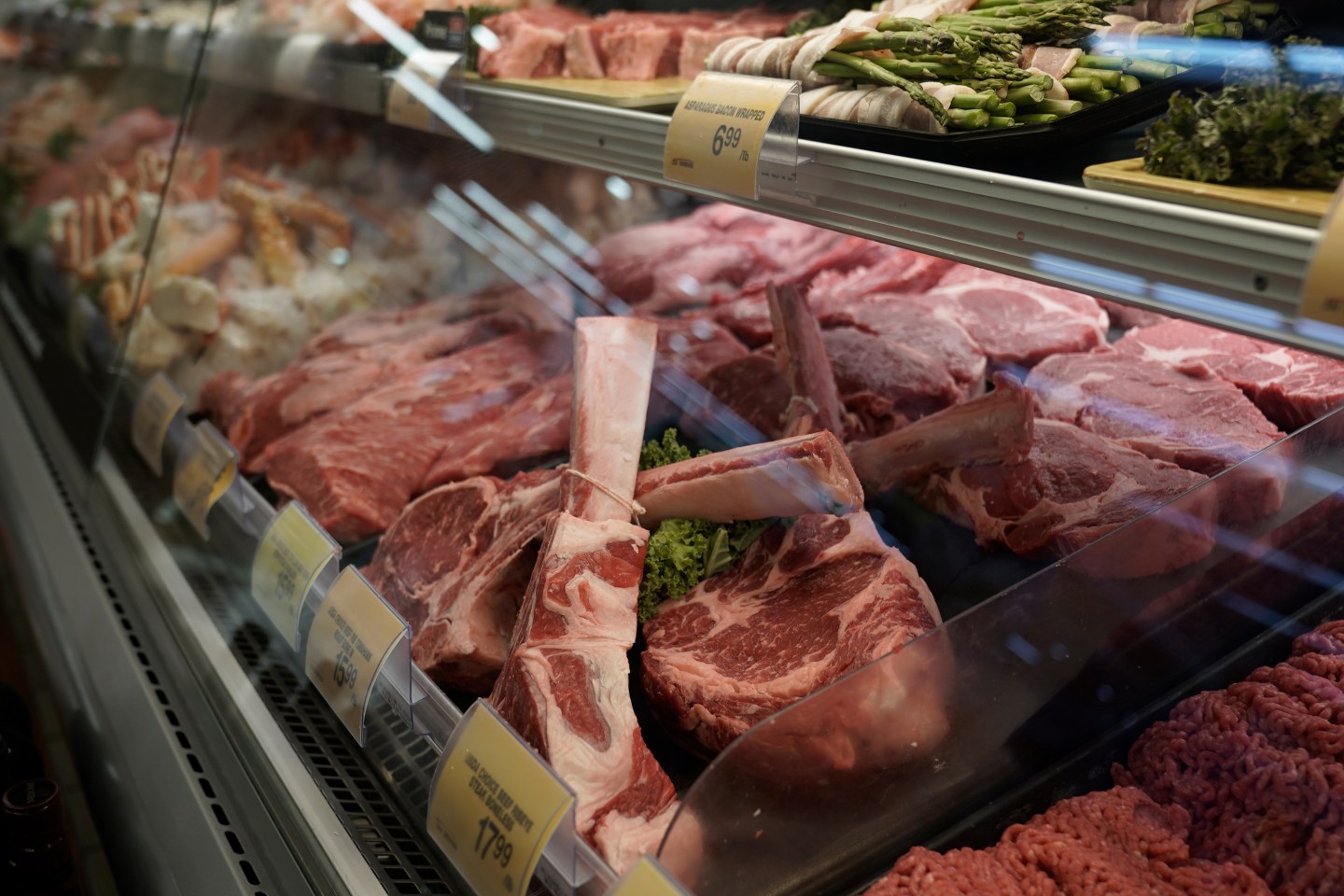 Cuts of beef in the meat section of an Albertsons grocery store in San Diego on June 22, 2020. With Mike Pence accusing Kamala Harris of trying to take meat away, Paul Shapiro examines the role of meat shortages in elections.
Bing Guan—Bloomberg/Getty Images

The Trump campaign has yet to figure out the best line of attack on Sen. Kamala Harris: Is she a left-wing extremist or a snub to the progressive wing of the Democratic Party?

In throwing the kitchen sink at the California senator, Vice President Mike Pence recently tried out some red meat on a crowd of ranchers, warning them that Harris wants to take their meat away. “We’re not going to let Joe Biden and Kamala Harris cut America’s meat!” Pence declared to the ranchers’ adoration.

Pence was referring to then-Presidential candidate Harris’s assertion that we should consider the environmental effects of our food choices. But in a time when we’ve experienced an actual pandemic-induced meat shortage along with an executive order aimed at keeping slaughtering plants open, the idea of meat availability playing a role in the election isn’t so farfetched.

In fact, it’s happened before.

During World War II, Americans became accustomed to meat rationing as part of the effort to support the troops abroad. When the war ended, the country was obviously flying high after its victory over Germany and Japan, but the problem of meat availability remained.

Wartime government-induced price ceilings on meat meant that many farmers simply chose not to produce for fear of losing money, but Americans were willing to endure the less-meat diet out of a shared desire to defeat the Axis enemies.

When the war ended, however, those ceilings were lifted, and unsurprisingly the price of meat skyrocketed. In the midst of the 1946 midterm elections, President Harry Truman, trying to save the Democratic Party, moved to enforce price ceilings again, but this time without the ability to rely on patriotism to encourage farmers to produce meat for untenably low prices.

As Time’s Emelyn Rude wrote in 2016 of the postwar incident, “Miners declared they could not work without more meat and began striking in Washington. Hospitals stirred scandal by claiming they could only find horsemeat to serve their sick patients. The lines outside the butcher shops still in operation stretched for blocks and provoked shoving and scratching amongst the patrons.”

The country was on edge. Time itself even editorialized on the topic, blaming what it called the “widespread meat famine” directly on Truman. Congressional Democrats begged the President to do something about the meat crisis, declaring it the single biggest issue of concern to their constituents. The Republicans, just like Pence today, campaigned on a pro-meat message.

“Got enough meat?” asked Rep. John Vorys, a Republican from Ohio, in a campaign speech, a slogan which quickly came to be an election rallying cry. Rep. Sam Rayburn even dubbed the midterm election of 1946 the “beefsteak election,” and in substantial part owing to the perception of a meat shortage, Democrats lost control of both chambers of Congress.

Today, another meat shortage has coincided with an important election. But unlike in 1946, our nation in 2020 is better prepared to withstand a scarcity of animal protein. Today, our response to the temporary closing of slaughter plants can be a permanent opening of our dietary habits to actual plants.

Already, fast food chains are offering plant-based burgers that routinely wow the most inveterate carnivores, including newspaper food writers. Meat giants themselves are now the purveyors of plant-based meat, with companies like Cargill selling their plant-based chicken even in China. Others like Perdue Farms are offering blended products that are hybrids of both animal and plant proteins, lowering the ecological footprint of the food while helping meat go much further. (My startup, The Better Meat Co., enables meat companies to hybridize their animal meats with plant protein ingredients, and we provide plant-based ingredients to Perdue.)

Such a world—where we can essentially have our meat and eat it too—would have been a dream come true for President Truman and congressional Democrats in the mid-1940s. Today, Joe Biden and Democrats can rest assured that thanks to advances in food technology enabling us to produce meaty foods with less reliance on animals, Americans will be able to satiate our meat tooth all we want. And in addition to helping during the pandemic, plant-based meats also have the advantage of being better for the planet and animals, and having zero cholesterol, too.

Our nation has faced meat shortages in the past. While it may be laughable to think that Kamala Harris wants such an outcome again, we should just be glad that unlike in Truman’s day, we now have far more options, and diversifying our protein sources is good for us anyway.

Paul Shapiro is the author of Clean Meat: How Growing Meat Without Animals Will Revolutionize Dinner and the World and the CEO of The Better Meat Co.