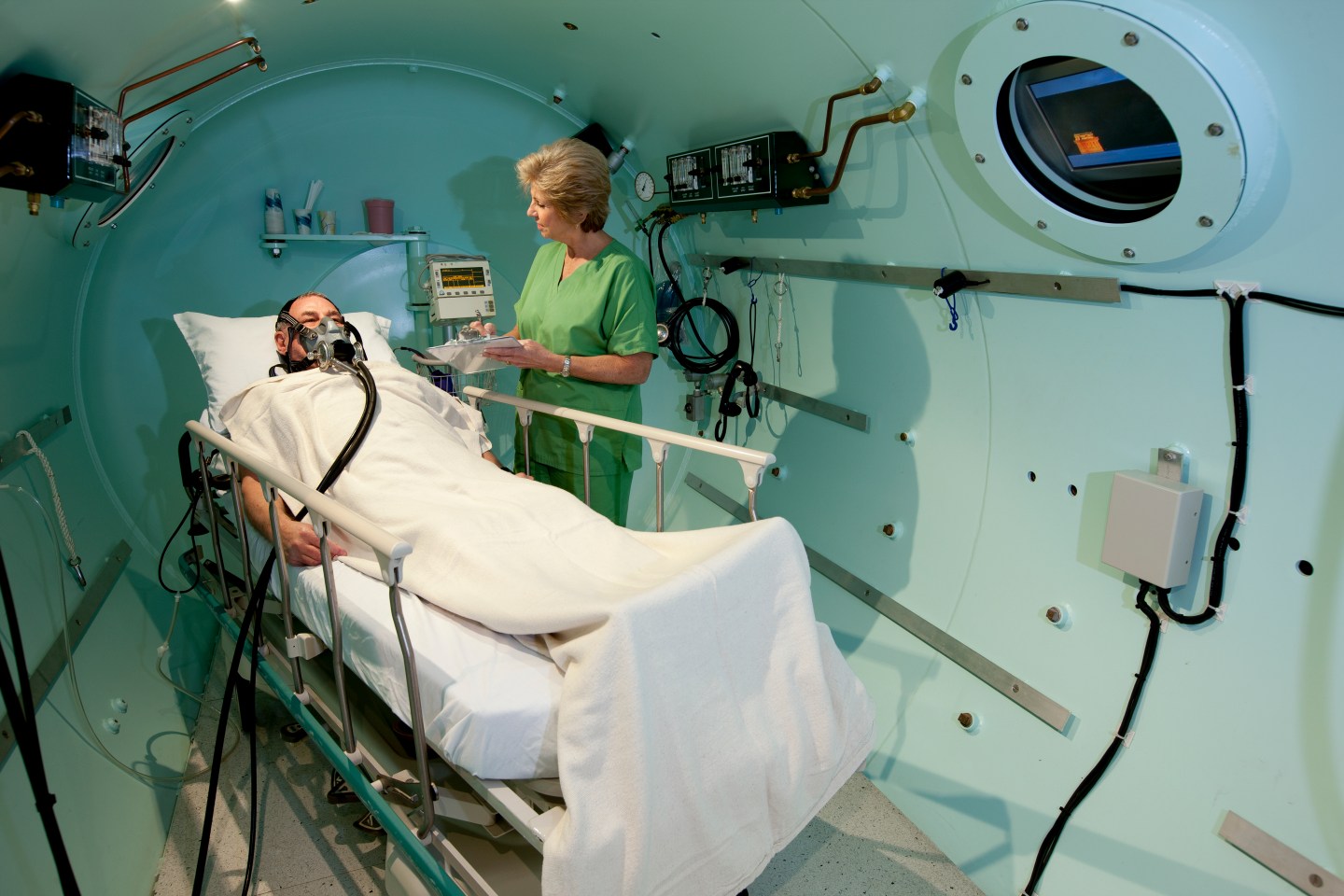 In a world full of acronyms—NASA, scuba, and, yes, COVID, among others—it may seem imponderable that one of the most well-known has gone largely unmentioned during discussions of the novel coronavirus. I mean, how could HBO get left behind?

The answer is both complicated and promising. But at its heart is this: As it pertains to the virus, HBO is most certainly not something you can find with your remote.

Rather, we’re talking about the acronym for a treatment that we’ve used for nearly a century to address various maladies: hyperbaric oxygen, or HBO in the medical shorthand. And although the research is still young, the early results from HBO’s use on COVID-19 patients range from encouraging to surprisingly strong.

Despite this, we’ve heard very little about hyperbaric oxygen and its apparent ability to help patients fight some of the virus’s effects. I review volumes of medical literature each week, and even I was surprised to discover how little there was on this topic until it appeared in a physician chat group recently.

A little about the basics: During HBO treatment, a patient is placed in a sealed single- or multi-person chamber, where high levels of oxygen are delivered to the lungs, and then absorbed into the bloodstream under pressure. This is very similar to what happens when a scuba diver breathes oxygen from a tank at depth—more oxygen enters the tissues. And HBO has been found over the years to advance healing and successfully treat a variety of conditions, including burns, soft-tissue infections, and chronic wounds. It has a long track record of safety.

So what’s the COVID connection? As we know, patients with coronavirus often develop pneumonia or respiratory issues, and in severe cases oxygen levels can plummet, sometimes precipitously. Rather than place patients on a ventilator, where mortality rates can be quite high, one option may be to employ HBO therapy earlier in the patient’s course, in hope of improving their oxygenation enough to avoid mechanical ventilation altogether.

There are likely additional benefits. In both animal and human studies, HBO has been shown to reduce inflammation and inhibit cytokine synthesis, which could prove critical if it helps to mitigate the deadly cytokine storm of the immune system that can cause multi-organ injury in some COVID-19 patients.

Because the Food and Drug Administration has not granted emergency authorization for HBO treatment in COVID-19, some physicians are bravely using the chambers “off-label” to treat small numbers of patients—and, anecdotally at least, they appear to be having some success. At the Christus Shreveport-Bossier Health System, more than 20 moderately or severely ill patients underwent HBO therapy, and the majority of them went home with good outcomes. “Our medical staff embraced this, and we haven’t looked back,” said Dr. Susan Kemp, medical director of the Christus Hyperbaric and Wound Care Center. “The patients all tell me they don’t feel like they have to work to breathe in the chamber. They don’t want to get out!” Kemp added that HBO is not a stand-alone therapy, “so we are being purposeful in patient selection for those who we feel are not responding to other treatments.”

Published studies in Wuhan, China, and at Opelousas General Health System in Louisiana also reported very promising results, with five critically ill patients treated in each case, all of whom experienced improvements by multiple criteria. In the largest study, to be published this month by the Undersea and Hyperbaric Medical Society, doctors at NYU Winthrop Hospital gave 20 patients (aged 30 to 79) a maximum of five HBO treatments, then compared them to similar patients who did not receive such treatments. In follow-ups with the HBO group, only one-third as many needed a ventilator, less than half as many died, and fewer remained hospitalized compared to the control group. These are astounding results.

“It’s possible that hyperbaric oxygen therapy could cut the mortality of COVID-19 by more than half,” coauthor Dr. David Lee told me in an email exchange. “But our study was small, and funding is needed for a larger, multicenter randomized clinical trial.”

I second that—and the sooner the better. Still, we’ve seen significant headlines generated by other possible COVID treatments that had far less going for them. Why has HBO attracted so little attention?

One reason may be that not too many hospitals possess HBO “dive chambers,” as they’re called, where they can treat patients emergently; only about 130 of the 1,400 hyperbaric centers in the U.S have these capabilities. This also is a labor-intensive process that requires transporting sick people back and forth from an ICU to a chamber multiple times for treatment. Infection control certainly may be a concern.

But don’t discount another possibility: This therapy has nothing to do with Big Pharma, which funds and drives most of the research and treatment in medicine—and dominates the news cycles and mass-media advertising. HBO therapy is really just heavy-duty oxygen treatment; there are no drugs involved, so the pharmaceutical industry doesn’t profit. Without Big Pharma’s support, securing attention and funding for HBO trials can be a real challenge.

If it were me lying sick with COVID-19, I would choose HBO treatments, with their long history of safety, over a mechanical ventilator. Still, with the limited data we have, we cannot draw broad medical conclusions. As Dr. Davut Savaser, hyperbaric and emergency physician at UC San Diego Health, observed, “We must rely on producing a gold standard of randomized control trials that will definitively demonstrate a benefit that we can hang our stethoscopes on.”

Amen. In the meantime, keep an eye on the acronym you didn’t see coming. It could be HBO to the rescue.

Carolyn Barber is a 25-year emergency department physician, cofounder of the homeless work program Wheels of Change, and a nationally published author.