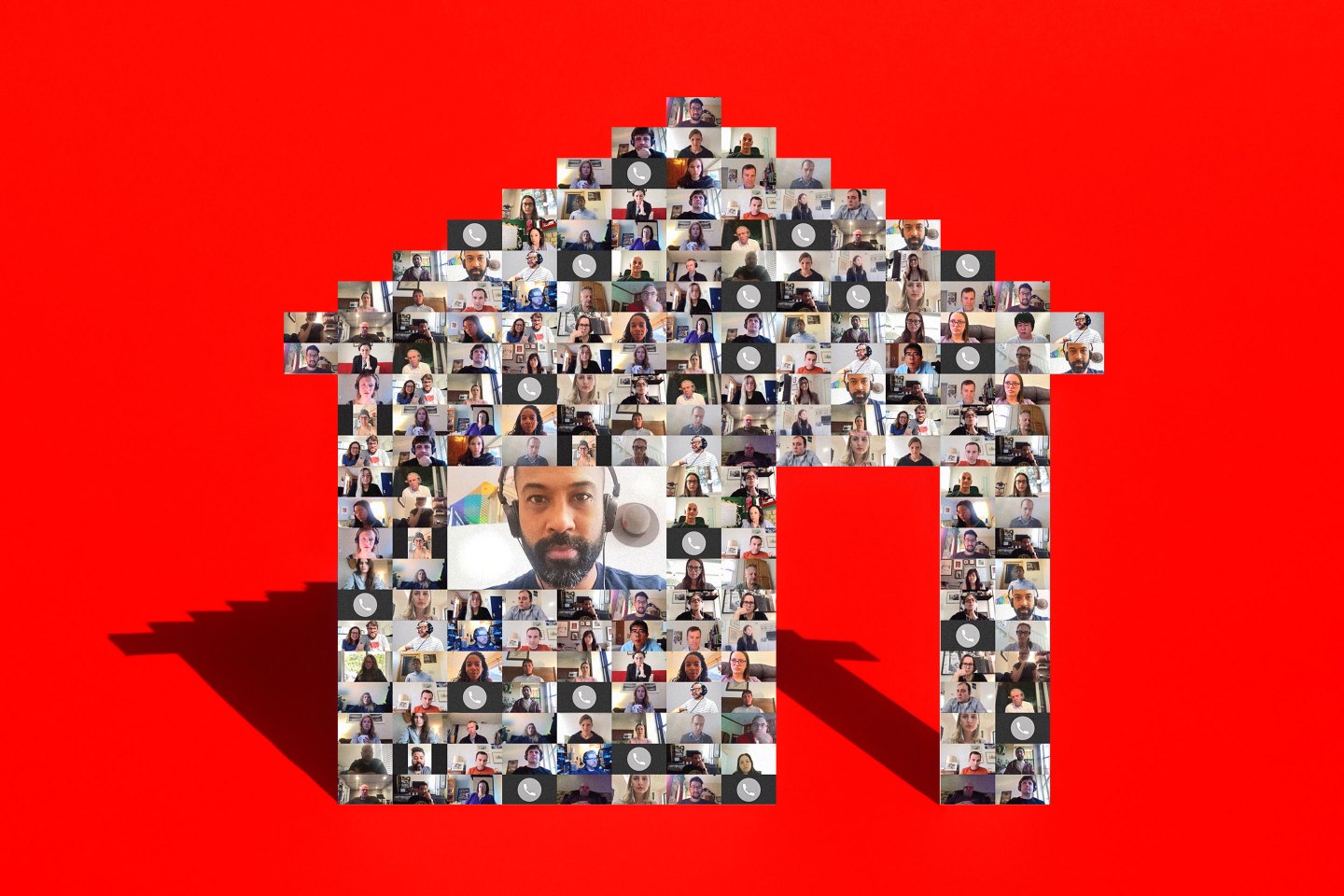 In a time of social distancing and remote work, Goldman Sachs CEO David Solomon raised a surprising topic during his latest earnings call with Wall Street analysts: togetherness. “Our firm has always had a team-oriented apprenticeship culture, and we benefit from being and working together,” he explained. While many CEOs seem in no hurry to refill their office buildings, and several have told employees they need never return to the office, Solomon made it clear that he wants his colleagues back in the office as soon as is safely possible. He himself has never stopped going to the office through the pandemic.

Solomon’s desire to bring his employees back together physically even as the coronavirus continues to rage around the globe, particularly in the U.S., isn’t rooted in any simple calculation of efficiency. Facebook, Fujitsu, Nationwide, Otis, Siemens, Twitter, and other major companies have announced that large portions of their workforces may or must work remotely from now on. It saves money and may increase productivity, managers say. Many employees prefer it. A recent survey by Korn Ferry found that 64% of workers feel that they’re more productive at home.

But a group of hyper-successful contrarians—Apple, Amazon, Goldman, Google, and others—have pointedly not offered the indefinite-WFH option. They want employees back physically together. Considerable evidence supports their stance. It also shows that when employers offer indefinite WFH, they’re messing with something more powerful than they may realize.

Allowing or requiring employees to leave the workplace was clearly the right thing to do when the pandemic arrived, and for many companies it will remain the right thing for some time to protect the health of their people. Google, acknowledging the likely timing of vaccine development and distribution, recently extended its voluntary WFH policy until July 2021. Some closings are imperative for public health. But employers who have a choice should keep in mind that the costs of WFH are high and may not be obvious.

The stiffest penalty may be lost creativity and innovation. Every company is desperate for good ideas in this environment, and it would be hard to design a worse policy for finding them than unnecessarily requiring or encouraging employees to stay apart.

In one of the most revealing studies of creativity in the workplace to date, researchers from MIT, Northeastern University, University of Cologne, University of Bamberg, and Aalto University studied several teams working on projects involving computer science, economics, psychology, and other fields; their findings were published in the International Journal of Organisational Design and Engineering in 2012. The subjects wore small badges called sociometers to record interactions within the teams, and the creativity and quality of the teams’ ideas were rated by peers on a scale of one to five. The results show strikingly what a deeply human experience it is to be creative in a group. The more that group members faced each other, the more creative was their output. The more they looked into each other’s eyes, the more creative they were. The more willing they were to confide in one another, the more creative they were.

Facing each other, looking into the eyes, confiding—all those behaviors reflect and build trust. The researchers measured trust within the groups and found that it was crucial to the whole process. Their conclusion: “There is no substitute for face-to-face interaction to build up this trust.”

Those high-achieving contrarian employers have understood all this for years. For example, Google’s free top-quality cafeteria meals aren’t merely a perk. They’re a way to bring together employees who might otherwise never see each other, and to make them wait in lines, where they’ll talk. Long, narrow cafeteria tables increase the odds of sitting next to or across from—and thus talking with—strangers. Such chance interactions are where successful innovations often originate. Gmail, Google News, and Street View came from engineers chatting at lunch.

Apple’s Steve Jobs obsessed over face-to-face meetings. “There’s a temptation in our networked age to think that ideas can be developed by email and iChat,” he told Walter Isaacson, author of a bestselling Jobs biography. “That’s crazy. Creativity comes from spontaneous meetings, from random discussions.” When asked by Fortune to recount the birth of the iPhone, Jobs said the earliest ideas arose from informal gabbing: “We all had cell phones. We just hated them, they were so awful to use.” That “watercooler talk” is the “one part of the iPhone mythology that everyone tends to agree on,” author Brian Merchant reports in his book The One Device.

But with today’s technology, does optimal interaction really have to be in person? Won’t a Zoom meeting work almost as well? No, it won’t. We are hardwired from our development as humans to value the physical presence of others. It’s deeper than most of us think.

Consider something we’re not supposed to do now: shaking hands. Job applicants who shake hands get rated more highly by evaluators than those who don’t, even when everything else about them is the same. We judge people who shake hands to be more trustworthy and more competent than those who don’t. Shaking hands is literally an electric experience: Brain imaging shows that we energize the region associated with reward sensitivity—that is, we feel rewarded—by shaking hands, or merely by seeing other people shake.

There is a similar physical response when we converse with someone face-to-face. The pupils of our eyes constrict and dilate in parallel with the other person’s. Neither of us is aware it’s happening, but it builds trust. When we’re physically together, we unconsciously mimic one another’s posture, gestures, and tone of voice, which builds trust and empathy.

Video is far inferior. Posture and gestures are partly or entirely invisible. People never look each other in the eye; they can’t look directly into the screen and the camera simultaneously. In video meetings, you can’t turn from one person to face another; everyone is facing the camera. Natural conversational responding, turn-taking, and interrupting become maddeningly awkward.

Togetherness is in our deepest nature. “Natural selection mandated us to be in groups in order to survive,” Michael S. Gazzaniga, a leading researcher in cognitive neuroscience, has written. Reached recently at his home—his office at the University of California at Santa Barbara is closed—he’s feeling the loss of physical presence with others. “In the academic world I get a sense that the excitement and enthusiasm one can gin up on an intellectual question is harder to sustain,” he says. “It’s humanity influencing the rational thing, and it gets lost on Zoom.”

Much of the most revealing work on team performance in the past decade has been conducted by MIT’s Alex Pentland, who developed the sociometer badges mentioned earlier. Asked what’s being lost as millions of workers remain at home, he says: “The feeling of connection and being a member of a team, and all the incidental conversations and nonlinguistic cues that get people on the same page and aligned, as well as the serendipity that is the source of most innovation.”

His outlook for organizations and their people: “Completely standardized tasks work well. You can rely on existing social ties to align people for a while. But that is expiring about end of summer.”

Companies adopting large-scale indefinite work-from-home policies will certainly save some money—an important consideration now—and they may get along just fine for quite a while. The downside will accumulate only slowly and will be harder to appreciate fully. What these companies gain can be quantified much more easily than what they lose. But while they may take time to show up on the P&L, the losses could be much greater.

Physical presence is by far the best foundation for creativity and innovation. But when it isn’t possible, teams can still up their game.

Members of the most effective and innovative teams continually connect with people outside their discipline, industry, or location, getting truly new perspectives and ideas. Then they and the rest of the team exchange what they’ve heard.

2. Pay attention to how much everybody talks

In meetings of the most effective teams, in person or on video, no one dominates. That practice maximizes interaction and gets lots of ideas on the table.

3. Get physically together at least once if you can

That’s how trusted relationships and group social norms get established. Research shows that digital interactions can then reinforce them.

A version of this article appears in the August/September 2020 issue of Fortune with the headline “Losing connection.”