Why China’s catastrophic floods will barely dent its economy 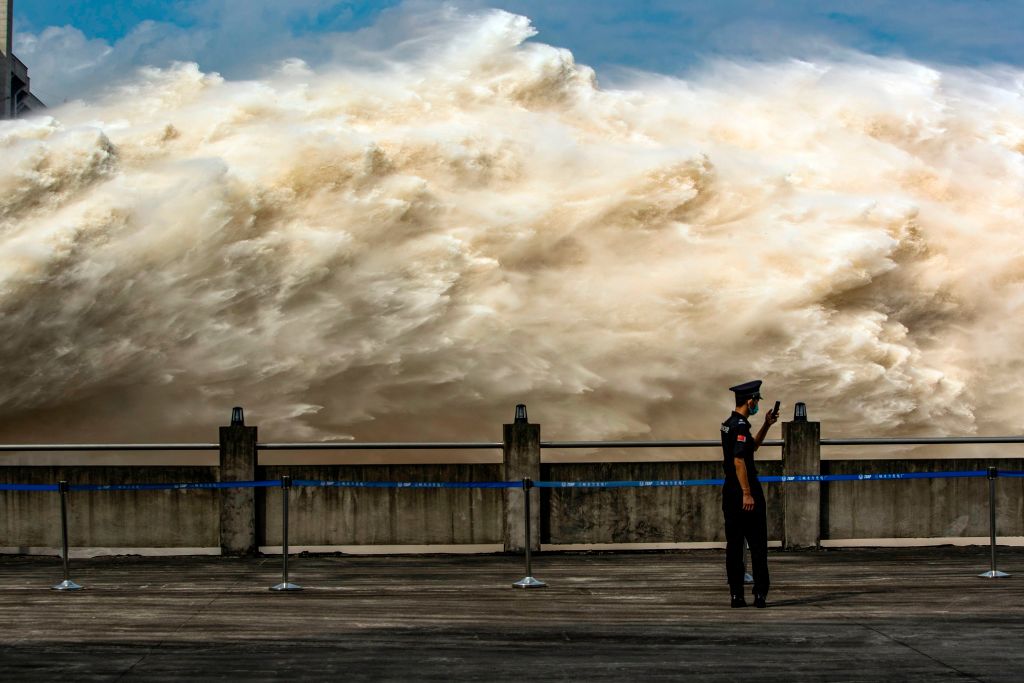 TOPSHOT - This photo taken on July 19, 2020 shows a security guard looking at his smartphone while water is released from the Three Gorges Dam, a gigantic hydropower project on the Yangtze river, to relieve flood pressure in Yichang, central China's Hubei province. - Rising waters across central and eastern China have left over 140 people dead or missing, and floods have affected almost 24 million since the start of July, according to the ministry of emergency management. (Photo by STR / AFP) / China OUT (Photo by STR/AFP via Getty Images)
STR/AFP via Getty Images

The waters of China’s mighty Yangtze River have inched upward in recent weeks, cresting banks, flooding adjacent land, and displacing millions of people from their homes.

Parts of China’s Three Gorges Dam, the world’s largest hydroelectric power station built in 2003 to tame the Yangtze, were deformed by the surge. The dam’s operator said it was on “wartime footing” as Three Gorges neared its maximum intake capacity.

Highways and riverside pavilions in the city of Wuhan disappeared beneath the surging waters of the river, which divides the city in two.

In some rural villages just south of Wuhan, local governments dispatched teams of rescuers on boats to pick up residents from their submerged homes.

Fed by torrential rains, the flooding threatened to unleash humanitarian and economic catastrophe on the 480 million residents and sprawling metropolises—Shanghai, Wuhan, Chongqing—that sit in the Yangtze’s 700,000-square mile basin, an area that accounts for one-third of China’s annual economic output.

The flooding, which started to recede in late July, inflicted the worst natural disaster in a decade on a country still recovering from the pandemic. At least 158 people have died or gone missing and 4 million have evacuated their homes. But so far, it has not dealt a knockout blow to the economy. In fact, Li Yao, a fellow at the East Asia Institute at the National University of Singapore, estimates in preliminary research that the 2020 flood will shave 0.17% from China’s 2020 GDP, far less damage than in previous crises.

“It should not be hard for China to digest the overall economic loss caused by the flood,” Li said.

The flood’s minor dent to China’s economy is no accident. In recent years, Beijing has nurtured new wetlands and built new dams to counter such threats. The trajectory of the floodwaters mirrors government priorities, with newly constructed infrastructure protecting cities and industrial centers at the expense of farmland and rural villages.

Spring and summer rains in China pose annual flooding risk, costing the country an average of $10 billion per year in direct damages. The research firm China Water Risk estimates that China incurs more losses per year due to floods than any other country.

Climate change has upped China’s flooding risks in recent years, says Jennifer Turner, director of the Wilson Center’s China Environment Forum. She says heavy rains in China have increased by about 4% in each of the past five decades amid a changing climate.

A fisherman rows his boat past the roof of a submerged house in a flooded area of Longkou village in China’s central Jiangxi province on July 16, 2020.
HECTOR RETAMAL—AFP/Getty Images

China’s most devastating flood occurred in 1998, when an overflowing Yangtze River killed more than 4,000 people and left 14 million more homeless. In 2016, Yangtze floods killed nearly 700 people and cost the country over $30 billion in damages.

By comparison, this year’s floods are expected to hurt the economy to a far lesser degree, though Li warns “it may still be early to estimate its final economic impacts.”

To be sure, this year’s floods disrupted global supply chains to some extent, shuttering production lines and causing delays in various industries. The region is an important agricultural and construction hub of China, and it hosts factories for car manufacturers, medical suppliers, and steel producers.

On July 16, Reuters reported that the floods delayed shipments of personal protective equipment, or PPE, to the U.S., which desperately needs the supplies to protect against the coronavirus.

In late July, representatives from several shipping companies told Supply Chain Dive that some inland shipping terminals along the Yangtze River had been closed, and shippers on the coast were also operating at diminished capacity.

As of now, however, the floods’ harm to the region’s supply chain appears limited.

Li says there’s some slack in the supply chains of goods like laundry detergent, shampoo, and medical face masks. Factories along the Yangtze manufacture such products, but any interruptions they experienced can be made up by factories in other regions, she said.

Renaud Anjoran, a supply-chain expert at China Manufacturing Consultants in Shenzhen, works with foreign companies that have factories on the Yangtze River. He says that car parts factories would be vulnerable to severe flooding problems, but as of now he hasn’t heard of any major disruptions.

“Either manufacturers got lucky,” Anjoran told Fortune, “or the flooding was directed in nonindustrialized areas.”

Luck had little to do with it.

“China’s flood fighting strategy is to discharge flood [waters] to farmland,” as a means to secure cities and industrial areas, says Li.

The Wangjiaba sluice gates were opened to divert the floodwater of Huaihe River into the Mengwa area in the Anhui province of China, pictured here, on July 21, 2020.
Zhang Yazi—China News/Getty Images

China has over 98,000 dams in total, more than any other country on earth. In response to 1998 flooding, the central government created seven river basin committees to provide funding for infrastructure projects and plan flood control measures along major waterways. The initiative doubled-down on China’s reliance on its vast network of dams along the Yangtze and its tributaries, the most direct method Beijing uses to control floods and insulate cities.

The strategy was on display on July 19, when authorities in central China’s Anhui province opened sluice gates of the Wangjiaba dam, a move that protected cities and more populous areas downstream but flooded acres of farmland and forced the immediate evacuation of thousands of rural residents.

In the town of Youdunjie, which lies on a small river just south of the Yangtze in China’s eastern Jiangxi province, floodwaters reached the second story of homes in mid-July after authorities in a nearby province discharged their floodwaters, according to Sixthtone. Residents of Youdunjie were relatively defenseless to the onslaught, as local authorities lacked the infrastructure or resources to divert floods from the village.

On July 22, Reuters reported that a 55-year-old dam collapsed in the southern province of Guangxi, leaving downstream communities vulnerable to flooding.

Li estimates that the 2020 crisis has flooded over 20,000 square miles of Chinese farmland and says there are early signs the 2020 floods have destroyed some crop harvests. The 2016 floods covered nearly the same amount of farmland, while 1998 floods submerged over 80,000 square miles of agricultural land, according to Li.

Darin Friedrichs, a commodity analyst at StoneX Group in Shanghai, says that vegetable and pork prices climbed in China in mid- and late-July as a result of the floods. Seafood is likely to be the worst hit—given the disruption to lakes and rivers—as well as rice, the most common crop in the region. The timing of the flood saved some crops like canola and wheat, which were “harvested before the flooding got bad,” Friedrichs said. Overall, the market doesn’t seem “too worried yet” about flood-induced shortages, he said.

The farmers who tend to those crops, however, are a source of concern.

Hundreds of thousands of them have been displaced by the floods and face enormous obstacles in recovering from the crisis, says Turner.

“There are no focused flood mitigation standards and nature-based solutions in rural areas [of China],” Turner said. In response to previous floods, Turner said, the central government launched the “sponge city” program in 2015, which mandates that urban centers create wetlands, rain gardens, and other porous landscapes to soak up excess rain. Such policies have not yet been implemented in rural areas, leaving smaller cities, villages, and farmland at the mercy of a rising Yangtze.

The current crisis is the result of an “unfortunate perfect storm” of climate change and human action, Turner said.

The rise in heavy rains due to climate change is testing China’s dam strategy, which seems to assume that “sheer force of hard labor and will” can hold back the surge of water, said Judith Shapiro, an environmental politics professor at American University and author of China Goes Green: Coercive Environmentalism for a Troubled Planet.

There’s worry that the small dams that collapsed this season foreshadow what would be the Big One, a failure of Three Gorges.

The dam, a source of national pride, has so far weathered this year’s crisis, but the cracks it showed mean Beijing may need to reconsider its strategy.

“Not even the Three Gorges Dam has been built strongly enough that we can be certain it will withstand the flooding China has seen in recent weeks,” said Shapiro. “If the dam were to break it would be a disaster of cataclysmic proportions,” she said, one that China’s economy could not escape.