Meet Candace Valenzuela, who could become the first Afro-Latina in Congress 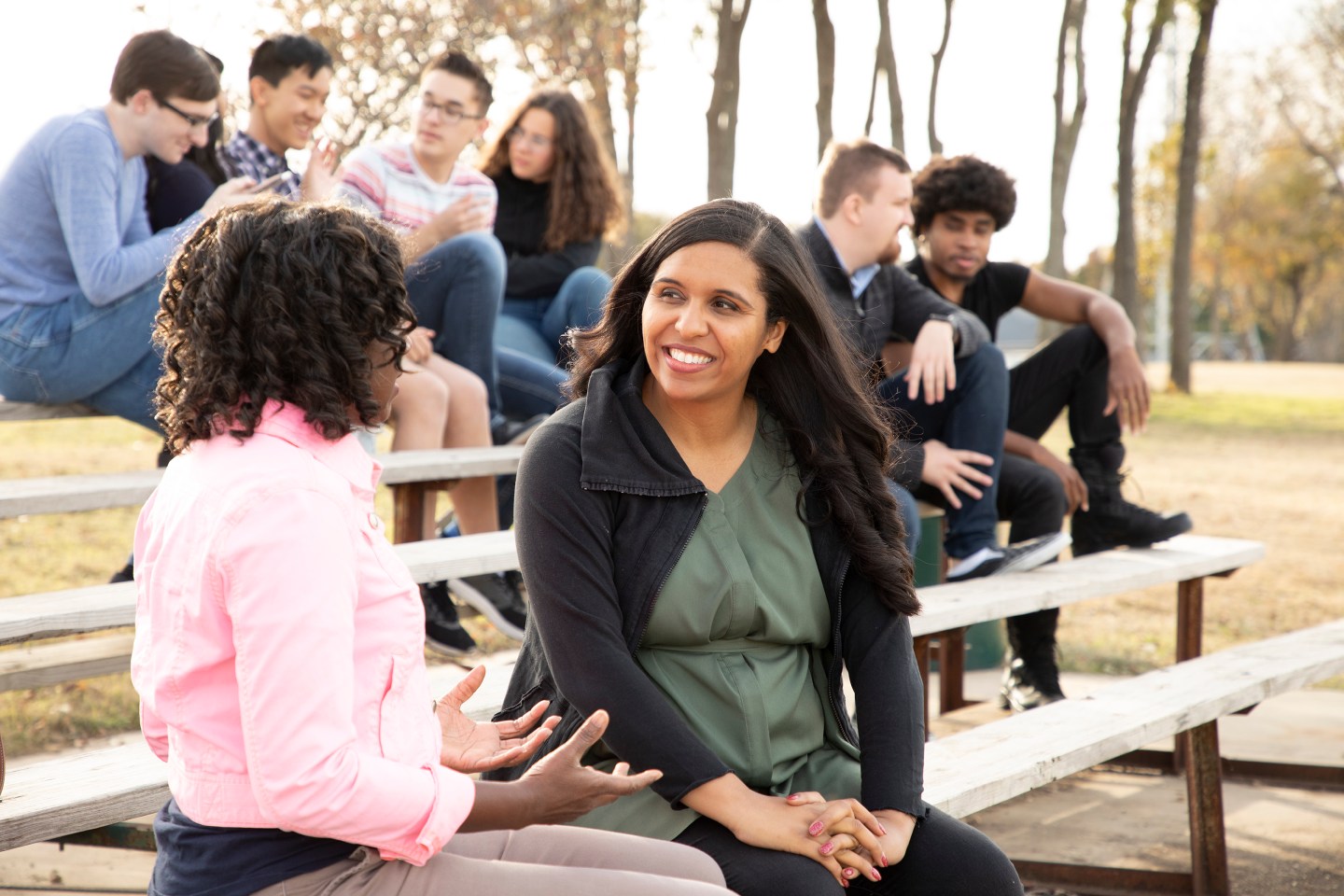 Last month, Candace Valenzuela won her Democratic primary runoff for Texas’s 24th district. And the potential impact of that victory goes beyond her Dallas-Forth Worth area constituents: If she wins the general election in November, Valenzuela will become the first Afro-Latina in Congress.

It’s a milestone that could be achieved twice over this year. Ritchie Torres, the Democratic candidate from New York’s 15th district, who’s all but certain to head to Congress in the fall, would be the first Afro-Latino to serve in the institution upon his swearing in.

Torres brought attention the significance of his likely election with an op-ed that exposed some outdated rules within Congress. Torres wrote that, based on current restrictions, he would not be allowed to join both the Congressional Black Caucus and the Congressional Hispanic Caucus.

“We’re all bound to each other. Our fortunes, our futures come together,” Valenzuela says of the connection between Black and Latino communities. The candidate and former school board member, who has also used her campaign to discuss her personal history with homelessness and domestic abuse, spoke to Fortune about her race for office and the perspective she would bring to Congress. This interview has been edited and condensed.

Fortune: You would be the first Afro-Latina in Congress. What does that mean to you?

Candace Valenzuela: It’s 2020. I’m so amazed and honored to have a shot at being a first here, but it’s also far too late in our timeline as a country. It’s a responsibility that I take very seriously.

What perspective is missing in Congress right now without an Afro-Latina voice?

There’s something about being Black and Latino that is very unique in our power structures in the American experience. One of the biggest problems we’ve had in this country is talking about Black and Latino lives, Black and Latino wellbeing as being at odds with each other. Many of us who live as this intersection have no real way to communicate that we’re all bound to each other. Our fortunes, our futures come together. That’s one of the unique perspectives I’m bringing with me.

When we’re talking about that separation—police brutality has been considered separate for a while. I grew up with an African-American father and a Mexican-American mother. [People think] that police brutality is an issue that only affects African-Americans when it definitely affects Latino communities. Or talking about immigration—we have been very focused on talking about Latinos and immigration. But we have Asians involved in this problem, Africans who are involved in this problem, people from the Caribbean who are involved in this problem too. There are not a lot of people speaking for them. Their voices are often drowned out because we have a very binary view of that narrative. Until we start communicating with each other, those folks are going to continue to fall through the cracks.

Ritchie Torres, the Democratic candidate in New York’s 15th Congressional district, has spoken out about how as a member of Congress, he would not be able to join both the Congressional Black Caucus and Congressional Hispanic Caucus. What does that restriction say to you?

There’s this old perspective that the wellbeing, the futures of African-Americans and Latinos are siloed and distinct and not bound up with each other. Asking someone to choose one identity or another when they’ve been firmly planted in both their entire lives, when they’ve experienced what it means to be in this country and be Black and Latino, is not great.

Your campaign references your experience with homelessness. Do you know if you would be the first legislator in Congress to have experienced homelessness? What would that mean to you?

I don’t know if I would be. I’ve had time to grapple with a lot during COVID, including talking about homelessness. That is one of the most underrepresented voices in power right now. Folks who have never experienced it or never gotten close to it don’t understand that when that happens, it’s typically not due to some moral failing. It’s due to a terrible accident. When we ended up homeless, we were leaving domestic violence. That happens to a lot of families.

You also reference in your ad your family’s history with domestic abuse. Why did you want people to know about that experience?

People need to have a way to understand homelessness. This is just a part of who I am. This is what has informed my policies, this is what has informed why I care about my kids, my teachers, my family. There’s always this disconnected narrative about people who end up in bad positions—that they lack the ability to pull themselves up by their bootstraps. For my mother, she had served her country in the U.S. Army, had made a great effort to take care of her kids, and we still ended up without a home for a while. It’s critical for me to be able to communicate [that domestic violence contributed to] how that happened.

Domestic violence has been an important topic during coronavirus lockdowns, with the risk of domestic abuse increasing while families are stuck at home. What do you think Congress needs to do to solve that problem?

This has been one of those things that keeps me up at night. Kids not able to have the relief of the school day in otherwise toxic situations—I think about them every single day of this pandemic. It hurts.

We’re going to be fighting hard to have access to mental health care, to health care, to equitable wages, to the American dream. These instances of domestic violence and abuse have a tendency to go up when we deal with greater amounts of inequity or financial strain on working families. That is one way we can better address this issue.

The other one is having options for mental health services, health services, making sure we have equitable wages so when people do need to leave, they’re not bound to a partner because they may not be able to put food on the table. This was something that happened with my family, and it was bad enough that we ended up out on the street. That should not be the only option. Making sure systems are in place to ensure equity for families is going to be one of our best weapons against this violence at home.

Much of your campaign is focused on your record as an educator and school board member. What do you think should happen with schools this year?

School was a home for me. I can’t imagine just how difficult it is for a lot of very poor families right now who are trying to make ends meet without school being in place. It’s horrifying that we are in a position that families are struggling to feed themselves and don’t have a source of stability and learning for their kids. As a mom right now—I’ve been looking forward to enrolling my 5-year-old in kindergarten. What that’s going to look like now is very different than what I pictured when he was born.

From the lens of somebody who served on the school board, the first priority has always been protecting and educating our children. I don’t think it’s possible to protect them in any real way given how little protection we’ve been offered from our state and federal government in Texas. Teachers are asked to solve problems that policymakers in D.C. refuse to address.

After the retirement of your district’s incumbent GOP congressman, you’ll be taking on Republican Beth Van Duyne in November, one of the GOP women who have helped make 2020 a record year for women running for Congressional office. Will anything be different for you about competing against another woman on the other side of the aisle?

Not really. The focus of my candidacy, my run for Congress has been fighting for the working families of Texas’s 24th district. It might change for the GOP and their approach to me. They’re running more women as they understand that more women would like to see themselves in the halls of Congress because we’ve been underrepresented for centuries. But on my end I’m working to represent families and this district.

You’ve also run as a mother. Why did you want to highlight motherhood in your campaign?

We have an incredible underrepresentation of mothers in public office. It shows when we’re talking about policies, and how much it costs to pay for childcare. Women are asked to be caretakers, to keep food on the table, to do so many things for their families and society—but they’re not asked for their voice in the halls of power. It’s crazy to me. As I have been able to do this process, to run for Congress, I wanted to emphasize to other women that I’m there to speak for them and I understand a lot of the things they’re dealing with. I understand how hard it can be to ask for your seat at the table while trying to balance a baby.

When I started this process, I had a 4-month-old and a 3-year-old. Now I have an 18-month-old and a 5-year-old. I’m infinitely aware of how impossible this would be if I didn’t have access to childcare. If I didn’t have my mother-in-law helping right now or the kind of husband I have who’s been able to draft his work hours around my work hours, this whole thing would fall apart. It’s troubling to think about the fact that that’s how easy it is for mothers to not have that voice. It’s a part of who I am, it’s a part of why I fight, and it’s a part of who I’m seeking to represent.