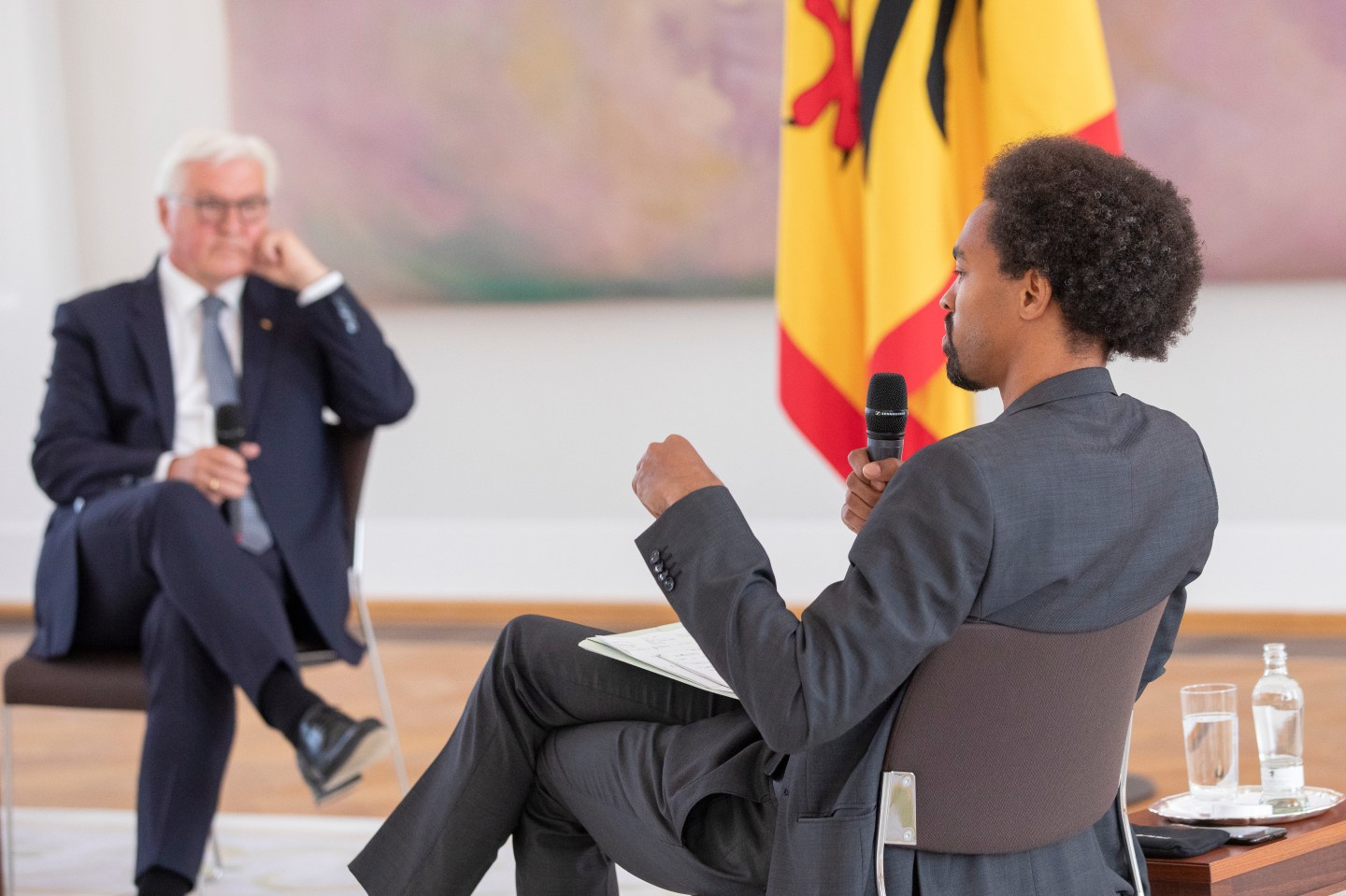 German President Frank-Walter Steinmeier (L) speaks with Daniel Gyamerah division manager of Think-Tanks "Citizens For Europe" in Berlin while hosting a discussion on racism in Germany at Schloss Bellevue palace on June 16, 2020 in Berlin, Germany. German cities have seen their own share of protests against racism and police violence since the death of George Floyd in the USA. Maja Hitij-Getty Images
Maja Hitij—Getty Images

Earlier this month, the killing of George Floyd in the U.S. sparked massive anti-racism protests around Germany. But those tens of thousands of people did not just take to the streets out of solidarity; many were protesting structural racism in Germany itself.

Some of this structural racism manifests itself in police behavior, as is the case in the U.S. But it is also readily apparent when looking at corporate Germany.

There are 179 people on the management or executive boards of Germany’s 29 Fortune Global 500 companies. Just two of them are not white—both hailing from South Asia—and none is black. In fact, Germany has only had one prominent black executive in recent times: Siemens’s chief human resources officer, Janina Kugel. And she left the company last year to become a consultant.

“When we see diverse leadership, people who are nonwhite in huge companies, they are normally in visible positions and most of the time in diversity and inclusion positions,” says Daniel Gyamerah, who leads the antidiscrimination team at the Berlin-based think tank Citizens for Europe. “The technical term is ‘token’…[but] in Germany we’re not even there. The pressure to at least have a signal that you are a racially diverse company is not even that high in Germany.”

And why is that pressure lacking? It’s partly because of a lack of data.

Germany, unsurprisingly given the darker chapters of its history—Nazi eugenics; Namibian genocide—is extremely squeamish about the topic of race. People even steer clear of the German word for race (Rasse) because of its connotations as a biological rather than social construct; the word also refers to animal breeds.

Accordingly, the German authorities also do not collect racial demographic data, so nobody is quite sure how many people of color there are in the country, whose total population is around 83 million.

The only useful data for counting minorities comes from Germany’s “microcensus” tabulation of people’s migration background. From this, we can deduce that a couple of years ago there were nearly 4.5 million people in Germany of first- or second-generation Middle-Eastern or Asian background, and 936,000 people who were either first- or second-generation immigrants from Africa.

“This does not include the third, fourth or fifth generation, or black people from the U.S. or France who live in Germany, so it’s a conservative estimation,” says Gyamerah.

So while it is easy to contrast the fact that African-Americans make up 13.4% of the U.S. population with the fact that there are just five black CEOs in the Fortune 500 and conclude that black people are heavily underrepresented in the top ranks of corporate America, the problem is not so easily identified in Germany, Europe’s largest economy.

“It’s standard in the U.S. to have data about racial justice. We don’t have that at all in Germany,” says Gyamerah. “We don’t even have the discourse…We have more than a million people of African descent, but there is no quantitative research about these communities.

“One reason of course is German history,” says Gyamerah. “But the much more important one is the lack of a structural understanding of racism. If you lack that understanding then you don’t come to the conclusion that you need the data.”

Moghimi points to the usefulness of such data in the British context. “The discussion is on another level [in the U.K.] because we have data on BAME [black, Asian, and minority ethnic] employees there, and you can combine those data with other diversity dimensions, for example, gender,” she says. “It becomes really obvious that women of color definitely find it harder to get the same salary or leadership positions as their white counterparts. It’s visible because there’s data.”

Citizens for Europe and several other organizations—with the support of Germany’s Federal Antidiscrimination Agency—are about to try to at least partially close Germany’s data gap with an online survey called Afrozensus. It’s not a headcount, Gyamerah says, but rather an attempt to “provide a differentiated picture about the experiences of black people in Germany.”

“It will give those people who are interested in improving their business—and legislators—a better understanding of what the actual challenges on the ground are,” he says, explaining that companies wanting to become more diverse will have “facts on the table” to help them better understand black people who apply for a position.

According to Bernhard Franke, the head of the Federal Antidiscrimination Agency, 23% of those with a statistical “migration background” say they have experienced discrimination of some sort in the past two years.

“Complaints about racial discrimination have doubled in the past five years, and most of them concern experiences in the workplace or while seeking jobs. Still, we believe that our numbers reveal just a fraction of the discrimination that likely occurs,” Franke says.

He puts the increase down to both “a harsher political and social climate where unabashed racism has become more visible”—the far-right Alternative for Germany (AfD) Party is currently the official opposition in Germany’s Parliament—and a greater awareness of racism, making people more likely to make an official complaint.

But some potentially discriminatory practices are deeply entrenched.

“Many HR departments still require [résumés] to come with a photo and full personal information, which is why our agency has long argued for anonymizing recruitment procedures,” Franke says. “Diversity in the workplace must be more than window dressing. Many companies have been doing great work on this, but there is still a long way to go.”

“It puts the onus completely on the individuals affected who have to take their cases to court and have relatively little time to do so,” Franke complains. “There is no collective action clause, and our agency has only very limited investigative powers. If we are serious about the fight against racism we also have to take a critical look at the legal toolbox.”

Germany has no race-based quota systems, but it has for the past four years had a 30% quota for women on large companies’ supervisory boards. As a result, just over 35% of those supervisory board positions at the country’s biggest 100 companies are now filled by women.

But look at management and executive boards, where there is no legal quota, and the picture is quite different. Across the 29 German Fortune Global 500 companies, women hold just 13.4% of those seats.

“In Germany there is a strong discourse about implementing quotas in large companies for gender equality, and there’s still no good representation of women at all levels,” says Gyamerah. “Of course, if people are held back by structural racism, we also need the same legislation for racial equality. But we know even the legislation for gender equality is not enough right now.”

Corporate Germany may not have made sufficient strides toward equality, in the absence of being forced to, but it hasn’t entirely ignored the issue either.

For the past 14 years, an organization called the Diversity Charter—of which Chancellor Angela Merkel is a patron—has provided a forum for companies and other organizations to discuss such issues and share ideas on the way forward. Around 3,500 organizations have signed up.

“I think a lot of progress has been made. There are a lot of best practices,” says spokesman Stephan Dirschl. “We have had a lot of input on how to improve diversity today.” But even he readily acknowledges that the charter’s signatories “have just started with diversity management,” and “far too little is happening, especially in the management levels of large corporations.”

“We need to convince more organizations to put the right people on the boards,” Dirschl says. “We need more role models.”

According to Gyamerah, a possible solution—apart from new legislation—could lie in the creation of leadership pipelines for people of color.

“We need high-level leadership training that focuses on black people and people of color in Germany, not internationally,” Gyamerah says. “We know the leadership so far don’t have enough people at the table who reflect these experiences. We need pipelines to help them access these tables.”

More coverage on the intersection of race and business from Fortune: