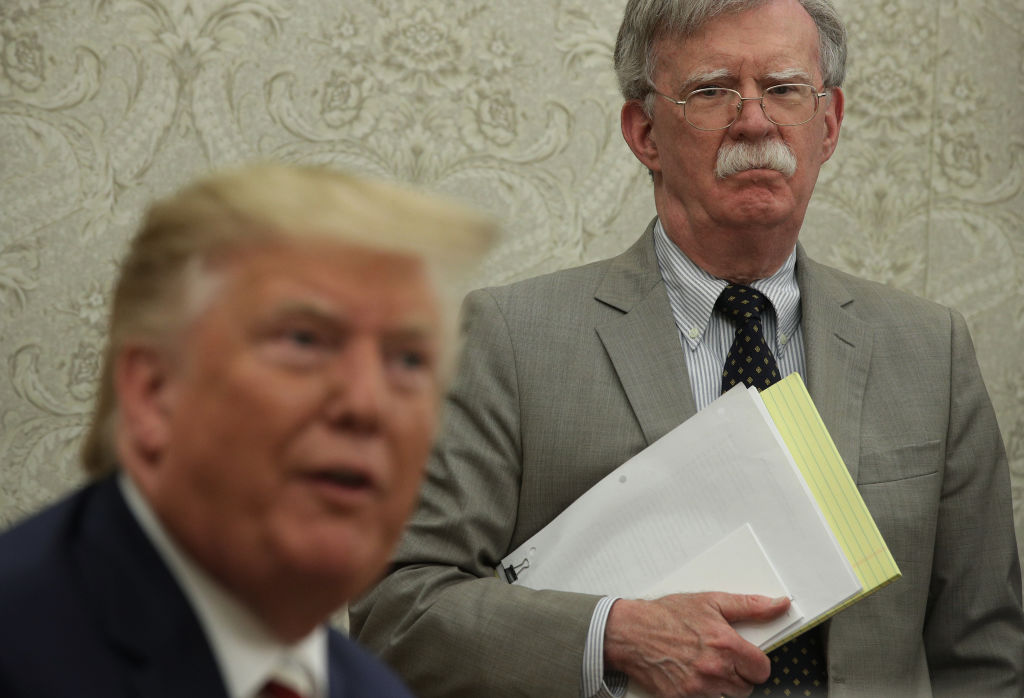 That sentence, or some variation of it, leads a torrent of news stories over the past 24 hours detailing revelations in Bolton’s forthcoming book, The Room Where It Happened: A White House Memoir. The U.S. Justice Department asked a federal judge on Wednesday to halt publication of the book, which has already been printed and distributed to booksellers, on the grounds that it would damage national security. Bolton published a lengthy excerpt in Wednesday’s Wall Street Journal.

The excerpt depicts Trump as an erratic, ill-informed, and unscrupulous leader eager to subordinate U.S. national security objectives to boost his own bid for re-election. It’s an unflattering portrait that contradicts Trump’s claim to be the first U.S. president to “get tough” with China since Richard Nixon restored relations between the two countries in 1972.

Bolton recounts a dinner meeting between Trump and Xi during last year’s G20 summit in Osaka, Japan, in which Trump “stunningly, turned the conversation to the coming U.S. presidential election, alluding to China’s capability and pleading with Xi to ensure he’d win.” He recalls that Trump “stressed the importance of farmers and increased Chinese purchases of soybeans and wheat in the electoral outcome.”

Trump’s conversations with Xi, Bolton remarks, “reflected not only the incoherence in his trade policy but also the confluence in Trump’s mind of his own political interests and U.S. national interests.”

Bolton characterizes Trump’s 2018 reversal of penalties imposed by the Commerce Department on Chinese telecommunications giant ZTE and his 2019 offer to drop criminal prosecution against Huawei as misguided efforts to ingratiate himself with Xi—all in the hope of closing a trade deal that would help lock up the farm vote. He alleges Trump’s zeal for a deal blinded him to the significance of pro-democracy protests in Hong Kong, and Beijing’s detention of Uighurs, a predominantly Muslim minority in the northwest Xinjiang province.

He also suggests Trump, enthralled by the tales of “Wall Street financiers who had gotten rich off mainland investments,” would have few qualms about selling out Taiwan.

Trump loyalists dismiss Bolton’s account as an attempt to settle old political scores. In a Fox News interview on Wednesday night, Trump lashed out at him as a “washed-up guy” who “broke the law.” Democrats, meanwhile, are castigating Bolton for refusing to be a witness in Trump’s impeachment trial earlier this year.

It’s unclear how—or whether—”Bolton’s bombshells” will affect the “phase one” trade agreement Trump signed with China in January. Chinese purchases from the U.S. have been slowed by the coronavirus pandemic. Late last month, Trump expressed frustration over the slow pace.

In a full day of testimony before the House and Senate on Wednesday, White House trade representative Robert Lighthizer said he expects China to honor its promise to buy an additional $200 billion in American goods and services over the next two years.

Lighthizer may be right. But it also may be that Bolton has made it harder for Trump to claim political credit for the deal. Poll after poll shows that distrust of China is one of the few issues on which voters from both parties agree. Trump campaign strategists believe his efforts to blame China for the pandemic have been resonating with voters. Until yesterday, at least, many were pushing the idea that Trump is more likely than Democratic challenger Joe Biden to hold China accountable as one of the campaign’s strongest messages.

On Wednesday, Biden seized on Bolton’s allegations as evidence that Trump “was willing to trade away our most cherished democratic values for the empty promise of a flimsy trade deal.” The same day, the Lincoln Project, a group of anti-Trump Republicans, released an ad skewering Trump for getting “rolled” in his dealings with China. “They know Donald Trump is: weak, corrupt, ridiculed,” the voiceover intones. “China beats him every time.”

Police in China have created a vast DNA collection program by retrieving blood samples from millions of Chinese males since late 2017, according to a new report from the Australian Strategic Policy Institute. Chinese authorities aim to collect samples for up to 10% of China’s male population and have even gone into schools to collect mandatory blood samples from students. Activists argue that the effort violates personal privacy and are concerned that it gives the government more power to frame and prosecute political dissidents. The report claims that Thermo Fisher, an American life sciences company, has aided Chinese authorities in the DNA collection scheme. New York Times

An oil bust in Myanmar

The precipitous drop in global oil production amid the pandemic is being felt around the world, even in rural Myanmar. This week, the independent Burmese magazine Frontier examined how a global drop in oil demand has devastated the rural state of Magway. Before the pandemic, the region had been producing roughly 8,000 barrels a day in its oil rich fields, which employed an estimated 500,000 people. Since February, however, the vast majority of those workers have lost their jobs (only 20,000 to 30,000 remain employed), leaving hundreds of thousands of locals with few opportunities for work. Frontier

This week, The Wire China detailed the story of Nio, China's largest electric vehicle company and Tesla's strongest competitor in the Chinese market. The company was founded in 2014 on the idea to make sleek, high-end EVs for the Chinese market. The company rode high expectations to over $7 billion in private investments and a $12 billion valuation after its 2018 debut on the New York stock exchange. But by late 2019, the company was running out of cash. In February, the Chinese government invested $1 billion to keep it afloat, showcasing how Beijing is willing to 'grab the wheel' in achieving its goal to become a global leader in electric vehicles. The Wire China

The 2019 Hong Kong protests ignited over a proposed extradition bill that could send Hong Kongers to be tried in the mainland. On Monday, a senior Chinese official said Beijing’s new national security law will have the power to do just that. The news fuels growing concerns that Beijing’s power over Hong Kong may be more expansive than Beijing’s authorities have led on. This week, Bloomberg outlined how an arm of the Chinese government, the United Front Work Department, has worked behind the scenes to line up political and business support for Beijing’s new law. Victor Shih, a Chinese politics expert, also argued this week that Hong Kong’s banking system is in far more jeopardy than investors currently realize. The Guardian

From Himalayan battle to trade tensions

Sino-Indian relations are at their rockiest point in decades after a border clash this week resulted in dozens of casualties. India’s government reported that at least 20 soldiers died in hand-to-hand combat with Chinese soldiers in the Galwan Valley, a disputed border region in the Himalayan mountains between China and India. China’s army confirmed that it also suffered losses without specifying how many. The two sides have reportedly agreed to deescalate tensions, yet an Indian diplomat believes that India should reexamine its "economic dependence" on China amid the conflict. The Wall Street Journal

China’s capital, Beijing, has recorded nearly 150 confirmed COVID-19 cases in the last week. It marks the country’s largest outbreak in months, and authorities in Beijing are taking aggressive measures to stamp out the spread of the virus. Beijing has locked down several neighborhoods, cancelled roughly 70% of the flights coming in and out of the city, closed schools, and is testing 90,000 Beijing residents per day. Beijing says the outbreak originated at Xinfadi, a wholesale food market in the southern portion of the city. And after closing the market, authorities found traces of the virus on a salmon cutting board, which fueled speculation that the virus may have been carried to China on salmon imported from Europe. Epidemiologists say this is “unlikely,” yet the news has sparked a country-wide boycott on imported salmon. Or, as one analyst put it, China is now dealing with the rise of “xenopescophobia, the fear of foreign fish.” Fortune

JD.com—China’s second largest e-commerce company raised $3.9 billion in its debut on the Hong Kong stock exchange on Thursday. JD.com, already listed on Nasdaq, is part of a string of Chinese companies seeking secondary listings in Hong Kong as pressure ramps up on Chinese companies in the U.S. Fortune

Nomura—On Wednesday, the Japanese bank, along with cryptocurrency partners Ledger and CoinShares, launched Komainu, a ‘custody solution’ or security system that will be used to protect digital assets for financial institutions. Deal Street Asia

Grab—The southeast Asian ride-hailing company announced on Tuesday that it was laying off 5% of the company’s employees due to losses incurred by the pandemic. Grab says that the pandemic has provided a boost to its food and grocery delivery divisions, but it is not enough to make up for the loss of ride-hailing passengers amid social distancing guidelines in Southeast Asia. Jakarta Post

Japan’s export economy is in trouble, and it’s the U.S.'s fault. Yesterday, the Japanese government released data showing that exports were down 28.3% from January through May in comparison to the same period last year. Japan’s biggest trade partner is the U.S. and auto exports make up nearly a third of Japan’s total exports to the U.S. This year, vehicle and auto parts exports to the U.S. are down 70% compared to 2019. But it is not all doom and gloom for Japan. The government’s monthly economic report, which will be released Friday, will be more upbeat than initially expected, as the government projects that a reopening economy will provide a boost to consumer demand. Reuters