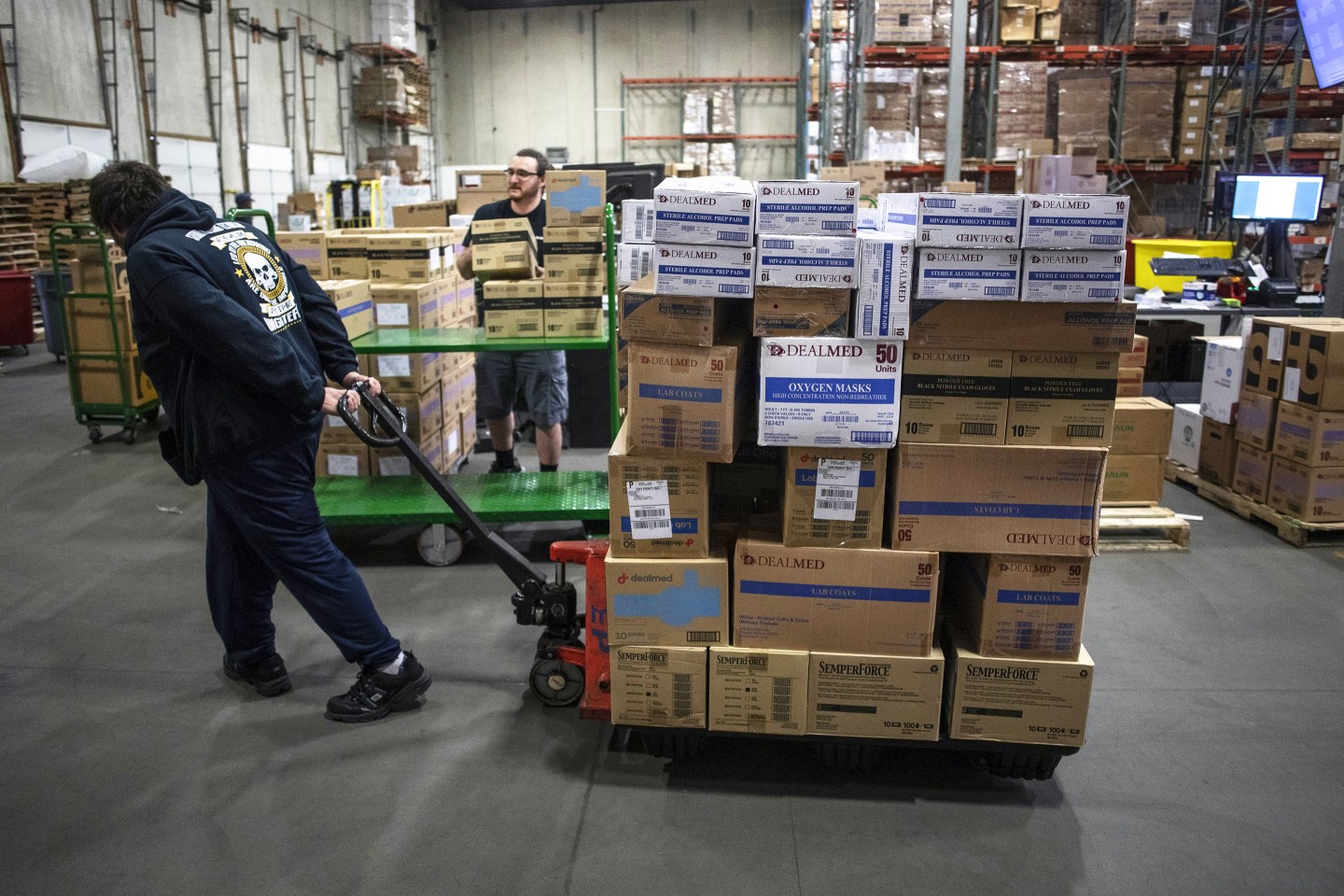 A worker pulls a cart of medical products at a Dealmed-Park Surgical supply facility in Lakewood, New Jersey, U.S., on Wednesday, March 11, 2020. Founder Michael Einhorn's medical supply company may run out of the masks used to protect against coronavirus in two weeks unless the Chinese manufacturer of his branded equipment resumes production this week. Photographer: Victor J. Blue/Bloomberg via Getty Images
Victor J. Blue—Bloomberg/Getty Images

Einhorn is president of Dealmed, one of the two largest suppliers of medical equipment for the New York, New Jersey, Connecticut tri-state area, the epicenter of the coronavirus outbreak that’s home over 200,000 cases, around half of the nation’s total. Einhorn furnishes hospital and clinics with medical masks, the product that’s evolved from the ultimate in super-cheap disposable protective gear to a famously sought-after, must-have safeguard in the campaign to defeat the virus.

Einhorn’s supplies are so precious that he hired armed guards to patrol a warehouse packed with millions of masks in Lakewood, New Jersey.

“All of our masks are coming from China, just as before the outbreak, and China is still by far America’s biggest source of product,” Einhorn tells Fortune. “All of these players that weren’t in the business before, from Apple to foundations and others that are trying to be heroes, to middlemen that just want to price-gouge, are causing a bidding frenzy for masks from China.”

Einhorn’s pickle: He’s buying his masks from the same Chinese factories, so his costs, and hence the prices he’s forced to charge hospitals in New York or New Jersey, are exploding.

“Here are the new versus the old numbers for masks,” he says. “We have three principal suppliers in China. Until early this year, we were paying around 30 to 50 cents per mask. We’d always transport on container ships. The trip took 30 days, but we could transport 300,000 in a container for $15,000 or 5 cents per mask.” So his total cost, delivered to his warehouses, came to roughly 35 to 55 cents per unit. Hospitals in Manhattan would typically pay 70 to 80 cents, cited by Governor Cuomo as the state’s pre-crisis cost.

Today, those long-time suppliers in China, and others he’s reached out to, are charging around $2 a mask, or seven times more than in December. The prices are fluctuating daily, and the Chinese will accept only up-front payments. But the most mind-blowing shift is in shipping. Since many hospital are desperate for daily deliveries to replenish their supplies, Delamed now relies on air freight. “Two weeks ago, we were paying $40,000 to $60,000 for cargoes that were one-fourth what we’d put on container ships,” he says. “Then, the cargo planes were in such short supply that the cost went to $80,000 to $90,000.” Now, his shipping costs have skyrocketed from that pre-crisis 5 cents cents to amounts that range from $1.30 to in one case $4. “That’s how crazy it got,” says Einhorn.

That brings his all-in costs to $3.30 to as high as $6, a five-to-nine fold increase in four months. His hospitals and clinics are paying on average in the $5 range. Dealmed, like other distributors, is benefiting from the explosion in orders. But it’s not price gouging. The gigantic markups and fattest profits are going to the Chinese manufacturers and air cargo outfits that can pretty much charge what they want.

Inside Dealmed’s warehouse in Lakewood, New Jersey. For six weeks from late January to mid-March, all shipments of masks from China to the U.S. ceased.
Courtesy of Dealmed

That Einhorn still gets all his masks from China is telling, because he’s succeeded in moving most of his production and purchases of almost everything else out of China. By late 2018, Dealmed was sourcing almost 40% of its products from China. But when President Trump started slapping tariffs as high as 25% on Chinese imports in 2018, Einhorn reckoned that heavy duties were here to stay. He rapidly shifted sourcing of gloves to Malaysia, and disposable paper products and swabs for strep throat to the U.S. “But alternatives to China for medical masks practically didn’t exist,” he says. “The products coming from places like India and Mexico didn’t have FDA approval, and in many cases, the quality was also too low, and still is today.”

To make matters worse, the output from the U.S. was tiny. Mike Bowen, EVP of Prestige Ameritech, a Texas manufacturer of masks and other protective equipment, notes that fifteen years ago, U.S. companies’ production of masks practically overnight dropped from around 90% of the supplies consumed by our hospitals and other customers to 5%. “Despite our campaign to diversify from China, we had no viable alternatives to China for masks,” Einhorn recounts.

Einhorn viewed danger ahead even before the virus scare emerged. “In August and September, it looked as though we’d be having a bad flu season,” he says. To get ready, he ramped up orders to China. Then, on January 8, the CDC announced that “a pneumonia of unknown cause” was spreading in Wuhan, China. “It was then I knew that something shocking was happening,” recalls Einhorn. “All of our production was coming from factories within an hour drive from Wuhan.” Dealmed wasn’t alone.

Wuhan was and remains the world capital of mask manufacturing. Einhorn feared that the outbreak would shrink supplies not only for Dealmed, but for all importers, including national players Cardinal Health, Medline and Henry Schein, saddling U.S. hospitals and clinics with severe shortages.

As always, production was already bound to decline sharply over the Chinese New Year vacation starting in late January. Einhorn––already well-stocked in anticipation of a bad flu season––took early steps to ensure that his customers maintained adequate supplies. “We didn’t take on new customers,” he says. “We told hospitals we’d continue delivering only the quantities they were already ordering to prevent hoarding.” Hospitals, he observes, were wasting a lot of masks by laying them out in boxes so that doctors and nurses could take, and dispose of, as many as they wanted. Einhorn told his customers to assign the boxes to supervisors who’d preserve stocks by handing them out on request.

“Our customers just yawned,” says Einhorn. “Nobody seemed to take the threat seriously in January.” Then, factories in Wuhan shut down for Chinese New Year, and stayed shuttered by government edict as Coronavirus ravaged the region. “We could see that a nightmare was coming,” says Einhorn. For six weeks from late January to mid-March, all shipments of masks from China to the U.S. ceased.

In early March, the Wuhan factories started making masks again––but not for America. “I don’t know if it was a formal edict,” says Einhorn. “But the tone from suppliers was, ‘We need to supply our domestic customers first.’ We’d schedule orders from all of our three suppliers, and they’d all pull back. Our rivals were getting the same response.” Einhorn sought to replace the lost supplies from China with product from the U.S. or other nations, but was unable to find suitable substitutes that were either FDA approved or of adequate quality.

In the past two weeks, says Einhorn, production from China has surged to around 90% of its pre-crisis level, and the informal ban on U.S. exports has disappeared. “We had enough advanced orders starting with our predictions about the flu in August to keep our customers stocked at the old levels,” he says. Now, Dealmed is gigantically increasing it imports from China. The week of April 6, Dealmed sold 1.5 million N95 masks, the thicker, tighter-fitting product used by doctors and nurses exposed to virus patients, and 3 million surgical or just plain “face masks.” Those are about ten-times the quantities of each that Dealmed supplied prior to the outbreak.

“We don’t have enough to meet all requests, but we’re getting close,” says Einhorn. “In the last two weeks, China has put out a decent amount of product.” He notes that some hospitals have sufficient supplies, they just aren’t saying so. “All hospitals are saying they have shortages,” he says, “and some do. But others now have stockpiles to cover around 45 days.”

The crisis is a call to arms for U.S. manufacturers. 3M, by far the biggest domestic producer, has doubled its production of N95 masks in the U.S. to 35 million a month in this year, and pledges to hit 50 million by June. The surge from America’s factories will help, says Einhorn, but the big challenge is ending the over-dependence on China that’s multiplied prices as much as nine-fold in a matter of weeks.

Einhorn notes another bizarre feature of the Mask Economy. The product that Dealmed sources from 3M, which is top-of-the-line, it sells for far less than the brand that comes from China. And sundry middlemen have gotten ahold of 3M product, and are trying to sell it in the “gray” market for at exorbitant prices. On April 9, Dealmed got an email from a distributor in India offering 20 million 3M masks at $6.85 each, a multiple of what the Dealmed pays 3M for exactly the same products.

Einhorn marvels that factories in Wuhan, where the virus originated, are ripping their U.S. customers desperate for the supplies to fight it. “Can you imagine, a virus hits the exact place where they make almost all of the masks needed to stem the virus?” marvels Einhorn. “That dependence caused the zombie apocalypse.” Einhorn is relishing the day when masks stop arriving on super-pricey flights like VIPs, and disembark again, cheap as before, from container ships traveling from sundry corners of the globe.

—3 strategies small business owners are using to get their SBA stimulus loans faster
—When will your SBA loan be approved? Why the process is moving so slowly
—College educated investors may be more likely to fall for coronavirus scams
—Corporate credit markets do brisk business after Fed help
—Listen to Leadership Next, a Fortune podcast examining the evolving role of CEO
—VIDEO: 401(k) withdrawal penalties waived for anyone hurt by COVID-19