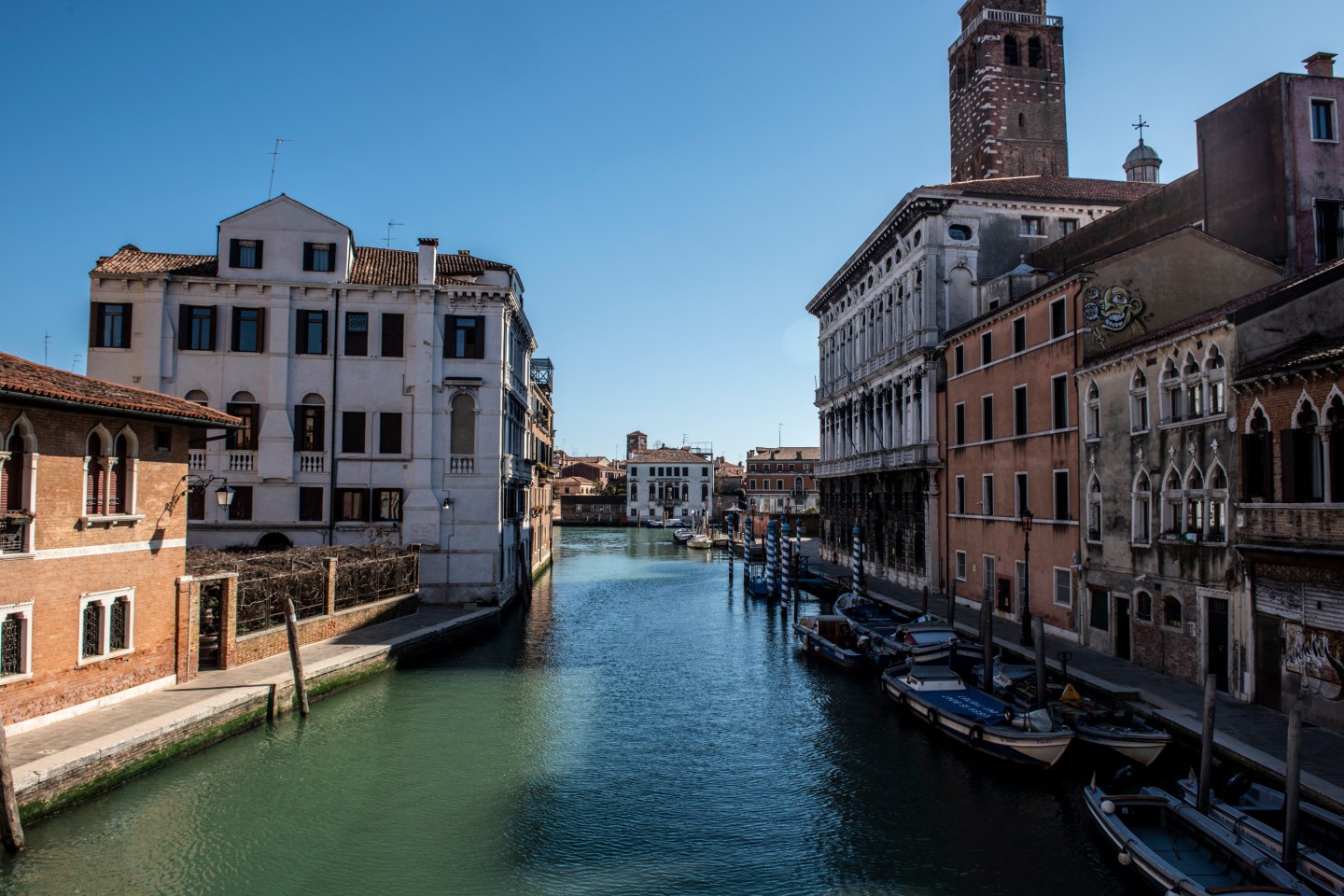 Daily life in Venice, Italy, on March 15, 2020 during the Coronavirus Emergency. Most of the streets around the city are empty and boat traffic is greatly reduced. In the less polluted waters, locals are seeing an abundance of fish. Wire photography:
Giacomo Cosua—NurPhoto via Getty Images

If there’s something positive to be found in Italy’s emergency coronavirus orders to lock down 60 million residents, it might reveal itself in a sunset or while peering down at the waterways.

After just a few weeks of shutting down huge portions of the economy, the country’s environmental health already appears to be making a roaring comeback—at a heavy cost, of course.

Measured in lives, the COVID-19 outbreak has had a devastating impact on the country. As of Wednesday’s report from Italian health officials, the outbreak had killed nearly 3,000 with total cases nearing 36,000. In both measures, only China has recorded more.

A decree from Prime Minister Giuseppe Conte shut down schools, restaurants, bars, tourist sites, offices, cinemas, or any other place where crowds may gather in close proximity. That measure, now being followed in part in other European countries, is ravaging Italy’s economy, which could contract by as much as 15% this year. Social norms have changed, too, as typically social Italians are told to stay far away from one another.

The impact of a big reduction in vehicle traffic and industrial activity across the economically vibrant northern swath of the country is evident in European Space Agency satellite photos comparing January with March.

Also known as the bel paese, or “beautiful country,” Italy has a vexing air-quality problem, particularly in the industrial Po Valley region where the coronavirus outbreak is at its worst. In recent years, Italians have been ordered to leave their polluting, diesel-powered cars at home on various days as smog levels exceeded health standards. Car traffic these days is at a fraction of what it once was as people have been largely confined to their homes.

Meanwhile, a near shutdown of cruise- and cargo-ship traffic around Italy’s canal city of Venice has resulted in fish returning to the Venice lagoon and canals for the first time in decades.

Italian media credits cleaner air and a lack of foot traffic for a bloom in springtime flowers carpeting Rome’s urban parks, with patches of wild flowers growing to a size normally seen in May.

Wild flowers carpet a park adjacent to the Basilica of Saint Paul Outside the Walls in Rome. Original photography: Bernhard Warner

There are similar reports from Hubei province in China, where the coronavirus outbreak began, and from other parts of the world where lockdowns have been in place for more than a few days. One report estimated that China’s greenhouse gas emissions over the past month are as much as a quarter below normal levels.

While analysts may cheer the numbers, the way we arrived at them is not at all good news—even from an environmental perspective.

“In a very short span of time we are seeing positive developments that we would welcome under other circumstances,” Christiana Figueres, the UN’s top climate change official until 2016 and the coauthor of a new book on environmental priorities, told Fortune. “But this is not how we want to reach those goals. On their own, these are short-term improvements at best.”

Something similar happened during the 2008–09 global financial crisis when growth in worldwide greenhouse emissions fell by half. It shot back up again when the economy returned to full output.

According to David Turnbull, strategic communications director for Oil Change International, one way to make sure some of these kinds of short-term environmental benefits get locked in is for policymakers to ensure that any economic stimulus packages tied to the coronavirus pandemic stress sustainable development.

“The coronavirus is the biggest problem facing the world today, but before the outbreak, the biggest problem was climate change. And after the outbreak goes away, it will again be climate change,” Turnbull said. “But the desire to face down both problems can come together. Governments should show they can walk and chew gum at the same time by making sure that the trillions of dollars being injected into economies are done in a way that will keep greenhouse gas emissions lower and promote sustainable growth.”

So far, it seems the opposite may be happening. On Thursday, European Commission officials were reportedly operating under the idea that the coronavirus pandemic is forcing them to “reorder priorities,” meaning that key environmental reforms like biodiversity strategies and anti–food waste measures will likely be put on the back burner.

That would be a missed opportunity, says Figueres.

“Environmental and anti-coronavirus priorities should be one set of priorities,” she said. “There’s no need to pick between them.”

Andrea Minutolo, head of the research division for the Italian environmental lobby group Legambiente, said the national shutdown in Italy is probably a net-positive from a strictly environmental perspective. But it’s not clear-cut.

“Some of what we have seen is seasonal. And while there is less traffic and less industrial activity because of the lockdown, there is also more home energy use as people stay indoors,” Minutolo told Fortune. “The only way we will get everything pointing in the same direction is to set up the right rules and incentives. That is what the world should be doing as we emerge from this crisis.”

—How to prepare your personal finances for a coronavirus recession
—The Fed made a bold move to calm shaky markets. But is it enough?
—Why return CEOs are usually bad news for a company’s stock
—Dormant PayPal Credit accounts are coming back to hurt credit scores
—Listen to Leadership Next, a Fortune podcast examining the evolving role of CEOs
—WATCH: What’s causing the looming recession