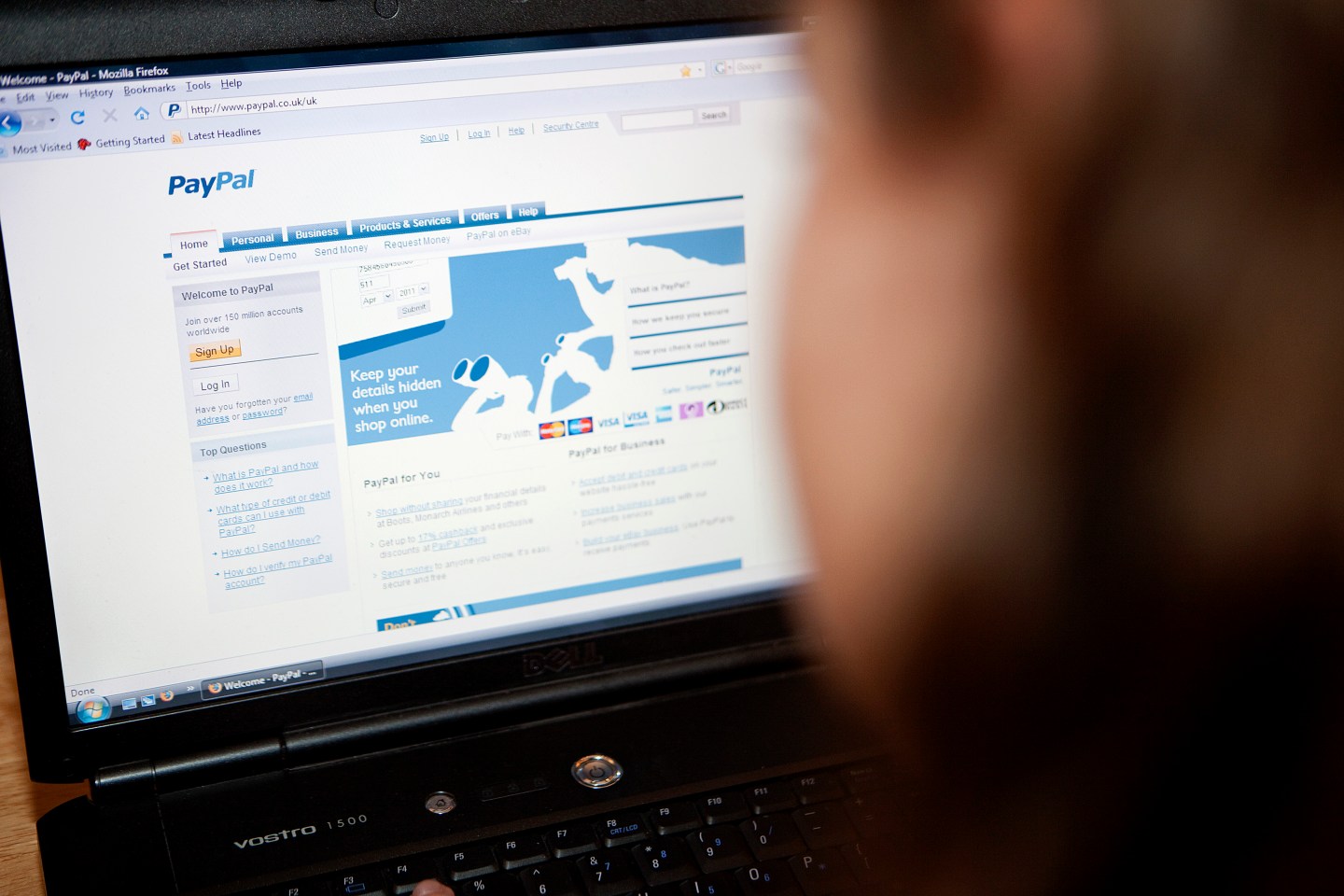 Broadcast engineer Mike Fitzpatrick has been saving up and watching his credit score closely in preparation to build an addition onto his Massachusetts home. Despite his vigilance, he was surprised to find a 20 point decline in his credit score when he checked his account on the Credit Karma app in February.

He found a new addition to his credit report labeled “SYNCB/PPC.” A Google search revealed it stood for Synchrony Bank and PayPal Credit.

This came as a shock. He had been using a PayPal Credit account since 2013, when the service was still named Bill Me Later. He signed up for the service specifically because it didn’t report to any credit bureaus.

It didn’t count toward anything, that is, until this past October, when Synchrony began reporting PayPal Credit to credit bureaus. Fitzpatrick does not recall any communication from PayPal or Synchrony alerting him to this change.

He’s not alone. Dozens of posts on Reddit, the Consumer Financial Protection Bureau’s (CFPB) consumer complaint database, and other sites were filled with similar accounts of PayPal Credit popping up on credit reports and causing scores to change.

Some posters said they didn’t know their PayPal Credit accounts existed at all, causing considerable confusion when they began to be reported. Others were alerted about their accounts, both known and unknown, when they were closed in a typical sweep of inactive credit lines.

“It appears numerous other Paypal [sic] customers are being confronted with this issue of having some account related to Paypal in their name closed despite not recognizing the account or having any knowledge of ever having opened a credit account under Paypal,” one complaint reads. “This has resulted in a lowered credit score for myself and others, and it’s hard to tell the scale that this has happened at.”

Caitlyn Rose, a Los Angeles–based model and entrepreneur, took angrily to Twitter and Instagram, writing “@PayPal just randomly closed an account I never authorized to open and it dinged my credit.”

Rose said the closure knocked her credit score down 39 points. When she called PayPal Credit, she was forwarded to Synchrony; they told her they’d open an investigation for fraud. She said this suspended her entire PayPal account, including noncredit services, for months, which she uses regularly for business transactions. She said she doesn’t remember any communication from Synchrony or PayPal about the PayPal Credit account in her name.

These issues stem from a series of changes PayPal made starting in July 2018, when the company switched credit issuers. Before that, when PayPal partnered with Comenity Bank to issue credit, neither company reported to any credit bureaus. But when Synchrony, PayPal’s new partner, took over, it began reporting things like late payments and account closures to credit bureaus.

According to Lisa Lanspery, Synchrony’s senior vice president of corporate communications and public relations, a letter and email went out in April 2019 telling PayPal Credit account holders that this change in hands would lead to a change in credit reporting starting in October. But many account holders—like Fitzpatrick and Rose—say they never received those letters.

“PayPal takes the financial health and protection of customers seriously, and PayPal Credit customers were clearly notified of credit bureau reporting in the change in terms that became effective in April 2019,” said Darrell Esch, the senior vice president for PayPal Credit, in a statement.

Lanspery said a hard inquiry, credit limit and balance, full age of the account, highest balance achieved, and payment history since June 2019 are now reported by Synchrony on behalf of PayPal Credit to TransUnion, Equifax, Experian, and Innovis.

PayPal is an online payment processing platform with 305 million active users—counting customers of PayPal, Venmo, or other services in its portfolio—who send, receive, and hold funds in 25 currencies worldwide.

PayPal’s main product is a digital alternative to things like checks and money orders, enabling users to transfer money electronically. It began issuing credit lines in 2008, when it acquired Bill Me Later, which was renamed PayPal Credit in 2014. The credit lines can be used to pay for transactions on PayPal’s platform immediately or over time with deferred interest.

In May 2015, the CFPB brought a case against PayPal Credit, alleging PayPal used deceptive practices to essentially automatically sign up users for credit accounts and have them pay for transactions with PayPal Credit when they signed up for regular accounts. Rose now suspects this is how her account was opened.

PayPal ended up settling without confirming or denying the tactics described. The company was ordered to pay $15 million in redress to affected consumers and $10 million to the CFPB’s civil penalty fund, and a spokesperson from PayPal said the penalty was completed. It also had to create and adhere to a compliance plan that changed the processes by which customers signed up for, were billed, and paid for PayPal Credit.

Josh Criscoe, head of financial communications at PayPal, maintains that processes were changed to ensure that any new account holders were aware of their open account by increasing disclosures and alerts on the platform.

“I can assure you there’s nothing nefarious going on here in terms of people signing up for accounts without them knowing,” he said of current practices.

While the CFPB settlement required PayPal to “reimburse consumers who were mistakenly enrolled in PayPal Credit,” there were still users who were unaware they had accounts until a few months ago. And if they don’t check their credit reports regularly, some may still have no idea.

How this is affecting credit scores

To calculate credit scores, credit bureaus take many factors into account, including the number of credit lines open and closed, average age of open credit accounts, total amount of credit available, delinquencies (a failure to make a bill payment on time), and the number of hard inquiries (a note that a financial institution pulled your credit report while making a lending decision) on a credit report.

By adding just one more line of credit, like PayPal Credit did to the reports of users, a consumer’s average age of accounts, total credit available, and number of hard inquiries change, thus altering their credit score. And when late payments or closed accounts are added to the mix, scores can really plummet, affecting a myriad of things like your ability to get a loan or be approved to rent a new apartment.

Chad Harris, a PayPal Credit user and self-professed personal-finance connoisseur in Minneapolis, said he was lucky that PayPal Credit’s addition to his report didn’t dock his credit score noticeably.

“If you were a younger person with a very short credit history, very low credit availability, and all of the sudden have this happen with your credit report, unbeknownst to you, like it did with us, that could move your score 50 to 100 points,” he said. “And if your score moves at the worst possible time, and you’re at the bank trying to get a loan or something, that could be very, very bad.”

After a few months, Rose received an email telling her that there was no evidence of fraud, and that she had access to her PayPal account again to conduct business. But she never got any answers.

“So the account I never knew was open—never knew existed—closed, which docked my credit. And then I tried to figure out how that could be if this account didn’t exist, and rather than them addressing that, they just said, ‘Nope, it did exist. End of story,’” Rose said. “And I’m not going to fight these guys over literally zero dollars, but something fishy happened.”

Users in this situation looking to remedy their issues with PayPal Credit can take two approaches, according to Bola Sokunbi, CEO and founder of Clever Girl Finance.

“You’re either pursuing financial wellness to build wealth or you’re pursuing a good credit score to buy something,” she said.

If you’re looking to build wealth, Sokunbi said you should close the account to eliminate the temptation to use that credit. But if you are worried about your credit score generally, or as you prepare to make a large purchase like a house, you should leave it open. Your credit may have dipped momentarily from this new reporting addition, but it will come back up in a matter of weeks or months, according to Sokunbi.

Fitzpatrick said he decided to keep his PayPal Credit account open but wanted to immediately pay off any purchases made using the service. This, he said, will help his credit score by keeping his total credit availability higher and total credit utilization lower as he prepares to apply for a loan to build an addition onto his house.

Harris said he chose to close his PayPal Credit account to be rid of the extraneous account that he didn’t want to keep track of. To do so, he simply had to call PayPal Credit’s customer service line. There is currently no way to close a PayPal Credit account online or in the app. Some credit card companies allow you to cancel via an online chat with a representative, but many require a phone call like PayPal does.

—Is this your first stock market crash? Some advice for young investors
—Here are two of the biggest losers from the Saudi Arabia oil price war
—Why investors suddenly turned on pot stocks
—Here are some of the most extreme ways companies are combating the coronavirus
—Why it’s so hard to find the next Warby Parker