Monetizing fear? The future of anti-rape technology—and its decade of failure 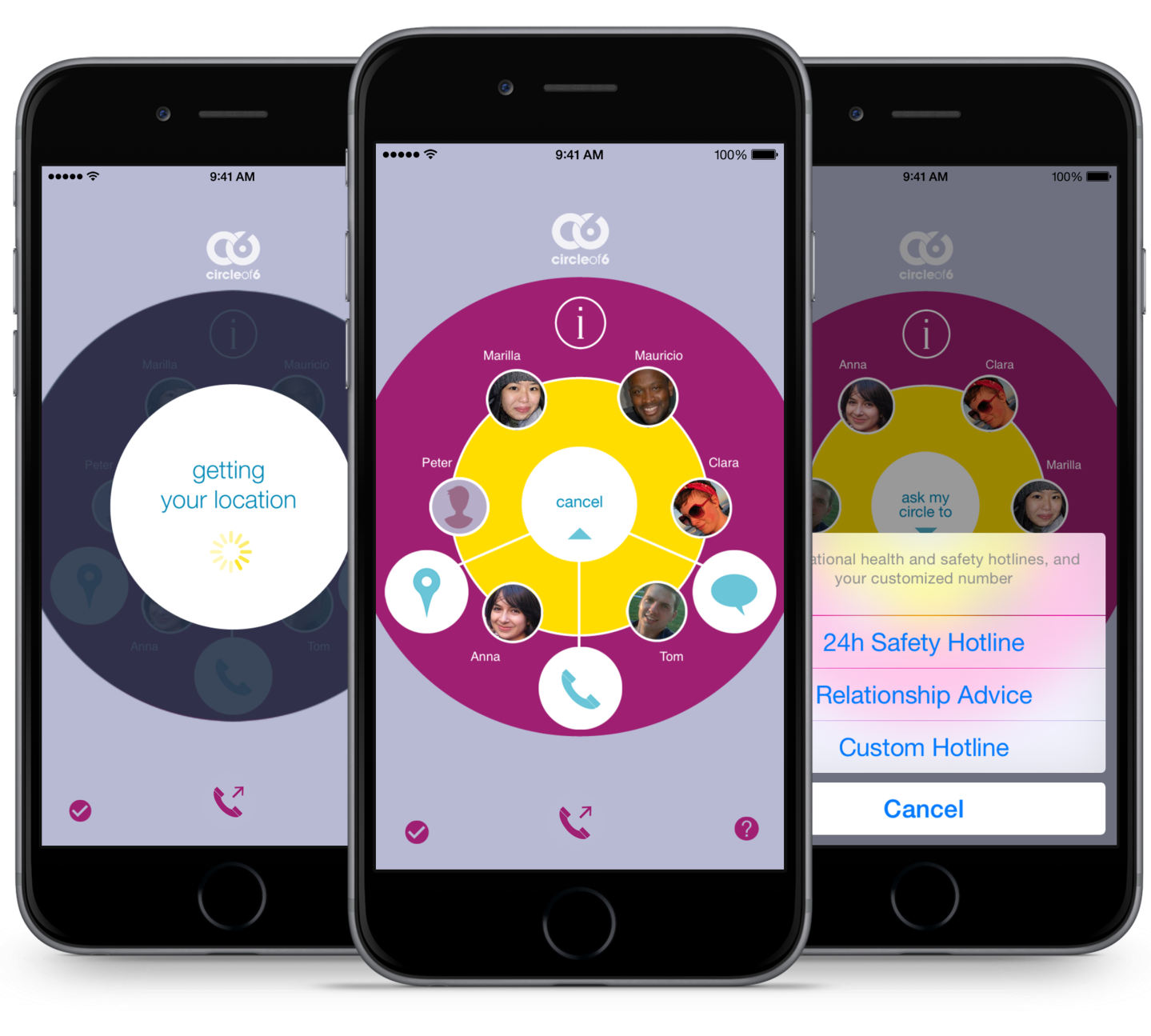 Circle of 6, an app meant to prevent rape in which users enter six of their most trusted contacts.
Circle of 6

In 2011, Nancy Schwartzman started developing a mobile application to move the psychology of bystander intervention into an increasingly online world. Technology aimed at preventing rape had long put the onus on the individual, but what if an entire community could take responsibility for preventing sexual assault?

By 2012, she had created Circle of 6, an app in which users enter six of their most trusted contacts. Should a risky situation arise, users can tap an icon to send a text saying, “Call and pretend you need me. I need an interruption.” Another function sends GPS coordinates with a message saying, “Come and get me. I need help getting home safely.” The app, originally created for campuses, is now available to everyone for free—with some 350,000 downloads since its launch.

It might not be a perfect fit in all situations, but it capitalized on the micro-communities that women and young people already rely on, diffusing dangerous situations with the help of others. At the same time, it created an opportunity for dialogue about the far-reaching problem of sexual assault, as friends downloaded the app and asked to be in each other’s circles.

“This is survivor-led technology. This is a solution built by folks who know what it’s like and who know what the threat model is,” Schwartzman, now CEO of Circle of 6, says.

If Circle of 6 was a promising start to the decade, much of what followed has been a parade of failure. In 2013, we saw anti-rape underwear. The middle of the decade witnessed One Scream, a voice-activated app that sends for help if it hears you screaming. There have been wearable alarm systems, female condoms with teeth, and roofie-detecting nail polish.

After the #MeToo movement in 2017, a rush of technology emerged as tech newcomers have looked to what role they can play—and how they can profit—amid the current reckoning surrounding sexual violence.

As Schwartzman explains: “The mentality of ‘I’m going to disrupt the shopping industry’ can’t just be applied to rape.”

By understanding where these products went wrong, the next generation of tech wunderkinds might be able to do better.

What happens when the tech innovators of Silicon Valley—itself a hotbed of gender discrimination—take a shot at solving the most intimate form of violence? The tech world overwhelmingly seems to approach rape in the same way it tackled food delivery or ride sharing, as though looking for a silver bullet.

Whether a product came out in 2010 or 2019, wearable tech in particular has frequently worked off the assumption that potential victims will be fighting off an assailant who’s a complete stranger. This tech can take the form of an alarm, a panic button, or any kind of wearable weapon unlikely to be used with a friend or partner. Products like Xantus, a bracelet that detects common date-rape drugs, or “Safe Shorts,” which emit a 140-decibel alarm if someone tries to remove them, have surfaced in the past few years alone. They rely on the “stranger danger” model, in which potential victims are on their guard and ready to fight.

But data consistently disproves the idea that most assaults take place late at night, when someone is arbitrarily set upon by a shadowy perpetrator. Around eight in 10 rapes are committed by someone known to the victim, according to statistics from the Rape, Abuse, and Incest National Network (RAINN). The U.S. Department of Justice suggested that this number is even higher when it comes to children and college students, putting it closer to nine in 10.

Before putting out a product, creators need to ask: “Is it going to work in all situations? Is it going to give people a false sense of security? And how realistic is the situation it’s designed to address?” Scott Berkowitz, the founder and president of RAINN, tells Fortune.

Invi, a skunk odor–emitting bracelet that went on sale in 2017, was seemingly created with this exclusive (and where it concerns the majority of sexual assaults, statistically rare) scenario in mind. When threatened, wearers break a single-use canister on the approximately $78 bracelet to release a foul smell (it’s unclear how the smell would affect its wearer). This type of accessory seems to put the pressure on wearers to prevent their own assault, ignoring the fact that victims might be reluctant to fight back against an assailant who is a friend or partner.

When faced with the potentially problematic aspects of his invention, Invi’s founder Roel van der Kamp tells Fortune he was trying to “raise awareness” about sexual assault. Van der Kamp says he consulted sexual violence experts in the development of his product, but by his own assessment he had little sense that rape was such a prevalent problem, until he started doing research in 2012.

“As a guy, I was a bit amazed that it also happens a lot in our societies, but at the same time, you don’t hear a lot of people talking about it,” he says, noting that the #MeToo movement has changed that.

“I think there’s a gendered assumption that only people who are the target of sexual assault will have apps,” says Brenda Smith, a professor of law at American University focusing on the intersections of gender, crime, and sexuality.

Consent apps in particular reveal one of the frequent traps of tech-based assault prevention: an attempt to erase the gray area instead of looking for dynamic solutions. Going through a laundry list of sexual acts is neither a natural nor a practical way to solve this problem, according to Smith.

“The nature and the fluidity of sexual interactions make it very difficult to have the app as the savior,” she says.

A victim problem, a woman problem

While the technology behind some of these products and initiatives might be distinctly 21st century, the philosophy behind them isn’t always so far removed from the dark ages of chastity belts, according to sexual violence experts.

Sexual assault, these products seem to imply, is a victim problem. More specifically, it’s a woman problem, something that happens when women put themselves at risk, rather than a systemic issue that individuals are often powerless to prevent. It takes male assailants out of the equation and erases other constituencies from the question—transgender people, children, and the elderly, for example.

The most promising technologies are—like Circle of 6—taking the focus off the individual, while aiming to educate the community at large.

Callisto, a nonprofit that has expanded rapidly in the past few years to help college students document assault, is set to double the number of campuses where it operates by fall 2020. The program allows students to create a report of their assault, with the app connecting survivors of the same assailant through their Title IX office—even if the assaults occur years apart.

Survivors are often reluctant to report for a whole host of reasons—from fear of not being believed, to the protection of their identity, to uncertainty about the legal definition of rape—but knowing that there are multiple victims often gives survivors the strength to report. The fact that Callisto connects survivors of the same assailant to a Title IX office—rather than to each other or to a legal option—both protects against false reports, while cushioning the barriers to coming forward. Since then, apps have taken a similar approach and updated it for the workplace or for a broader user base. Apps such as tEQuitable and AllVoices have cropped up recently to tackle the issue of workplace harassment and misconduct in particular.

“#MeToo has shown, in a disturbing way, that women are frequently not believed unless two or 10 or 60 of them come forward together,” says Sejal Singh, a Harvard Law student and former policy coordinator for Know Your IX, a national campaign to end gender-based violence in schools. Singh has advocated for Callisto in her work with universities, saying, “Callisto enables people to come forward together and to have each other’s back.”

JDoe, another reporting app, matches survivors to lawyers—a service that law firms pay $10,000 to $500,000 per year to access. The lawyers on JDoe come exclusively from civil firms, meaning that any claim filed through them cannot end in jail time for the perpetrator—but rather in damages, of which the firm takes a sizable cut. When I ran a test report through the app, it referred me to a personal injury lawyer.

To be fair, criminal charges are extremely rare for rape cases. Prosecutors take on approximately 10 cases for every 1,000 rapes, and even fewer result in felony convictions, according to data from the FBI and the Department of Justice. But JDoe’s claim to hold “repeat offenders accountable once and for all” seems at least a little misleading, since these types of lawsuits do not have the power to take a perpetrator off the street.

Other tech solutions in the future might look less like an app or a gadget and more like existing software programs. Companies like Thorn, which aims to defend children from sexual abuse, have started licensing a series of assets from Microsoft, including algorithms, to help root out child sex abuse online. The technique, available for free, crawls chat histories in order to rate how likely it is that a particular person is “grooming” a potential victim. It then sends those reports to a human moderator who can take action.

As we look toward 2020, experts say anti-rape technology must take a community-oriented approach. That means education and support systems that extend as far as possible before the potential moment of assault—and in the immediate aftermath too. The most revolutionary technology will never be limited to gadgetry, or an app, so much as the spread of participation and shared responsibility in ending sexual assault. These technologies aren’t simple, nor do they promise an easy fix. Instead, they offer dynamic access to support, resources, and open lines of communication.

“There absolutely is a place for tech,” says Professor Vera-Gray. “But it’s about tech being involved with your local rape crisis center, your local women’s refuge, and talking to them about how you as a company can use your profits, and use your expertise, and use your knowledge to end violence against women—rather than how you can monetize women’s fear of sexual violence.”

—What the world’s biggest economies are doing to fight coronavirus and recession
—Will donors of color invest in white presidential candidates?
—Big business rallies behind Joe Biden
—How swing state economies have performed since the 2016 election
—Listen to Leadership Next, a Fortune podcast examining the evolving role of CEO
—WATCH: What happens to leftover campaign funds once a candidate drops out?