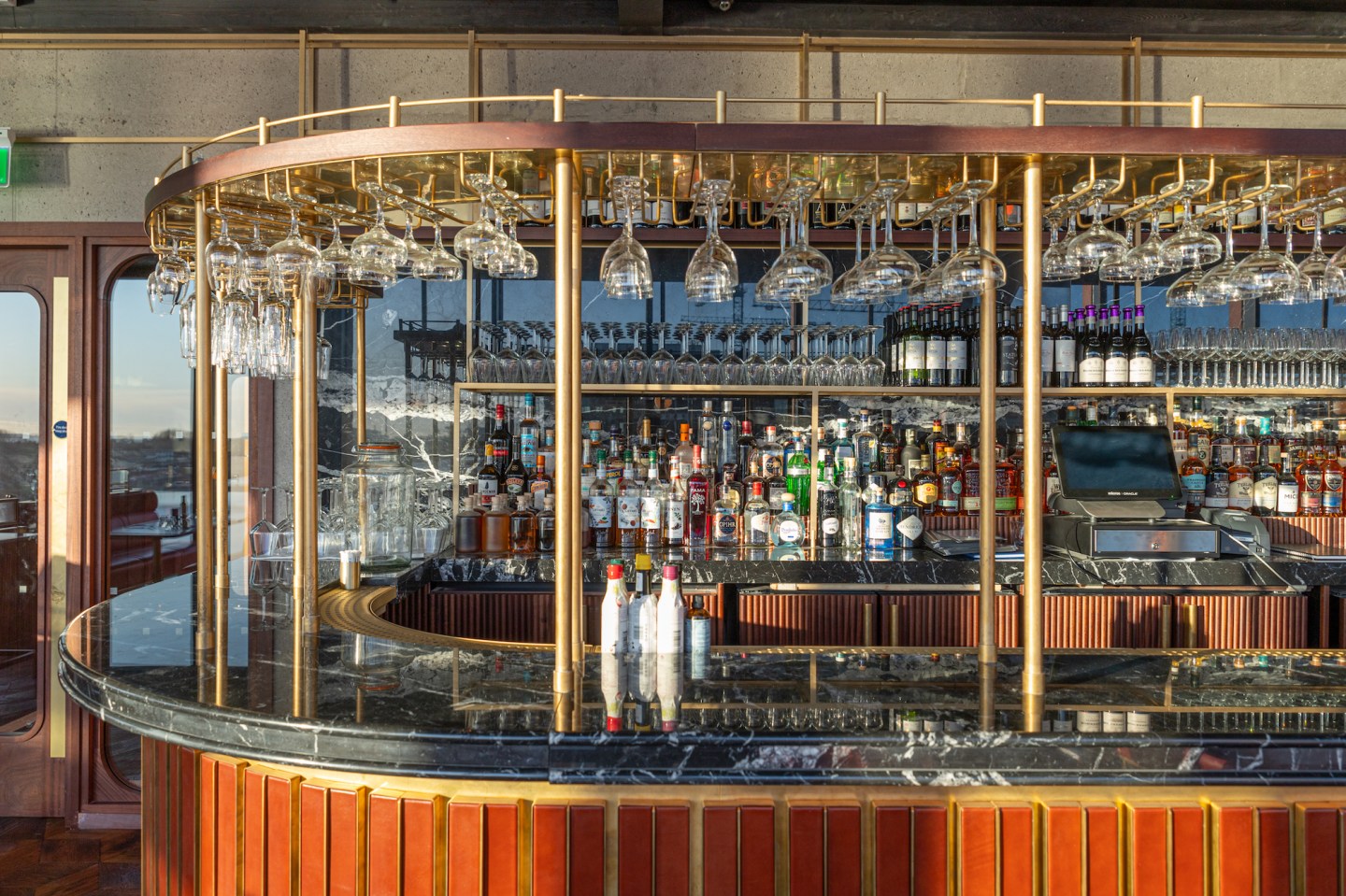 Surrounded by glass, Ryleigh's rooftop restaurant and bar at The Mayson has jawdropping views of Dublin Bay and the Dublin Mountains—when the weather permits.
Courtesy of Jason Ennis Press Up Entertainment

Ireland was one of the worst-hit countries during the 2008 economic downturn. The Celtic Tiger, the moniker for the preceding period of incredible economic boom, plummeted into a recession that at its depths yielded a 15% unemployment rate. And that despair was quite obvious in Dublin—the streets of the once-thriving capital became the stomping ground for countless riots and protests.

But recovery would eventually repair a lot of that damage, and, in fact, Dublin of today could be stronger than ever. The city has rebounded spectacularly, thanks to many of the planet’s top tech companies (Google, Facebook, Twitter, and LinkedIn are just a few) calling it their new European home base. In fact, one riverside neighborhood became so inundated with techy tenants that it has been nicknamed “Silicon Docks.”

Dublin’s stunning renaissance continues apace in the hospitality sector as the city seems to welcome a new hotel every week.
Courtesy of Jason Ennis Press Up Entertainment

That growing workforce there inspired the opening of various other venues as well, from fancy condos and business-minded hotels to restaurants and shops. One of the area’s buzziest openings is The Mayson Dublin, a design-forward boutique hotel from one of Ireland’s most prolific hospitality brands, Press Up Entertainment Group. Two of the area’s remaining historic structures have been brought to life with 94 guest rooms, numerous dining concepts, and a brand-new fitness brand, proving that Dublin’s stunning renaissance continues apace in the entertainment and lifestyle sector too.

“The Mayson needed to be remarkable,” says Bryan Davern, who heads Press Up’s hotel projects. “Not just another generic hotel in a city that has seen a lot of hotels built over the last four years.”

To set itself apart, a commitment to the Docklands’ history has become a big part of the hotel’s DNA. While many of its immediate neighbors are modern, steel-and-glass towers, The Mayson occupies two landmark red-brick buildings from the 19th century: an industrial timber warehouse and a townhouse most likely used by the shipping and sailing industry as a bar and guesthouse. For Press Up, to maintain the architectural and historical integrity of these buildings is meant to add soul and warmth to a pocket of the city dominated by glistening contemporary structures.

Inside the The Bottle Boy, a pub dating back to 1860, set within The Mayson.
Courtesy of Jason Ennis Press Up Entertainment

“The Mayson was designed as an experiential hotel,” says Ann-Marie O’Neill, one of the owners of O’Donnell O’Neill Design, the agency tapped to oversee The Mayson’s interiors. “We designed most of the light fixtures and furniture items to create a truly unique environment in whatever part of the hotel you are in.”

Indeed, every section of the hotel offers a different design narrative, creating a visual journey for its guests. Serving as the unofficial hotel lobby, the entrance space is outfitted with floor-to-ceiling Crittall windows that admit an abundance of light, illuminating the original brickwork juxtaposed by decorative, hand-stitched leather panels.

Adjacent is an interior courtyard with a lush vertical garden that extends to the floors below, providing a verdant backdrop to the tightly curated health and fitness club, which includes a high-tech gym, a small pool, sauna, and dedicated rooms for various classes like spinning. (The Mayson actually inspired Press Up to launch another arm of the business with Power Gym, which allows for local membership.)

The Mayson Dublin stitches together two historic buildings for a stylish industrial aesthetic unlike anything else in the Irish capital.
Courtesy of Jason Ennis Press Up Entertainment

The 94 guest rooms are split between the two buildings. Eighty-seven are in the warehouse, thanks to the addition of a multifloor tower over the original structure. On the first two floors, each room comes with a red-brick feature wall of the warehouse, while rooms on the floors above are given floor-to-ceiling windows that look over the river and out to the city. Stained rosewood walls, quilted leather headboards, framed artwork by local artists, mini Smeg fridges, and Dyson hair dryers can be found in every room, whether it’s the best-for-one 130-square-foot small double room, which starts at $150, or a suite (from $600), which is much larger at 485 square feet and comes with a stand-alone copper tub.

The seven units in the townhouse, which open to the public in April, are similarly priced. Inspired by its history as a pub-and-inn venue for sailors passing through, the interiors feature a more nautical aesthetic, and the dimensions are identical to the original rooms of the building. These are generally a bit cozier in style: Some have marble fireplaces, but truly, no two are alike. Says O’Neill, “We imagined rooms that had a simple charming aesthetic with whitewashed timber-clad walls and homely patterned furniture and beds.”

Unless a guest springs for one of the larger units, the rooms, while stylishly rendered, can feel cramped, especially the ones in the warehouse. The bathrooms are beautiful little jewel boxes with glazed navy titles and gorgeous terra cotta sinks, but teeny-tiny. Thankfully, there is a lot of on-property activities to keep guests entertained outside their rooms. The lobby area is often busy with laptop-toting guests (and locals working from home) sipping lattes from the on-site Dime Coffee Bar, another Press Up project. This area flows into The Mayson Bar, a vintage-feeling restaurant (with its floral upholstered seats, exposed brick walls, and custom chandeliers) serving sharp cocktails and an all-day menu of seafood chowder and superfood salads.

A wedge of Irish cheddar cheese, the perfect accompaniment for a locally brewed pint of beer.
Courtesy of Jason Ennis Press Up Entertainment

On the rooftop, there’s Ryleigh’s Rooftop Steakhouse. From its windows, the Dublin mountains are visible. From its meat-centric kitchen, there’s herbaceous cheesy risotto topped with sausage and a selection of grilled meats that can be made even more decadent when crowned with foie gras. The bar is mixing exceptional cocktails too.

During brunch, if bartender Marian is there, he can whip up a chunky Bloody Mary with just enough of a kick; this is inspired by a secret concoction he learned from his Romanian grandmother. On the townhouse’s street level, The Bottle Boy pub has become a popular all-day hangout for workers in the surrounding offices. That space used to be a pub way back when, and today that dark-wood vibe has been maintained in homage, same as the live traditional Irish music that happens a few nights a week.

—After SXSW cancellation, Austin hotels and restaurants are bracing for a rough road
—How this multi-city annual art fair is making art more accessible
—Why now might be the best time to buy plane tickets even amid coronavirus
—From Wuhan to Seattle, the coronavirus cuts deep into local businesses
—WATCH: Can San Francisco Be Saved?