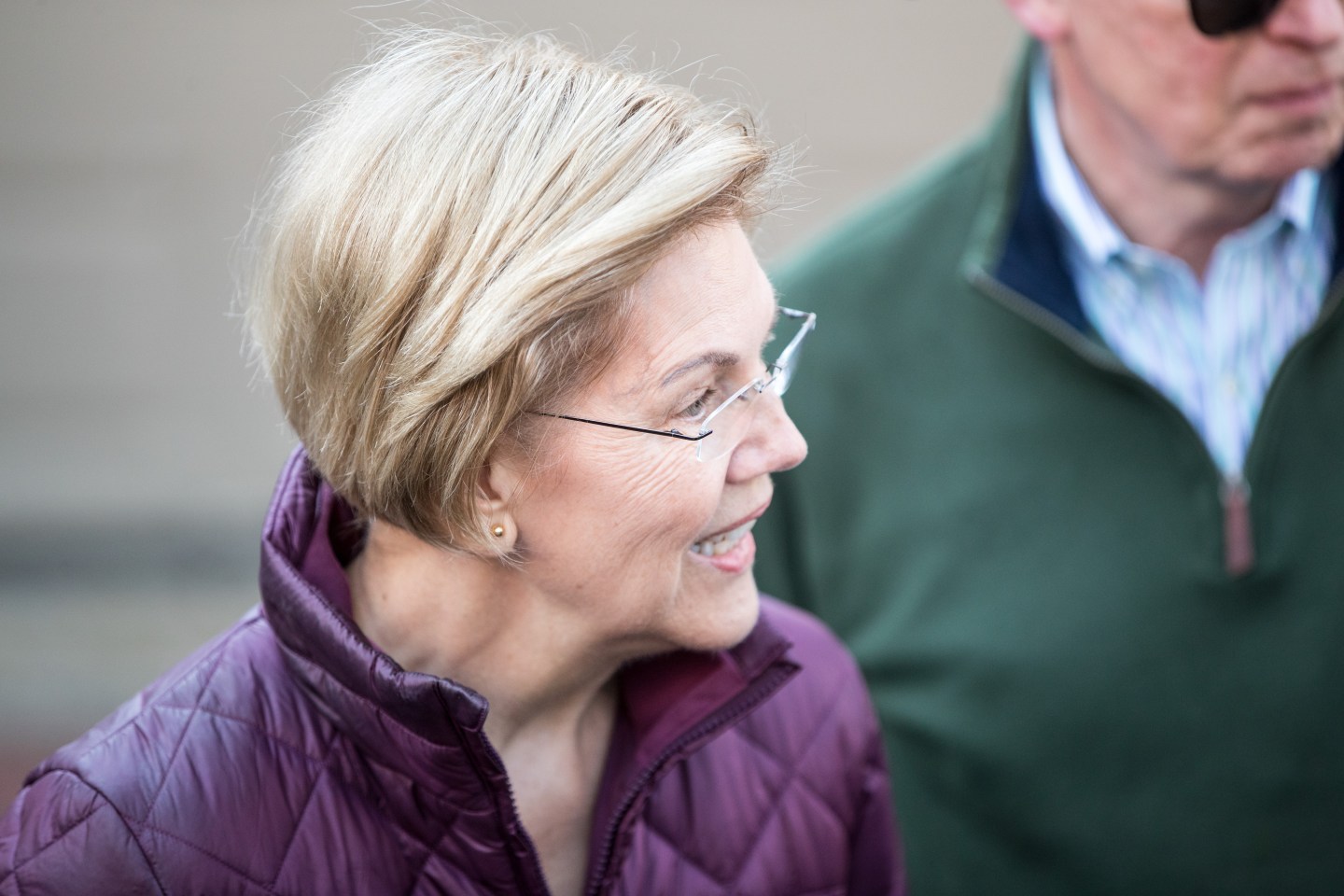 Good morning, Broadsheet readers! Leadership of the global health system is dominated by men, the NHL gets its first all-female broadcasting crew, and we ponder the significance of a female Veep pick. Have a productive Tuesday.

– No. 2 or no, thanks? When Sen. Elizabeth Warren announced last week that she was withdrawing from the presidential race, the heartbreak felt by a portion of Americans was unmistakable. Many of those mourning were true blue Warren loyalists, of course, but for some the pain was less specifically tied to the Massachusetts senator—and more spurred by the realization that, once again, the hope for a female president had been dashed.

So, what should we make of the Democratic conversation around what the New York Times dubs the “second highest, hardest glass ceiling”—the vice presidency? There’s a lot of talk in the party that no matter which of the two “septuagenarian white men” prevail in landing the nomination, his veep should be a woman, and ideally a black woman.

Both Biden and Sanders have expressed enthusiasm for the idea, so the speculation is on—could it be Kamala Harris? Amy Klobuchar? Stacey Abrams? Even Warren herself?

But not everyone who hopes to eventually see a woman in the White House is so enthused about the idea that the first to do so would be relegated to the No. 2 spot. And at time when part of the electorate is so vocally ready for a break from the string of men who’ve held the Oval Office since—well, since it was built—it’s hard not to see such a pick as something akin to window dressing. As Jennifer Lawless, a professor at the University of Virginia tells the Times: “It’s sort of like an ‘insert woman here’ kind of conversation.”

I’d love to know what all of you make of this. If you have a strong opinion—and I bet some of you do!—drop me an email. We may include your response in a future Broadsheet.

- Courting Elizabeth. Speaking of Warren, there's an ongoing race between the Biden and Sanders camps to secure her endorsement now that she's ended her own campaign for the Democratic nomination. The outcome is especially hard to predict since polls show her supporters now splitting evenly between Biden and Sanders. Yet the key to winning Warren's backing reportedly comes down to what was so fundamental to her own campaign: Substance. New York Magazine

- Rough patches. An oil slump and coronavirus uncertainty roiled markets yesterday; one especially big loser was Katrina Lake's Stitch Fix, which plunged almost 40% in extended trading after the online styling service slashed its full-year sales and profit forecast. Meanwhile, the coronavirus forced GM to delay the unveiling of its Cadillac Lyriq crossover. Its introduction was supposed to mark the start of GM's all-electric future that CEO Mary Barra has staked so much on. Elsewhere, Bloomberg reports that the buyout of WeWork's share in The Wing knocked the valuation of the female-focused co-working space, from $365 million in 2018 to about $200 million.

- Not healthy. A timely bit of news given the way the coronavirus has put the global health system under a microscope: The leadership of that system is 70% male, finds a new report from University College London. The upper ranks of the health world are also tilted toward rich nations—only 5% of leadership position are occupied by women from low- and middle-income countries, according to the study. The Guardian

- Put to the test. The Bill & Melinda Gates Foundation is funding the project that plans to offer at-home testing kits to people in the Seattle region who suspect they may have been exposed to the coronavirus. It's not yet clear when the testing is expected to start. Seattle Times

- Ice, ice ladies. On Sunday, International Women's Day, NBC Sports made history by producing the first-ever all-female NHL broadcast, featuring about 30 women, both in front of and behind the camera. Here's how it all went down: ESPN

- Work of art. Elle takes a look at the state of women in the art world—including the female artists, curators, critics and other industry players who should be on our radar. Elle

- Pelosi's picks. Ever wondered what kind of movies Speaker Nancy Pelosi likes to catch in her off hours? This profile will quench that curiosity—and provide a peek into who in the entertainment industry supports Pelosi, and why. Variety

- Trump's gender gap. According to a WSJ/NBC poll, 24% black men say they approve of Trump’s efforts while in office—but the that share drops to 6% among black women. What's with the gender gap? Vox investigates: Vox

TikTok has a pro-anorexia problem Wired

We're not talking to our girls enough about money CNN

"My message to girls is, fight on, little ladies."