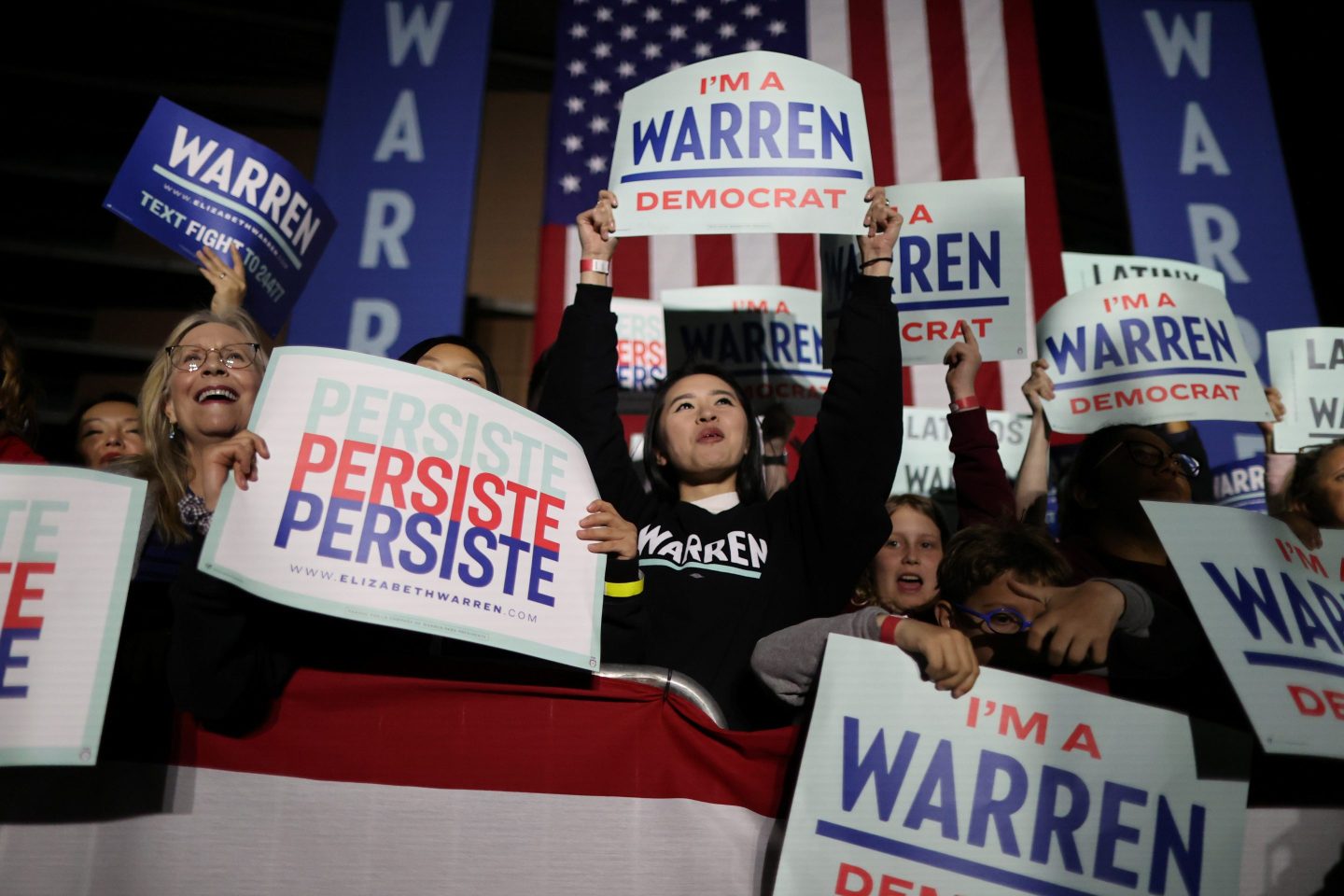 Last week, Sen. Elizabeth Warren suspended her campaign for president, essentially eliminating the chances that this cycle would produce America’s first female commander-in-chief. My social media feed reflected collective disappointment and sadness. Even if Warren wasn’t your desired candidate, it never felt like she, Kamala Harris, Amy Klobuchar, or any other female candidate got a truly fair shot.

But you should also be proud. Not only did Warren make an impression on little girls everywhere about dreaming big and fighting on, her candidacy sent a strong message to boys too. Normalizing women as viable presidential candidates is important—even if we are not yet content with the outcome.

That’s why instead of feeling discouraged, I feel hope. For more women to run for president in the future thanks to the paths cleared by Warren and Clinton, but also for all women seeking leadership, board seats, and funding. Here are three reasons to feel hope versus despair as a female leader this week:

In 2018, a record number of women ran for the U.S. House and Senate. We witnessed the election of the first Native American and Muslim women to Congress. And 37% of the women serving in Congress are women of color.

In my home state of Massachusetts, Warren is just one of many women blazing the trail for the next generation on the national stage, with Ayanna Pressley and Maura Healey following her lead. Both women joined Warren frequently on the campaign trail, demonstrating a sisterhood in power that simply didn’t exist a decade ago.

But the female camaraderie is evident beyond the campaign trail. It’s noticeable in boardrooms too. When I first started at HubSpot, we had one woman on our board. Now, we are proud to have three women. The data shows we aren’t alone: After years of hovering around 16%, women now represent 27% of the S&P 500 board seats. I watch with great admiration as the women on our board advocate for, recommend, and cite amazing women in their networks for leadership roles.

The despair of last election cycle was followed by massive increases in the number of women running for office, and many of them are now using their offices, positions, and political resources to create space for even more women in power. I suspect we’ll see the same trend in the world of business, and that a powerful network effect will emerge as a result.

Women are taking charge of the narrative

One of Warren’s shining moments in the spotlight was reminding us all that your voice is a powerful weapon. Her defiance of attempts to silence her objection to the confirmation of Jeff Sessions as U.S. attorney general before her campaign even began led to a seminal moment and catchphrase that has taken on a life of its own. It was this feat of strength that caused an exasperated Mitch McConnell to utter “Nevertheless, she persisted,” now a pillar statement for feminists everywhere.

Jodi Kantor and Meghan Twohey persisted in remarkable reporting to share the stories of Harvey Weinstein’s victims, completely reshaping the public narrative and ultimately leading to his criminal conviction in February. Greta Thunberg is shaping the global narrative on climate change singlehandedly. Ava Duvernay is blazing new pathways for underrepresented stories to be told by more diverse filmmakers and production teams. These women inspire me because they weren’t content with continuing an existing narrative; they created their own, and that bodes well for all of us.

You should also be proud that the candidate who said she’d take on billionaires did so on the debate stage. Even without winning, she made Bloomberg account for his disgraceful comments about women (alleged in the book The Portable Bloomberg), dealing him blows that essentially ended his campaign.

Men should be held accountable for their behavior toward women. Not just in a soundbyte, not just in a campaign video, but in the everyday course of their careers and personal lives. The fact that male candidates are being held to stronger account on these issues is progress, even if it doesn’t feel like enough yet.

Diversity and representation used to be a “nice to have” for companies, and there was very little holding them accountable other than press coverage. Now, given the public pressure led by women, stronger scrutiny measures have been put in place, such as California requiring companies to have a female director on their board and Goldman Sachs no longer taking companies public without a female board member.

These changes aren’t confined to the policy level. At HubSpot, we get more questions than ever from job candidates of all genders about pay equity and diversity—and this is happening all over the business world. Employees can choose to work at a place that doesn’t just talk about diversity, but actually makes it a priority.

Warren persisted in her race; now it’s our turn. Instead of getting down, I’m getting to work. I’m going to do everything I can to blaze a trail for future leaders, to empower women and underrepresented minorities, and to create an inclusive workplace that allows everyone to be their true selves.

I believe we’ll see women presidents in my lifetime. I also believe we’ll see more women leaders of companies who will use their positions to build even more diverse workplaces. And when that happens, we’ll be proud that in spite of all of the reasons not to be optimistic, we all kept fighting.

Nevertheless, we persisted. Warren wouldn’t have it any other way.

—Coronavirus shows why we need vaccines before, not after, an outbreak
—How states can overcome new federal barriers to clean energy
—Limiting this governmental emergency power could curb presidential overreach
—Want to solve America’s problems? Start with broadband
—Why you’re mad as hell about the Astros, but not Wells Fargo