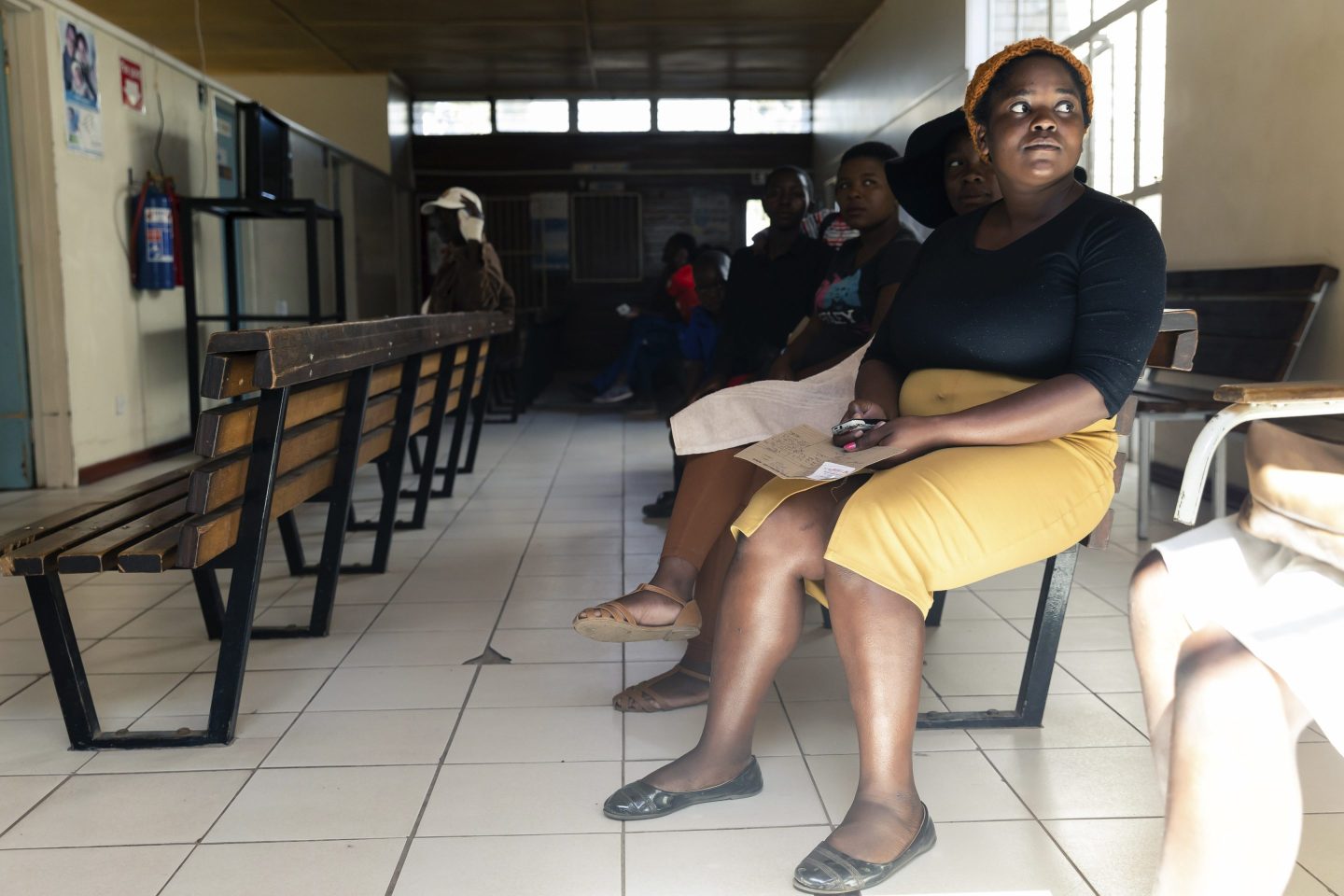 Patients sit on benches in a waiting room at Rutsanana Polyclinic in Glen Norah township, Harare, Zimbabwe, on June 24, 2019. - The health clinic is a one stop testing and treatment centre for HIV, Tuberculosis and diabetes in Zimbabwe. It's one of 10 pilot clinics offering free treatment against the diseases and also free diagnosis. In a country where public health services have practically collapsed, containing the spread of TB has been a persistent struggle. The annual number of TB infections in Zimbabwe remains among the highest in the world. (Photo by Jekesai NJIKIZANA / AFP) (Photo credit should read JEKESAI NJIKIZANA/AFP via Getty Images)
Jekesai Njikizana—AFP/Getty Images

The year was 1984. I was finishing my medical genetics training at Yale, working on the molecular genetics of disorders of human hemoglobin. I was at a job interview at the University of Michigan when one of the senior professors asked what my lifetime goal was. “To contribute to scientific advances that would lead to a cure for sickle cell disease in Africa,” I said. The professor laughed and said I was a hopeless dreamer.

That same year I saw my first case of HIV/AIDS. It was heartbreaking. This young man was wasting away in front of us, his body ravaged by infections that were taking advantage of his devastated immune system. There was little we could do, and he died in just a few weeks. I promised myself if there was ever a chance to help find a cure, I would do so.

Fast forward to today. The National Institutes of Health (NIH) and the Bill & Melinda Gates Foundation (BMGF) have just embarked on a bold 10-year program to develop gene-based approaches to cure both sickle cell disease (SCD) and HIV. Furthermore, we are committed to make this practical and affordable in low-resource settings like those found in much of sub-Saharan Africa. This is not an idle dream. We aim to make it happen.

Sub-Saharan Africa is home to the majority of the world’s people with SCD, an extremely painful and debilitating blood disorder. We also know that approximately 100,000 Americans in the U.S. are affected. SCD is more common in sub-Saharan Africa because while individuals who inherit two copies of a certain gene variant develop SCD, those who carry just one copy have a survival advantage against malaria, a mosquito-borne infectious disease prevalent in the region. As a result, over the course of millennia, sickle cell carriers have become more prevalent in the sub-Saharan African population, which in turn has increased the numbers of children born with SCD.

Gene-editing approaches for SCD that are now being tested in the U.S. and other developed nations show great promise. However, they require bone marrow stem cells to be removed from the body of an affected child or adult in sterile laboratory conditions, and then, after a risky bone marrow ablation to “make space” for the corrected cells, reinfused into the patient. This usually requires a long period of high-intensity care in a hospital setting. While such approaches hold great promise, they are currently impractical and prohibitively expensive in developing regions, including sub-Saharan Africa.

As for HIV, about 67% of the 38 million people infected with the potentially deadly retrovirus live in sub-Saharan Africa, according to the Kaiser Family Foundation. Thanks to the global public’s generosity and availability of antiretroviral drugs, people can live near-normal lifespans. However, in low-resource areas of the world, it can still be very difficult to access or afford a lifelong regimen of antiretroviral therapy. An absolute game-changer would be the development of a gene-editing strategy to seek out and destroy the HIV genetic material that can remain hidden in the body, even after years of treatment. If successful, that could also be applied here at home—perhaps contributing to the Trump administration’s historic promise of ending the HIV epidemic in the U.S. by 2030.

To accelerate development of accessible, affordable models for curing these two diseases that can be implemented in low-resource settings, NIH, which is the world’s leading public funder of biomedical research, and BMGF recently forged a public-private partnership that plans to invest $200 million over an initial period of four years. The goal for both diseases is to develop a gene-based approach that can be given to a living person in one outpatient visit, delivering the gene correction apparatus to the appropriate tissues and requiring no significant suppression of the immune system. The dream is to initiate African clinical trials in 10 years—using procedures that are not much more complicated than receiving a blood transfusion.

Without doubt, this is a highly ambitious plan—among the most groundbreaking public-private collaborations that NIH has ever initiated aimed at a specific research challenge—and achieving its aims will be no easy task. Many of the technologies needed to achieve this bold goal do not yet exist or are in the very early stages of development. Still, the need to develop new technologies hasn’t stopped scientists from taking on big challenges in the past. An example that I am deeply familiar with is the collaborative, international effort that successfully sequenced the human genome—ahead of schedule and under budget.

But affordability poses a huge hurdle. In the past, many public-private partnerships have focused on adapting therapies developed in a very high-tech environment, trying to figure out how to modify them so they can be exported to low-resource settings. That has proven difficult because, at that point, there already may be significant patent, royalty, and other business entanglements. In our new initiative, NIH and BMGF will place a high emphasis on affordability and accessibility from the start, making very careful choices along the way to make sure those goals are kept at the forefront.

In contrast to many past research efforts involving low-resource communities, patients will be at the center of this new model. NIH and BMGF will actively pursue collaborative relationships with patient advocates, as well as scientists, clinicians, and other thought leaders in Africa to develop contextual and country-specific approaches toward achieving these shared goals.

The individuals who stand to benefit most from this initiative at first are the millions of people with sickle cell disease and HIV who live in sub-Saharan African nations, where these diseases take such an enormous toll on health and economic productivity.

In the long run, easy-to-deliver gene-based cures may help people with SCD or HIV who live in other developing areas of the world, as well as rural and other low-resource areas of the U.S. Successful gene-based technology for cures of SCD and HIV may also be adapted to cure or treat additional diseases in other low-resource settings, such as the blood disorders beta thalassemia in the Mediterranean and alpha thalassemia in India and Southeast Asia.

Ultimately, our shared aim is to make my admittedly naive 1984 dreams of saving lives come true—and advance public health. If the new one-stop, gene-based approaches prove as safe and effective as higher-tech systems, who wouldn’t choose the more convenient, less costly option? Indeed, our hope is that this unprecedented effort will yield an outstanding example of reverse innovation, in which creative, low-cost solutions originally developed to meet the needs of low-resource areas can subsequently be embraced by all.

Francis S. Collins is director of the National Institutes of Health.

—Coronavirus shows why we need vaccines before, not after, an outbreak
—How Democrats’ impeachment campaign helped Trump
—Being a CEO is more tenuous than ever. How I survived 30 years at Aflac
—How Warren Buffett built Berkshire Hathaway
—Are the Houston Astros irredeemable cheaters? Or are they all of us?