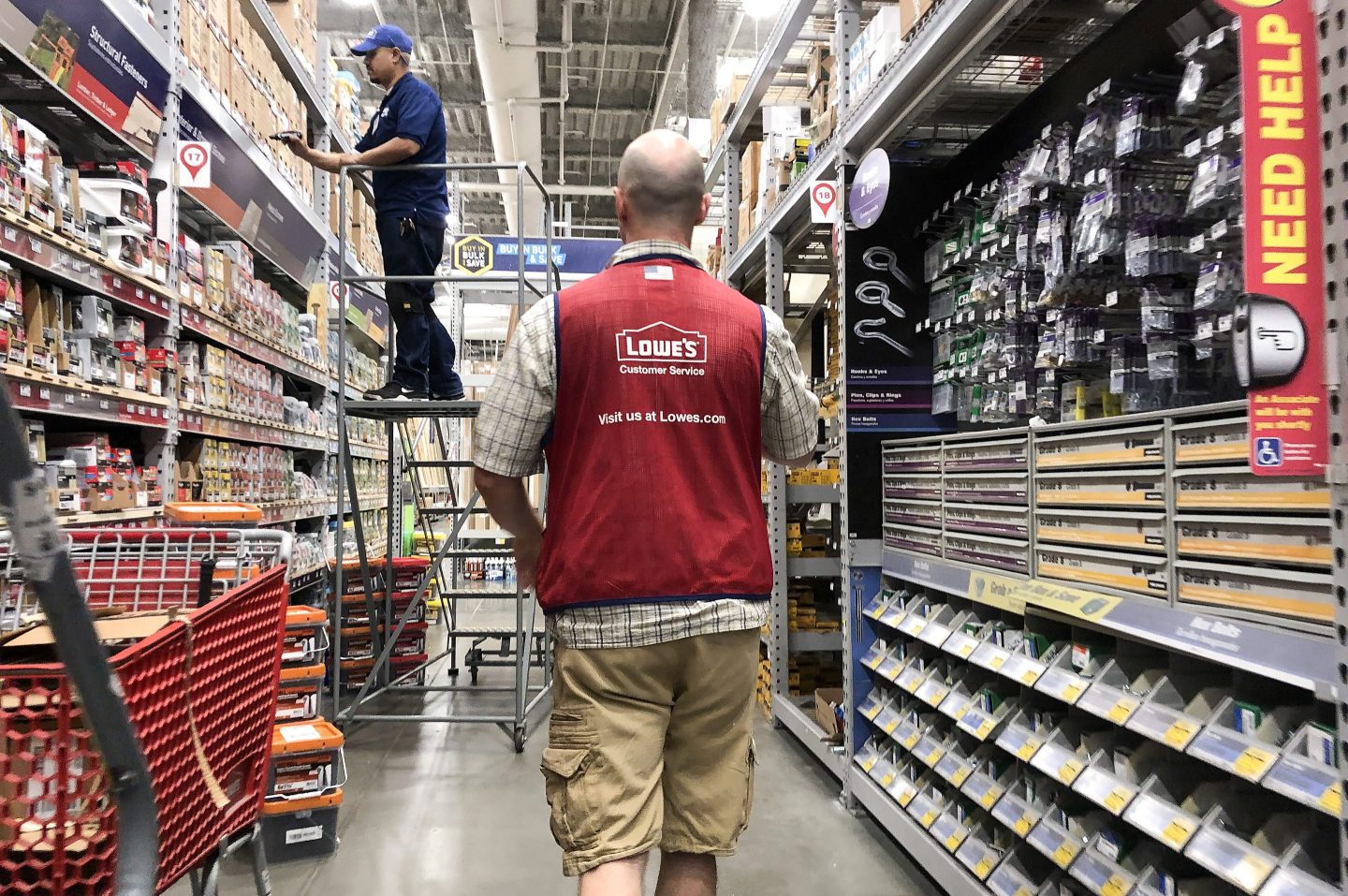 LOS ANGELES, CALIFORNIA - AUGUST 02: Employees work inside a Lowe's store on August 2, 2019 in Los Angeles, California. The home Improvement retailer is set to lay off thousands of workers in an effort to boost profits.
Mario Tama—Getty Images

In the era of the so-called retail apocalypse, reporting even modest in-store sales growth should seem close to miraculous.

But that’s not the case for Lowe’s. On Wednesday, the $72 billion-a-year home improvement giant reported a 2.6% increase in comparable sales for the fourth fiscal quarter of 2019. Up against its biggest competition, Home Depot, that figure underscored a major weakness in Lowe’s business: a lackluster e-commerce business.

Lowe’s said that sales on its website rose 3% in the quarter ending January 31. On a call with Wall Street analysts, Lowe’s CEO Marvin Ellison acknowledged that the company’s e-commerce trajectory “lags market growth.” He is right on that front: in the final three months of 2019, e-commerce sales in the U.S. rose 16.7%, according to the U.S. Census Bureau.

“At the beginning of 2019, Lowes.com was sitting on a decade old platform,” Ellison explained to the analysts, noting that the “replatforming” of the site would not be complete until sometime in the second quarter of the current year.

Ellison tried to put a good spin on the numbers, saying, “there are very few large retailers in America delivering a 2.6% comp growth almost exclusively from the brick-and-mortar stores.”

Thin consolation. As results at countless big box retailers have shown, the stronger the e-commerce growth, the greater in-store sales growth is too since both avenues feed business to each other and reinforce the overall brand.

At Home Depot, for instance, some 50% of online orders last quarter were picked up in store. Such customers typically pick up an extra item or two while at the store, and the process saves Home Depot shipping money.

Ellison said he expects the trajectory of Lowe’s e-commerce business to change in the second half of 2020. Even so, the company will have a lot of catching up to do.

Home Depot has ramped up its business-to-business website that caters specifically to professional contractors, its biggest customer segment by sales. There are 1 million customers using the site. And, pairing with that site, in-store sales staff is equipped with customer relationship management tools that catalogs what customers bought previously and what they might need for a current project.

Meanwhile, Lowe’s is still looking to improve the basic functions of its main site. Ellison was candid about some its shortfalls and pointed to the labor intensive process of adding items to its online assortment, particularly for items that will be shipped by a brand directly to the customer rather than by Lowe’s. The process is currently manual, but Ellison said he is working on digitizing that. He also conceded that basic features like giving customers the ability to schedule a delivery in a narrow time window haven’t been added to the site yet. Ellison said new features like the tighter scheduling window will be “up and going by the second half” of 2020.

The CEO of J.C. Penney before joining Lowe’s in 2018, Ellison struggled to fix the department store chain’s ailing e-commerce business despite years of promises. While Lowe’s e-commerce is in better shape than Penney’s ever was, it remains a show-me story for Ellison.

E-commerce woes and all, Lowe’s has a lot of wind in its sails thanks to the booming housing market, a trend that has also lifted Home Depot. But, unless Lowe’s bridges the online shopping gap with Home Depot, it will be much harder to eke out sales gains when the environment gets tougher.

—Contigo children’s water bottles recalled for possible choking hazard
—$13 box of health-conscious cereal could be key to General Mills
—Land O’Lakes wants you to know the farmer behind your butter
—How “for women, by women” Lola views its investor’s Trump ties
—WATCH: Inside the algorithm powering Stitch Fix