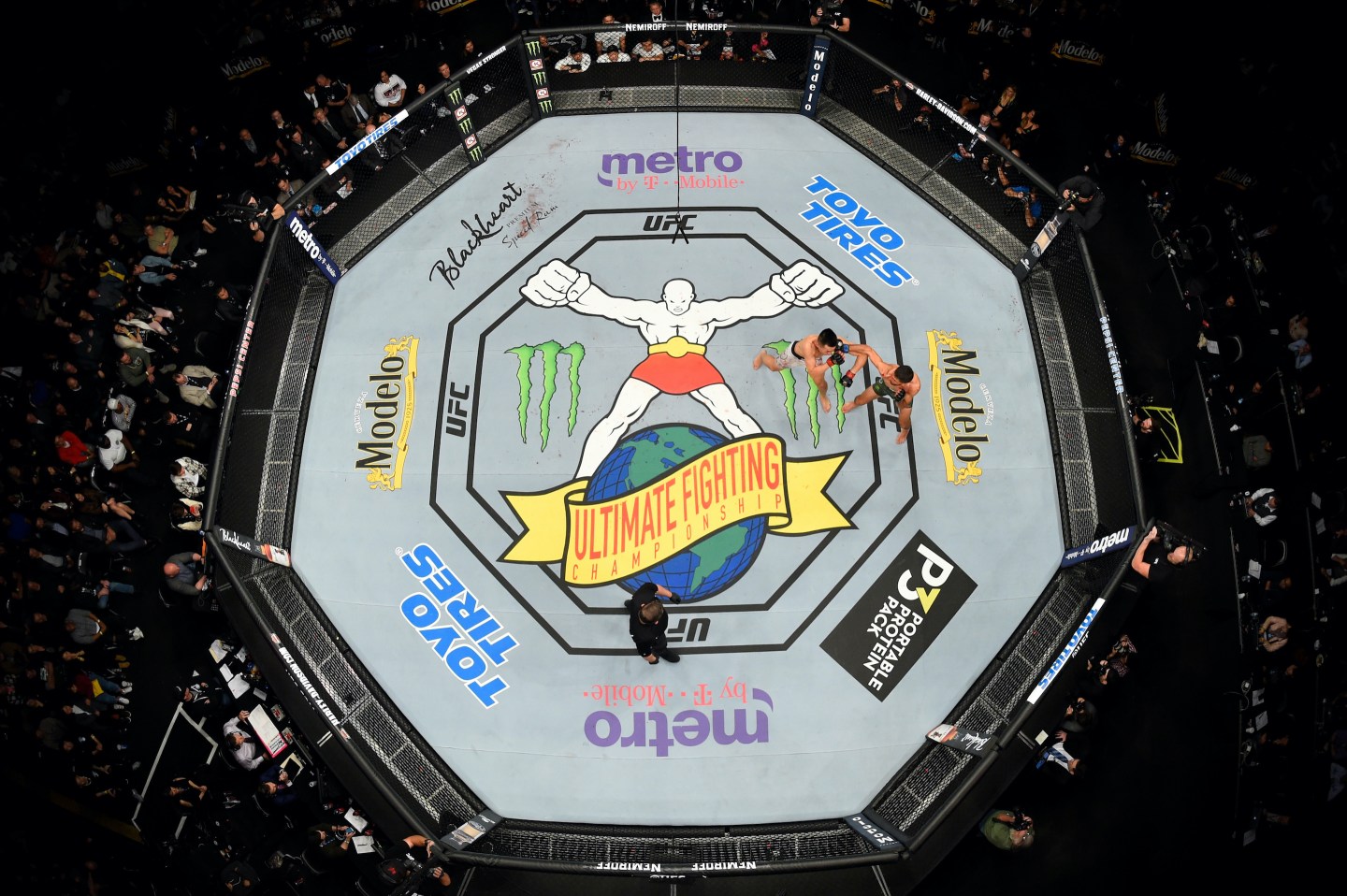 An overhead view of the Octagon as Chan Sung Jung of South Korea battles Yair Rodriguez of Mexico during the UFC Fight Night at the Pepsi Center on November 10, 2018 in Denver, Colorado. Dapper Labs CEO Roham Gharegozlou tells Fortune its UFC project will focus very much on the fighters themselves, and allow fans new ways to interact with the stars of the league.
Photo by Josh Hedges/Getty Images

Dapper Labs, a blockchain startup best known for creating collectible cats known as CryptoKitties, announced a partnership on Tuesday with mixed martial arts league UFC that will allow fans to own digital versions of their favorite fighters.

The move, which follows similar tie-ups between Dabber Labs and the NBA and Warner Music, is the latest example of the sports and entertainment worlds turning to blockchain to reach out to fans.

Blockchain is best known as the technology behind the cryptocurrency Bitcoin, and involves a shared computer network that creates a tamper-proof record of ownership and transactions.

In the case of sports, the Dapper Labs projects are loosely akin to an online version of baseball trading cards—letting fans own and collect mementos of their favorite players in digital wallets. The basketball blockchain collectible, known as NBA Top Shot, lets collectors “own” in-game highlights or special attributes like Kevin Durant’s 3-point shot.

Dapper Labs CEO Roham Gharegozlou tells Fortune the UFC project will focus very much on the fighters themselves, and allow fans new ways to interact with the stars of the league.

“UFC prides itself on being innovators in sports technology, and [the blockchain] is another way to provide our fans with the best entertainment experience,” Tracey Bleczinski, UFC’s senior vice president of global consumer products said in a statement.

Tuesday’s announcement, however, provides few specific details about what exactly fans will be able to purchase or how much the collectibles will cost. Similarly, the NBA Top Shot product was announced last summer, but the league has yet to offer anything beyond a sign up page.

This lack of clarity shows how blockchain collectibles are very much an unproven market, powered by a still-nascent technology. While the concept has stirred excitement among investors—including a recent $11 million investment in Dapper Labs from the VC firm Andreessen Horowitz and Warner Music—for fans, it’s still an abstract concept.

The closest real-world example to the sports leagues blockchain products is CryptoKitties, which became a fad in late 2017 and saw some digital cats sell for thousands of dollars. But the craze soon fizzled, in part because buying and trading the cats relied on esoteric wallet technology.

Another big obstacle to mainstream adoption has been the technological limits of blockchain itself. In the case of CryptoKitties, Dapper Labs relied on the popular blockchain called Ethereum—only to find that the Ethereum network clogged up under the cats’ transaction volume.

In response, Dapper Labs has been building a new blockchain of its own it calls Flow, which relies on a new type of architecture that Gharegozlou promises will be able to meet the demands of thousands of MMA and NBA fans.

Gharegozlou says Flow will offer a broader eco-system where fans of all sorts can build digital tools for owning and trading collectibles. “Flow is built for Gen-Z. It’s aimed at sneaker heads, not just crypto heads,” he adds.

If Gharegozlou’s vision comes to fruition, blockchain will not only offer fans a new way to own and interact with sports leagues, but provide new ways to monetize players’ talents. But moment of truth for won’t likely come until later this year, when Gharegozlou says the Flow technology will be released to the public.