Equity is essential to economic opportunity 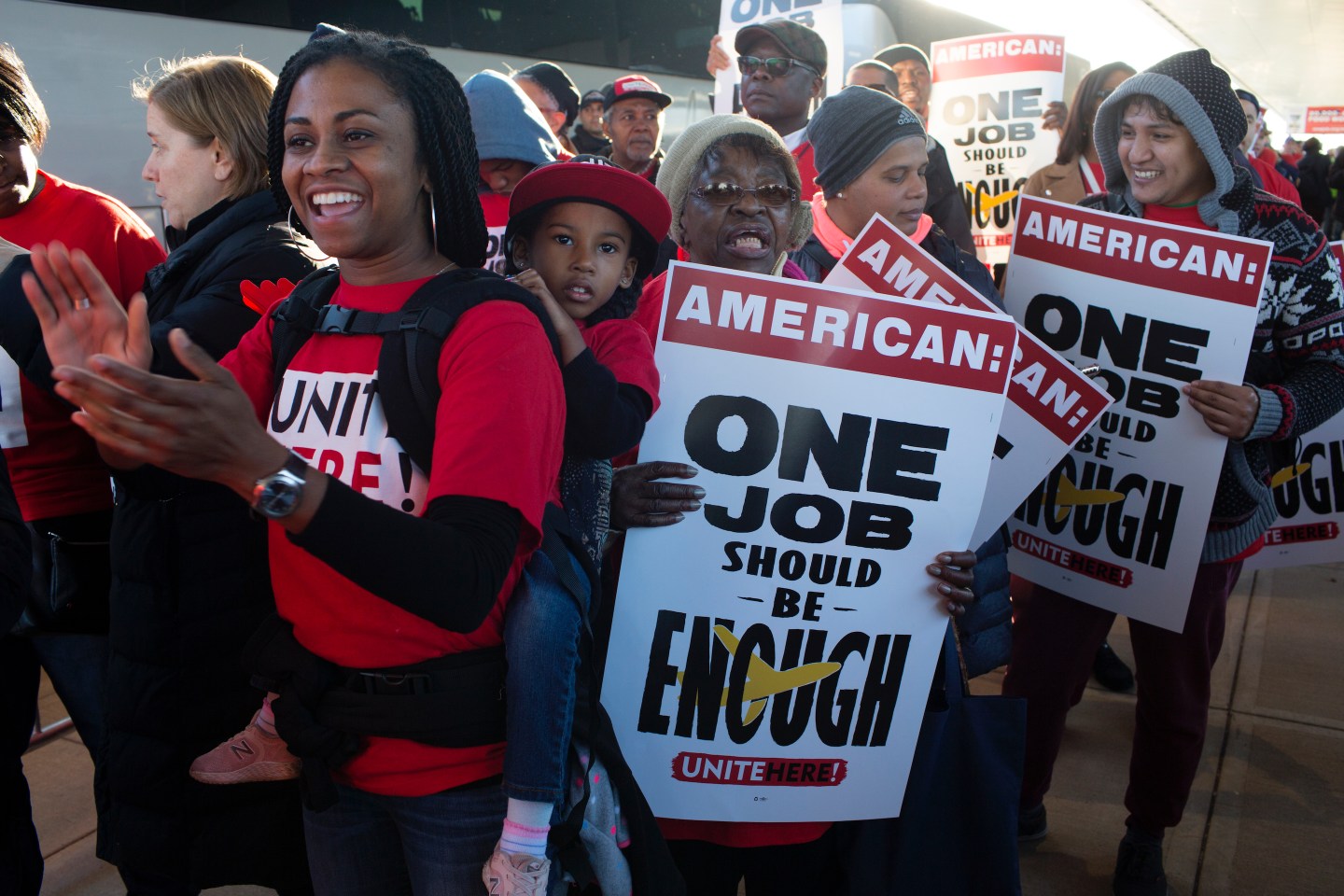 QUEENS, NEW YORK - NOVEMBER 26: The labor union UNITE HERE holds a rally for American Airlines food caterers to demand health care for the workers on November 26, 2019 at Terminal 8 at JFK Airport in the Queens borough of New York City. Caterers are subcontracted by the airline companies and have been denied basic wage increases and health care although American Airlines has made large profits over the past five years. (Photo by Andrew Lichtenstein/Corbis via Getty Images)
Andrew Lichtenstein/Corbis via Getty Images

The debate between Democratic presidential candidates on how to ensure economic opportunity for all Americans misses the essential points upon which most people would agree: Something is wrong with the U.S. economy and political system when 130 million Americans work hard but struggle to meet the cost of housing, food, childcare, transportation, health care, taxes, and other basic expenses. When it’s that hard to get by, it’s even harder to get ahead and be hopeful about your children’s future.

When my parents immigrated to the U.S. in the 1960s, they had high hopes and believed in the American dream: If you worked hard, your children would do better than you had. Today that optimism has faded, as the nature of opportunity has changed dramatically over the past four decades. For the first time since World War II, children in the U.S. have only a 50% chance of earning more than their parents, according to data from research group Opportunity Insights.

Why is this happening despite a booming stock market and lower unemployment? While some try to blame it all on slower GDP growth, globalization, and the technological revolution, the major culprit has actually been the redistribution of wealth from working families to corporate profits. Over the last 40 years, after-tax corporate profits as a share of the economy doubled from about 5% of GDP to 10% in 2019, according to The Atlantic. Meanwhile, the percentage of the economy represented by wages and salary actually declined from about 48% of GDP in 1980 to 43% of GDP in 2019. And that booming stock market is not a measure of success when those gains mostly benefit the wealthiest 10% of households, which, according to New York Times analysis, own 84% of all stocks—even after accounting for workers’ pensions and retirement plans. Favoring profits over people is the effect of glorifying an unfettered market and demonizing government protections.

The Rockefeller Foundation has always focused on unlocking human potential and meeting those moments not met by government or the private sector through an evidence and science-based approach. So while politicians argue about solutions not even fully formulated, we are using data analytics and technology to expand policies that everyone has already agreed upon and that we can prove work.

For working parents, especially single mothers, in the U.S., a major problem is childcare and the dilemma of missing work to care for a sick child, which threatens their jobs, and their ability to pay rent or buy food. As a starting point to addressing this—and similar hurdles for many others who struggle to make ends meet—pilot programs we funded show that expanding the Earned Income Tax Credit (EITC) to reach 4.6 million people at a state level, and doubling these tax credits at the federal level over the next five years, would provide more than $130 billion in tax relief and cash. For families who received EITC benefits, children do better in school, are more likely to go to college, earn more as adults, and are healthier too, according to a 2015 report from the Center on Budget and Policy Priorities. This isn’t a red or blue issue; the EITC has a history of bipartisan support.

A problem everyone—from California Governor Gavin Newsom to the Trump administration—can also agree on is the challenge of homelessness in the U.S., even for people with jobs. Another program with potential to keep people in their homes and raise their level of employment is the new tax incentive around Opportunity Zones. Across the 8,700 designated zones, there is a real opportunity to make an impact in underserved communities. In 2018, these communities had a median household income of $42,400, and the poverty rate is approximately 30%, according to an Economic Innovation Group report. And almost 6-out-of-10 people living in Opportunity Zones are either Black or Hispanic.

But this policy only works for those it was intended if leaders in both the private and public sectors help ensure that cities directly shape the capital investments the regulation benefits in ways that lift all boats and not just yachts. Washington, D.C. is doing that. At the corner of Good Hope Road and MLK Avenue in the southeast neighborhood of Anacostia, work is underway to bring office, retail, and other neighborhood amenities to an area where people are three times more likely to live in poverty compared to the rest of D.C.

Likewise, there are programs and benefits that can lift tens of millions of eligible working families out of poverty but they don’t know how to apply or are overwhelmed by the thicket of bureaucracy they have to hurdle. Whatever the cause, the effect is billions of dollars that go unused every year. While the problem is structural, there are programs that help address this gap. We’ve invested in Benefits Data Trust (BDT), one such program, which correlates household data from six partner states to screen for people who should have qualified for Medicaid or other benefits this year, but haven’t applied or enrolled. This means they may also qualify for help buying groceries, paying their home heating bills, or more than a dozen other benefits. Since 2005, BDT has helped around 930,000 people obtain $7 billion in assistance.

Americans have historically pulled together to help each other live their potential. Instead of divisive arguments on debate stages, let’s partner to expand policies we’ve already agreed can work and explore solutions that once again put people over profits.

Rajiv Shah is president of the Rockefeller Foundation.

—What companies can do to make work better for black employees
—How Democrats’ impeachment campaign helped Trump
—Fixing the corporate approach to addressing sexual harassment
—How Warren Buffett built Berkshire Hathaway
—WATCH: The double burdens that hold women back