No, A.I. isn’t deciding which movies to green-light 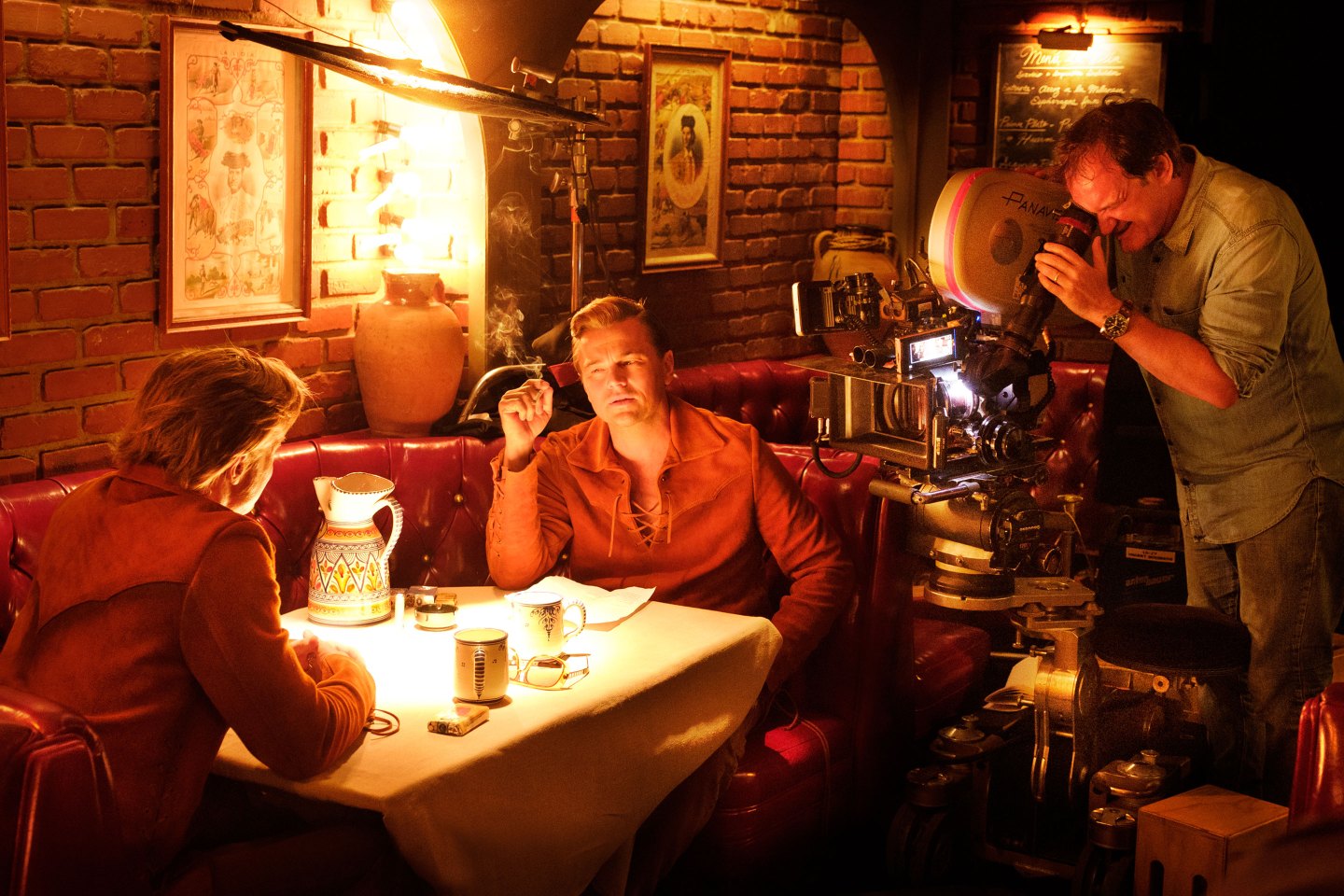 When the news broke last month that Warner Bros. was going to use a startup’s artificial intelligence program to “inform decision-making around content,” people understandably freaked out.

“Hollywood is replacing artists with AI. Its future is bleak,” read one headline. “Warner Bros. Wants to Use AI to Predict Movie Box Office, So Start the Terminator Jokes,” read another.

On Twitter, chess champion Garry Kasparov—who once lost a match to IBM’s Deep Blue computer—called it “the worst idea since they taught them to play chess!”

But people reading the headlines might have overreacted. Cinelytic, the company Warner enlisted, doesn’t have an A.I. movie exec reading through a slush pile of scripts and picking which ones will be the next Joker or Parasite. Instead, it’s a “project management system” that uses a machine-learning algorithm based on historical data and current industry trends to give an array of real-time revenue predictions. These are based on a number of variables, including the cast and the release plan (date, market, theaters versus streaming, etc.), and characteristics such as genre or whether the film is a sequel or adaptation.

With some accuracy, executives and financiers can see a film’s potential performance and make an informed decision on how to proceed. That could mean anything from rejecting a project immediately to betting big on it with more A-list actors or a larger theatrical release.

To give Fortune a better understanding of how Cinelytic works, CEO and cofounder Tobias Queisser gave us a demonstration of the product and answered our biggest questions about the service, including what it can and can’t do, how it can help independent films get made, and why it could increase diversity in Hollywood projects.

Cinelytic cofounder Tobias Queisser, has a background in both film production and the financial world.
Courtesy of Cinelytic

Cinelytic was founded in 2013 by Queisser—whose background is in both film production and the financial world—and Dev Sen, who spent 15 years at NASA developing risk-assessment software to analyze the designs of launch vehicles. They started the company after realizing that the movie industry hadn’t kept up with the technological advancements around data science and basic information-sharing that are used in other industries, and later brought in COO Christian Monti, a former studio executive who worked in international distribution at Paramount and Warner. Their clients include STX Entertainment, Sony, and, most recently, Warner’s international division.

“The film industry is already a very risky business. The reason is mostly that content has to be financed upfront,” Queisser says. “You have a script, you package it with an actor or director, and then you get to a stage where you have to finance it. You have to understand, is that package worth $10 million, $50 million, $100 million, more?”

And while moviemakers could view a project’s end data years down the line and wonder what went right or wrong with their investment, the Cinelytic team developed their system to figure out that value at the early stages, where most of the work is done by gut feeling and inefficient data collection across siloed departments. In Queisser’s eyes, the best part is that not only have they figured out how to put a value on a project upfront, they’ve also sped up the entire process.

“The most important benefit is that it streamlines workflow,” he says. “And processes that took two days, running a full-fledged analysis of your project, now takes 20 minutes.”

A sample Cinelytic dashboard for the hit “Once Upon a Time… In Hollywood.’
Courtesy of Cinelytic

What data does it use?

With numbers and information from Nielsen, Studio System by Gracenote, Variety Insight, and other sources, Cinelytic looks at box-office revenue and movies’ performance on physical releases, SVOD, VOD, television, and so on in global and specific markets—everything that would add up to the return on investment.

Movies are also analyzed based on a number of attributes, including key talent, genre, rating, sequel, adaptation/reboot, key themes, country of production, distributor, and the number of theaters. There is also a database of 550,000 actors, writers, directors, and producers, which tracks their performances in various films and markets, with added info on what their importance was to the project. For actors, that might involve noting whether they were first or second billing in an action flick or a lead voice role in an animated film, which helps with giving them economic talent scores. With a short list of potential actors, a producer could then enter in various combinations of casting configurations to see what might do best in, say, Europe and Asia versus North America.

To make things more accurate, Cinelytic only uses recent films’ performances for its predictions, rather than historical data. “The film industry changes very rapidly, so you really want to focus on the last three to five years. It doesn’t make sense to look at films from the ’70s and ’80s,” Queisser says. “Streaming didn’t exist 10 years ago. DVD was a huge revenue generator in 2002, 2004. It’s important to be as up to date as possible.”

Cinelytic projected 2019’s “Hellboy” would make $23.2 million at the domestic box office. The figure turned out to be close to the film’s actual $21.9 million figure.
Summit Entertainment—courtesy Everett Collection

Where does the human element come in?

When a user inputs all the attributes of a film, they’ll get predictions of domestic and international revenues and the algorithm’s confidence level in each projection, based on probability- and risk-weighted scenarios. The median confidence level, or “base case” as Queisser calls it, is the most likely outcome, the safest bet of the bunch. As an early example, Cinelytic used 2019’s Hellboy, with the median projection being a domestic box office of $23.2 million, which turned out to be close to the film’s actual $21.9 million figure.

This doesn’t mean the system predicted the movie would be of subpar quality or said it was foolish of Lionsgate to spend $50 million on it. “Because of the technology we use—machine learning, A.I., and pattern recognition—you cannot reverse engineer why it said that,” Queisser says. “Knowing the project, it basically said, ‘That kind of IP with that talent might not work as anticipated.’ That’s what our system does. We’re not in the business of forecasting hits or flops.”

He points out that Cinelytic came close to figuring out several other 2019 films’ domestic takes as well, including What Men Want ($56 million predicted versus $54.6 million actual), Rocketman ($91.7 million versus $96.4 million), and Once Upon a Time in…Hollywood ($126.1 million vs. $142.5 million). Those weren’t judgment calls on how good the movies would be, just a distillation and analysis of the data.

“We don’t believe that an algorithm can run a script and understand whether the story is good or will connect with humans,” Queisser says. “Right now, A.I. is about crunching numbers and seeing patterns, and we are about applying that technology in the most pragmatic way in the interface between creativity and data.”

For decision-makers in the industry, this means looking at the data and figuring out where to take risks. An executive can look at Cinelytic’s analysis and take a chance on one of the projections that the system has less confidence in, if they really believe in a movie.

“The producer or the executive can say, ‘This is one of the best scripts that I’ve read. I’ve worked with this producer, and the director is great. I am willing to green-light or work on this project if it breaks even in the [long-shot] range,’” says Queisser. “We give them the opportunity to overlay their creative understanding of the project.”

How can it help lead to more originality and diversity in film?

Queisser says a common misperception of his A.I.-based system is that it will predict that “safe” movies are the way to go instead of projects that are more original or have diverse actors and creators. In his view, Cinelytic does the opposite by incorporating success stories such as Moonlight, Crazy Rich Asians, and Parasite.

“Only 4% of independently produced films actually recoup their investment, and every step in the value chain is carried out by a different company,” he says. “These companies might have very different business models, and they’re often not very aligned, so this industry would actually be more sustainable due to the more objective use of information.”

As for diversity, he says Cinelytic’s use of only the past three to five years of revenue information means that it effectively erases long-held biases that films by women or with diverse casts won’t be successful. “Data doesn’t discriminate,” he says. “The recent data is very positive for diverse talent, especially in the last three years. We’re able to show that these projects actually will work.”

So how does the system account for surprise hits and flops?

In short, it doesn’t. But an executive could use the real-time data to adjust their financial expectations and release strategy based on, say, early audience reactions or reports from the set of how well a production is going. Queisser says Cinelytic ran predictions on Joker before it was finished, and the most likely outcome was that the film would debut in 3,600 theaters and make $130 million. But once early buzz from the Toronto International Film Festival came in, and critics were bullish on the film, Cinelytic reran the film’s numbers with a release of 4,300 theaters, bumping it up to $270 million.

Hypothetically, knowing a windfall like that was coming could lead a studio to green-light another film that’s a riskier investment. On the flip side, if the film had Dolittle-like production problems and negative buzz, the studio could have slashed its promotional budget to mitigate losses and proceeded with some safer projects, like a gambler taking a few dollars off the table after being dealt a bad hand.

“You want to have a pragmatic and methodical approach. You want to make sure the base-case scenario is that you get your money back or make a small profit,” Queisser says. “You hope for an outlier—that’s the optimal scenario.”