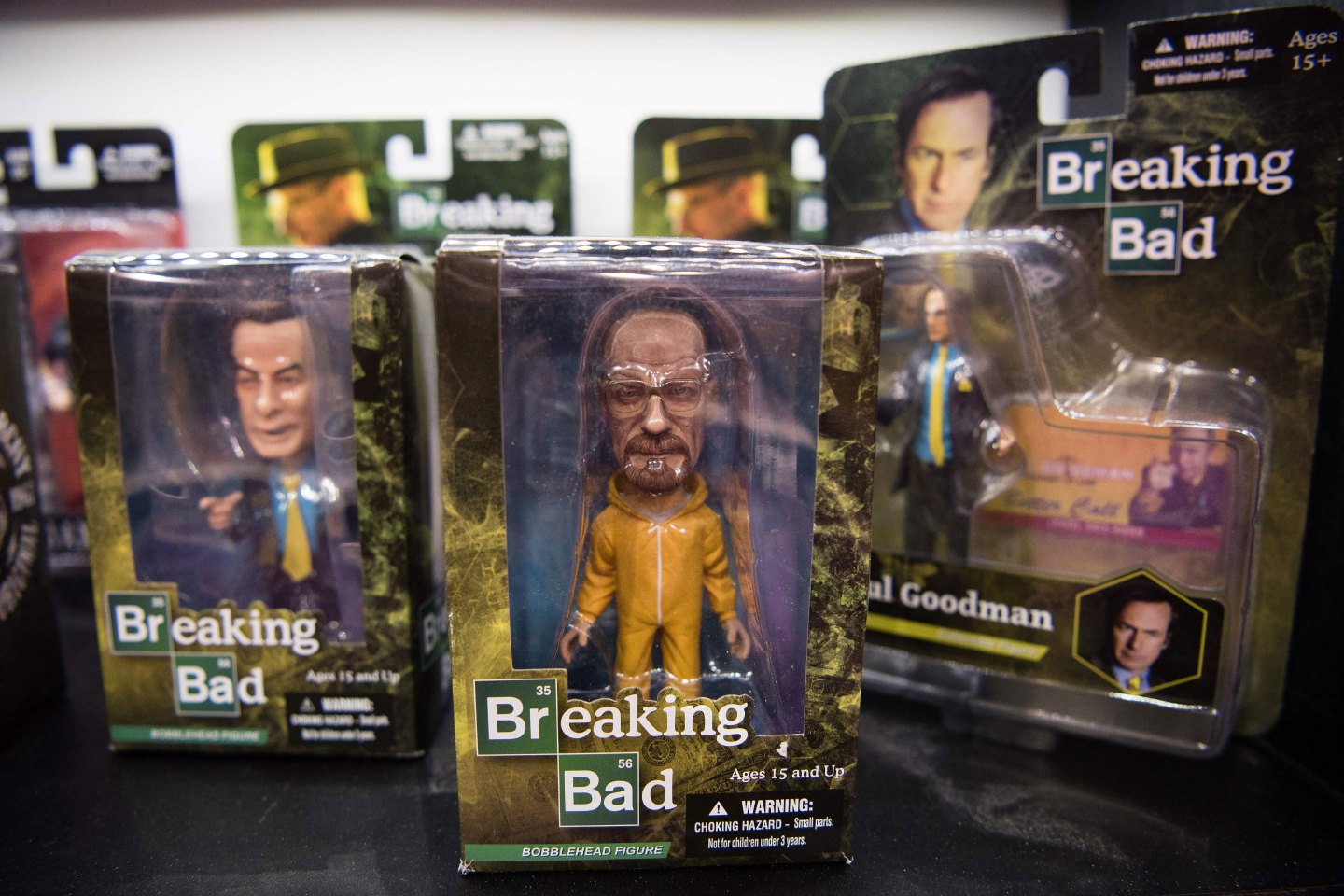 When Breaking Bad, a series about a cancer-stricken chemistry teacher who turns to the meth business, debuted on AMC in 2008, it had no merchandise—not even a T-shirt. Twelve years later, creator Vince Gilligan finds himself gazing at a wall of Funko dolls in his Los Angeles office—not only of protagonists Walter White (Bryan Cranston) and Jesse Pinkman (Aaron Paul), but a goateed Gilligan himself.

“The idea of creating something that generated action figures delighted me to no end,” Gilligan tells Fortune via phone. “I probably bought most of the 100 or 200 of those that they made.” He’s tickled by them, he says, more than any other Bad products over the years—hazmat suits, chefs’ aprons, “blue sky” rock candy—all references to the Schedule II controlled substance made and sold by Walter and Jesse.

During its five-season run from 2008 to 2013, Breaking Bad resisted declining viewership and almost cancellation to become one of the most wildly popular shows on TV. Six years after its finale, bolstered by offbeat brand partnerships, restaurant pop-ups, a mezcal line, and a Netflix film sequel, the neo-Western set in Albuquerque is verging on the empire business.

The “Breaking Bad” hazmat suit costume on the racks at the Halloween Club store in Montebello, Calif., on Oct. 16, 2014.
FREDERIC J. BROWN—AFP via Getty Images)

Gilligan and partner Peter Gould seem poised to ride this train as far as it will go. Although Breaking Bad might be history, prequel Better Call Saul, centered on Bob Odenkirk’s Saul Goodman (a.k.a. Jimmy McGill), hit the ground running from a critical and marketing standpoint. The show returns for its fifth season via a two-night premiere Sunday and Monday.

“Our fans appreciate the cleverness of [Better Call Saul],” Linda Schupack, the president of marketing at AMC, tells Fortune. “They expect that from our marketing.”

Part of this, Schupack says, is achieved with videos that “break the fourth wall.”

In 2017, Better Call Saul brought back the character of Gustavo Fring (Giancarlo Esposito), a Chilean-born meth kingpin who owns fried-chicken chain Los Pollos Hermanos. To tease his return in season three, AMC ran a late-night ad for the restaurant on local Albuquerque stations starring Esposito in character—and with no mention of the show.

“Fans loved it,” Schupack says, citing “all sorts of discussion on our social platforms.”

To tease the season five release date, Cinnabon’s Facebook page ran “archival footage” of an Omaha location opening. Part of Better Call Saul is a flash-forward in which Jimmy/Saul, the target of an international manhunt, relocates to Omaha and works at a Cinnabon under the name Gene Takavic. The character appears partly obscured in the video, which, AMC says successfully engaged Saul fans.

“Fans knew it was Gene from the show, and they solved the teaser to reveal the date,” Schupack says.

Odenkirk in character at a Cinnabon on “Better Call Saul” from the second season premiere.
Ursula Coyote—Sony Pictures Television/ AMC

As far as the brand partnership with Cinnabon? “They got it. They’re hip. They turned out to be great partners,” Gilligan says. “They did not mind having, in a fictional sense, this dirty lawyer on the run from the law, working at one of their bakeries.”

“It turned out to pay dividends, hopefully, for both sides of the equation,” he says.

AMC also leverages throwaway Saul moments for YouTube content. A scene in which criminal fixer Mike Ehrmantraut (Jonathan Banks) brings a cheese sandwich to a drug deal in lieu of a gun led to “How to Make a Pimento Cheese Sandwich.” Other “training videos” include Gus in “How to Iron a Shirt,” lawyer and Jimmy’s girlfriend Kim Wexler (Rhea Seehorn) in “How to Negotiate,” and cartel criminal Lalo Salamanca (Tony Dalton) in “How to Make a Taco.”

“Tapping into [the show’s] unique voice is something our fans expect,” Schupack says.

And, she says, AMC has completed demolition of the fourth wall with a series of Los Pollos Hermanos stands in major cities.

Three years ago, to herald the return of Gus, temporary Los Pollos Hermanos locations were erected on 6th Street in Los Angeles, at the South by Southwest festival in Austin, and in a parking lot in Manhattan’s Financial District. (The Thirsty Bird chicken restaurant in Sydney was also transformed into a pop-up Los Pollos.)

“We furthered the blur between the fictional Los Pollos Hermanos and an actual restaurant,” Schupack says. (The pop-ups didn’t offer fried chicken, selling small orders of curly fries instead.)

For season five, instead of reviving the stand-alone restaurants, Sony Pictures Consumer Products teamed up with Uber Eats and kitchen delivery network Family Style Inc. for a “virtual launch,” offering Pollo Tenders, Fring Fries, and Slaw Goodman for delivery. This, it seems, was a cost-cutting measure from the previous pop-ups.

“Little did I realize this could be accomplished without building an actual brick-and-mortar restaurant,” Gilligan told The Hollywood Reporter in 2019.

To wash it down, visitors could sip Dos Hombres, a mezcal developed by Cranston and Paul.

In 2019, the actors each posted the same photo of two donkeys with the caption: “Soon.” They followed it up with a photo of themselves wading through a river: “Even sooner.”

During an appearance on The One Show, Anna Gunn, who played Walter’s wife, Skyler, spilled the beans: “I believe it is a nod to a mezcal tequila that they are bringing out, the two of them, called Dos Hombres.”

Cranston, Gilligan, and Paul behind the scenes on the set of “Breaking Bad” film “El Camino.”
Ben Rothstein—Vinton Productions

Naturally, fans thirsting for a rumored Breaking Bad film—or any reunion between Cranston and Paul on-screen—felt somewhat let down by the news. But, the pair insisted, it was a passion project.

“We couldn’t get the idea out of our heads,” they said in a joint statement, calling themselves “two guys on a quest” for the perfect Mexican liquor.

Still, the pair were burying the lede: They had a film sequel in the can. A month after the mezcal news, El Camino: A Breaking Bad Movie was announced for an Oct. 2019 release.

Gilligan owes part of Breaking Bad’s longevity to Netflix. “We were in a bit of trouble viewership-wise after about a year or two on AMC,” he says. “AMC was doing their very best to get the viewership up, but that world was in the midst of a change it didn’t realize it was undergoing.”

That change was the emergence of streaming. “Netflix saved us in that it allowed folks to catch up on Breaking Bad and binge-watch it,” he says.

Paul on set as Jesse Pinkman in a scene from Netflix’s “El Camino.”
Ben Rothstein—Vinton Productions

“Netflix seemed to be the natural home for it given what Netflix had done for the original series,” Jeff Frost, president of production company Sony Pictures Television, tells Fortune. “They exposed it to this wide range of demographics and made it the cultural phenomenon that it is.”

In the Breaking Bad series finale, “Felina,” Walter heroically opens fire on a neo-Nazi compound with a machine gun in his trunk, enabling a once-enslaved Jesse to speed off into the desert. Gilligan wanted to make a stand-alone film to tell the rest of Jesse’s story, but AMC passed since it doesn’t make one-off films.

“With that in mind, I always want to ‘dance with the girl that brung ya,’ so to speak,” Gilligan says.

No matter where the Breaking Bad property grows both in storytelling and in marketing scale, Gilligan tries to never “put the cart before the horse.”

“Our first thought, always, is to never do anything that would damage the Breaking Bad or the Better Call Saul brand,” he says. “But having said that, we’re always looking for fun and offbeat ways to give our fans the opportunity to own a little piece of the show.”

At times, Breaking Bad merchandise has earned less-than-kind reviews. A 2014 Vice article insisted that it “[cheapens] the show’s legacy,” saying that the T-shirts, candy, and dolls “encourage an afterlife of costume parties and dorm posters.”

But products aside, Breaking Bad–related shows and movies are where its legacy can be truly judged; critics say that Gilligan and Gould have stayed one step ahead of fans’ expectations.

“I was nervous about El Camino in concept but was reassured in its execution,” Donna Bowman, an A.V. Club writer who recapped Breaking Bad and now Better Call Saul, tells Fortune. “And a lot of people thought Better Call Saul was a terrible idea, giving a backstory to a character who didn’t need one, but they were wrong.”

“In some ways, Better Call Saul is better,” Alexander Zalben, the managing editor of Decider, tells Fortune. “Part of that is because they were still finding their way in the early episodes of Breaking Bad, [whereas] Better Call Saul knew itself immediately.”

With El Camino in the rearview mirror, Sony has “a lot of things in the works” for the Breaking Bad property, Frost says. “We’re going to make sure we give the audiences what they want.”

And as Gilligan gazes at an office wall of Breaking Bad knickknacks, the runoff of a show that seems to face limitless expansion into the 2020s, he admits he and Sony are basically winging it in the marketplace and that there was never a “master plan.”

“I’d love to pitch to Fortune magazine my great business acumen and my chess-master-like vision for the branding and the marketing of the show,” he says with a laugh. “We just kind of have fun with it and take it day by day, product by product, and company by company.”

—How ’90s cult rock band Guided by Voices flourishes despite industry odds
—With Sonic the Hedgehog big at box office, Paramount catches “lightning in a bottle”
—Rob McElhenney on exploring misogyny and censorship in gaming with Mythic Quest: Raven’s Banquet
—Portrait of a Lady on Fire filmmaker Céline Sciamma on the female gaze and her ‘architecture of desires’
—Contagion writer, scientific adviser reflect on film’s newfound relevance amid coronavirus crisis
Follow Fortune on Flipboard to stay up-to-date on the latest news and analysis.