If we want to keep eating chocolate, we have to end deforestation 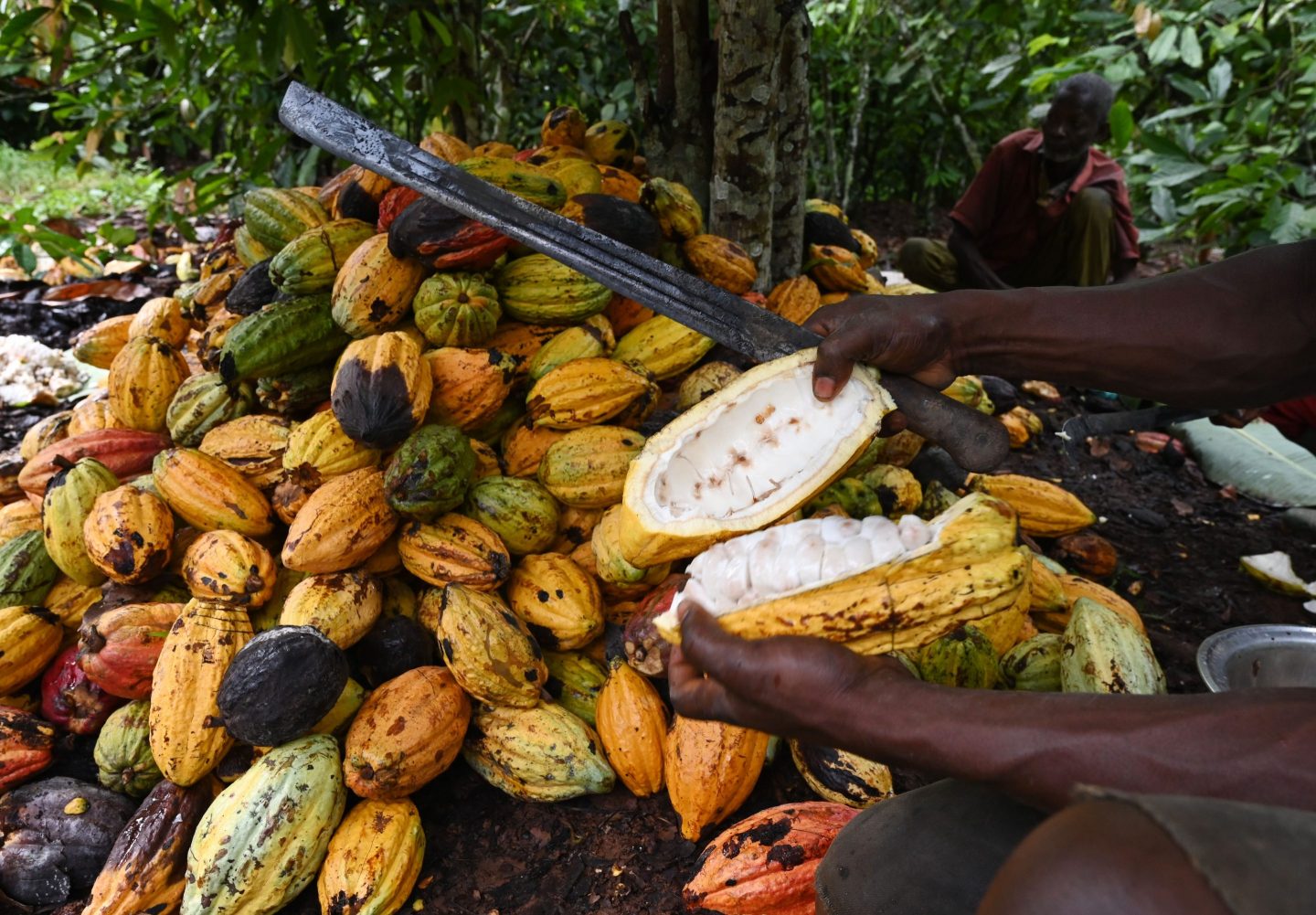 An Ivorian cocoa farmer breaks cocoa pods with a hooked knifr in a cocoa plantation near Sinfra in the Central region in Ivory Coast on October 12, 2019. - The purchase price of cocoa to the farmers of Ivory Coast, the world's largest producer, was set at 825 CFA francs (1.25 euros) per kilogram, at the opening on Tuesday of the cocoa year 2019-2020, ie up 10%, announced the Coffee Cocoa Council (CCC). (Photo by ISSOUF SANOGO / AFP) (Photo by ISSOUF SANOGO/AFP via Getty Images)
Issouf Sanogo—AFP/Getty Images

More than two-thirds of people across the globe say they can’t imagine a world without chocolate, according to Mondelez International’s internal research. Neither can we. But to guarantee the future of cocoa, and therefore chocolate, we need to tackle deforestation, as well as the poverty and practices that make it worse.

Given the various obstacles to confronting climate change, it might seem strange to focus on chocolate. But deforestation is a huge problem in cocoa farming. As demand for chocolate increases, cocoa growers are accelerating production. Without the right incentives, some farmers may clear forested land to plant more cocoa trees. Taking proactive steps on deforestation is the single biggest contribution companies like ours can make to helping our younger generations have a better world to grow old in.

We’ve tried to tackle deforestation before with certification schemes, where food companies pay a premium for ingredients grown under independently verified environmental and social criteria. But these schemes haven’t always trickled down to drive real change on the ground. They are hard to scale up to cover the volumes required, meaning the deforestation problem remains untouched in the majority of the supply chain. And the schemes often lack a holistic approach, incentivizing improvements in one area like farming, but doing little to tackle broader issues within a community.

If cocoa suppliers and chocolate manufacturers are going to live up to our commitment to the Paris Agreement, to cap global temperature increases at 2 degrees Celsius, or even better 1.5 degrees, we need to move fast and work together. If not, the climate crisis we face today will become devastating.

That’s why Mondelez International, together with other cocoa companies and in collaboration with governments, co-created the Cocoa & Forests Initiative (CFI).

Earlier this year, companies representing around 85% of the global cocoa market published plans under the CFI that spell out how we’re going to change this trajectory. Each company will follow a common framework focused on prevention, farmer income, and community involvement.

First of all, we need to protect trees by preventing encroachment, where forests are cut down to plant cocoa-yielding trees. To do so, we need a clear picture of where cocoa farms are. The challenge is that cocoa farms are generally small and hard to map. An average cocoa farm in West Africa ranges in size from two to five hectares. But thanks to modern technology, there are solutions.

We have worked with Global Forest Watch to plot farms on satellite maps and analyze how they interact with forested and protected land. About 63%, or 93,000, of the farms supplying the Mondelez International Cocoa Life program in Ivory Coast, Ghana, and Indonesia have been mapped already and we know they are not in priority-protected areas. And we’ve put the map online so everyone can see it. If we do identify a problem, we ask our suppliers to flag this to the local farmers’ organization so it can take action. In time we will report cases to governments too.

A key driver of deforestation is poverty. Cocoa is grown almost entirely by smallholder farmers. We can help make farms more productive with yield-improving agricultural practices, such as planting shade trees around the cocoa-growing trees to create better growing conditions for cocoa. And we can encourage farmers to diversify their income by investing in other areas, either for sale or consumption, such as keeping livestock or farming fish.

Finally, we know that deforestation can’t be addressed through cocoa farmers alone; the whole community needs to be involved. Families and neighbors can work together on community action plans, investments in infrastructure, and pooling resources to help create a more resilient community. Village Savings and Loans Associations have also been effective means of encouraging savings and protecting families from the volatilities of cocoa farming.

As an industry, we’re doing a lot. But there is a saying in Ghana: If you want to go fast, go alone. If you want to go far, go together. All stakeholders across the value chain must come together to make it work—chocolate manufacturers, suppliers, retailers, farmers, governments, and civil society.

In addition to the CFI, the Consumer Goods Forum is playing a leadership role in tackling deforestation by bringing together a coalition of companies—in the cocoa sector and others—to drive change at scale, working in partnership with suppliers and producer governments to optimize land usage. Further work is being driven by the Tropical Forest Alliance, whose mission is to use the power of collective action and responsibility to create a business culture that takes tangible actions to preserve forests. The alliance works to reduce and halt tropical deforestation driven by commodity supply chains. Mondelez International is a member of both of these organizations.

We encourage everyone who interacts with cocoa farming to work together to drive transparency and find solutions to address the environmental and social issues that cocoa faces. Our world, and the future of chocolate for cocoa farmers and chocolate lovers alike, depends on it.

—Robot surgery could be the future of health care in remote areas
—Mayors: Why gutting minor league baseball would be disastrous for our cities
—Why insurers should cover mental health care to lower costs
—Betsy DeVos is letting for-profit colleges trap students in debt they can never repay
—WATCH: The double burdens that hold women back