How to spend a winter weekend in Napa 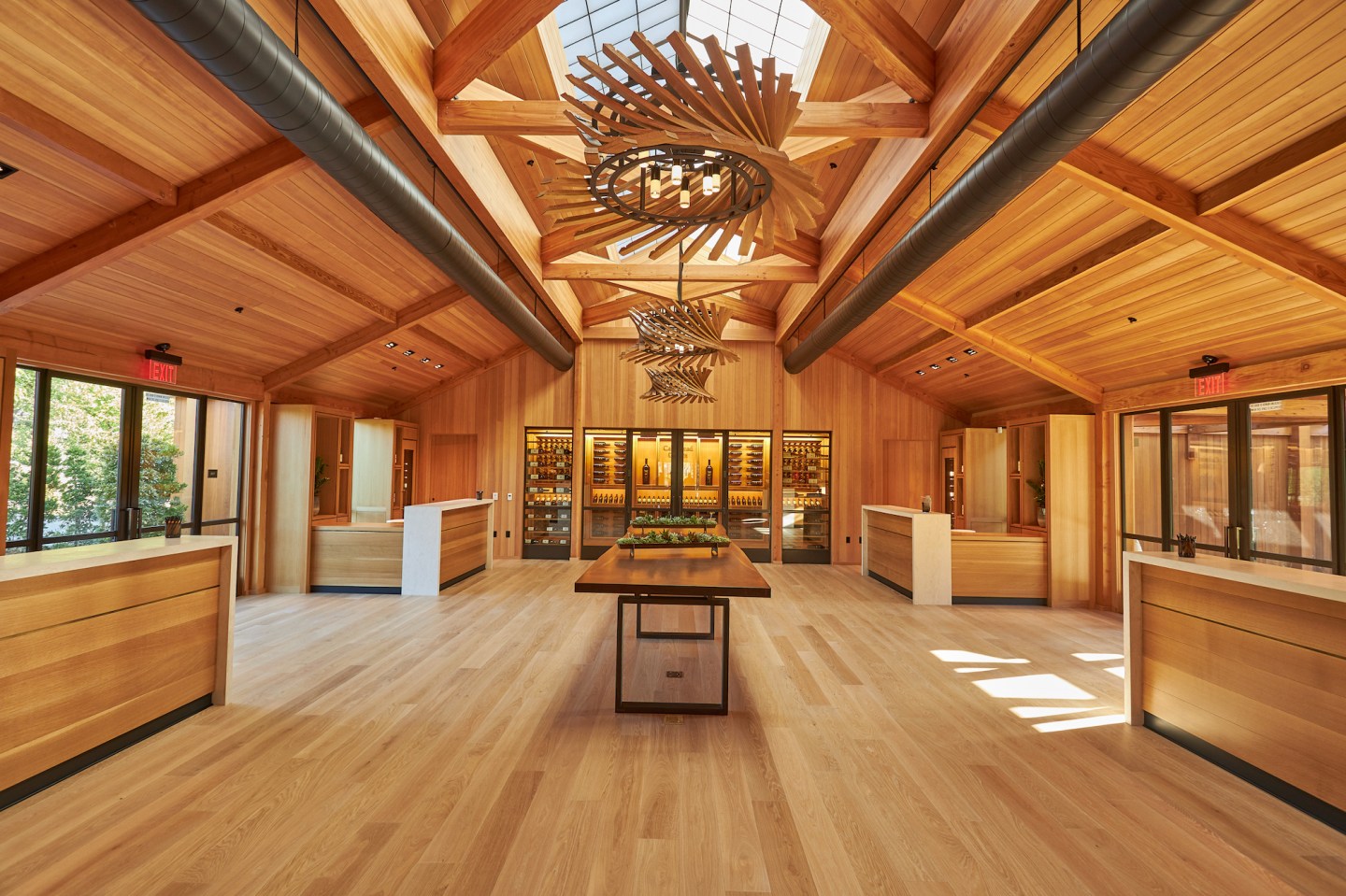 But that isn’t always the case, and it certainly isn’t in Northern California’s Napa Valley right now. While last winter (from 2018 into 2019) saw a record rainfall, the region is currently tracking well under its rainfall targets for the season. For the time being, visitors can expect daytime highs around 60 degrees Fahrenheit, meaning you can easily blend in with the winemakers (and tech company offsite crowds) with a puffy vest and a light jacket.

And yes, rates are definitely going to be cheaper across the board, from hotel stays to ride-sharing fares between wineries with far fewer visitors from January to April.

But a good deal isn’t just about saving money. It’s also about maximizing access and relaxation.

“I think the secret is there is no bad time to visit wine country,” says Katie Griesbeck, national sales and marketing director for Cakebread Cellars. “But when it’s quiet, the winter is the best time of all because you have access to your favorite wineries, favorite hotels, favorite restaurants, and beautiful scenery.”

Here’s a guide to making the most of a calmer weekend (or even midweek) trip to the Napa Valley—with a focus on downtown Napa to maximize your time—as these sites will definitely see an uptick in visitors (and rates, where applicable) this summer.

Cakebread Cellars has built four new tasting rooms with windows peering into the fermentation hall, looking out onto a baker’s dozen of newly custom-made egg-shaped fermentation tanks made of concrete.
Rocco Ceselin

Cakebread Cellars: Whether you’re a first-time visitor or a oenophile, deciding which wineries to visit can be a daunting task. One that should be at the top of your to-do list is Cakebread Cellars, a family-owned producer famous for its Chardonnay (but do not miss the Pinot Noirs) based on Highway 29. The 22-acre estate, which has been in the family for more than 45 years (and yes, Cakebread is the family name), recently underwent a massive multiyear renovation, just completed in October 2019 with a remodel of the original 10,000-foot space followed by a 36,000-foot addition—all intended to elevate the wine tasting experience for individuals and groups alike as well as immersing guests with up-close views of the entire process.

Developed by BCV Architecture + Interiors, the winery has several distinct but meticulously designed tasting rooms—some overlooking the vineyards but also a handful inside the winery with views of the fermentation tanks. It’s not unlike sitting in a restaurant where you can see the kitchen, with a bit of people watching mixed in, as visitors can get front row seats to production. And while many of the interior design details were crafted with the intention of being so subtle they go unnoticed…you really should take note—starting with the exterior of the new building addition, a structure made from reclaimed redwood wine-tank staves. Not only do parcels of decommissioned tanks like that not come around often, but they also smelled like wine—Cabernet Sauvignon, to be exact. Being able to repurpose them was a way of paying tribute to the heritage of the Valley, according to Asa Prentice, an associate and senior product manager at BCV Architecture who worked on the project, which took several years.

“People are realizing that there is a variety of visitors coming to the Valley. It’s not just wine that attracts them to Napa, but the experiences they’re seeking,” Griesbeck says, noting that the region has been seeing an influx of corporate visitors as well as a greater number of families. “Our goal is to have something for everyone. If you’re a foodie, or you want to geek out on older vintages, or you just want an introduction to the winery and the portfolio, we will make that happen. The idea is to tailor it to the experience you want.” By appointment only.

Gabrielle Collection taste+: While it was always a popular combination, Olivia Pope brought the pairing of wine and popcorn to mainstream pop culture. And though the terminology “food and wine tasting experience” might sound cliché, that self-description is valid at this tasting room for O’Connell Family Wines. Starting at $35 per person, guests can go through a wine and popcorn (and chocolate) flight, pairing three wines with three seasoned popcorns. Toppings include olive oil (made in-house) infused with estate herb sea salt and pepper (goes with a Sauvignon Blanc), a BBQ rub (goes well with a Syrah blend), and an orange chocolate dusted popcorn (with Cabernet Sauvignon). And O’Connell Family Wines feature brands by each family member. The family’s wines are available almost exclusively at the tasting room and online.

Cadet Wine & Beer Bar: It might be a violation to publicly reveal a place where the locals go, but so be it. And similar to Cakebread, the watering hole in downtown Napa—a hidden gem tucked away just off First Street—just went through a remodel of its own. The bar frequently runs specials during the week, with discounts on everything from wine vintages to oysters. And the bar will sometimes pull in local winemakers to do the pours themselves. You might also spot a vinyl record player responsible for the background tunes, setting the tone for a chill vibe, and don’t be surprised if you recognize some familiar faces after a few visits.

Oxbow Public Market: The beating heart of Napa—at least downtown Napa—is located in the Oxbow District. Originally a 1930s tire store and garage, the facility underwent a massive remodeling—akin to the San Francisco Ferry Building just an hour south—opening in December 2007 as an open-span public market along the Napa River. And given its popularity with locals and visitors alike, the Public Market surely contributed to the wave of high-end food halls across the country.

Open seven days a week (closed only on Thanksgiving and Christmas), the space is a feast for both the eyes and the stomach. With a focus on supporting local artisans and sustainable produce, the market hosts two butcher shops, a fish market, a local organic produce store, an artisan cheese and wine shop, a spice market, a chocolate shop, an olive oil purveyor, multiple bakeries, a coffee shop, a distillery, a diverse cross section of restaurants, and an oyster bar. (Choices you won’t regret: The Model Bakery for English muffins and Ritual Coffee Roasters for a much-needed hit of espresso.) The place can get packed easily on summer weekends, but you’re much more likely to get a word (or full conversation) in with local purveyors as well as a better chance at grabbing a prime spot on the scenic outdoor deck.

Gran Eléctrica: If you’re tired of wine, treat yourself to some tequila and mezcal. With outposts on each coast (one in Brooklyn and one in downtown Napa), Gran Eléctrica has a market-driven Mexican menu inspired by traditional Mexican street fare and making use of authentic cooking techniques, seen with fresh hand-pressed tortillas crafted with heirloom corn, house-made crema and queso fresco, and spicy chorizo made on-site. While the exterior of the restaurant boasts a familiar industrial-chic aesthetic that’s been taking over new architecture in the Valley, the dining room sports wallpaper inspired by classic Day of the Dead themes with a quirky twist featuring Napa Valley landmarks. And that isn’t the only Napa influence at this location: Chef Ignacio Beltran hails from Mexico, and he has cooked at some of the most lauded spots in the Napa Valley, including Ad Hoc, Meadowood, and Terra.

Miminashi: Regardless of the temperature, ice cream is anytime-of-year food—no matter what anyone says. Now you could go into the shop—which is intricately designed, starting with the entrance paved with hundreds of wood carvings representing Mount Fuji, leading into an interior sporting poplar wood ceilings replicating interlocking pagodas. From there you can expect a full wine list and Japanese-style izakaya menus. But you could also relive your youth and head to the soft serve window (open until 10 p.m.) for a rotating set of delightful flavors, ranging from strawberry and piña colada to matcha and chai-espresso.

Archer Hotel: Upon picking me up from my hotel, an Uber driver joked that if you asked him two years ago for an idea for a billion-dollar business, he would have replied, “Build a hotel in Napa.” Sometimes you should really jump on your big ideas. Downtown Napa has seen a mini luxury hotel boom as of late, anchored by the Archer Hotel. An imposing structure—at least compared with the one- to two-story buildings surrounding it—the Archer hosts 183 luxe guest rooms, including 39 balcony-clad suites, with complimentary Wi-Fi, a Nespresso coffee machine, a wine refrigerator, Frette bathrobes, Malin+Goetz toiletries, and Charlie Palmer Steak in-room dining. (Of course, you could always pop down to the Charlie Palmer Steak restaurant for breakfast, lunch, dinner, or happy hour.) But the more breathtaking experience, especially at golden hour, would be hopping in the elevator to the Sky & Vine Rooftop Bar, with comfy outdoor seating surrounding crackling stone fire pits, keeping guests warm and entertained year-round.

The Andaz Napa was ranked on Condé Nast Traveler’s list of the top 25 hotels in Northern California.
Courtesy of Andaz Napa

Andaz Napa: Hyatt’s line of boutique hotels has become synonymous with luxury stays in top-tier destinations, from Manhattan to Shanghai. Napa is no different, with 141 rooms, including 91 suites, as well as a select number of loft rooms featuring private balconies and glass fireplaces. And while you’re likely to be spending a good deal of your time away from the hotel and in the Valley, you wouldn’t want to miss out on the experience of fully enjoying these rooms, featuring marble bathrooms with soaking tubs and in-room spa services.

—Inside New York City’s Chinese restaurant crisis
—Couples are including cannabis at their weddings. How you can, too
—These tailors show that custom suiting is no longer just for men
—The food scene in South Philly is more than just cheesesteaks
—The best travel destinations for every season of 2020