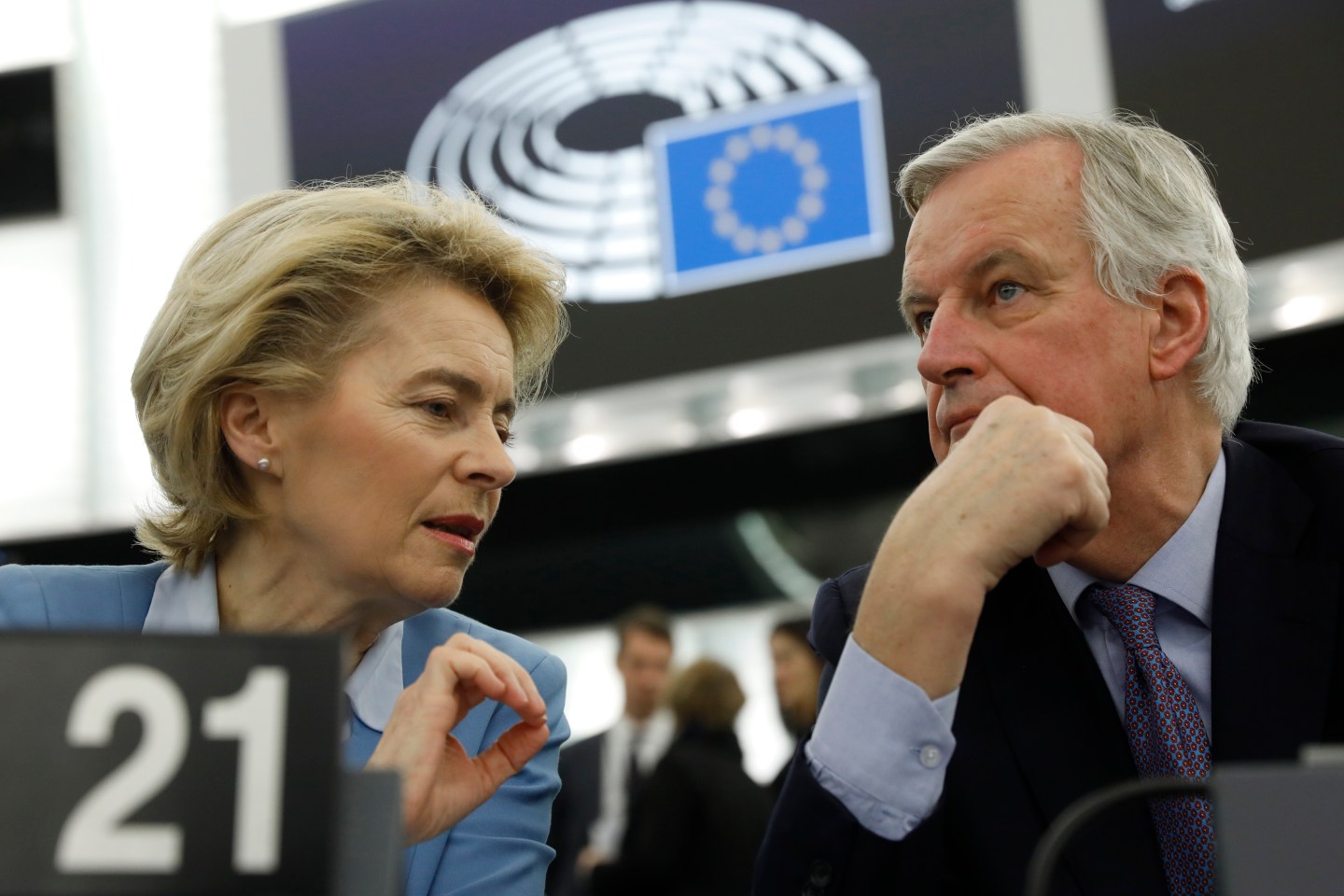 European Commission President Ursula von der Leyen, left, talks to to European Union chief Brexit negotiator Michel Barnier during a debate on a proposed mandate for negotiations for a new partnership between the UK and Northern Ireland at the European Parliament in Strasbourg, eastern France on Feb. 11, 2020. Jean-Francois Badias—AP Photo
Jean-Francois Badias—AP Photo

Von der Leyen said she was surprised Johnson even raised the possibility that Britain would accept Australia-style trade arrangements, including quotas and tariffs, if his government can’t reach a comprehensive agreement with the EU. She criticized Johnson’s plan Tuesday in front of a small audience at the European Parliament in Strasbourg, France.

“Australia is a strong and like-minded partner, but the European Union does not have a trade agreement with Australia,” said von der Leyen, the head of the bloc’s powerful executive arm. “We are currently trading on World Trade Organization terms.”

Von der Leyen added: “If this is the British choice, we are fine with that. We can decide to settle for less, but I personally believe we should be more ambitious.”

Britain left the EU on Jan. 31 — the first nation ever to do so — but it is continuing to follow EU regulations at least until the end of the year. During the transition period, the British government and EU leaders will try to negotiate a free trade deal and agreements covering other areas like security cooperation.

Britain wants the trade agreement to cover goods and services and exclude almost all tariffs. However, Johnson has been adamant that the U.K. won’t keep following all of the EU’s regulations. To strike deals with other countries, Johnson wants the flexibility to subscribe to varying standards for areas such as competition, state aid or even the environment.

Some British businesses have expressed alarm that the government is watering down its commitment to keeping trade with the EU as frictionless as possible.

Andrew Opie of the British Retail Consortium said that unless the government acted fast to set up border infrastructure, U.K. customers could see shortages of fresh fruit and vegetables.

“It is not enough to announce checks will take place, we must see plans now as to how this will be possible in practice, or it will be consumers who suffer on January 1,” he said.

Von der Leyen insisted that the 27-nation EU is offering Britain “something we have never offered before to anybody else” on the condition that the former EU nation guarantees fair competition and protections for workers and the environment.

Michel Barnier, the EU’s chief chief negotiator, warned that business between the U.K. and the EU won’t be status quo after the transition period ends if the parties have not reached a trade accord; tariffs and quotas would be immediately implemented on all British products.

“The opening of our markets, access to data and equivalence for financial services will be proportional to the commitments made to respect a true level playing field, regulatory coherence, protection of citizens and financial stability,” Barnier said.

He added that Britain should not be under the illusion the City of London’s financial services will have preferential access.

“Brexit can’t be business as usual, there will be changes in every domain,” Barnier said. “This negotiation will be difficult, very difficult. I recommend that we stay ready for every option, including the one without a basic deal before Dec. 31.”

The British government has warned U.K. businesses to prepare for customs declarations and checks on goods coming from the EU next year.

“The U.K, will be outside the single market and outside the customs union, so we will have to be ready for the customs procedures and regulatory checks that will inevitably follow,” Michael Gove, the Cabinet minister in charge of Brexit preparations, said Monday.

On Monday, the leader of Scotland’s government warned that Britain would pay a “heavy cost” if it abandons EU rules and standards. Scottish First Minister Nicola Sturgeon also reiterated her desire for a referendum to win Scotland’s independence from the U.K. and the possibility to join the EU as a member country.

“As the EU continually makes clear, the more we diverge from EU standards, the less access we will have to the single market,” she said. “The right to diverge will come at a cost, a very heavy cost.”