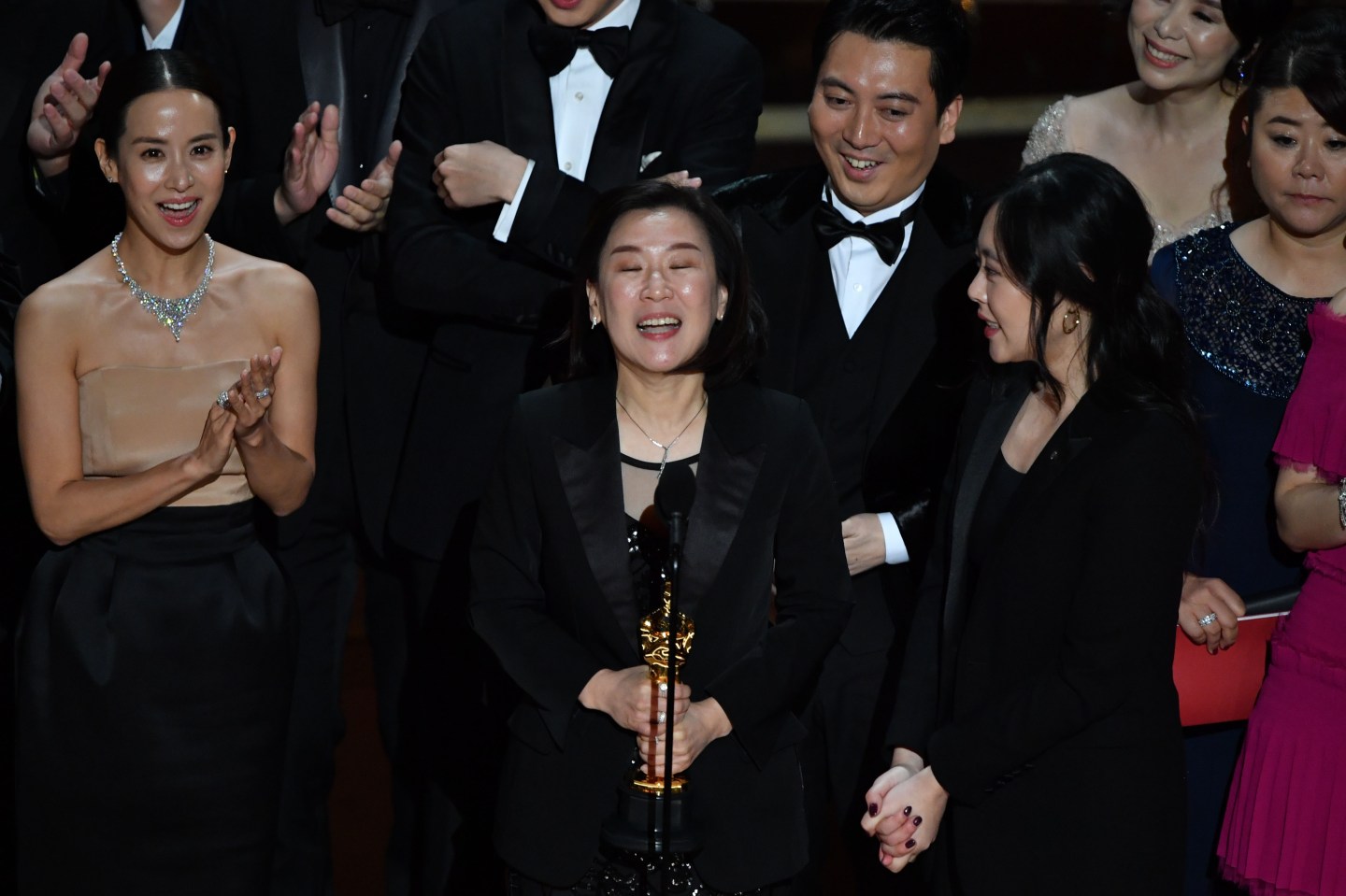 "Parasite" producer Kwak Sin-ae (C) accepts the award for Best Picture for "Parasite" during the 92nd Oscars at the Dolby Theatre in Hollywood, California on February 9, 2020.
Mark Ralston—AFP/Getty Images

– And the Oscar goes to… At the Academy Awards last night, women were honored for some important achievements—from the female directors behind four of the five best documentary nominees to Joker composer Hildur Guðnadóttir, the first woman to win for best original score since the current category was created in 2000.

Laura Dern took home her first statue for best supporting actress. Renée Zellweger won best actress. The filmmakers behind the animated short Hair Love, including Karen Rupert Toliver, used their win to advocate for the CROWN Act, which would ban hair discrimination nationwide. And the best documentary award went to American Factory, the Obama-backed project co-directed by Julia Reichert, who has spoken about the meaning of winning the honor while battling cancer.

What’s more, Eimear Noone was the first woman in the Oscars’ 92 years to conduct the ceremony’s orchestra.

But the tone of the evening was mixed. Before the ceremony even started on ABC, the network reportedly rejected an advertisement from the company Frida Mom, which sells products for personal care after giving birth, that it said was “too graphic,” showing mesh underwear and other bodily realities of the postpartum experience. Then, Natalie Portman showed up in an incredible garment that didn’t let us forget who would be missing from the stage later in the evening: the female directors overlooked in the best director category. Their names—Scafaria, Wang, Gerwig, Diop, Heller, Matsoukas, Har’el, Sciamma—were embroidered on her cape. (It was a more effective statement than Chris Rock’s opening comment that “vaginas” would be missing from the nominees that night.)

Once the awards actually started, there were a few more snubs. Little Women lost all the awards it was up for except best costume design—a bummer for that movie’s fans that also seemed to betray some bias in which aspects of a female-focused movie are valued by the Academy’s voters.

And in either a moment of brutal honesty or a complete lack of self-awareness—depending on your perspective— sound editor for Ford v. Ferrari Donald Sylvester thanked his wife for giving up her own career as a sound editor to raise their children so that he could win an award last night.

The big winner and history-maker of the night was Parasite, the first non-English language film to win best picture. Producers Kwak Sin-ae and Miky Lee got to close out the evening with heartwarming speeches. Lee, a media mogul in South Korea, thanked the country’s moviegoing audiences for their devotion, preventing the filmmakers from becoming “complacent”—a message she delivered after protests from the Oscars crowd forced the night’s producers to turn the lights back on and let her speak.

Let’s hope that next year, more women will be nominated in behind-the-scenes categories. In the meantime, I’m off to watch some documentaries.

- One last question. Reporter Megan Twohey, who with Jodi Kantor broke the Harvey Weinstein story, was interviewing Weinstein's current defense attorney Donna Rotunno when she asked one last question: Had Rotunno ever been sexually assaulted? The lawyer's response was stunning: She hadn't been, "because I would never put myself in that position." Listen to the jaw-dropping moment here: New York Times

- Au revoir. France is about to lose its only female CEO of a top publicly listed, or CAC 40, company. The board of energy utility Engie chose not to reappoint Isabelle Kocher to another term when her current one expires in May. Kocher, No. 5 on Fortune's Most Powerful Women International list, spent four years trying to push the $42 billion company away from fossil fuels toward renewable energy. The state owns 24% of Engie, and political battles contributed to Kocher's ouster. Bloomberg

- Awarding talent. A new literary award, the Carol Shields Prize for Fiction, will give $150,000 Canadian (about $113,000) to a female or nonbinary author each year starting in 2022. The financial reward dwarfs the amount that the usually male winners of the Booker Prize, Pulitzer Prize for fiction, or National Book Award receive. The new prize is named for the late Shields, a Canadian and American author whose work often revolved around domestic life. New York Times

- Dem report. In Friday night's Democratic debate, Sen. Elizabeth Warren stayed out of the fray—speaking less than Sen. Bernie Sanders, Joe Biden, Pete Buttigieg, and Sen. Amy Klobuchar. Klobuchar, for her part, sparred with Buttigieg. Before the debate, a Politico story reported that women of color had quit Warren's Nevada campaign en masse, complaining of a toxic work environment and tokenization. Warren apologized, saying, "I take personal responsibility for this, and I'm working with my team to address theses concerns."

MOVERS AND SHAKERS: Deputy managing director Carla Grasso will leave the International Monetary Fund, along with another official, as new chief Kristalina Georgieva seeks "more direct contact" with her department heads. The Wing hired Foursquare and Reddit alum Celestine Maddy as SVP of marketing and communications.

- Lawyers up! For the first time ever, the editors-in-chief of the law journals from the country's top 16 law schools are all women. The milestone was visible this week when Supreme Court Justice Ruth Bader Ginsburg addressed the group—noting that its makeup was wildly different from her time on the Harvard Law Review. The editors all collaborated on a Women & Law journal with essays from prominent female lawyers. Washington Post

- Block party. Engineer Tracy Chou, an outspoken advocate for diversity in tech, is launching a new app called Block Party. The app is designed to prevent online harassment and abuse, integrating features that let users control who they want to hear from in ways social platforms like Twitter have not. Chou says her company's vision is to "bring a safer online experience to everyone." CNET

- The other billions. After money manager Ken Fisher made a sexist comment at a conference, headlines eagerly followed the $4 billion in assets his firm lost as a result. But Fisher still controls $121 billion, as he discusses in this profile: Bloomberg

"To the girls, to the women, to the mothers, to the daughters, who hear the music bubbling within, please speak up. We need to hear your voices."