Sundance 2020: ‘Summertime’ director and cast on crafting a ‘love letter’ to Los Angeles 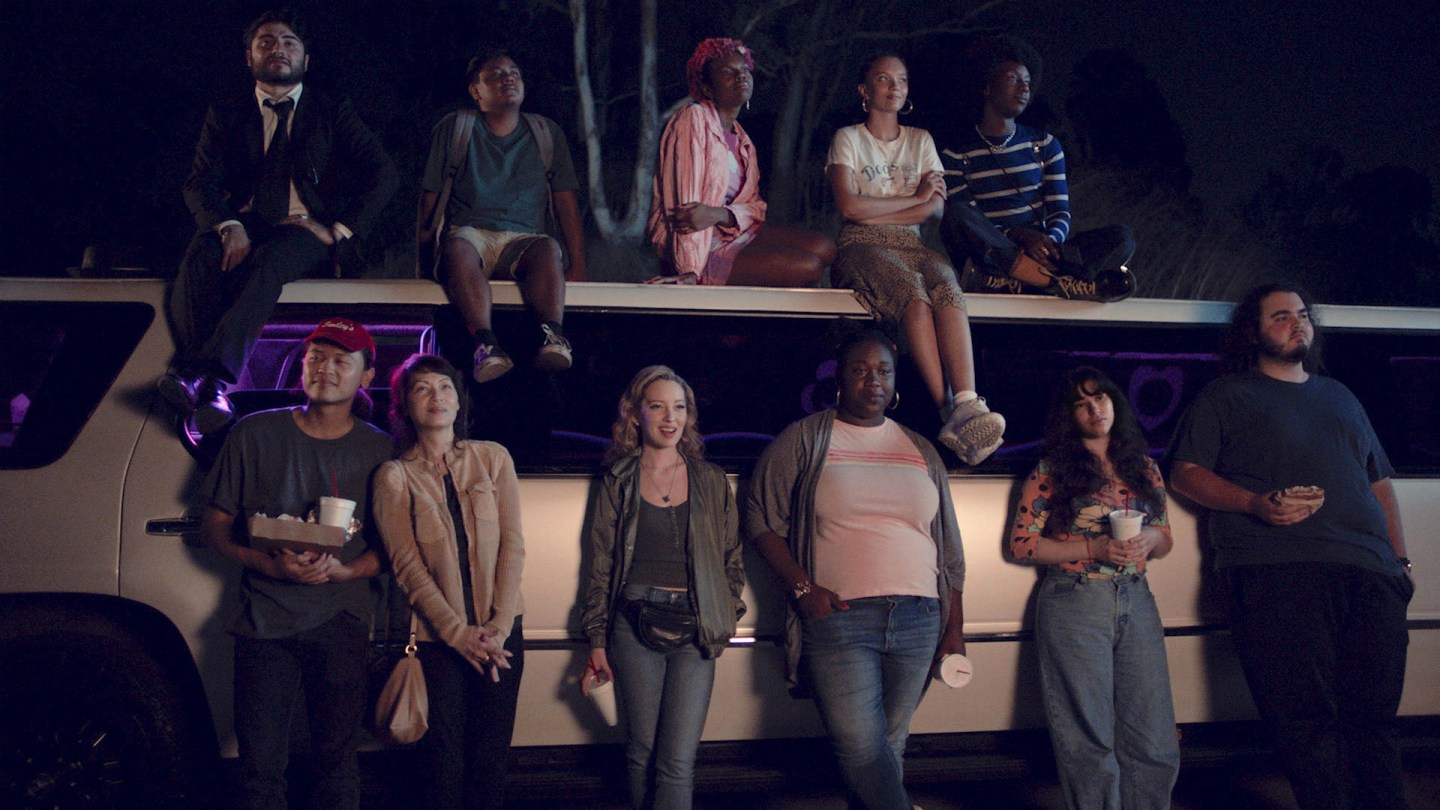 One of the most dazzling scenes in Summertime takes place on a doorstep, as a young woman finally acknowledges the emotional damage done to her by a callous ex-crush—in the form of a dizzying, scorched-earth poem, “Shallow,” that she delivers to his face.

For the poet in question, 24-year-old Angeleno wordsmith Marquesha Babers, filming such a moment was charged and cathartic, giving her the chance to wrest back control of a real-life situation that left her feeling powerless and devastated at the time, to speak her truth in a way she wasn’t able to back then.

“I say this a lot, but it was the therapy I never had,” says Babers of the scene, speaking to Fortune a few days after the film’s Jan. 23 premiere at the Sundance Film Festival. “By the final take, it was an out-of-body experience. I just let my soul go.”

Babers is gathered around a table in Park City, Utah, with her Summertime costar, acclaimed 20-year-old poet Mila Cuda, and the director, Blindspotting’s Carlos López Estrada. All three have spent the day speaking to press about their film, a spoken-word ode to 27 slam poets living and dreaming in modern-day Los Angeles, which premiered in Sundance’s NEXT section for boundary-pushing and emerging filmmakers and is now seeking distribution.

Though the lion’s share of Summertime‘s ensemble flew out for the public premiere screening, a high-energy affair filled with finger-snaps and spontaneous rounds of applause, they’ve mostly departed at this point, back to sunny, snowless California. If Babers, Cuda, and López Estrada are weary of discussing the film, it doesn’t show; they speak earnestly and with energy about constructing what they see as a deeply personal ode to Los Angeles and each other.

Experimental most through its Slacker-like structure, which flows from character to character every few minutes, Summertime is full of sequences that rise above reality. Its approach offers the young Angeleno protagonists a chance to treat scenes like blank canvases on which to stage their daydreams and declarations, however big or small. Maia Mayor struggles with anxiety and self-esteem issues accentuated by social media. The outspoken Tyris Winter spends much of Summertime longing after the perfect cheeseburger. In one vivid sequence featuring poet Paolina Acuña-González, a lecture from her on-screen mother about the dangers of wearing red lipstick spills into a gorgeously choreographed dance sequence on the street, La La Land reclaimed in a Latinx voice. In another, a young woman (Cuda) sees a homophobe shaming a queer couple on public transit and successfully stands her ground against him, reciting a fierce, crackling poem titled “Hey, I’m Gay” that eventually drives him off the bus.

“Sometimes, our surreal imaginings are a little more subtle, because what seems out of reach for us shouldn’t be,” says Cuda. “What’s magical for me is being able to speak my mind freely on a bus. That’s something I wish for.

“It’s not meant to be realistic,” adds Cuda, who pulled double duty as the film’s poetry supervisor. “It’s meant to be a world that imagines what happens when we don’t cut off the voices of young people and we allow them to express themselves.”

On this point, all three are insistent. In crafting Summertime, López Estrada never set out to create a realistic portrait of Los Angeles, though he says he does see his film as “a love letter to the city,” rather than to the mythology of Hollywood that so often overshadows public interest in the lives of people outside of it.

“It’s the same experience you’d have if you walked across the city in a day,” explains López Estrada. “If you woke up in Venice and spent the entire day walking east toward downtown, into East L.A., you’d stumble upon these people and their stories. Some would complement each other, one would take you to another, others would contradict themselves, you’d get to see some hilarious things, you’d get to see some weird-ass shit, and you’d get these beautiful moments of people living their lives.”

López Estrada is best known for directing 2018’s Blindspotting, an ambitious meditation on race relations, police violence, and male friendship in a rapidly gentrifying Oakland that also employed spoken-word poetry as the chosen language of the marginalized.

Summertime was inspired by a spoken-word showcase—part of the Get Lit program, devoted to encouraging literacy and creativity in high schoolers around L.A.—that López Estrada attended with two of the film’s producers eight months ago. As he watched, more than 25 young Angelenos (ranging in age from 17 to 27) performed some of their most personal work.

“I remember leaving that day just so inspired and so moved by the diversity of the people and their stories, the honesty with which they spoke, and how creative they were,” the director recalls.

Quickly, a plan began to form. From the beginning, López Estrada wanted to craft a film that could act as a showcase for the talents of young Angeleno poets and, in doing so, speak to a more organically diverse (and thus more honest) Los Angeles than he was used to seeing represented on screen.

Black, female, queer, Korean-American, and Latinx poets are all highlighted throughout the story, performing poems they had in many cases written years before López Estrada approached them. The net effect, he hoped, would be a “messy, imperfect mosaic” wherein each artist mattered as much as the next.

“When you’re an inch away from a mosaic, you won’t get what you’re looking at,” he says. “You won’t see the full picture. You’ll get an isolated, very confused fragment of something that isn’t whole. I think what we had to do was constantly remind ourselves that it was a mosaic, then take many steps back and not stress over the tiny details.”

Adds Babers: “You don’t have to try to make it diverse, because it’s already that way. We just came together to share our stories and experiences; it wasn’t calculated. That’s what was dope about it. It was just real.”

Summertime was met with largely warm reviews out of Sundance, though more negative ones focused on the magical realism of the film, as well as its extensive use of spoken-word to deliver essentially all of the major statements by its characters.

“You’re asking people to follow 25 stories over a day, to really suspend their disbelief, to think in metaphor, to change perspective frequently,” says López Estrada, who anticipated some critics would be more high on the film than others. “You need to have empathy to watch this movie. If you try to break it into a structure based on believability, don’t watch it, because you’ll just get angry.”

Cuda does take particular issue with the way some early reviews of Summertime characterized her poem; she feels some critics missed its point entirely. “A bus rider, sensing homophobia in a fellow passenger, stands to rhapsodize loudly on the topic of her sexuality, continuing long after the bigot has fled from her,” read one mixed-to-negative review, by The Hollywood Reporter. “This kind of tirade is why people dread public transportation, but in the world of Summertime, the entire bus applauds her.”

“I don’t care if you like the poem, and I don’t need you to like me,” continues Cuda. “But don’t jump to the defense of the comfort of someone being openly homophobic. That rubs me the wrong way, to be like, you see that scene and you think, ‘That poor man is being berated.’ Excuse me?”

Another section of The Hollywood Reporter‘s review calls Winter’s character “abrasive.” Summertime‘s crew of spoken-word poets think a lot about word choice, and that one did not sit particularly well with them.

“Tyris is a black, queer man, so to use the word ‘abrasive’ is charged with so many microaggressions,” Cuda explains. “The bias is very visible,” says Babers, which Cuda seconds.

Before wrapping up the interview, López Estrada acknowledges the desire he feels to defend Summertime‘s young Angelenos against such criticism, though he simultaneously knows there’s perhaps never been a young cast in Sundance better-equipped to speak for themselves.

“There’s a difference between not connecting to a poem, it not speaking directly to your experience, and questioning the right for these poets to speak, or questioning whether it’s appropriate for them to,” says López Estrada.

“I think that’s dangerous,” he adds. “I find it empowering that this group of people allowed us into their lives, were brave enough to talk about what’s most meaningful to them. That’s why we feel so at peace with what we did. We allowed for that to happen, for people to express themselves with words they chose and emotions they wanted to highlight. That’s what makes it beautiful.”

—The best movies that came out of the 2020 Sundance Film Festival
—How the Indie Spirits and Oscars will reflect an exhilarating—and often odd—awards season
—How Randy Newman’s family built a film-scoring dynasty over the course of a century
—How much is an Oscar worth?
—Bombshell‘s Charlize Theron and John Lithgow reflect on the film’s indelible impact
Follow Fortune on Flipboard to stay up-to-date on the latest news and analysis.