On a terrible day for stocks, One Medical sees its stock pop 47% from the IPO price 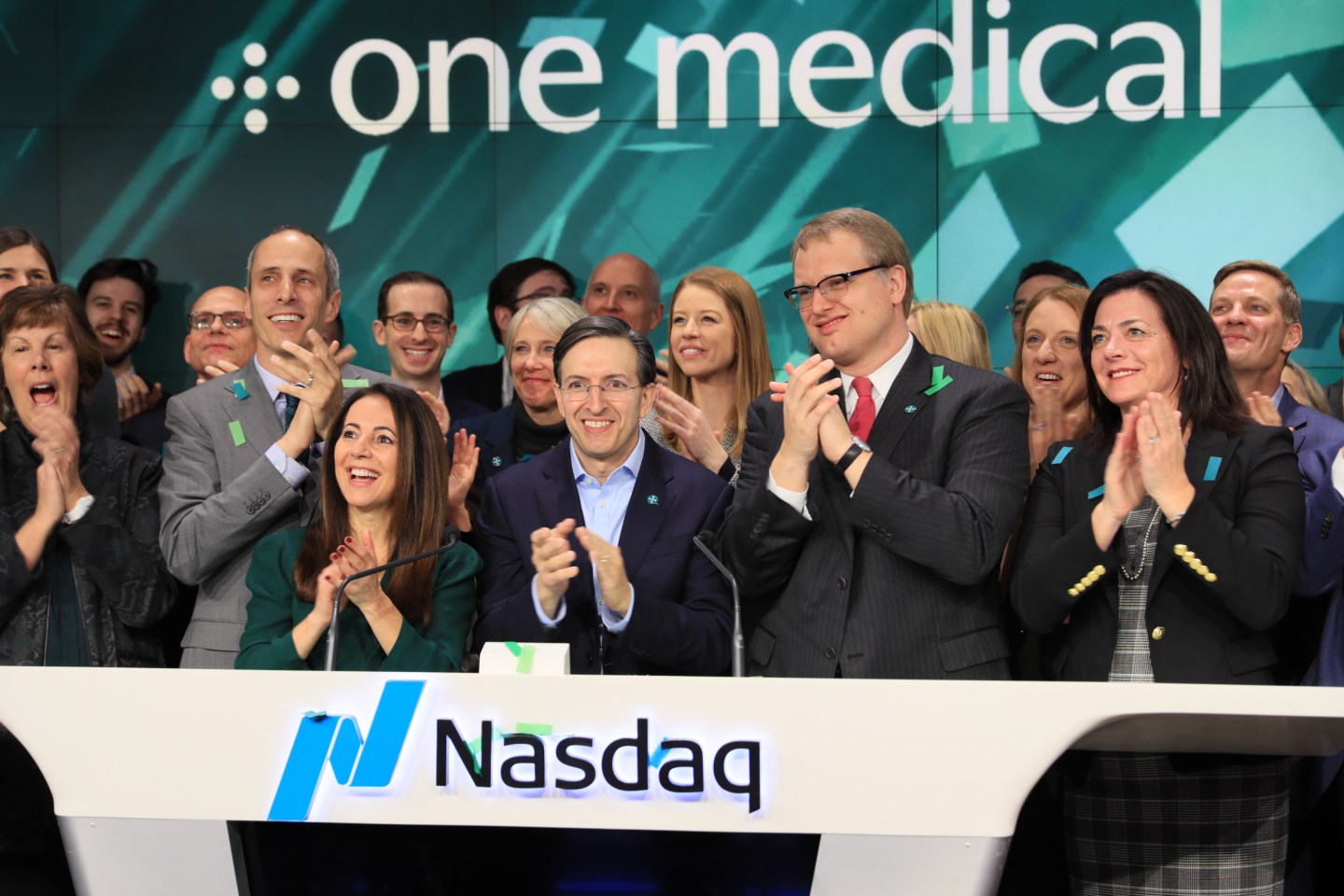 The One Medical executive team at the Nasdaq.
Outcast

While markets were roiled Friday over fears about the Chinese coronavirus epidemic, an unprofitable healthcare unicorn had its trading debut—and was a rare bright spot in a day where many sectors were deep in the red.

On Friday, healthcare provider One Medical raised $245 million in an offering of 17.5 million shares priced at $14—at the low end of its previous range. But the public market pushed shares up 47% in trading Friday even as the wider S&P 500 Index fell 2%—giving the company a valuation of $2.7 billion.

“As a public company we can now start raising more funding more cost effectively by getting our name out there,” said CEO Amir Rubin Friday following the company’s public debut. It listed as “ONEM” on the Nasdaq.

Founded in 2007 by entrepreneur Tom X. Lee, One Medical says it plans to simplify the healthcare process by charging consumers a $199 annual membership fee upfront. That fee gives access to a centralized platform that, among other things, includes a telemedicine offering, appointment booking, and online prescription renewals. Visits and other services, which may be completed at one of the company’s 77 locations, are billed separately.

Lee stepped aside as CEO in Aug. 2017, leaving the reigns to Rubin, then more recently stepped down as Executive Chairman. Lee now runs a telemedicine startup known as Galileo, and remains a shareholder in One Medical.

The company’s largest backers also include PE firm the Carlyle Group, venture capital firm Benchmark, and Oak Investment Partners as well as GV (backed by Alphabet), according to its S-1.

Even though public markets gave One Medical a thumbs up Friday, it’s still unclear how the company plans to reach profitability. While net revenue grew 20% to $212.7 million in 2018 compared to the year prior, losses also widened by 44% to $44.4 million.

“The jury is still out if you can still make money from this,” said Sandeep Dahiya, professor of finance at Georgetown’s McDonough School of Business. “And how big is demand is for the service and how many are willing to sign up?”

Early studies show that 52% of those 65 and up were open to using telehealth, according to an American Well study published September. In comparison, 74% of those in the 18-34-year-old range felt the same. And ostensibly, it’s the former group that requires the most intensive care.

One Medical’s filing does not delve into the average age of its clientele or their affluence.

Much of One Medical’s revenue comes from partnering with enterprises, which then spread the company’s services to their employees. While roughly 10% of its revenue comes from Google Inc., (one of its investors), One Medical’s Rubin says its enterprise clientele aren’t solely from Silicon Valley, but also include manufacturers and state governments.

In the wake of lackluster IPOs in 2019 including the likes of Uber and SmileDirectClub, the directive for hypergrowth has been paved over by talks of profitability and projections in many startups. When asked whether this broader trend had affected the company’s plans to expand into three new markets this year, Rubin says One Medical cannot yet give guidance on profitability yet, but that: “We believe in responsible growth,” he said. “Both top and bottom line are important.”

—All of your questions on filing taxes in 2020, answered
—The health of the economy in nine charts
—Global companies enter lockdown mode as coronavirus rocks China
—Bull market advice for investing in today’s market
—WATCH: Biggest investing opportunities and risks for 2020