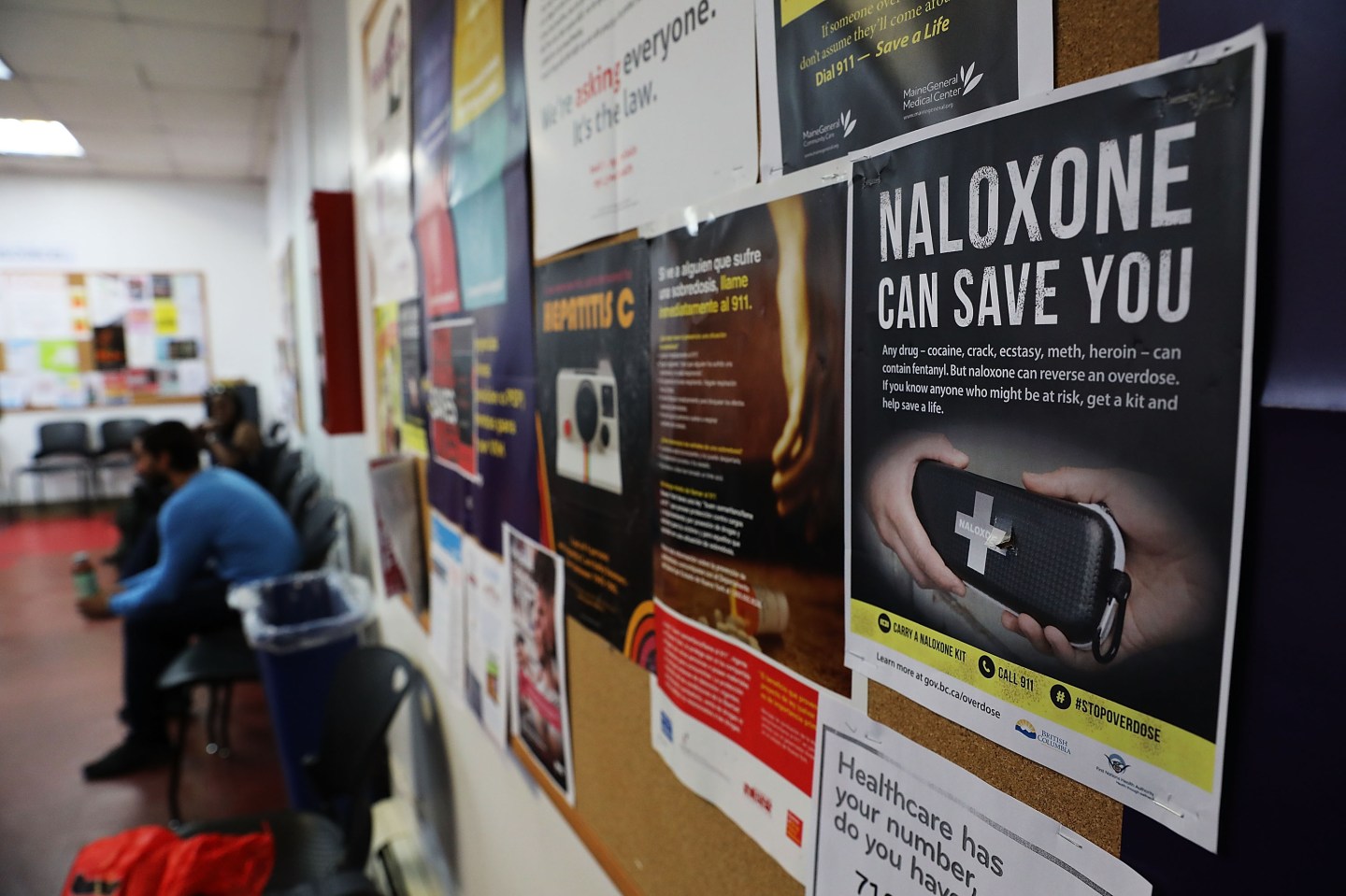 A sign for Naloxone hangs on a wall in a class on opioid overdose prevention held by non-profit Positive Health Project on August 9, 2017 in New York City. The weekly class offers individuals free training with Naloxone and everyone receives an overdose kit on completion of the hour course. According to the National Institute on Drug Abuse, nearly 35,000 people across America died of heroin or opioid overdoses in 2015. (Photo by Spencer Platt/Getty Images)
Spencer Platt—Getty Images

Life expectancy in the United States is up for the first time in four years.

The increase is small—just a month—but marks at least a temporary halt to a downward trend. The rise is due to lower death rates for cancer and drug overdoses.

“Let’s just hope it continues,” said Robert Anderson, who oversees the report released Thursday by the Centers for Disease Control and Prevention.

The latest calculation is for 2018 and factors in current death trends and other issues. On average, an infant born that year is expected to live about 78 years and 8 months, the CDC said.

For decades, U.S. life expectancy was on the upswing, rising a few months nearly every year. But from 2014 to 2017, it fell slightly or held steady. That was blamed largely on surges in overdose deaths and suicides.

Suicides continued to increase in 2018, as did deaths from the flu and pneumonia during what turned out to be an unusually bad flu year. But declines in some other causes of death—most notably cancer and drug overdoses—were enough to overcome all that, according to the report.

Cancer is the nation’s No. 2 killer, blamed for about 600,000 deaths a year, so even slight changes in the cancer death rate can have a big impact. The rate fell more than 2%, matching the drop in 2017.

“I’m a little surprised that rapid pace is continuing,” said Rebecca Siegel, a researcher for the American Cancer Society.

Most of the improvement is in lung cancer because of fewer smokers and better treatments, she said.

Also striking was the drop in drug overdose deaths that had skyrocketed through 2017. The death rate fell 4% in 2018 and the number of deaths dropped to about 67,400.

Deaths from heroin and prescription painkillers went down, however, deaths from other drugs—fentanyl, cocaine and meth—continued to go up. And preliminary data for the first half of 2019 suggest the overall decline in overdose deaths is already slowing down.

It’s still a crisis, said Katherine Keyes, a Columbia University researcher. “But the fact that we have seen the first year where there’s not an additional increase is encouraging.”

The national decline was driven by dips in 14 states, the CDC’s Anderson said. Those include states where overdose deaths have been most common, like Ohio, Pennsylvania, Kentucky, and West Virginia.

“We almost saturated our community with Narcan,” he said.

Nationally, for all causes of death, more than 2.8 million Americans died in 2018. That’s about 26,000 more than the year before, the CDC report found. The number went up even as the death rate went down, because the population is growing and a large group are retirement age baby boomers.

The U.S. has the highest suicide rate of 11 wealthy nations studied, according to a separate report released Thursday by the private Commonwealth Fund. That report also found U.S. life expectancy is two years lower that the average for the 10 other wealthy nations.

—10 stocks that are poised for a stellar 2020
—Will retiring baby boomers crash the stock market?
—Millions have been purged from voter rolls—and may not even realize it
—Inside New York City’s Chinese restaurant crisis
—All of your questions on filing taxes in 2020, answered