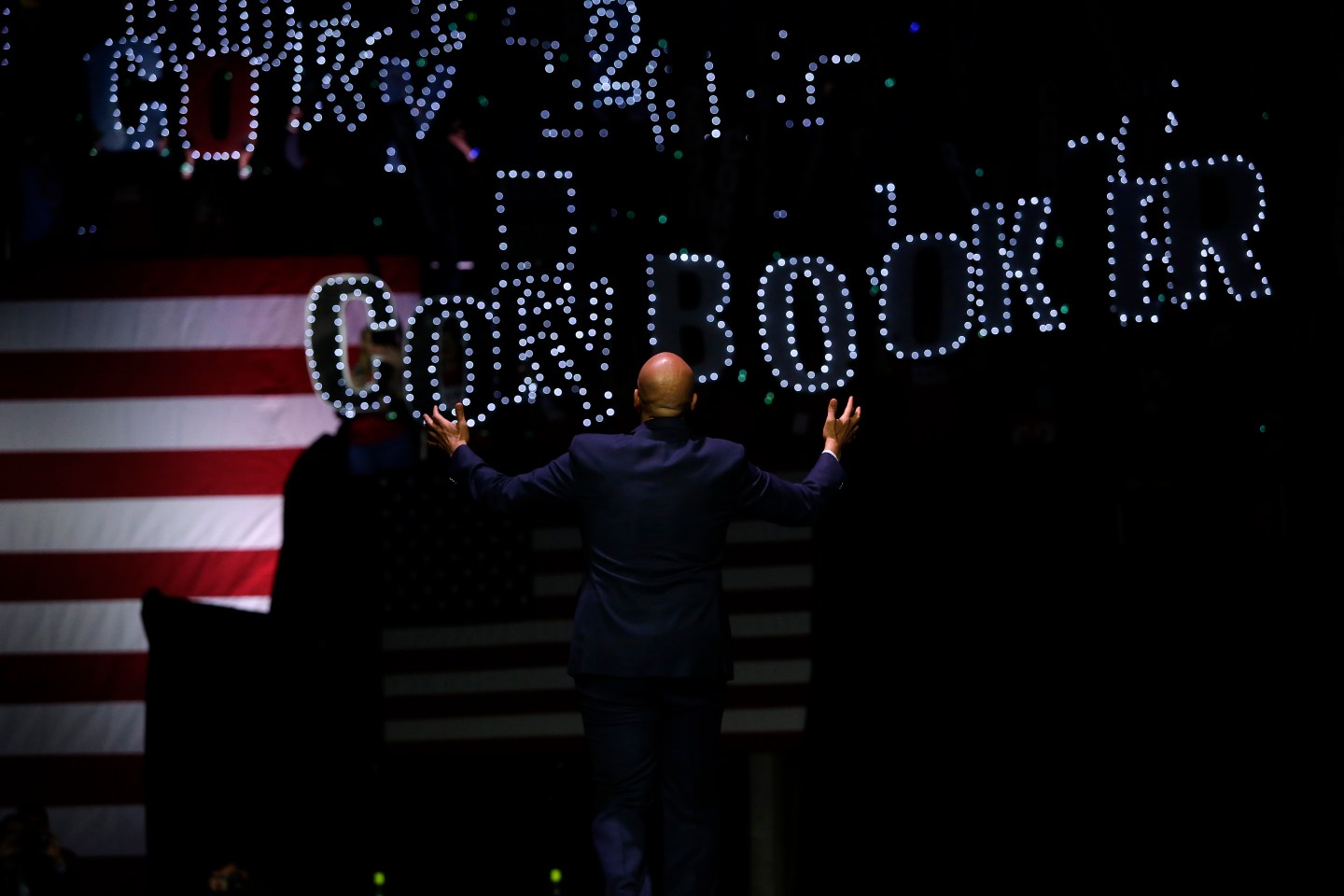 The Democratic debate last week featured a significantly winnowed field, with just six participants. The relatively small crowd was due in part to heightened criteria for participation as we close in on actual voting.

But it also reflected another phenomenon somewhat unique to the 2020 Democratic presidential primary: The fact that so many candidates, including top-tier political talent, have dropped out of the race before a single ballot has been cast in Iowa or elsewhere.

Senator Cory Booker (D-N.J.) was the most recent contender to preemptively leave the field. He announced his decision to stand down via Twitter on Jan. 13, a mere three weeks before Iowa caucus goers gather to select their favored candidates. “It’s with a full heart that I share this news…” he wrote. “I am so proud of what we built.”

Booker heads to a well-used exit that has already seen the likes of Senator Kamala Harris (D-Calif.), former Housing Secretary Julián Castro of Texas, and former Rep. Beto O’Rourke (D-Texas) pass through it.

In all, a mind-boggling 17 would-be White House aspirants have suspended or ended their campaigns.

The departures of even heavyweight candidates like Booker and Harris are, in one sense, unsurprising. Many (self-selected) lions of the Senate have seen their White House aspirations buried in the snows of Iowa and New Hampshire. And this year’s primary field is exceptionally crowded, so the culling should be extra dramatic. Still, what is novel this campaign cycle is how many candidates are closing up shop—and how early in the process the candidates are doing it.

Similarly, in the 2008 Democratic primary, then-Senator Joe Biden of Delaware, and his colleague, Chris Dodd of Connecticut, both hung on through the night of the Iowa caucus, and then announced they were done. (To be fair, the 2008 Iowa caucuses were held insanely early, on January 3.)

So, what’s different this time around?

A truism of presidential politics is that candidates don’t stop believing they can win the presidency; they stop running when their campaigns run out of cash. And this year, the table stakes for campaigning have been especially supersized, with Senator Bernie Sanders (I-Vt.), Senator Elizabeth Warren (D-Mass.), South Bend Mayor Pete Buttigieg, and even businessman Andrew Yang proving to be able fundraisers.

Add to the mix the mind-blowing campaign spending self-funded by billionaires Tom Steyer and Mike Bloomberg, and you have a money arms race that quickly separates the haves from the have-nots.

For some struggling candidates—Castro in particular—the calculus likely includes making a play to be the eventual running mate on the Democratic ticket.

Back in December, Castro was polling at around 4%. That level of support was very unlikely to be enough for him to place well in the Iowa caucus, but it could prove to be a valuable form of political capital. In a tight race, those votes could provide the margin of victory for another candidate.

Upon dropping out, Castro quickly endorsed and then vigorously campaigned for Warren; perhaps as important, he brought over some members of his political organization. If Warren prevails, Castro’s chances of becoming a running mate are surely heightened.

For senators like Amy Klobuchar of Minnesota, Warren, and Sanders, the next few weeks will likely be brutal, as they shuttle back and forth from Iowa, where they are hunting for caucus-goers’ votes, to Washington, D.C., where their votes in the impeachment trial before the Senate will be counted. Booker cited impeachment as an immoveable obstacle in his path to the nomination.

But another explanation behind all the dropping out is that the luster of an attempted presidential campaign is not what it used to be. For decades, running for President was seen as a sort of rite of passage for political power players.

Leading lights like Senator Ted Kennedy (Mass.), Senator Bill Bradley (N.J.) and Senator John Glenn (Ohio) on the Democratic side, and Rep. Jack Kemp (N.Y.), Senator Howard Baker (Tenn.), and Mitt’s dad Governor George Romney (Mich.) on the Republican side, took their shot, fell short, and returned to their day jobs atop the political establishment, no worse for wear.

Nowadays, however, many candidates are pursuing the White House earlier in their careers, following in the footsteps of the relatively youthful Bill Clinton (elected at age 46), George W. Bush (54), and Barack Obama (47).

To them, the risk-reward calculus of a failed campaign is somewhat different; a hard primary loss can potentially tarnish a promising political brand, revealing previously unseen vulnerabilities. And with party insiders exerting less control over the electoral process, and the power of incumbency—at least in Congressional races—on the decline, the threat of a future primary is something that even the top politicians take seriously now. This was reportedly a factor in Harris’s decision to forego the caucuses.

According to Politico, Harris and her political inner circle worried that a lackluster showing in Iowa would encourage rivals in California to run against her in 2022 when she is up for re-election to the Senate. Booker suggested much the same vibe in dropping out, saying that now his first order of business (besides impeachment, naturally) is to make sure his base of support in New Jersey remains steadfast.

And finally, there’s the fact that the goal of running for President is no longer entirely about running for President anymore. With the rise of cable news and the 24/7 political conversation living on Facebook and elsewhere online, more people see the presidential primary as an audition for a lucrative career as a speaker, author, and TV pundit.

Santorum, Al Sharpton, Pat Buchanan, and Mike Huckabee parlayed presidential campaigns into gigs as paid analysts, opening the doors for media-centric, non-traditional candidates like Yang and Marianne Williamson today. For a portion of the field, the act of chasing votes is not principally about winning votes, but instead using free media to raise their name recognition.

As the reasons and desired outcomes of a presidential bid have become more varied, more candidates have decided to jump into the fray. The trend toward early dropouts, so pronounced this year, was also in effect in 2016, when 17 candidates declared for the presidential nomination.

The outcome of that chaotic 2016 primary may well explain why we’ve seen so much fluidity this time around. In a world where Donald Trump can emerge from the pack and surprise the political establishment, anything seems possible—so the number of people who wake up in the morning, look in the mirror, and see a future world leader can only have grown.

At the same time, the harsh realities of running for President eventually take their toll. In 2016, the candidates who stayed in the longest served as cannon fodder—or, more accurately, comedic foils—for Trump, arguably diminishing their position with the party and with voters.

And even if the President isn’t taunting you on Twitter or at his rallies, running for President is ultimately an incredibly thankless proposition. Like that old saying about owning a boat goes, the two best days in a candidates’ campaign are the day they announce it and the day they win—or drop out.

All the stuff they have to do in between is grueling and expensive. For people who are used to winning, losing doesn’t feel like a great way to spend their time.

—The Chief Justice and impeachment: John Roberts’ role in the Trump trial
—How impeachment hearings in the Senate will work
—Understanding the 2020 election as brand marketing
—A Q&A with Sen. Kelly Loeffler on her unlikely path to Washington
—The World’s Most Admired Companies in 2020
Get up to speed on your morning commute with Fortune’s CEO Daily newsletter.