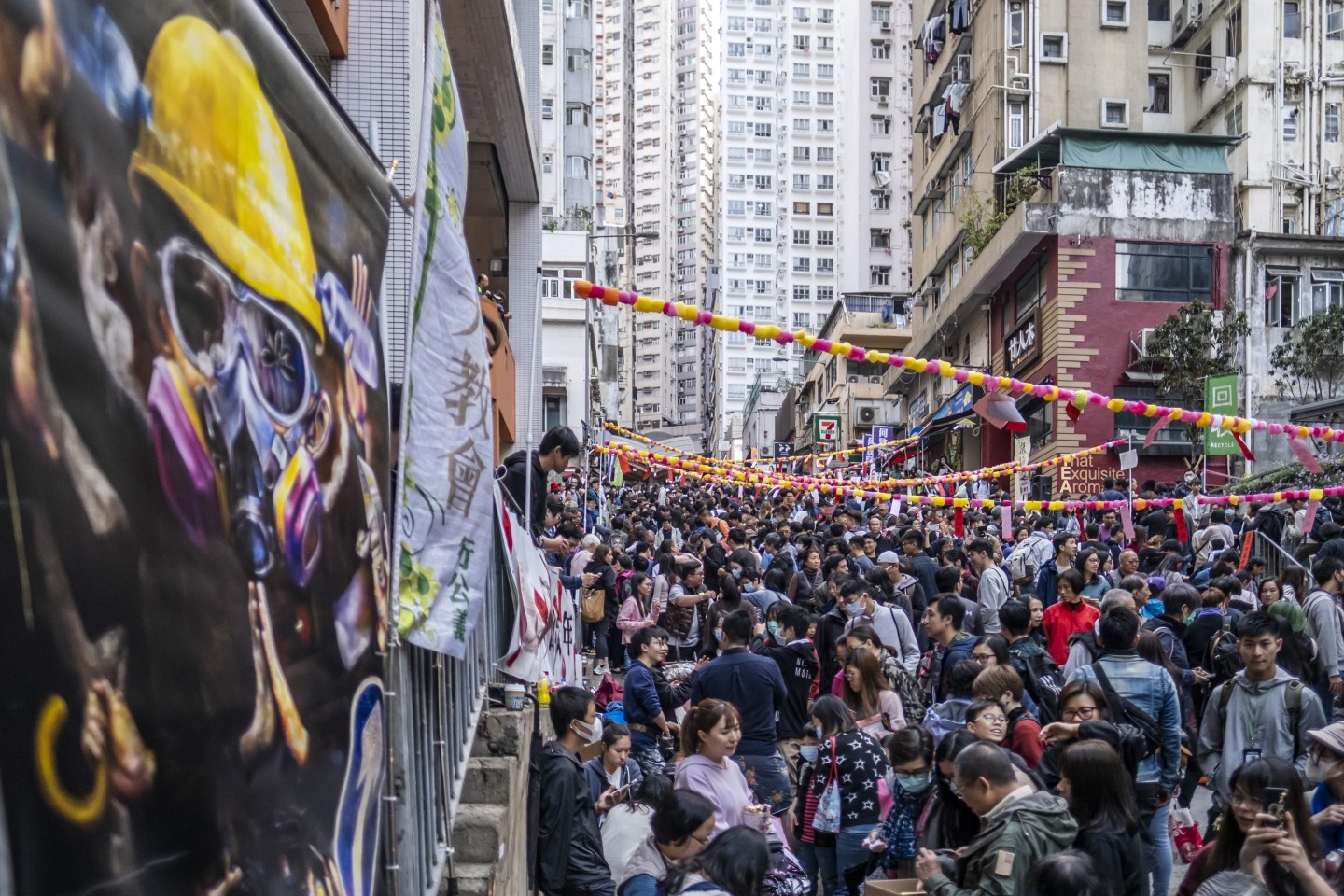 People walk past a protest banner during a Lunar New Year fair organized by pro-democracy district councilors on Centre Street in the Sai Ying Pun district of Hong Kong, China, on Saturday, Jan. 18, 2020. The Lunar New Year, when spending traditionally peaks in Hong Kong amid a flood of vacationing Chinese mainlanders, will likely not provide its usual boost after months of fiery demonstrations that have driven tourists away. Photographer: Justin Chin/Bloomberg via Getty Images
Justin Chin—Bloomberg/Getty Images

A deadly virus in China. A rating downgrade from Moody’s Investors Service. Violent clashes over the weekend.

Welcome to Hong Kong, where reasons to sell stocks are mounting ahead of the Lunar New Year holiday. The Hang Seng China Enterprises Index fell 3.2%, the most since October 2018, while the MSCI Hong Kong Index dropped 2.7%, hitting its 200-day moving average. Life insurers, automakers and casino operators in nearby Macau were among Tuesday’s biggest decliners. Trading volume for stocks in the benchmark Hang Seng Index was 52% above the 30-day average.

Hong Kong stocks had been among the world’s best performers since early December, helped by mainland investors, gains in the local currency and an initial trade deal between the U.S. and China. But the Hang Seng stalled at the 29,000 point level last week, and there’s been a surge in stock sales this month, which has previously foreshadowed near-term market tops.

“Investors would want to cash out before the holiday because there is so much bad news,” said Jackson Wong, asset management director at Amber Hill Capital Ltd. “It is uncertain how the virus outbreak will develop in China during the holidays. We are holding more cash and we are avoiding travel-related stocks and some technology stocks that had already jumped a lot earlier.”

Stock indexes fell more than 1% in China, outpacing declines elsewhere in Asia, while Asian currencies were widely lower. The Chinese yuan weakened as much as 0.6% against the U.S. dollar, its biggest drop since August, after a run of big gains. China’s 10-year government-bond yield continued to fall, hitting a fresh four-month low Tuesday at 3.033%.

“Most people have only very limited information about this virus, and its too early to tell how serious it is, so it makes sense for people to be defensive at this moment,” said Chi Man Wong, Honyuang Kong-based analyst at China Galaxy International Financial Holdings Ltd. He added the Moody’s downgrade likely isn’t having an impact regionally as the move was signaled by September’s reduction to Hong Kong’s ratings outlook. Since then, the city’s economy has slid into recession.

Moody’s said Monday that “the absence of tangible plans to address either the political or economic and social concerns of the Hong Kong population that have come to the fore in the past nine months may reflect weaker inherent institutional capacity than Moody’s had previously assessed.”

Also, Tuesday was the last day mainlanders could trade Hong Kong equities through trading links with the city before the week-long Lunar New Year holiday in China. Markets are closed for two days next week in Hong Kong, while stocks and bond trading in Taiwan has already stopped for the holiday. The inability to trade is prompting some investors to harvest some recent profit, analysts say.

Investors had been strongly bullish in much of the world since early December, helped by eased trade tensions and signs that global stimulus is likely to continue. Optimism in markets like China and Taiwan has been very strong of late, with heavy foreign inflows to both.

That could be shaken by new developments on the new virus originating in central China. Medical workers being infected signals it could be more easily transmitted than previously thought, raising concerns about a potential repeat of the 2003 outbreak of Severe Acute Respiratory Syndrome, or SARS, which killed almost 800 people.

“There is a risk of an exponential outbreak of a SARS-like virus, so investors are choosing to be risk-off” ahead of the Lunar New Year holiday, said Zhou Hao, a senior emerging markets economist at Commerzbank AG. Hundreds of millions of people travel in China during the period, sharply increasing the risk that the virus’ spread sharply accelerates.

—Why the U.K. is bailing out regional airline Flybe when it’s let others fail
—The Carlos Ghosn affair: A look inside the motivations of a fugitive CEO
—Experts doubt China can fulfill its targets in “Phase One” of the U.S. trade deal
—Laws meant to close down tax havens and shut loopholes could have opposite effect
—7 M&As that defined a decade of dealmaking and reshaped the economy
Catch up with Data Sheet, Fortune’s daily digest on the business of tech.