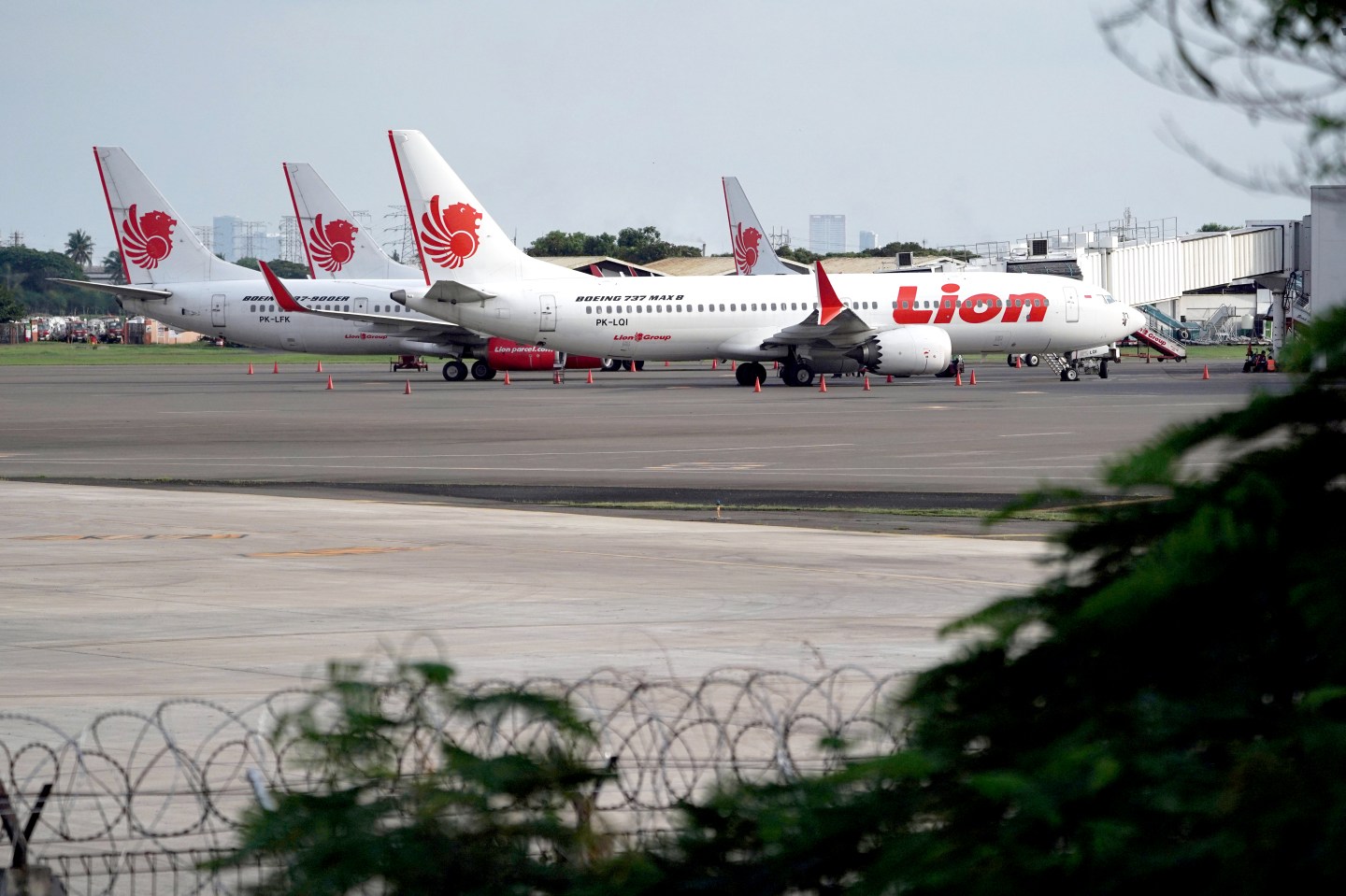 A Lion Air Boeing Co. 737 Max 8 aircraft, right, stands on the tarmac at Soekarno-Hatta International Airport in Cenkareng, Indonesia, on Tuesday, March 12, 2019. Indonesias Lion Air, one of the biggest customers of Boeings 737 Max plane, is suspending delivery of four of the jets it had on order for this year after the second fatal accident involving the model in five months. Photographer: Dimas Ardian/Bloomberg via Getty Images
Dimas Ardian—Bloomberg via Getty Images

Indonesia’s Lion Air considered putting its pilots through simulator training before flying the Boeing Co. 737 Max but abandoned the idea after the planemaker convinced them in 2017 it was unnecessary, according to people familiar with the matter and internal company communications.

The next year, 189 people died when a Lion Air 737 Max plunged into the Java Sea, a disaster blamed in part on inadequate training and the crew’s unfamiliarity with a new flight-control feature on the Max that malfunctioned.

Dewi Manik, shows a photo of her husband, Rudy Lumbantoruan, who was a victim on board Lion Air flight JT-610, as she boards an Indonesian Navy ship to visit the site where the aircraft crashed to mark the disaster’s one-year anniversary. At Tanjung Priok port on Oct. 29, 2019 in Jakarta, Indonesia.
Ulet Ifansasti—Getty Images

Boeing employees had expressed alarm among themselves over the possibility that one of the company’s largest customers might require its pilots to undergo costly simulator training before flying the new 737 model, according to internal messages that have been released to the media. Those messages, included in the more than 100 pages of internal Boeing communications that the company provided to lawmakers and the U.S. Federal Aviation Administration and released widely on Thursday, had Lion Air’s name redacted.

But the House committee provided excerpts of those messages to Bloomberg News that un-redacted the Indonesian carrier’s name.

“Now friggin Lion Air might need a sim to fly the MAX, and maybe because of their own stupidity. I’m scrambling trying to figure out how to unscrew this now! idiots,” one Boeing employee wrote in June 2017 text messages obtained by the company and released by the House Transportation and Infrastructure Committee.

In response, a Boeing colleague replied: “WHAT THE F%$&!!!! But their sister airline is already flying it!” That was an apparent reference to Malindo Air, the Malaysian-based carrier that was the first to fly the Max commercially.

Doing simulator training would have undercut a critical selling point of the jet: that airlines would be able to allow crews trained on an older 737 version to fly the Max after just a brief computer course.

In a report on the Oct. 29, 2018 accident, Indonesia’s National Transportation Safety Committee cited a failure by Boeing to tell pilots about the new flight-control feature on the jet, called MCAS, and the need to provide training on it so that pilots would be able to better respond to malfunctions.

Yoda prays for his best friend who died in the Lion Air plane crash in 2018, at a cemetery in Jakarta Oct. 29, 2019. Grieving relatives tossed flowers into the sea on October 29 where an Indonesian Lion Air jet crashed a year before, killing all 189 aboard.
BAY ISMOYO—AFP via Getty Images

The report also cited shortfalls in the crew’s ability to perform emergency check lists, fly the plane manually and communicate about the emergency. The copilot, who took nearly four minutes to look up an emergency procedure he was supposed to have memorized, was singled out for repeated failures during training.

To be sure, simulator training that didn’t address a malfunction of the system like the one crews in both disasters encountered might not have saved the jets. Separate decisions had been made not to inform pilots about MCAS, something that has drawn sharp criticism from pilots’ unions in the U.S.

But the prospect of simulator training for Max pilots — and opposition to it within Boeing — were major themes in the latest batch of embarrassing internal company messages released last week.

Lion Air has declined to comment whether it was the carrier discussed in the messages released last week by Boeing but people familiar with the exchanges, who asked not to be identified discussing a private matter, said Lion Air had initially raised concerns about the need for simulator training on the Max but ultimately accepted Boeing’s recommendation that it was unnecessary.

A Boeing 737 Max airplane is seen parked at a Boeing facility on Aug. 13, 2019 in Renton, Washington.
David Ryder—Getty Images

Some of the messages revealed the pressure on employees — and customers — to avoid the additional training. Boeing’s resistance to simulator training for Lion Air pilots was reported earlier by Forbes.

Boeing didn’t respond to a request for comment but said last week that “any potential safety deficiencies identified in the documents have been addressed.”

“These documents do not represent the best of Boeing,” Greg Smith, the company’s interim CEO, said in a message to employees Friday. “The tone and language of the messages are inappropriate, particularly when used in discussion of such important matters, and they do not reflect who we are as a company or the culture we’ve created.”

The communications include a 2017 email from Boeing’s chief technical pilot on the 737 in which he crowed to colleagues: “Looks like my jedi mind trick worked again!” The email was sent two days after the earlier messages expressing alarm about Lion Air potentially demanding simulator training.

Attached was a forwarded email exchange in which the person warned an unnamed recipient against offering simulator training for Max pilots, pushing instead for the computer-based course that regulators had already approved for flight crews transitioning to the Max from earlier 737 models.

“I am concerned that if [redacted] chooses to require a Max simulator for its pilots beyond what all other regulators are requiring that it will be creating a difficult and unnecessary training burden for your airline, as well as potentially establish a precedent in your region for other Max customers,” the Boeing pilot wrote in the forwarded message.

While Lion Air was not identified in the redacted emails, the discussions are consistent with those Boeing held with Lion Air at the time, according to people familiar with the matter.