How the Re-Election of Taiwan’s President, a China Critic, Could Reshape Asia’s Economic Landscape 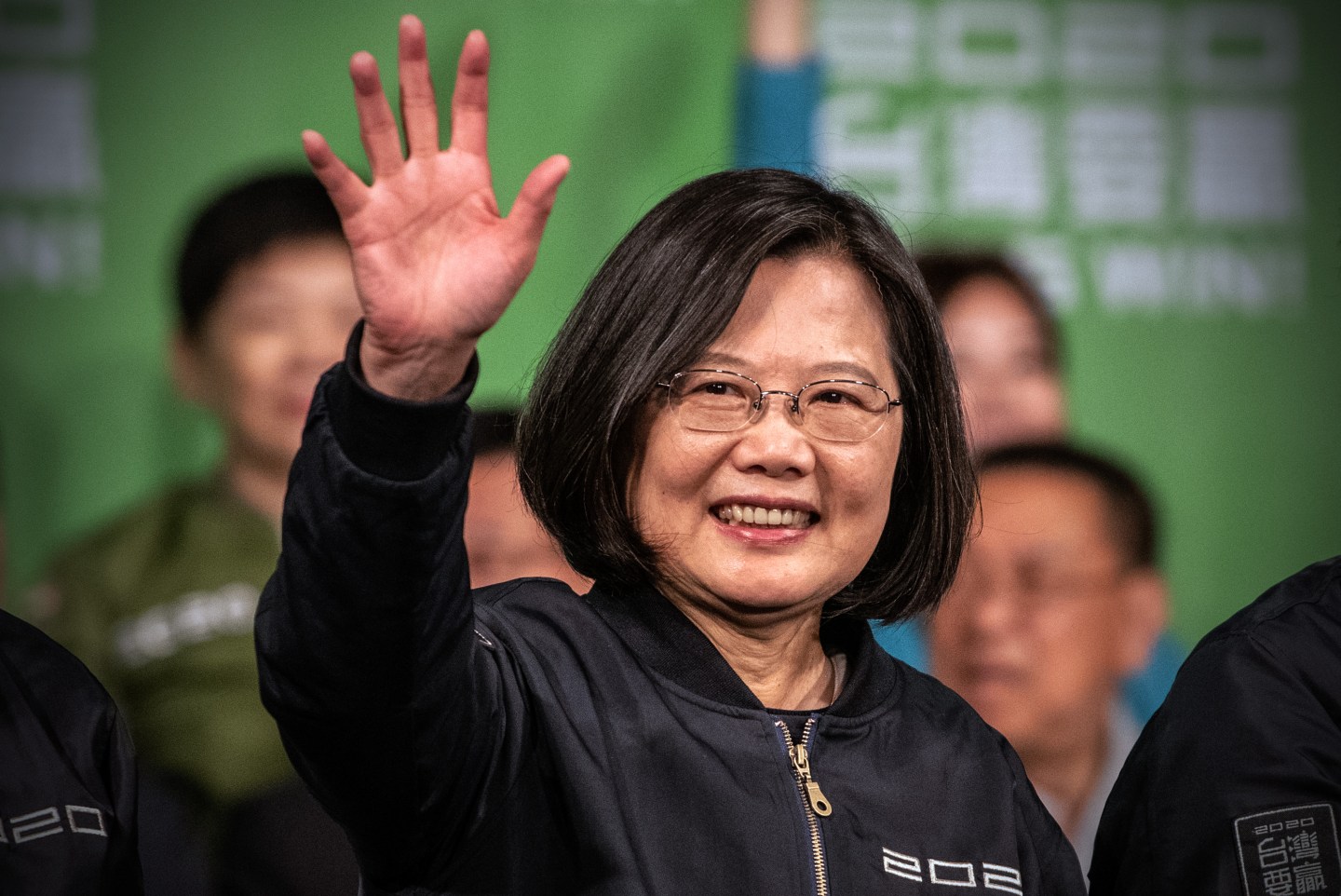 TAIPEI, TAIWAN - JANUARY 11: Tsai Ing-Wen waves after addressing supporters following her re-election as President of Taiwan on January 11, 2020 in Taipei, Taiwan. Tsai Ing-Wen of the Democratic Progressive Party (DPP) has been re-elected as Taiwans president as voters displayed their disapproval of Beijing by opting for a leader who had campaigned on defending their country from China. (Photo by Carl Court/Getty Images)
Carl Court—Getty Images

Over the weekend, millions in Taiwan opted to reject Mainland China’s economic and political vision for its future, setting the self-governed island on an economic course that looks set to be veering away from Beijing as fast as possible.

Incumbent president Tsai Ing-wen of Taiwan’s Democratic Progressive Party (DPP) took 58% of Taiwan’s vote against challenger Han Kuo-Yu of the Kuomintang Party (KMT) on Saturday. Tsai, a former law professor with a technocratic reputation, has led Taiwan for the last four years, promoting progressive social policies, such as marriage equality; led the country through unpopular safety net reforms; and has been a notable critic of Beijing.

Han, on the other hand, is a populist mayor of Kaohsiung, a city in the south of Taiwan. Han, who had only recently emerged as a political star after winning in a city traditionally heavily tilted towards the opposing party, ran on a platform of growing Taiwan’s economy through closer economic integration with Beijing.

Tsai’s landslide victory had once been thought a long shot, as she was deeply unpopular in Taiwan for much of her first term. A speech from Chinese President Xi Jinping early last year, where he posed the idea of exercising greater political control over Taiwan, and months of intense protests against China’s government in Hong Kong rejuvenated her campaign, however, as voters sought to reject Beijing’s encroaching influence over the island.

While the election result largely revolved around politics, it also sets forth a distinct economic path for Taiwan’s future. In lieu of relative economic safety through partnership with Beijing, the election may push Taiwan into closer alignment with other countries across Asia and the U.S.

In dealing with Taiwan, Beijing has employed a system of doling out preferential treatments and economic benefits to certain groups or political parties it supports (such as the KMT), and punishments to those who oppose their actions (such as Tsai and the DPP).

Syaru Shirly Lin, a world politics professor at the University of Virginia who focuses on China and Taiwan, calls this a “carrot and stick strategy” used to promote behaviors and policies more friendly to Beijing.

It is a strategy that has only ramped up in recent years.

“Under Xi Jinping, the benefits have been greater” for those friendly to Beijing, said Lin. “On the stick side, there is no doubt that both the military pressure as well as business pressure is greater than ever before to conform to Beijing’s goals.”

While tourism isn’t one of Taiwan’s most important economic sectors, it illustrates this ‘carrot and stick’ method for dealing with Taiwan.

In 2008, under the leadership of President Tsai’s predecessor Ma Ying-Jeou, a KMT member and Beijing-friendly politician, Taiwan and China agreed for the first time to allow mainland Chinese tourists to visit Taiwan.

After taking in almost a million Chinese tourists in 2009, Taiwan took in over four million mainland tourists at its peak in 2015, making up almost half of total arrivals, according to Taiwan’s Tourism Bureau. At the time, this meant that China was responsible for a large portion of the over $14 billion in annual revenue brought in from tourism.

“Tourism was expanded rapidly during the Ma administration, and you could say this was a weapon meant to support the KMT and build reliance on Chinese tourism,” said Ian Rowen, a professor of geography and urban planning at Nanyang Technological University in Singapore. “That was an incentive-based approach that’s shifted to a punitive approach under Tsai.”

In the lead up to Tsai’s re-election over the last year, China significantly curtailed group tours and banned individual mainlanders from visiting the island altogether. China’s State Council said in October the moves were aimed at deterring the DPP’s “independence” activities, which “destroyed the foundation and conditions” for travel.

For Lin, the possibilities and potential perils in Taiwan’s relationship with China come down to the mainland’s economic power.

“The gravitational force of the Chinese market and the economic benefits that Beijing provides is more attractive than ever before,” said Lin. “[But] being reliant on one particular customer, which is also politically driven to subsume you, is very dangerous.”

China and Taiwan’s economies have long been deeply intertwined and many of Taiwan’s largest companies, such as the electronics manufacturer Foxconn, have relied on Chinese factories to build their products. In the last several years, China has also become an increasingly important market to sell to, especially for companies like Taiwan Semiconductor Manufacturing Company (TSMC) which sells semiconductor chips to China’s booming electronics market.

Mark Liu, chairman of Taiwan Semiconductor Manufacturing Co. (TSMC), speaks during the company’s annual general meeting in Hsinchu, Taiwan, on June 5, 2019. TSMC has been stuck in the midst of a nearly two-year long trade war between the U.S. and China.
Ashley Pon—Bloomberg via Getty Images

With Taiwan’s defiance of Beijing now cemented for at least the next four years, the question becomes one of whether and how this economic relationship will continue.

Alex Tan, professor of political science and international relations at the University of Canterbury, specializes in Sino-Taiwanese relations. He says that even if Beijing is thinking about further punishing Taipei, it might be running out of options.

“The question for Taiwan is, will China use the next four years to squeeze their economic space even more?” said Tan. “I’m not sure there is more to be done in the domestic space, but probably more in the international space.”

Under Tsai Ing-Wen in the last few years, Taiwan has pursued a new ‘southbound’ strategy, attempting to develop closer economic and educational ties with countries in south and southeast Asia.

According to Lin, this was in part brought on by a desire to diversify away from China’s economy, but also was due to the fact that Chinese suppliers simply do not supply the same low-cost manufacturing that they used to.

At the same time, however, China has embarked on its own investment scheme through the Belt and Road Initiative (BRI) across Asia and beyond, with investments and projects that far exceed what Taiwan could offer. One battlefield, Tan suggests, might therefore take place in regional trade agreements and other mechanisms as China leverages its power to thwart Taiwan.

However, in the end the U.S. will likely have the most say over the degree to which Taiwan can exercise economic autonomy from China.

The U.S., Taiwan’s most powerful ally and military protector, has been engaged in a nearly two-year long trade war with China that has come to involve Taiwan. Many Taiwanese companies trade with both the U.S. and China, and the U.S. government reportedly asked TSMC to stop selling chips to Chinese tech giant Huawei earlier this year.

TSMC, however, continues to supply Chinese tech firms with chips that they desperately need, and a number of Taiwanese and Chinese businesses remain committed to cross-strait ventures, Tan said. This means that however tense relations are between President Tsai and Beijing, economic relations will likely largely stay intact unless the U.S.-China trade further deteriorates.

Still, the difficulty in doing business in both Taiwan and China is only increasing, which may be a signal towards the rising fragmentation of the world’s economy.

“It’s getting harder and harder to operate a business that moves between Taiwan and China, absolutely,” said Lin. “Businesses walk this impossible tight rope, they are at the front line of this China dilemma… Taiwan is a litmus test for different actors all around the world.”