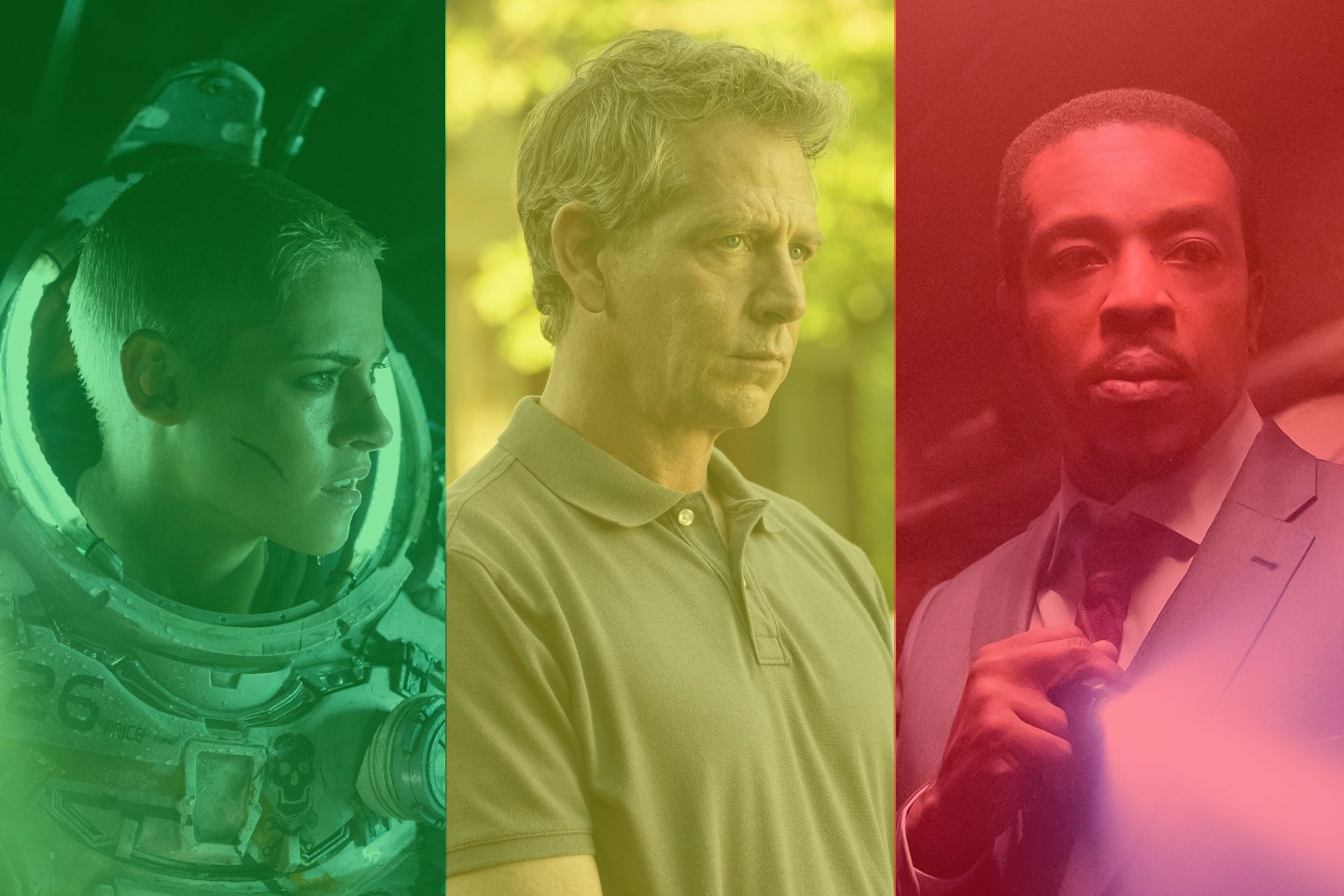 SEE IT: ‘Underwater’ (In theaters)

Aquatic horror is so fiendishly effective at imperiling its protagonists that it’s almost surprising so few films in the subgenre have been made. What could be more terrifying than the isolation and ever-present danger of existing on the sea floor, diving suits barely holding together under unfathomable pressure—even before whatever else lurking down there, accustomed to maneuvering and surviving such an inhospitable environment, reveals itself?

Ocean explorers have rarely felt as vulnerable—or, frankly, as screwed—as they do in Underwater, director William Eubank’s Alien-indebted tale of puny humans struggling to survive a deep-sea disaster when their drilling rig is catastrophically damaged by what at first seems to be seismic activity.

Few genre scripts this year are likely to match the immediate ferocity of Underwater‘s opening. After a few news clippings that detail a faceless corporation’s drilling operations into the Mariana Trench, the ocean floor’s deepest-known point, we meet mechanical engineer Norah (Kristen Stewart), seven miles below the sea’s surface. Brushing her teeth, she stops to examine a spider crawling around the sink, and wonders with an endearing mercy how it ended up there.

That’s the only moment of peace she’s afforded before Underwater‘s vice-like 95-minute structure begins to grip. Seconds later, that aforementioned earthquake weakens the walls of her station, and water begins to crash in with terrifying force. Norah barely escapes with her life, managing to link up with other survivors and survey the damage. In order to return to the surface, they have little choice but to abandon the base, walking two miles across the ocean floor to reach another outpost, where hopefully undamaged escape pods are waiting for them. Then there’s the small matter of what’s making all those screeching noises—could it be creatures newly freed from suboceanic thermal vents, emerging from the depths with razor-sharp teeth and a killer home field advantage?

Armed with an economical script by scribes Brian Duffield and Adam Cozad, Eubank has made a truly lean, mean creature feature, but he takes his time in teasing out the true nature of the threats facing Norah and her fellow survivors, some cribbed from the Lovecraft playbook and others reminiscent of Neil Marshall’s The Descent. There’s good reason for the filmmakers to take their time. Eubank’s camerawork often puts audiences inside Norah’s helmet, playing up just how dire their circumstances are with the fiendish suggestion its glass might crack at any point. As Norah gazes into the murky darkness of open water, sediment obscuring her view and setting up all kinds of devilish jump-scares, almost as scary as what might surge into view is the prospect that nothing will—that the depths will simply yawn, impenetrable, until the oxygen runs out and she blinks into nothingness. Even without Underwater‘s lithe, lethal creatures swimming around out there in the dark, the sea imparts a terror all its own.

STREAM IT: ‘The Outsider’ (HBO/HBO Now)

Many Stephen King adaptations make the mistake of hanging on the author’s every line. Responsible for some of horror fiction’s most towering tales though he is, from Carrie to The Shining, King is first and foremost a master of the written word, known best for his detailed sketches of small-town Americana and the grim phenomena threatening to overwhelm it. There’s a reason his memoir On Writing is considered a bible among authors; on the level of sheer craft, constructing sentences that so compel and engross they seem almost to breathe on the page, there’s no one better.

But the task of translating King’s horror to the big screen carries a distinct set of challenges, and more often than not something goes awry in the execution. Whether too much story is sacrificed in service of compressing long, meandering novels into two-hour films (Needful Things) or the adaptation falls prey to the opposite problem—all too much is stuffed in, leaving the end product waterlogged (Dreamcatcher)—it can be tricky to lift his voice off the page without losing it altogether.

HBO miniseries The Outsider (10 episodes, six of which were provided for review) is managing the feat admirably, at least in its first few episodes, by replicating the major beats of King’s story while remixing them into a tighter structure better befitting its prestige-TV pedigree.

In short order, we’re introduced to Detective Ralph Anderson (Ben Mendelsohn) and the horrifying, impossible case he must solve, involving the brutal rape and murder of an 11-year-old boy in a cozy Georgia suburb. What glimpses we get of the body are truly horrifying; the crime scene’s so frenzied that a detective wonders, maybe hopes, that it could have been perpetrated by a wild animal.

Fingerprints and CCTV footage soon point to a clear suspect: Terry Maitland (Jason Bateman, who also directed the first two episodes), a youth baseball coach who was spotted, covered in blood and acting suspiciously, by multiple eyewitnesses. It’s an open-and-shut case, Anderson thinks—until it’s not, with other forensic and video evidence placing Terry 70 miles away at the time of the murder. How could he have been in two places at once? Could the police have acted too hastily in hauling Terry off to jail at a Little League game, in full view of his family and neighbors? And what should be made of the hooded stranger hanging around town, silently observing the investigation?

Adapting what’s likely one of King’s less well-regarded tomes, The Outsider moves at a much faster clip than the novel, and its scripts (from crime novelist Richard Price, who developed the series) lean into the crime-solving elements of King’s story more than the supernatural ones, at least at first. Anderson, who’s grieving the loss of his son to cancer months earlier, feels like a holdover from HBO’s own True Detective in his terse, grounded approach to the case and tormented interior life, not to mention his gradual questioning of more paranormal explanations for the boy’s murder. (The show’s evocative cinematography and grim tone also plants it in that series’ aesthetic sandbox.) When Anderson’s joined by private investigator Holly Gibney (Cynthia Erivo), the two make for a fascinating study in two distinct visions of police work, one governed by logic and the other emotion, both wholly indispensable.

The Outsider understands at least one important key to King’s creative mastery, and it involves a focus on supernatural circumstances that reflect and amplify the terror of everyday traumas. The Shining was as much a portrait of alcoholism leading a man into ruin as it was a tale of ghosts goading him toward the same. Carrie didn’t introduce a teen with telekinesis so much as it provided an extraordinary outlet through which a sexually stifled, lonely young woman could externalize deep psychic pain.

In The Outsider, it’s grief that arises as a profoundly destructive force, and the way it snakes through this small town makes the series a sometimes stunningly grim affair. That hooded figure lingers like the grim reaper around crime scenes, eerily aware not only of what’s befallen the characters but what’s about to. The director’s camera, too, lurks down hallways and peers around trees, a hushed witness to the characters’ anguish. None of this makes the series an easy watch. But it’s constructed with such skill—and performed brilliantly, with Mendelsohn an early standout—that you’ll struggle to look away.

SKIP IT: ‘Lincoln Rhyme: Hunt for the Bone Collector’ (NBC)

Perhaps no TV template is as time-tested as the police detective drama, of which each subsequent TV season seems to offer a few variations but little deconstruction.

There will be dedicated cops, red herrings, promising leads, and a foot pursuit or three. At one point, one character will lecture another about how they’re “too close to the case” or taking their work home with them. There’s usually a “twist” in place of much other individually creative DNA—together, these two solve crimes, but: she’s dead (iZombie), he’s the devil (Lucifer), she’s got a medical condition (Unforgettable), he’s a criminal mastermind (The Blacklist), she’s an amnesiac (Blindspot), and he’s, well, he’s just kind of an asshole (Backstrom).

Lincoln Rhyme: Hunt for the Bone Collector—a show with a title I can only hope came after weeks of network executives banging their heads against a mahogany table in abject frustration—is the latest entry in this busy subgenre, and it cobbles together just about every cliché in the book without (at least in the pilot episode sent out for review) so much as gesturing in the direction of self-awareness or subversion.

At the series’ center is Lincoln Rhyme (Russell Hornsby), a brilliant New York City detective who’s in a full-body paralysis after a run-in with a particularly fiendish serial killer, the “Bone Collector” of the title. Three years later, he’s still laid up, though he’s retained his near-superhuman intelligence and curiously flawless grasp of city planning.

But when a young cop named Amelia (Arielle Kebbel) discovers a crime scene that bears the Bone Collector’s grisly signature, Lincoln’s drawn out of his forced retirement to track down his old nemesis. Amelia and Lincoln form an uneasy partnership. Together, these two solve crimes, but: she’s mysteriously traumatized, he’s paralyzed, and (most worrying of all) neither have much of a personality beyond those descriptors. Lincoln Rhyme is one of those series where characters make grave proclamations such as “whoever did this is playing a game, and they wanted me to have all the pieces,” only for other characters to nod sagely back at them and say something equally insane. It trots through the expected narrative beats, from explosions to false leads to detectives’ personal lives being thrust unexpectedly into the case—then ends on a note that suggests next week’s installment will offer little more than the same again.

Let’s be clear about something: Russell Hornsby is a massive talent. Across two decades of work, he’s never phoned in a performance, finding depth and sincerity in even smaller roles. I think often of his towering, Oscar-worthy performance in The Hate U Give as Maverick, a father and ex-con whose past, politics, and family life are thrown into conflict after his teenaged daughter (Amandla Stenberg) sees a police officer murder her friend. The gravitas and quiet fury with which he filled that role was a sight to behold. Even in smaller parts, in films like Fences and the Netflix series Seven Seconds, he’s excellent, unerring, locked single-mindedly into the truth and tragedy of his characters. Despite the hackneyed scripts he’s working with here, he’s also quite good as Lincoln, lending his certain authority to even the more ridiculous lines.

Though Lincoln Rhyme‘s shortcomings make it difficult to recommend out of the gate, the series has potential. The pilot sets up a cat-and-mouse game between Lincoln and the Bone Collector that, if maintained with focus and greater creativity, could be satisfying to watch play out at greater length. Should it continue, one imagines the show’s subtitles might change season-to-season, pulling from Deaver’s other novels. But even with the promise of a clear ending to his first case, Lincoln Rhyme‘s freshman hour doesn’t exactly get things off to a crackling start.

—Hulu will exclusively stream new FX series—and other updates from peak TV land
—How Neil Young’s eccentric online home was born
—Could Disney have more faith in X-Men spinoff The New Mutants than Fox did?
—What the 2020 Golden Globes tells us about this year’s Oscars
—Inside 1917: designing a World War I battlefield
Follow Fortune on Flipboard to stay up-to-date on the latest news and analysis.