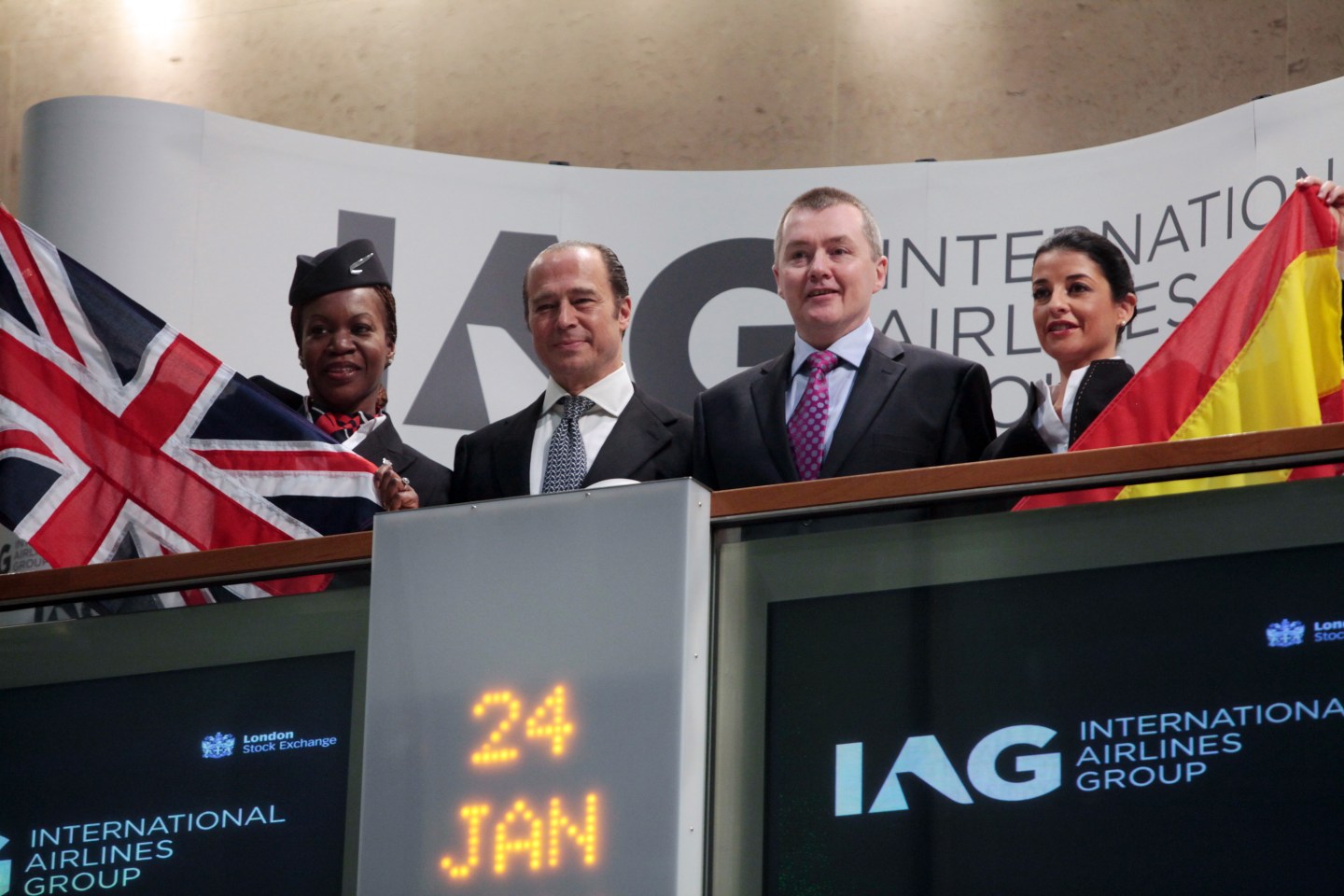 FILE: Antonio Vazquez, chairman of International Consolidated Airlines Group SA (IAG), center left, and Willie Walsh, chief executive officer of International Consolidated Airlines Group SA, center right, pose alongside airline staff at the London Stock Exchange, in London. U.K., on Monday, Jan. 24, 2011. IAG SA Chief Executive Officer Walsh is to retire after 15 years in charge of the airline group and predecessor British Airways, to be replaced by Luis Gallego, currently head of the groups Spanish Iberia arm. Walsh, 58, will stand down from the CEO role and the IAG board on March 26 and formally retire at the end of June, IAG said in a statement Thursday. Photographer: Jason Alden/Bloomberg via Getty Images
Jason Alden—Bloomberg via Getty Images

Willie Walsh, the pilot who built European airline giant IAG SA through a series of acquisitions, will retire, to be replaced by Luis Gallego, head of Spanish arm Iberia.

Walsh, 58, will stand down from the CEO role and the board in March and formally retire at the end of June, the company said Thursday. He led British Airways, and successor IAG, for 15 years.

At British Airways, Walsh faced down unions to cut costs and boost earnings before leading the purchase of Iberia in 2011, establishing IAG to take on Air France-KLM and Deutsche Lufthansa AG, which had already grown through acquisitions.

IAG added Aer Lingus and no-frills units Vueling and Level, consolidating its position as one of Europe’s most profitable carriers despite competition from low-cost rivals like Norwegian Air Shuttle ASA. He agreed last year to buy Air Europa for 1 billion euros ($1.1 billion), boosting Madrid’s status as a top hub and taking IAG’s fleet beyond 600 planes.

“Willie has made IAG the success it is today, undoubtedly one of the greatest airline groups in the world,” said John Strickland, director of JLS Consulting in London. Gallego, 51, is “a solid choice” as his successor, having transformed Iberia from a carrier beset with labor strife to one of Europe’s top operators.

The group’s chairman, Antonio Vazquez, said Walsh has been “the main driver of this unique idea that is IAG,” a reference to a corporate structure designed to foster takeovers under a central holding company, avoiding the national clashes that are often a barrier to airline consolidation.

The decision to appoint Gallego means British Airways chief Alex Cruz has been overlooked for the top job. Cruz took over at the U.K. carrier in 2016, having previously been CEO at Vueling.

Gallego held various positions at Spanish airlines and entered the IAG fold via Clickair, which he helped found and which was acquired by Vueling, where he became chief operating officer. He later led Iberia’s regional arm before becoming its CEO in 2013. A new head for Iberia will be announced in due course, the company said.

—7 M&As that defined a decade of dealmaking and reshaped the economy
—3 charts that prove patent power is tilting in Asia’s favor
—Rwanda is bringing tech buzz to Africa
—These 10 journalists deserve justice in 2020
—2020 Crystal Ball: Predictions for the economy, politics, technology, etc.
Catch up with Data Sheet, Fortune’s daily digest on the business of tech.