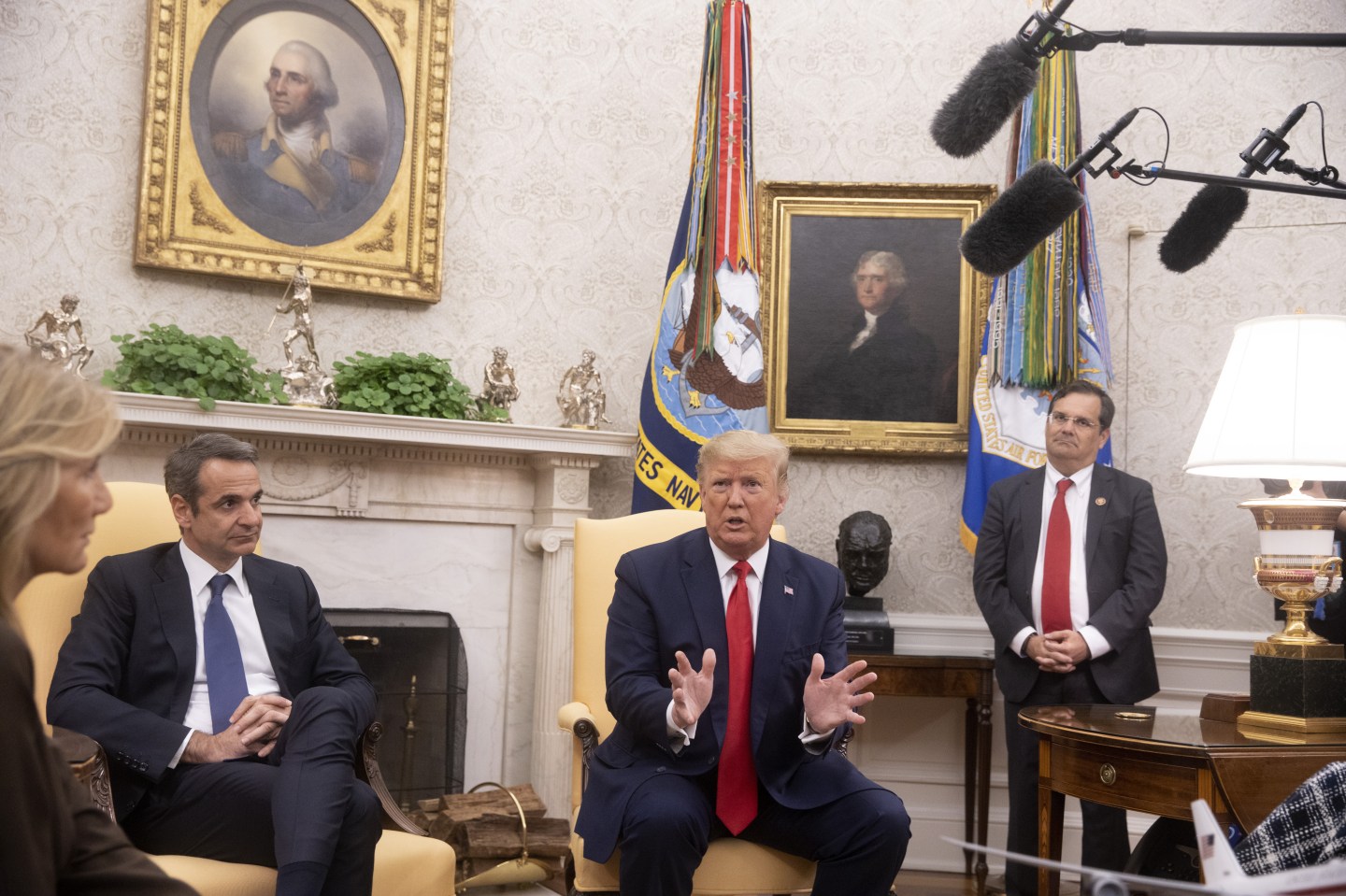 President Donald Trump on Tuesday backed away from his threats to target Iranian cultural sites if Iran retaliates against the U.S. for killing one of its top generals.

After first tweeting the threat and later reiterating it to reporters as he flew back to Washington over the weekend, Trump retreated Tuesday, saying, “I like to obey the law.”

But he still sounded offended by the idea that such sites would be off limits during armed conflict.

“Think of it,” Trump said during an Oval Office appearance. “They kill our people. They blow up our people. And then we have to be very gentle with their cultural institutions?”

Trump added: “But I’m OK with it. It’s OK with me.” He then issued yet another stern warning to Iran to stand down, saying, “If Iran does anything they shouldn’t be doing, they are going to be suffering the consequences, and very strongly.”

On Monday, Defense Secretary Mike Esper had distanced the Pentagon from Trump’s threats to bomb Iranian cultural sites despite international prohibitions on such activity.

It all began over the weekend when Trump tweeted Saturday that if Iran attacked any American assets to avenge the killing of Iranian Gen. Qassem Soleimani, the U.S. had 52 targets across the Islamic Republic that “WILL BE HIT VERY FAST AND VERY HARD.”

He added that some are “important to Iran & Iranian culture.”

Anger spread quickly across Iran, and Trump repeated the threat to reporters traveling with him as he flew back to Washington on Sunday after spending two weeks at his Florida resort.

Tensions between the U.S. and Iran escalated sharply after Trump ordered a drone strike in Iraq that killed Soleimani, head of Iran’s powerful Quds Force. The U.S. has said Soleimani was killed because he was making plans to attack American diplomats and service members in the Middle East.

Targeting cultural sites is a war crime under the 1954 Hague Convention for their protection. Separately, in 2017, the U.N. Security Council unanimously passed a resolution condemning the destruction of heritage sites. Attacks by the Islamic State group and other armed factions in Syria and Iraq prompted that vote.

UNESCO, the United Nations’ cultural agency, has called on governments to remember that cultural sites are not targets.

Trump’s tweet also caused concern in Washington. One U.S. national security official said the threat against Iranian cultural sites had caught many in his administration off-guard and prompted calls for others in his government, including Secretary of State Mike Pompeo, to clarify the matter. The official, who was not authorized to speak publicly to the issue, called such a clarification necessary to affirm that the U.S. military would not intentionally commit war crimes.

When asked about the president’s tweet, Pompeo said Sunday that the U.S. will “behave” within the law. Questioned about the matter again Tuesday, Pompeo said every action taken by the U.S. “will be consistent with the international rule of law,” though he did not specifically rule out Iranian cultural sites.

He then blamed Iran for damaging its culture.

Iran is home to two dozen UNESCO World Heritage Sites, including Persepolis, with its ancient ruins that date to 518 B.C.; the 17th century grand mosque of Isfahan, located in a teeming bazaar; and the Golestan Palace in the heart of Tehran, where the last shah to rule Iran, Mohammad Reza Pahlavi, was crowned in 1967.

—Donald Trump and the power of incumbency
—How the UN’s climate efforts could change the business world
—The wealthiest members of Congress—and how they made their millions
—USPS could privatize as early as next year
—2020 Crystal Ball: Predictions for the economy, politics, technology, and more
Get up to speed on your morning commute with Fortune’s CEO Daily newsletter.