U.S. Builds Up Troops In the Middle East As Funerals Begin In Iraq 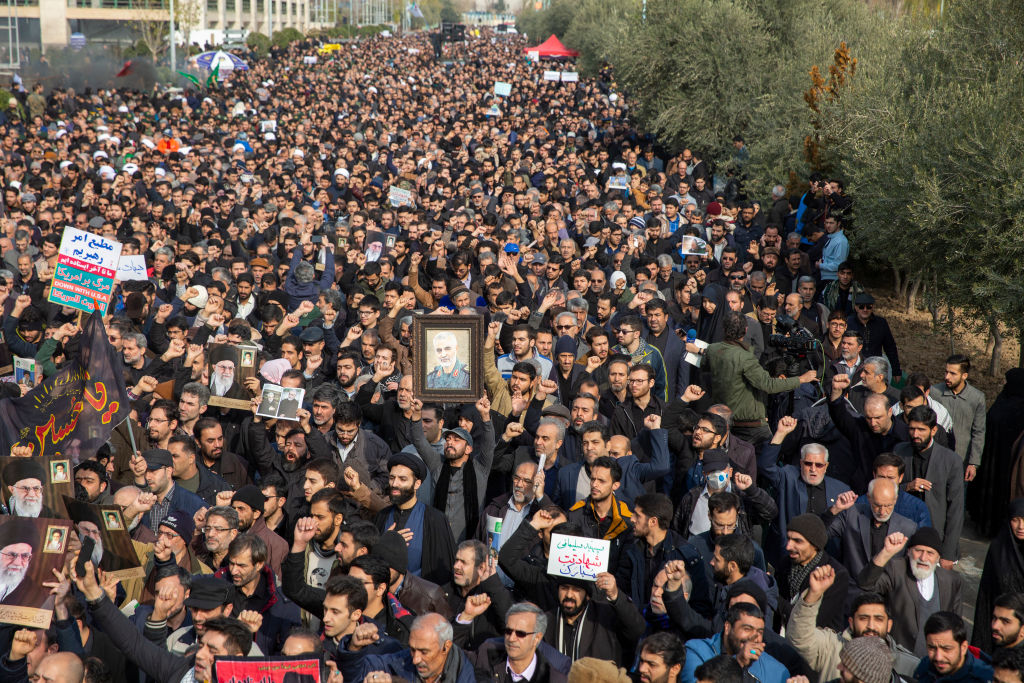 TEHRAN, IRAN - JANUARY 03: Protesters hold up photographs as people demonstrate after the U.S. airstrike in Iraq that killed Iranian Revolutionary Guard Gen. Qasem Soleimani on January 3, 2020 in Tehran, Iran. Iran has vowed 'harsh retaliation' for the U.S. airstrike near Baghdad's airport that killed Tehran's top general as tensions soared in the wake of the targeted killing. (Photo by Majid Saeedi/Getty Images)
Photo by Majid Saeedi—Getty Images

The U.S. is sending more troops to the Middle East after an American strike in Iraq killed one of Iran’s most powerful generals.

About 2,800 troops from the Army’s 82nd Airborne division will join roughly 700 troops dispatched to Kuwait earlier this week as part of the division’s rapid-reaction “ready battalion,” according to two U.S. officials who asked not to be identified discussing the deployment. The U.S. already had about 60,000 personnel in the region.

The killing sent global markets reeling. Oil futures in London and New York at one point surged by more than 4%, gold hit the highest in four months and 10-year Treasury yields headed for the biggest drop in three weeks. The S&P 500 Index fell less than 1%, paring losses that were poised to be the biggest since October as some stock investors took the opportunity to hunt for bargains.

“We took action last night to stop a war,” Trump said. “We did not take action to start a war.”

After the operation, Secretary of State Michael Pompeo called counterparts and officials in France, the U.K., China, Russia, Saudi Arabia, Afghanistan and Pakistan, reiterating his message of de-escalation. The U.S. State Department has issued a directive urging American citizens to leave Iraq immediately due to the tensions.

“We don’t seek war with Iran,” Pompeo said in an interview on Fox Friday morning. “But we, at the same time, are not going to stand by and watch the Iranians escalate and continue to put American lives at risk without responding in a way that disrupts, defends, deters and creates an opportunity to de-escalate the situation.”

The assault in Baghdad marked the latest in a series of violent episodes that have strained already hostile relations between Iran and the U.S. Last week, an American contractor was killed in a rocket attack on an Iraqi military base in Kirkuk. That led to a rare, direct American assault on an Iran-backed militia in Iraq and then came the attack on the U.S. embassy in Baghdad.

National Security Adviser Robert O’Brien said the administration would provide Congress retroactive notification of the Soleimani strike as well as classified briefings next week, when lawmakers return from a holiday break. He declined to describe the intelligence that he said indicated the Iranian general was planning attacks against Americans, calling it “extraordinarily sensitive” in a briefing for reporters.

General Soleimani, who led proxy militias that extended Iran’s power across the Middle East, was killed in a car late Thursday by a Reaper drone capable of firing laser-guided weapons as he was leaving an airport access road, a U.S. official said. The strike also killed the deputy commander of an Iraqi militia group, the shiite-dominated Popular Mobilization Forces, who was with Soleimani.

Funerals of those killed got under way in Baghdad Saturday morning, with thousands attending carrying militia banners. Separately, the PMF denied overnight reports that an attack on cars carrying some of its members north of Baghdad was another American airstrike.

The death of Soleimani, who led the Revolutionary Guards’ Quds force, fueled concerns the U.S. and Iran may be drawn into an armed confrontation, pulling in other countries. The pressures, which have been building for months, have been complicated by widespread protests in Iraq and Iran.

“A severe retaliation awaits murderers who have the blood of Soleimani and that of other martyrs on their wicked hands from last night’s incident,” Khamenei said in a statement.

The Iranian leadership is signaling it may target U.S. military installations and bases in the Middle East and mobilize its network of militias across the region. One official told the state broadcaster that some 36 U.S. military bases and facilities are within reach of Iran’s defense forces, with the closest being in Bahrain. A spokesman for the Revolutionary Guards said the assassination marked the start of a “new phase” in the activities of Iran’s “resistance forces” throughout the region.

A September attack on Saudi oil facilities—for which Iranian-backed rebels in Yemen claimed responsibility—highlighted the potential impact of Tehran’s response.

Trump’s European allies urged the president to find a way to ease the tensions with Tehran and warned of the risks that a cycle of retaliations would spiral out of control.

French President Emmanuel Macron is speaking to his counterparts in the Middle East in an effort to prevent the situation spiraling out of control, European Affairs Minister Amelie de Montchalin said on RTL radio. “This is what we feared,” she said. “It’s a continuation of the escalation that’s been happening over recent months.”

German Chancellor Angela Merkel’s spokesman said the U.S. had been provoked by Iran and urged all sides to reduce the tensions.

Iraqi Prime Minister Adil Abdul-Mahdi’s office said the attack was an “aggression against the Iraqi state, government and people” and called for an extraordinary session of parliament.

The Iranian regime will be under “strong pressure” to strike back, said Paul Pillar, a former U.S. Central Intelligence Agency officer and a non-resident senior fellow at Georgetown University in Washington. “Many Iranians will regard this event the same way Americans would regard, say, the assassination of one of the best known and most admired U.S. military leaders.”

Iraqi forces enhanced security around the U.S. embassy in Baghdad after the airstrike, Iraq’s al-Sumaria news reported, citing a security official. Iran summoned the Swiss envoy in Tehran, who helps look after U.S. interests in the country, in response to the killing, according to Foreign Ministry spokesman Abbas Mousavi.

Soleimani, a veteran of the Iran-Iraq war, was a household name in Iran where he’s celebrated for helping to defeat Islamic State in Iraq and Syria and countering U.S. influence.

He had been sanctioned by the U.S. since 2007 and last May Washington designated the Revolutionary Guards Corps in its entirety a foreign terrorist organization, the first time the label has been applied to an official state institution or a country’s security forces.

National Security Adviser O’Brien cautioned Iran against retaliation. “If they choose to escalate, that would be a very poor decision for the Iranian regime,” he said.

“The other alternative is to sit down with the United States, give up its nuclear program, stop its regional escapades and proxy wars,” he added, “and behave like a normal nation.”

—7 M&As that defined a decade of dealmaking and reshaped the economy
—3 charts that prove patent power is tilting in Asia’s favor
—Rwanda is bringing tech buzz to Africa
—The Starbucks of China is paving a new future for retail. Will it pay off?
—2020 Crystal Ball: Predictions for the economy, politics, technology, etc.
Catch up with Data Sheet, Fortune’s daily digest on the business of tech.