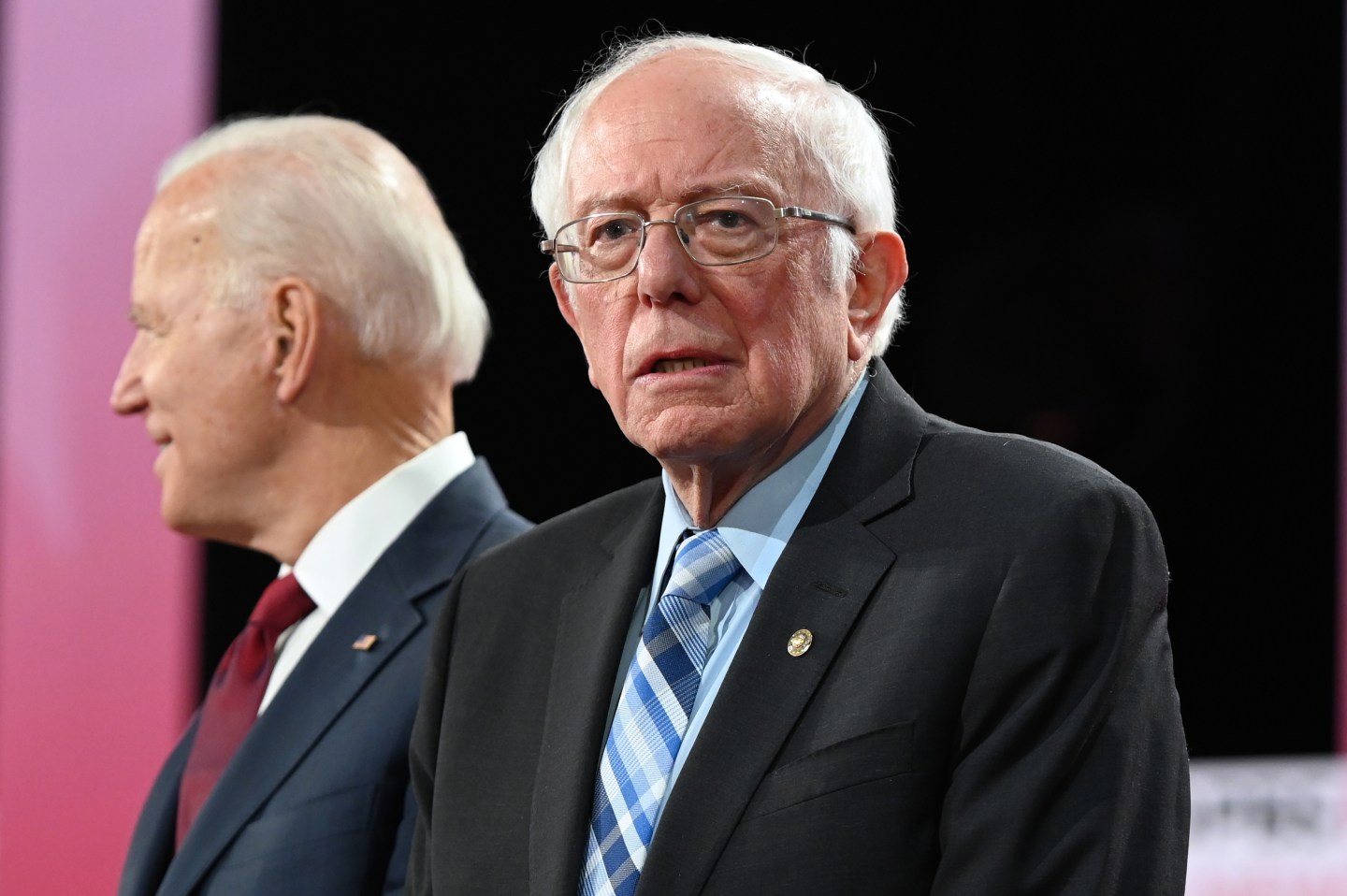 The statements fell neatly into two camps: Those who strongly condemned war, and those who gave more nuanced reactions. The latter group began by condemning Soleimani for his actions, then issued a warning that the Trump administration isn’t equipped to handle the situation at hand. Some of the language candidates used was strikingly similar.

Candidates like Senator Bernie Sanders, however, responded to the escalation in Iran, which experts say will lead to retaliation and possibly warfare, by emphasizing their anti-interventionist stance.

Part of President Donald Trump’s appeal to voters in 2016 were promises to bring American troops (currently fighting an 18-year war in the Middle East) back home and his framing of opponent Hillary Clinton as a war hawk. “You’re going to end up in World War Three over Syria if we listen to Hillary Clinton,” he said during a 2016 press conference.

Those promises, now fraying, are still appealing to voters, and Sanders could potentially appeal to a class of American who feels betrayed by the president.

The majority of Americans disapprove of the President’s handling of foreign policy and also disapprove of war with Iran. A June Politico poll found very little support for retaliatory action in Iran after the country struck down a U.S. drone aircraft, and a February study by the Eurasia Group found that the majority of Americans wanted to end interventionary policy in the Middle East, even going so far as to say they didn’t want to intervene in Iran if the country resumed its nuclear weapons program.

Still, the majority of 2020 candidates opted for careful words, calling for a more careful look at the situation and the intervention of Congress instead of a complete end to the ongoing conflict in Iran and repeating Republican rationalizations for the death of Soleimani.

Former Vice President Joe Biden said the president’s actions were akin to tossing “a stick of dynamite into a tinderbox,” but also hedged his rhetoric by acknowledging that “no American will mourn Qassem Soleimani’s passing,” and “he deserved to be brought to justice for his crimes against American troops and thousands of innocents throughout the region.”

Biden acknowledged that “we could be on the brink of a major conflict across the Middle East” and said he hoped the Trump administration had “thought through the second-and third-order consequences of the path they had chosen,” though he didn’t believe they had.

Later in the day, Biden reiterated at a campaign event that he believed the prospects of direct conflict with Iran was “greater than it has ever been.” but said “the question is, do Donald Trump and his administration have a strategy for what comes next?”

Sen. Elizabeth Warren (D-Mass.) soon released her own statement, echoing that Soleimani “was a murderer, responsible for the deaths of thousands, including hundreds of Americans.” She warned that his killing could lead to a “costly war” that America should avoid.

Warren, who voted twice to increase the military budget under President Trump and voted for sanctions on Iran, later opted for stronger words.

After receiving criticism from the far-left, she took a different stance on her Twitter. “Donald Trump ripped up an Iran nuclear deal that was working. He’s repeatedly escalated tensions. Now he’s assassinated a senior foreign military official,” she wrote, striking a markedly different tone from her earlier tweet about Soleimani. “He’s been marching toward war with Iran since his first days in office—but the American people won’t stand for it…No more Middle East wars.”

Similarly, former New York City Mayor Mike Bloomberg called Soleimani a “murderer” with “the blood of Americans on his hands” and said that “we can only hope that the president has carefully thought through the national security of his attack for our country and the grave risks involved.” Sen. Amy Klobuchar (D-Minn.) similarly dismissed Soleimani as responsible for “destabilizing actions” in the Middle East but said that the “Administration needs to fully consult with Congress on its decision-making, response plans and strategy for preventing a wider conflict.”

South Bend, Ind., Mayor Pete Buttigieg, who served as a Navy intelligence officer in Afghanistan, also fell into a similar pattern. The presidential candidate waited until early Friday afternoon to respond to the incident, causing some to wonder if he was planning a unique strategy with his team. His response, however, fell largely in line with the talking points of the Democratic establishment.

“The top priority of a Commander-in-Chief must be to protect Americans and our national security interests,” he wrote in a statement. “There is no question that Qassim Suleimani was a threat to that safety and security, and that he masterminded threats and attacks on Americans and our allies.”

But Buttigieg added that the president’s choices appeared to be too rash.

“Before engaging in military action that could destabilize an entire region, we must take a strategic, deliberate approach that includes consultation with Congress, our allies, and stakeholders in the Middle East,” he explained.

On the other side of the 2020 divide were candidates like Sen. Bernie Sanders (I-Vt.), Rep. Tulsi Gabbard (D-Hawaii), who also served in Iraq, and entrepreneur Andrew Yang.

Sanders, who unlike Biden did not vote for the use of military force in Iraq in 2002, tweeted, made videos, and spoke out repeatedly against any war in the Middle East.

“Trump’s dangerous escalation brings us closer to another disastrous war in the Middle East that could cost countless lives and trillions more dollars,” said Sanders before touting his long anti-war history. “Trump promised to end endless wars, but this action puts us on the path to another one.”

Later, Sanders added, “We must do more than just stop war with Iran. We must firmly commit to ending U.S. military presence in the Middle East in an orderly manner. We must end our involvement in the Saudi-led intervention in Yemen. We must bring our troops home from Afghanistan.”

“As the former chair of the Senate Committee on Veterans Affairs, I have seen up close the pain, death, and despair caused by war,” said Sanders of the possibility of war on Friday. “And I know that it is rarely the children of the billionaire class who face the agony of reckless foreign policy.”

Sanders’ messaging comes just days after the candidate, who is polling second nationwide, announced a record fourth-quarter fundraising haul of
$34.5 million, $10 million more than his closest Democratic competitor. The campaign said it brought in a 2019 total of $96 million from more than 5 million contributions, with an average donation of about $18.

Sanders took to the press to publicly attack his closest national competitor, Biden, for his Middle East policy just days before the airstrike was announced.

—How the UN’s climate efforts could change the business world
—The wealthiest members of Congress—and how they made their millions
—What is election hacking—and can it change who wins?
—USPS could privatize as early as next year
—2020 Crystal Ball: Predictions for the economy, politics, technology, and more