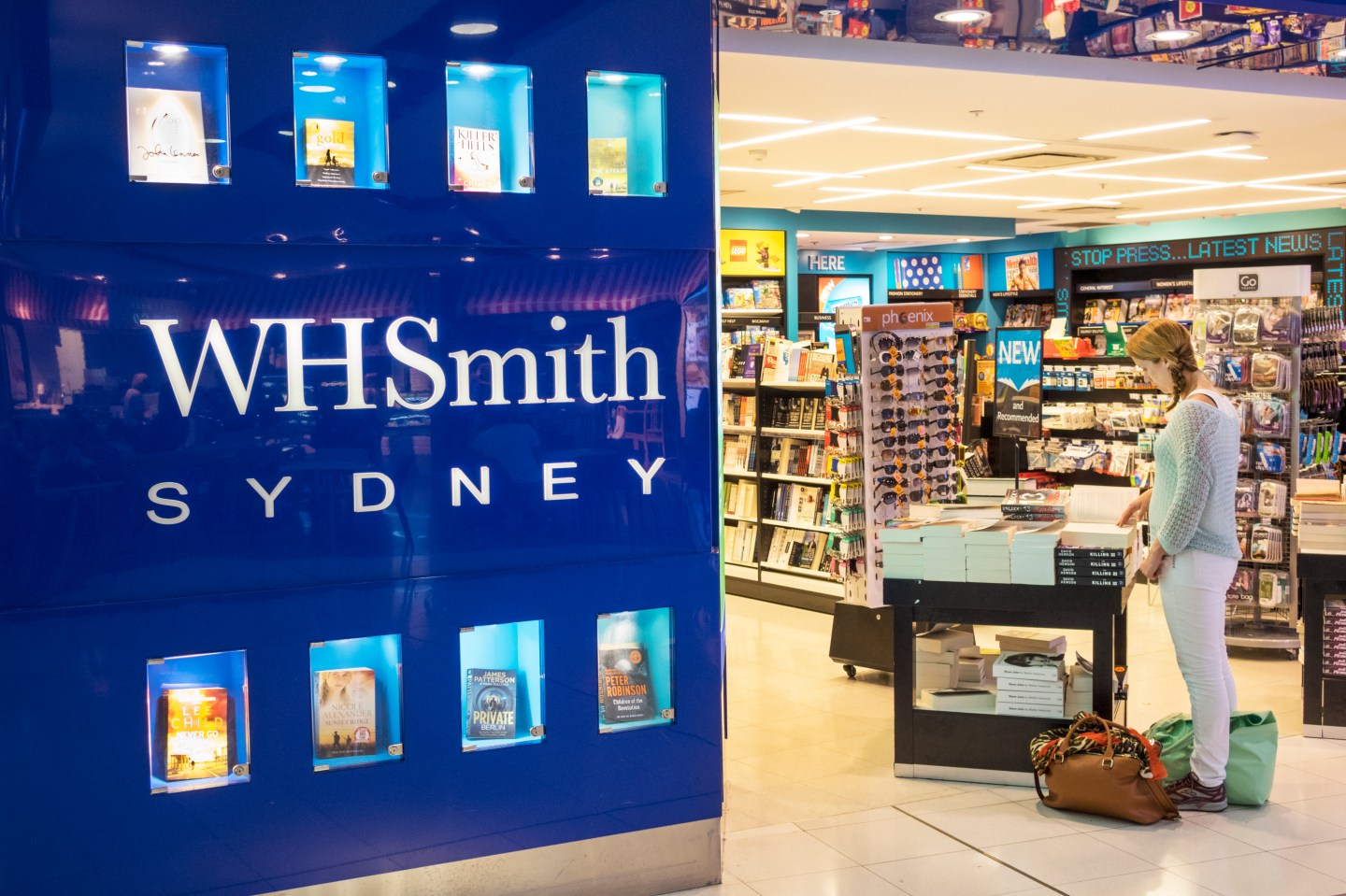 Pheww, you’ve made it through the airport security checkpoint in one piece, and have arrived at your gate with time to spare. A trip to the shop beckons for the essentials—a $4 bottle of water, candy bar and a magazine. Uggh, you forgot your headphones. Again. Oh well, here’s a pair and, hey, maybe this: a “Santa Please Stop Here” 500-piece jigsaw puzzle.

In much of Europe, parts of Asia, Australia (and soon, parts of the U.S.), that quick but pricy airport splurge will likely happen at a WH Smith, the British high street retailer that harkens back to the 1790s when Henry Walton Smith and his wife Anna started a news vending operation in London.

The news business isn’t the retail racket it was once was, but that hasn’t stopped WH Smith from growing into a global giant with more than 1,500 shops, including a healthy business at train stations and airports across 30 countries outside the U.K.

The travel sector has become WH Smith’s bread and butter as foot traffic and sales decline at its high street shops. Now it wants the jam, too. With airports turning into malls, and air travel booming, this pre-Victorian age retailer is profiting from being the last —and often only—shopping option on your way out of town.

WH Smith’s retail strategy isn’t just that it’s exploiting a particularly captive customer segment—though that doesn’t hurt. It stocks its shelves with high-margin convenience items, plus books, magazines and increasingly digital accessories in one of the most unique retail markets on the planet. Amazon, so far, hasn’t yet made it beyond the security checkpoint to encroach on its turf.

“The company has been able to choose the right product mix to get people what they want while they are on the move,” said Andy Brian, a partner who heads up the commercial contracts team and retail sector practice at Gordons LLP in Leeds, U.K. “When you look at their financials, the company’s travel retail numbers appear to be going in the right direction.”

The markets have certainly taken notice. The share price of WH Smith is up nearly 50% year-to-date—not bad for a high street brand that was named the U.K.’s worst retailer in a recent consumer survey and gets mocked on Twitter for being an all too often uncool shopping experience.

WH Smith’s growing travel business—with help from its recent InMotion and Marshall Retail Group (MRG) acquisitions, which stretched its footprint in the U.S. and widened its portfolio into headphones, earbuds, portable speakers and other on-the-go devices—generated two thirds of the group’s £177 million ($231 million) operating profit, according to year-end financial numbers released in October. Annual travel business sales rose 22 percent to £817 million ($1.07 billion) in fiscal 2019, and profit for the segment increased 14% to £117 million.

A spokesperson declined to comment on the company’s future plans. Some analysts, though, think its recent M&A activity will help it grow further in the new year.

“The dream is that the combination of WH Smith’s merchandising skills, InMotion’s service culture and MRG’s local knowledge will combine to create a compelling pitchbook to take to U.S. airports,” wrote Peel Hunt analysts Jonathan Pritchard and John Stevenson in their December note. “Both of the acquired businesses are strong, with good growth profiles in their own rights, and in combination with WH Smith’s skillset, will make a strong force in U.S. airport retailing, looking to shake up the effective duopoly enjoyed by Hudson and Paradies Lagardere.”

The same analysts see operating profits increasingly coming from these growing business lines. By 2022, the U.K. high street business will contribute just 25% of EBITDA, compared to a 48% contribution back in 2013, the analysts forecast.

A decade or so ago, people traveled once or twice a year for their big two-week vacations. Today, few would think twice about taking to the air for a long-weekend excursion. The more we frequent the local airport the more it impacts our airport buying habits.

“The average low-cost flight today costs 10 to 20 euros. Will people spend 80 euros on perfume every time they go to the airport? Probably not,” said Christopher van Rÿswÿck, managing director at Pragma Consulting, a London-based commercial advisor for investors and operators in airports and retail property. He expects food, beverage, convenience and books items to continue to fare better with passengers.

Passengers on short-haul flights, he estimates, average about 50-60 minutes of airport-wait time, while those on long-haul flights typically have 70-80 minutes. However, passengers are not as captive as they once were.

“Nowadays, people have Netflix, Spotify, and any number of other distractions that can steer them away from the main commercial spaces in airports,” noted van Rÿswÿck. “Retailers will need to make airport retail more of an experience if they want to win passengers’ attention.”

The market is enormous. Airports Council International (ACI) expects airport passenger traffic worldwide to grow to 20.9 billion by 2040, up from 8.8 billion in 2018.

On-demand delivery companies Airport Sherpa, AtYourGate, Deliveroo and others are already positioning themselves in airports worldwide, figuring out how to bring food and merchandise to your gate while you charge your phone. In the near future, Amazon, too, may extend its tentacles down towards the gangway. Fortune reported last December that the behemoth was considering rolling out its cashier-free Amazon Go stores in airports.

Van Rÿswÿck, for one, thinks it may take a while for Amazon and others to develop the cost-effective, trustworthy logistics models required to serve airport consumers.

In the meantime, WH Smith will be happy to sell you earbuds, overpriced Twix bars and dear vitamin-infused water.

—7 companies founded in the last 10 years that you now can’t live without
—The world’s fourth-largest economy is going cashless
—2020 Crystal Ball: Predictions for the economy, politics, technology, etc.
—Can tech save the air travel industry from its delay problem?
—How to make sure your in-flight Wi-Fi isn’t terrible