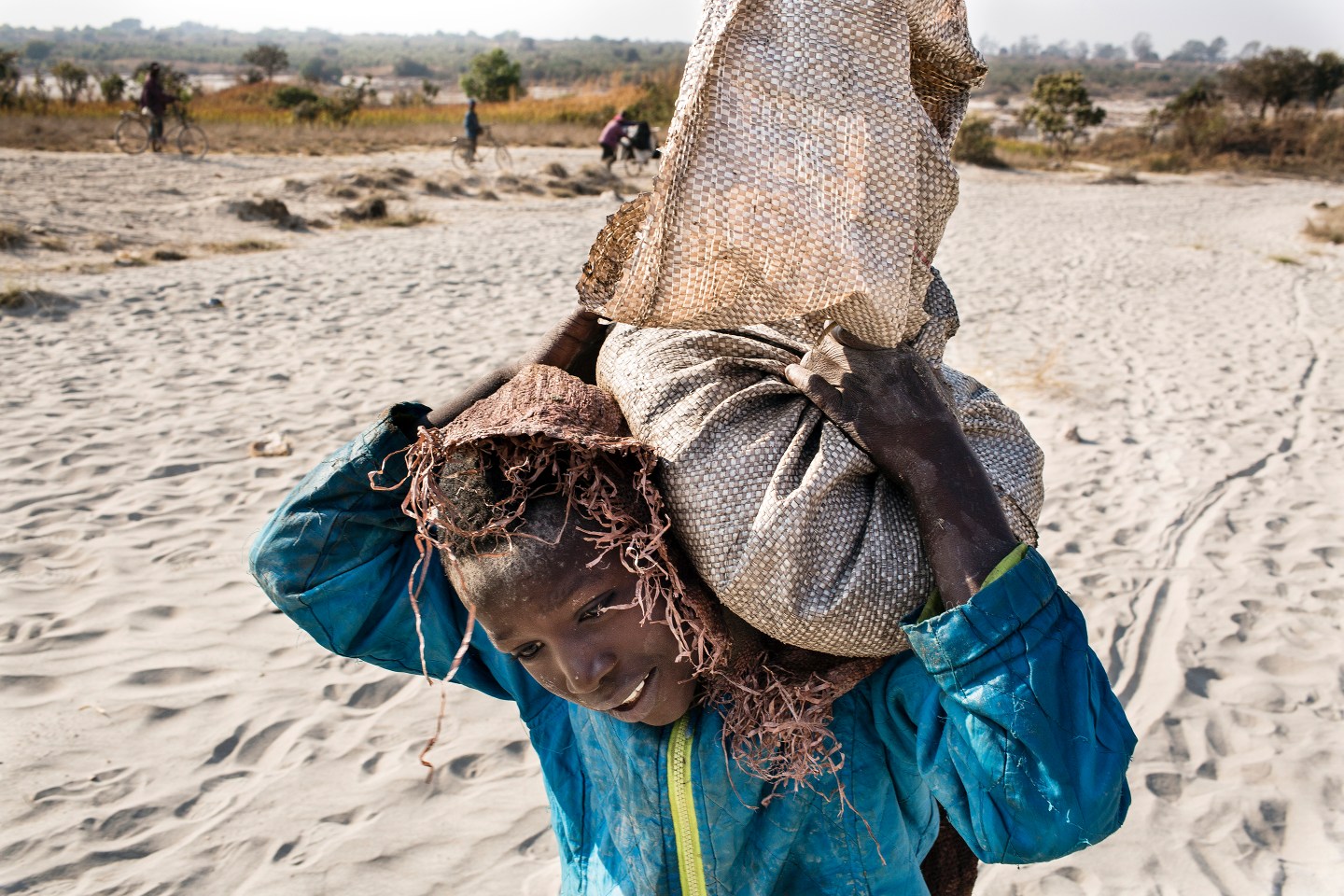 KOLWEZI, DRC: Daniel (11) carries a bag of cobalt on his back. He works in a mine ferrying sacks of cobalt to a depot. DRC.09.01.18 Cobalt is a vital mineral needed for the production of rechargeable batteries. Two thirds of the world supply is located in southern Congo where men, women and children all work. Efforts are being made to stop child labor in the cobalt mines, but they have not been successful. Batteries needed for phones, computers and electric cars have pushed the global demand for Cobalt through the roof. Chinese companies and middlemen have the strongest hold on the market. Tech companies like Apple, Microsoft and Tesla are trying to find a way to access Congolese cobalt in a more humane way with proper accountability. Photo by Sebastian Meyer
Photograph by Sebastian Meyer for Fortune

In the first case of its kind against U.S. tech giants, a human rights legal organization, representing unnamed victims, filed a civil lawsuit on Monday against Apple, Google’s parent company Alphabet, Microsoft, Tesla, and Dell in a federal court in Washington, D.C., alleging that their outsized profits are being generated off the labors of children in the Democratic Republic of Congo, or DRC, who toil in what the complaint describes as “Stone Age conditions,” sometimes paying with their lives.

Fortune ventured into the cobalt mines last year to investigate the methods used to dig the mineral found lithium-ion batteries, essential for every smartphone, electric vehicle, and a myriad other devices. Children were working 12-hour days, some for just $2 a day, digging and hauling sacks of cobalt-rich rocks, in a chaotic scramble for the hugely valuable commodity. Nearly two-thirds the world’s current cobalt supply originates from a sliver of southern DRC, a country beset with deep corruption and crippling poverty. “When kids are not in school, they all go work in the mines,” a resident in one village said. “Even from 10 years old.”

Given the dire penury, that reality continues even at the risk of children dying.

The lawsuit, brought by International Rights Advocates, a non-profit human rights legal advocacy group in Washington, is on behalf of 14 unnamed plaintiffs, including the families of six child miners killed on the job; the others suffered severe injuries. One, for example, is a boy who was paralyzed from the chest down down at age 15, after falling down a steep tunnel of a mine, where he was hauling cobalt for less than $1 a day. The mine was operated by a mining company owned by the Swiss-based commodities giant Glencore, according to the complaint.

“Boys are working under Stone Age conditions for paltry wages and at immense personal risk to provide cobalt that is essential to the so-called ‘high-tech’ sector,” the legal complaint says. “Put simply, the hundreds of billions of dollars generated by the defendants each year would not be possible without cobalt mined in the DRC.”

Industry statistics make that clear. Tech giants have vowed for years to rid their supply chains of unregulated cobalt-mining operations in the DRC. Deeply concerned that consumers will eschew their products, all five companies have railed against child labor; in June last year,  Elon Musk tweeted that the next generation of Tesla electric vehicles would have no cobalt at all.

But as the big automakers ramp up their electrification plans, the cobalt market is booming—a fact that has helped push cobalt mining in the DRC to more dangerous, frenzied levels, according to this week’s lawsuit against the tech giants. The battery in an average electric vehicle requires about 18 pounds of cobalt—about 1,000 times the quarter-ounce found in a typical smartphone. Global demand for the mineral is expected to reach about 120,000 metric tons a year by next year, a 30% increase from 2016, and it could reach about 357,000 tons by 2030, according to the London-based cobalt-trading company Darton Commodities.

Tech companies say they have recently cracked down on “artisanal” sources in their supply chains, and that they have blocked suppliers that appear to buy cobalt from irregular, artisanal mines, including those using children; about one-third of the DRC’s cobalt is believed to be mined informally. Apple has stated that it has tracked every smelter providing cobalt and regularly submits to third-party audits—a claim that Amnesty International appeared to accept in 2017, when it ranked the world’s first trillion-dollar company as the industry leader in cleaning up its cobalt supplies.

Dell’s spokeswoman Lauren Lee told Fortune on Monday that the company was investigating the allegations in the lawsuit, and that it was committed to workers’ human rights. “We have never knowingly sourced operations using any form of involuntary labor, fraudulent recruiting practices, or child labor,” Lee said in an email. “We work with suppliers to manage their sourcing programs responsibly.”

Fortune’s requests for comments from the other four companies named in the lawsuit went unanswered.

Cleaning up supply chains might be far more complicated than tech companies have claimed or perhaps assumed. Last month, the Organization for Economic Development and Cooperation in Paris, which tracks global cobalt operations, reported far different results and the perception among tech companies: many of the world’s biggest cobalt producers use some artisanal miners’ cobalt and mix the product in with theirs. The report said artisanal mining is increasingly mingled with more organized, industrial operations, and that corruption, as well as child miners, is rife in the industry.

“The report shows it is about more than child labor,” Tyler Gillard, project head of the OECD’s Center for Responsible Business Conduct, said when the report was released. “The challenges are enormous.”

So, too, were the challenges in preparing the lawsuit filed on Monday. Child cobalt miners and the relatives of those killed on the job gave secret testimonies in a secure location in the DRC over a period of three weeks, out of sight of the local authorities, police, and mine managers, all of whom could well punish those speaking out.

“We have an NGO on the ground, which is unnamed because of fear of retaliation from the companies and the government,” attorney Terrence Collingsworth, who heads International Rights Advocates in Washington, told Fortune. “They brought the kids to me in a secure location.”

He said he felt confident that he had a “winnable case” against the tech companies.

“This is about the contrast between the richest of the rich corporations, and the gadgetry they are making, and the kids working like they are in the Stone Age,” he says. “They have the resources and the power to fix this.”

—2020 Crystal Ball: Predictions for the economy, politics, technology, etc.
—5 of the best last-minute gift ideas you can get before Christmas
—A masterclass in negotiating your salary
—A roundtable of investing experts share their best advice for 2020
—I worked at McKinsey. Here’s how the firm needs to change
Subscribe to Fortune’s Eye on A.I. newsletter, where artificial intelligence meets industry.