The Case of Liu vs. Liu 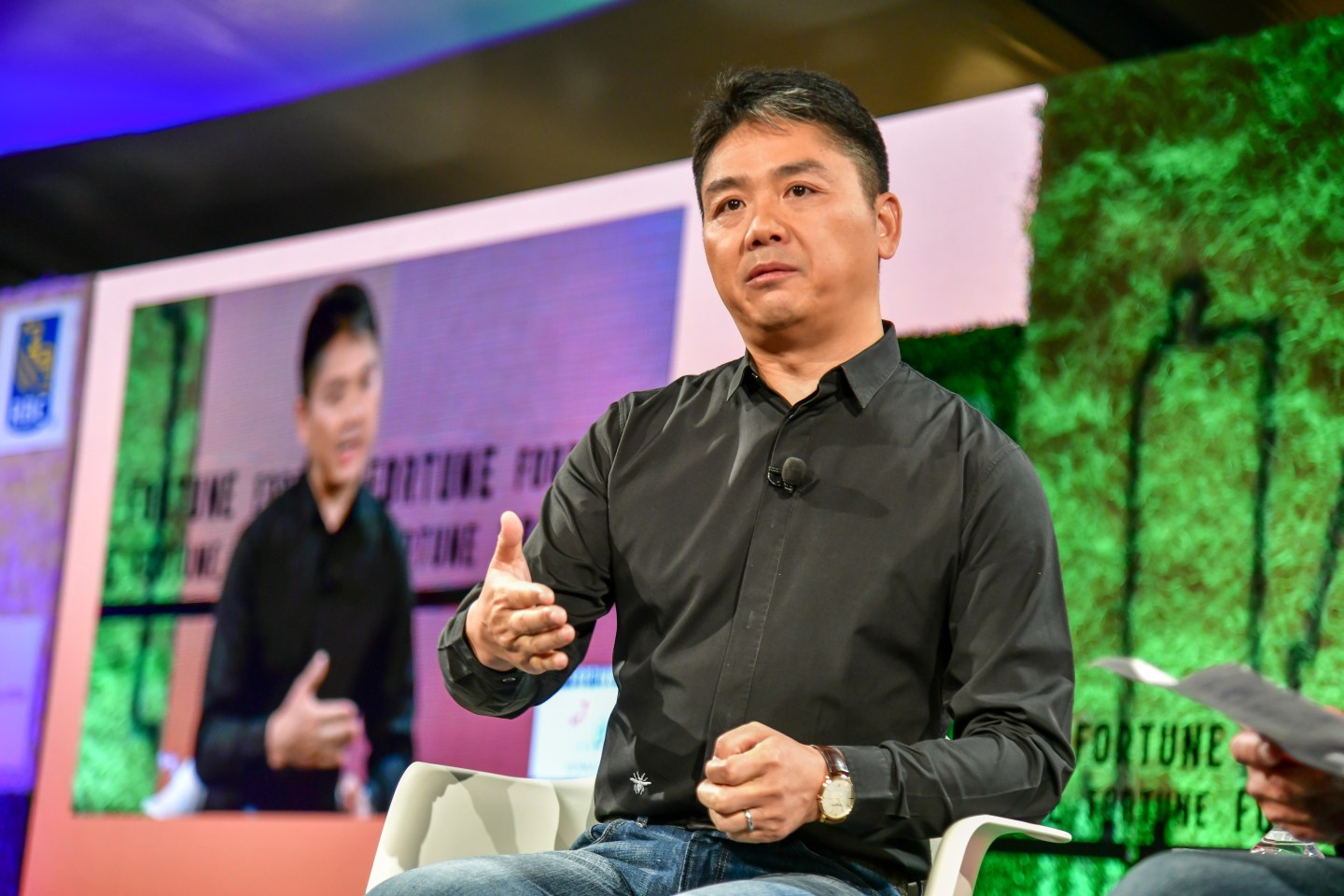 009 Monday, July 16th, 2018 Fortune Brainstorm Tech 2:50 PM CHINA’S BIG E-COMMERCE BET Anyone can put a product on a shelf. Not everyone can offer people a soup-to-nuts solution to sell their wares. The founder of China’s biggest retailer shares his thoughts about logistics, markets, and the rise of “retail as a service.” Speaker: Richard Liu, CEO, JD.com Interviewer: Adam Lashinsky, Fortune Photograph by Stuart Isett/Fortune
Stuart Isett—Fortune Brainstorm Tech

Friday’s New York Times features a harrowing profile of Liu Jingyao, the 22 year-old University of Minnesota student who has accused the billionaire founder of one China’s largest e-commerce companies of raping her.

The woman’s allegations—that in August, 2018, after an evening of heavy drinking, JD.com chairman Richard Liu followed her back to her Minneapolis apartment, forced her onto her bed, and sexually assaulted her—provoked a storm of indignation on China’s internet. But the outrage wasn’t for the reasons American readers in the #MeToo era might expect.

Times correspondent Li Yuan notes that China’s social media sided overwhelmingly with the tycoon against his female accuser. Online attacks on Ms. Liu (the two Liu’s are not related) have been vast and vicious; she has been called a slut, whore, gold digger and worse.

“It may be difficult for Westerners to grasp the scale and intensity of online shaming,” Li writes. “The Monica Lewinsky frenzy is a good comparison, had it taken place in the era of Twitter and YouTube in a country with 800 million internet users and no independent news media.”

Liu, the executive, was arrested by Minnesota police after the incident, detained for 17 hours, then allowed to fly back to China on a private jet. He has insisted that the sex was consensual. In December 2018, prosecutors dropped charges citing lack of evidence.

Li finds Ms. Liu living as a something of a recluse with her Yorkshire terriers in the same Minnesota apartment. She is by turns deflated and defiant—and still seeking a lawyer to help her press civil charges against the billionaire.

Li posits the Liu vs. Liu case sparked so much interest because it involves a young woman “accusing one of the country’s most powerful men of behavior that has long been ignored.” She asserts that “sexual harassment and assault are widespread in China, and elites face little scrutiny.”

That’s not entirely true for Richard Liu. The rape charges have stained his cherubic image. Since the arrest, he rarely ventures into public. Caixin reports that over the past several weeks, he quietly stepped down from leadership positions at multiple JD.com subsidiaries—although he remains firmly in control of its two key business units and holds an estimated 80% of the company’s voting rights. Equity analysts chatter endlessly about JD.com’s “key-man risk.”

Separately, Friday’s announcement that the U.S. and China have reached agreement on a “phase one” trade deal means that, as the year draws to a close, the list of eight predictions for the U.S.-China relationship I offered on Data Sheet back in January has held up pretty well.

A final note: This will be my last “Sino-Saturday” post for CEO Daily. In the new year, I’ll be peeling off to launch a series of China-related newsletters for Fortune. More to come on that. (If you’re interested, send me an e-mail.)

Phase one. The U.S. and China agreed to an initial trade deal on Friday, just in time to halt a new round of tariffs scheduled for Sunday. It is the first trade agreement in the U.S. and China's nearly two-year trade war. Trump agreed to reduce tariffs on $360 billion of Chinese goods and postpone tariffs on $160 billion of products that include popular Christmas gift items like toys and video game consoles. In return, Washington expects Beijing to commit to purchasing U.S. farm products, energy, and other goods. The agreement will be signed in early January and take effect 30 days later. New York Times

Skeptical stocks. Stock markets soared on Friday in China after Thursday night reports that Trump would sign a "phase one" trade deal. Hong Kong's benchmark Hang Seng Index and the Shanghai Composite index saw their best one-day gains in months. But by Friday in New York, when the details of the deal were released, the S&P 500 and Dow Jones Industrial Average had ceded earlier gains and yields on government bonds fell. "This deal is an emaciated deal—it isn't even skinny," a risk consultant and former Obama administration trade official told Fortune. "There's so much work to be done. There's some stability. There is no victory." Fortune

Decline and fall. iPhone shipments to China plummeted 35% year-on-year in November, marking a second month of double-digit decline for the popular Apple product, in spite of significant discounts on the new iPhone 11 for Chinese consumers. Apple faces fierce competition from Chinese smartphone makers—it ranks fifth in market share in China, after four domestic brands, with Huawei at the lead. iPhone shipments to China fell 28% YoY in the third quarter while Huawei's rose 66% for the same period. One bright spot for Apple is that the "phase one" U.S.-China trade deal halting Dec. 15 tariffs saved the company from a 15% levy on iPhones, iPads, and MacBooks in China. TechNode

Mining operations. Bitcoin miners in China make up 66% of global processing power for mining, according to a new report from London-based CoinShares. The southwestern region of China's Sichuan province alone makes up half the global mining power. Other bitcoin mining hotspots in China include Inner Mongolia and Yunnan. China's relatively cheap electricity attracts bitcoin miners, even as the central government cracks down on private cryptocurrency exchanges and regional officials pledge to pull their support for the crypto mining industry. TechNode

Censored. Financial information provider Refinitiv has been blocking Reuters stories about the Hong Kong protests from its distribution platform Eikon in mainland China. Reuters news stories are distributed to investors throughout the globe by Refinitiv, which was owned by Thomson Reuters Corp until last year, when private equity firm Blackstone bought a majority stake in it and rebranded it. A Reuters news investigation found that Refinitiv had set up an automated filter that classified over 200 stories about the Hong Kong protests, plus other stories that could be deemed critical of Beijing, as "Restricted News," which made the stories inaccessible to users in mainland China. Refinitiv provides nearly half of Reuters' revenue, and generates tens of millions of its own revenue in mainland China. Reuters

Macau. Next Friday marks the 20th anniversary of Macau's Dec. 20, 1999 handover from Portugal to China. Chinese President Xi Jinping will visit the city next week to celebrate the anniversary and announce a raft of economic policies to diversify Macau's casino-dependent economy—and, some say, to provide a financial alternative to Hong Kong if unrest starts to affect its status as a global financial hub. Like Hong Kong, Macau is a special administrative region of China, but the city—whose population is around ten times smaller than Hong Kong's—has not seen any anti-government protests like the kind that have roiled neighboring Hong Kong for half a year. Some Macau officials and executives see the new financial policies as a "reward" for the region's political stability. Reuters