The Best Things Restaurants Did in 2019 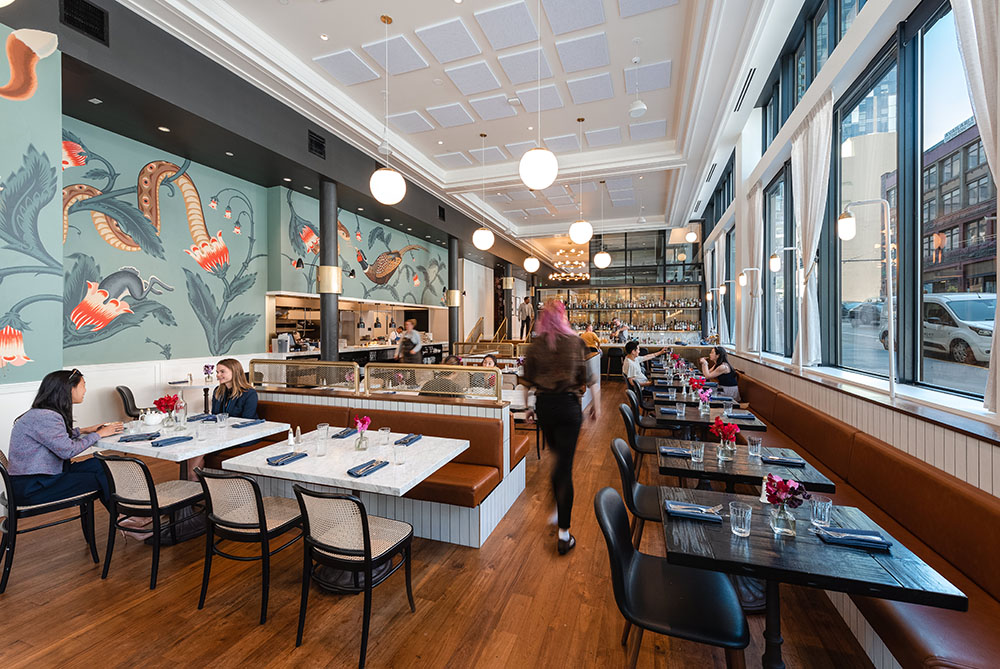 This year set a table full of amazing restaurant trends, including the continual improvement on toast, the way big ideas took shape in tiny spaces, and how high-end hot pot exploded all over America. And over the course of 2019, tons of incredibly talented restaurateurs, chefs, bartenders, and culinary businesspeople came up with ways to improve our eating experiences.

Here are five of the best things that restaurants and related business did this year—and that they hopefully plan to do a lot more of in the future.

It takes two (or more)

Like the concept of supergroups in the music world, the top women of the restaurant world paired off and powered up this year. In Los Angeles, local Jessica Koslow of Sqirl worked with Gabriela Cámara of San Francisco’s Cala and Mexico City’s Contramar to launch Onda.

The Fish Hiding in Kelp served at Onda, a restaurant described as a “conversation” between sister cities Los Angeles and Mexico City.
Onda

Perhaps the year’s most anticipated restaurant, it brought together two cities, two styles, and two cuisines into one incredible space. In Washington D.C., Carlie Steiner and Anna Bran-Leis each operate their own restaurants (Himitsu, now known as Pom Pom, and Taqueria Del Barrio), but came together to open a cheery, friendly neighboring spot, Dos Mamis.

And just squeaking in before the end of the year, four of Detroit’s best-known restaurateurs and chefs—Ping Ho and Sarah Welch of Marrow and Kiki Louya and Rohani Foulkes of Folk—formed a group called Nest Egg and opened wine and seafood spot Mink.

Wallpaper is no longer an afterthought

Statement wallpaper has been big at restaurants for a long time, but 2019 took it to the next level—looking good enough to eat.

At San Francisco’s Che Fico Alimentari, the more casual offshoot of last year’s hit, Che Fico, the delightfully patterned wallpaper’s rosy rosettes in the center of the diamond pattern are all made of various meats and charcuterie, referencing the restaurant’s star product.

Across town, the restroom wallpaper of Breadbelly, which specializes in Asian and Asian-American pastries, features durian, cherimoya, mangosteen, and other treasured fruits of Southeast Asia.

A visit from the bar cart at Ben Paris.
Ben Paris

Seattle’s Ben Paris features a whimsical sea creature mural in the dining room, but the connected hotel lobby wallpaper was inspired by the famous Pike Place Market—among other things—especially the seasonal produce and local seafood.

Incubators are not just for tech startups

From Tuscaloosa to Tacoma, everybody is sick of food halls—especially the watered-down, overhyped versions that have been pushed out en masse around the country. But there is one genre of food hall that is picking up steam and still getting everybody excited: culinary incubators for entrepreneurs struggling to get access to the resources needed to start businesses.

Fisher’s Test Kitchen in Indianapolis and BLVD MRKT in Los Angeles each operate some version of this idea, and the trend is only getting bigger. San Francisco’s La Cocina Municipal Marketplace, which focuses on chefs who are low-income immigrants and women of color, didn’t quite open on time this fall but should land early next year.

Around the same time, the Tukwila Village Food Hall just outside Seattle should open. Run by the Food Innovation Network, it provides a home for participants in the nonprofit’s program to help launch food businesses primarily by low-income refugee and immigrant entrepreneurs.

Most parents come well-packed with what they need to change their children’s diapers, but that doesn’t make it any less of a relief to walk into a bathroom and see that diapers and wipes are well-stocked.

As Asheville-based Tupelo Honey Café expanded to places like Boise, the company brought a bit of Southern hospitality along by keeping diapers in the bathrooms, as do tons of independently owned restaurants around the country like JuneBaby and Sen Noodle House in Seattle.

Similarly, places like Chicago’s Oriole and Seattle’s Harry’s Fine Foods keep menstrual products in their restrooms for customers. It’s a small notion that makes those who know that they might someday need one feel welcome.

As anyone who has been sober—whether temporarily due to pregnancy or health, or permanently—before about 2017 can tell you, restaurants did not used to care what you drank if you didn’t want alcohol. Beyond the standard soda gun, nondrinkers were pretty much out of luck.

But while that changed in recent years and a few nice bottled sparkling waters or mocktails popped up, this year brought a near tidal wave of both options and respect for the nondrinker’s beverage needs. Restaurants now brag about their house-made shrubs and sodas and keep kombucha on tap with the beer, and spirit-free drinks popped up front and center on cocktail menus—like hot NYC cocktail bar Existing Conditions, where they’re on the first page—finally released from the corner of shame in the back.