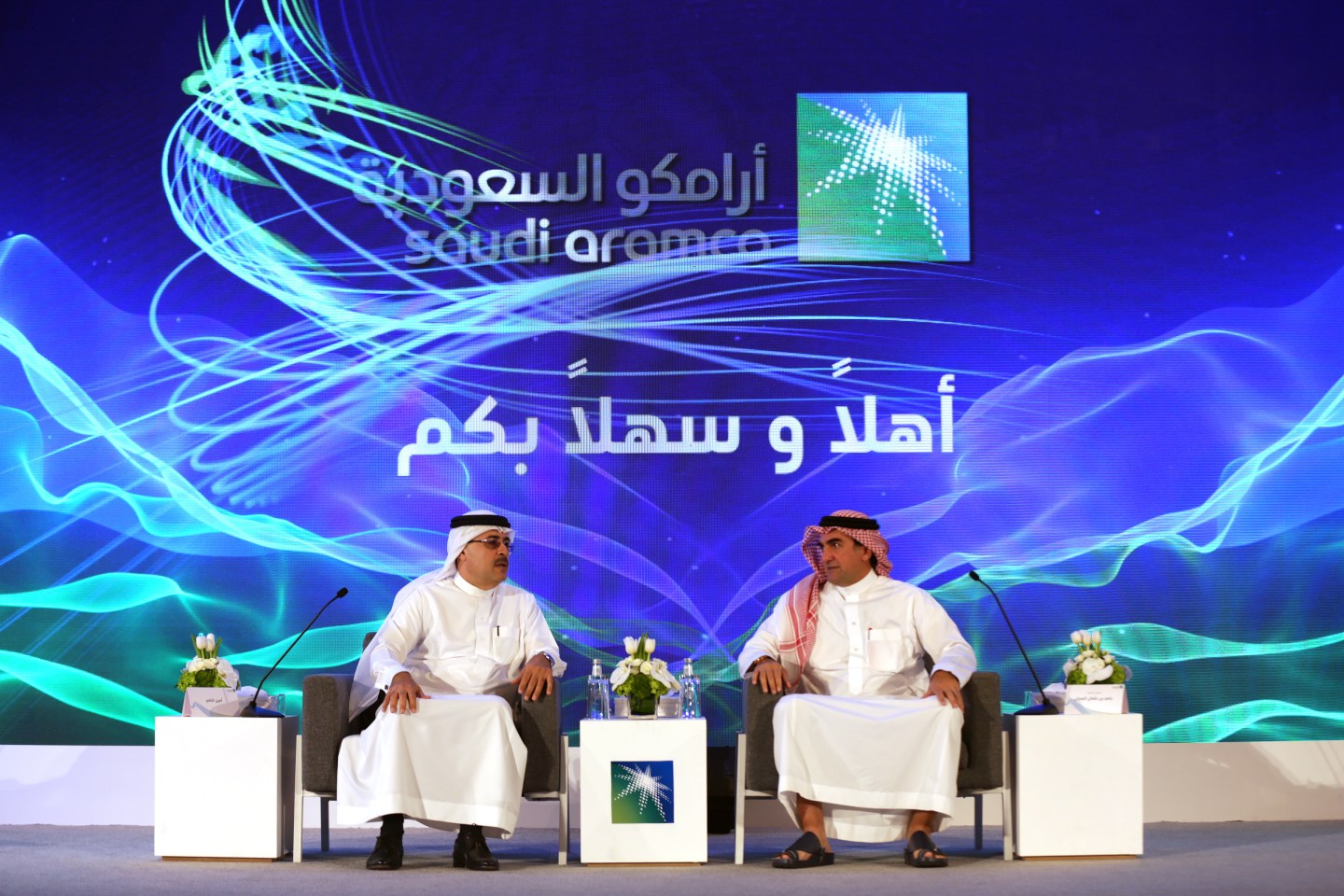 The Saudi Aramco IPO may be on pace to become the world’s biggest, but the apparent failure of the Saudis to attract significant interest from Western investors looms large at the moment, dealing a potential blow to Crown Prince Mohammed bin Salman’s ambitious plans to reshape the Saudi economy.

The geopolitical fallout is also coming into focus. The Saudis have faced a fair bit of disinterest in marketing the Aramco IPO to the West. That indifference could ultimately alter the axis of influence in the region—moving the kingdom away from the traditional ties to the U.S. and more towards China and Russia, some analysts say.

“It doesn’t mean that the relationship is going to shift away from the West overnight. This is part of a long, slow reorientation,” said Neil Quilliam, an associate fellow with the Middle East and North Africa program at London’s Chatham House think tank. One scenario Quilliam envisioned is the kingdom strengthening commercial ties with China and Russia, while remaining dependent on the United States to ensure its security.

“Financially, it is a blow”

The part-privatization of Aramco, the “crown jewel” of the Saudi economy, has long been the centerpiece of Prince Mohammed’s “Vision 2030” programme, unveiled in 2016, a grand plan to modernize the Saudi economy, reduce its reliance on oil and open the way for foreign investment. At the time, there was speculation, fuelled by the Saudis themselves, that Aramco was a cinch for a $2 trillion valuation.

In recent months it became clear that would be too lofty a figure, and so the Saudi government abandoned efforts to market the world’s biggest oil producer outside the Gulf region. It also decided to scale back the offering from an anticipated 5% of Aramco shares to just 1.5%. Both moves were a symbolic and real setback to the kingdom’s economic reform plans.

“They were hoping to raise about $100 billion,” said Quilliam, a figure they almost certainly won’t hit now with the Aramco listing. “And they do need money.”

“Financially, it is a blow (and) it is a blow to (their) international prestige. It means that Aramco hasn’t been valued at $2 trillion,” he told Fortune, adding that’s a setback too for the “Vision 2030” plan.

That’s not to say the offer hasn’t been a success locally. Individual Saudi investors and institutional investors combined have bid more than $44 billion, lead manager Samba Capital said on Friday. Even if not all the bids are accepted—undoubtedly the case— that would still be enough to smash Alibaba’s record-setting $25 billion IPO from 2014—even without the “greenshoe” option kicking in.

The offering is now closed for individuals, but the deadline for institutions to apply is Dec. 4.

No matter what happens, the results will fall short of the biggest expectations raised back in 2016 when Prince Mohammed first went public about his dream of floating part of Aramco, ideally on an international exchange. But the requirement to disclose detailed business information and the risk of greater legal scrutiny reportedly dissuaded Aramco from seeking a New York listing.

The idea of an international listing has been parked, at least for now, and Aramco shares will instead be floated on Riyadh’s small Tadawul exchange. Saudi authorities earlier this month were targeting a valuation of $1.6-$1.7 trillion.

“I think if the Crown Prince wants to proceed with his modernization, then it is important to move forward with an international dimension, or international IPO, or at the very least, instead of that, sell a bigger stake of Aramco privately,” he told Fortune.

Political analysts believe the lukewarm reception for the Aramco IPO in the West is at least partly explained by the damage caused to Saudi Arabia’s reputation by the murder of journalist Jamal Khashoggi at the Saudi consulate in Istanbul last year, Saudi involvement in the war in Yemen and the detention of Saudi women’s rights campaigners last year.

“There is concern in the way that policies are being made, or decisions are being taken, and that has really undermined confidence in his (Prince Mohammed’s) ability—but also in the kingdom’s ability to deliver against what it set to do,” Quilliam said.

He reeled off a number of other events he believed had damaged Saudi Arabia’s reputation internationally, including the detention at Riyadh’s Ritz-Carlton hotel in 2017 of dozens of princes and top businessmen caught up in an anti-corruption crackdown.

Balking at the price

Some international investors were also put off by the high valuation the Saudis placed on Aramco. And then there’s the growing backlash against fossil fuels that contribute to global warming and geopolitical tensions.

Aramco’s vulnerability was laid bare in September by a drone attack on two of its installations that briefly knocked out half of Saudi oil production. The Yemeni Houthi group said it carried out the attack but Washington and Riyadh blamed Iran, Saudi Arabia’s regional rival. Iran denies the charge.

But Saudi Arabia has struggled to attract foreign investment in recent years, a market reality that worsened when oil revenue plunged following the collapse in prices in late 2014. The kingdom’s budget deficit, meanwhile, is set to rise to $50 billion next year from $35 billion this year.

Other indicators paint a bleak picture of the kingdom’s ability to draw in foreign investors. The U.N. Conference on Trade and Development said in its “World Investment Report 2019” that flows of foreign direct investment (FDI) to Saudi Arabia had risen from $1.4 billion in 2017 to $3.2 billion in 2018, but remained sharply below the 2008 peak of $39 billion. “Political factors and lower oil prices were largely responsible for lower than usual FDI flows to Saudi Arabia,” it said.

Meanwhile, Saudi Arabia has faced strong international criticism of its human rights record, even as it has made some reforms, such as lifting a ban on women driving.
Human Rights Watch said in a report this month that scores of clerics, academics, intellectuals, women’s rights advocates and writers had been arrested at different times since Mohammed bin Salman became crown prince in June 2017.

Quilliam said Saudi Arabia hoped to use its year-long presidency of the Group of 20 nations starting next month as an opportunity to “reset” its image by attempting to resolve three major issues that have stained its reputation—the war in Yemen, its two-year standoff with Qatar and the detention of the women’s rights activists.

The Saudis, Chinese and Russians

One eager participant in the IPO is China with the country’s sovereign wealth fund and state oil companies reportedly set to take a stake in Aramco. China is already Saudi Arabia’s leading trade partner, number one for both imports and exports in 2018. And the two countries signed an economic cooperation pact worth $28 billion. And earlier this month, Saudi Aramco signed crude oil sales agreements for 2020 with five Chinese customers this month, increasing volume by 151,000 barrels a day and strengthening its position as China’s top crude supplier.

Steffen Hertog, an expert on the Gulf, told Fortune that China-Saudi commercial links had been strengthening rapidly. He expected this trend to continue even if he did not see a fundamental geo-strategic shift.

“China has no interest in projecting hard military power in the Gulf for the foreseeable future. The U.S. are the main game in town. So I see continued deepening of commercial relations (with China) but also continued strategic dependence on the U.S., even if Saudi Arabia is much less comfortable with that than they used to be,” said Hertog, an associate professor in the Department of Government at the London School of Economics.

—The stock market has hit 19 new highs in 2019 alone. Why?
—The 2020 tax brackets are out. What is your rate?
—How “VSCO Girls” are killing makeup sales
—What is “quantitative easing”—and why is everyone so worked up about it?
—What powered such a great decade for stocks? This formula explains it all
Follow Fortune on Flipboard to stay up-to-date on the latest news and analysis.