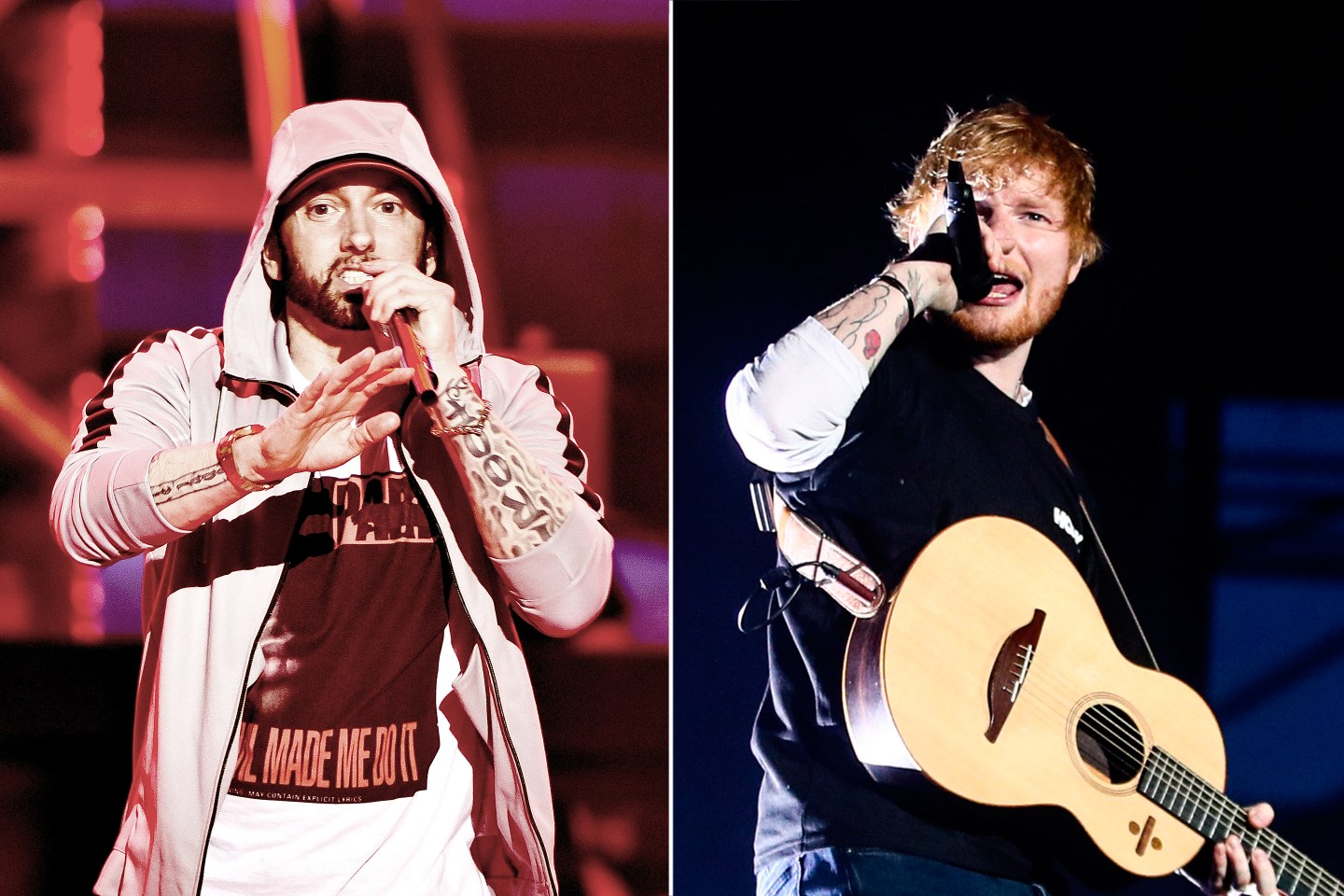 Finding success at work may be as simple as taking a lesson from Ed Sheeran and Eminem, according to new research.

On the surface, the two performers don’t seem like obvious collaborators, however in the past year, Sheeran and Eminem have released two songs that have racked up countless hours of radio air time and hundreds of millions of streams across YouTube, Spotify, and other platforms.

But the collaborator effect isn’t just contained to Sheeran and Eminem. Researchers at Macquarie University in Sydney, Australia analyzed the top 200 songs streamed on Spotify in the U.S. between December 2016 and October 2018. It turns out that songs featuring collaborations regularly outperformed solo projects, recording a 13% bump in the first week, and an overall 5% increase overall compared to other tracks.

Need more proof? Post Malone is a regular at the top of the charts, but the artists’ best performing songs on Spotify are actually the ones with collaborators, according to the study.

This kind of teamwork can also help you win over new fans in the office, experts say. Or in the words of Marvin Gaye and Kim Weston: “It takes two, baby!”

“Fundamentally, there has to be value from the collaboration, whether it’s music demand or business objectives,” Jordi McKenzie, associate professor in the Department of Economics at Macquarie University, and one of the authors of the study, tells Fortune. “As an academic researcher, I often seek to work with people who have different skill sets to my own in order to produce better research. Accountants, lawyers, IT professionals, etc., do the same within their own industries to achieve better outcomes.”

Therese Gedda, founder and CEO of 30MinMBA, a workplace culture and executive coaching company, tells Fortune that collaboration across organizations can be when “the magic happens.”

However, she says it’s crucial that two collaborators are aligned with what they want to achieve together, if they want to work in perfect harmony. For instance, Eminem and Ed Sheeran shared ideas, tried new things, and ultimately went into the studio together to record songs that appeal to both of their fan bases.

“The creative process is not going to be linear, so applying techniques like saying, ‘Yes and,’ rather than applying criticism when new ideas are presented is crucial for a warm, creative, and collaborative environment,” Gedda says. “It can be easy to criticize when someone is presenting something new or outside the box from what you are used to—which makes it essential to establish how the collaboration will take place before the project starts.”

Tech can bring people together

Technology can also play a pivotal role in helping people find new collaborators, and facilitating their work together, no matter where they are in the world.

In a global company, chat tools such as RemoteHQ, Whereby, and Slack can be a net positive for increasing collaboration, according to Gedda.

“In a people and purpose-centric company culture, various forms of partnership will naturally occur, but it’s still important to encourage team members to work together outside their regular roles if this is an essential priority for the company as a whole,” she says.

Technology is also helping up and coming stars discover each other. For instance, British rapper Crooks left comments on Billie Eilish’s Instagram. The two ended up collaborating on the song “Bury a Friend” on Eilish’s debut album.

“Technology, of course, has evolved in many ways to facilitate and promote collaboration.  Social and business networking sites have been particularly important in this respect,” says McKenzie. “However, at the end of the day it’s all about people.  There has to be common and shared objective and values—technology can’t replace this.”

The danger of being DJ Khaled

DJ Khaled may be the king of collaboration. Between 2016 and 2019, he released three albums with 52 tracks, each containing one feature artist. And if history is any indicator, he’ll likely drop “another one” soon.

While it works for DJ Khaled, collaboration doesn’t always guarantee a hit. According to the study, Drake’s solo songs outperformed his collaborations, for example. In other words, collaboration can be a net positive, but both experts say it’s important to be strategic about the chosen partners and projects—and for each person to make sure they have some time of their own in the spotlight, too.

“In music, artists might fail to establish their own brand and fan base by too much collaboration, or weaken an existing fan base,” McKenzie says.

Similarly if someone always works as part of a collaborative team, it might be difficult to evaluate their individual skills and abilities, he adds.

And ultimately, too much collaboration can be bad—especially for artists. “There is the risk of being perceived as selling out,” McKenzie says.

—How the best workplaces are winning over employees with parental benefits
—What the best workplaces in the world have in common
—How to create benchmarks when you work for yourself
—5 proven ways to decrease stress at work—Ready to jump at that great job offer? Read this first